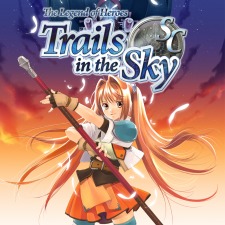 The Legend of Heroes: Trails in the Sky SC (for Second Chapter) is the second game in the long running Trails series from Nihon Falcom, which as been expertly localized by XSEED Games.  The series is currently on its seventh game, with the eighth one recently announced to be in development.  (Currently only three are available in the west.) This series is fairly unique among RPGs for a few reasons, but the main one is that each entry is a true sequel to the one that precedes it.  Trails SC takes place minutes after the end of the first game in the series, Trails in the Sky (FC is sometimes appended, meaning First Chapter, to keep them straight).  Very few games do this.  So, if it is not obvious:

Do not play this game until after you have completed The Legend of Heroes: Trails in the Sky FC!  We actually have two reviews for that game, one written by me, and one by ccgr.  Please read them here and here.  The rest of this review is going to assume that you are familiar with the series by either having already played the first game, or by reading the reviews above.

Taking place just a few minutes after FC, Estelle wakes up in Grancel castle, shortly after the dramatic cliffhanger ending.  Being without her adopted brother and budding boyfriend Joshua, she decides to take the opportunity to grow in her training and as a person and takes a trip for her Bracer Guild (which is a mercenary police force) training.  After completing this, Estelle and her friends begin to investigate the mysterious happenings taking place all around Liberl.

In the process of dealing with these and the other world altering events that follow, you get the privilege of seeing Estelle grow up as a person in a really remarkable way.  She has this amazing ability to speak the truth to all people – friends, enemies, and people of power – and reach the root of the matter and get to their hearts.  Seeing not only her growth, but those around her is a joy to behold.

Similar to Trails FC, SC does a fantastic job of building the world, such that you come to care about nearly every NPC and character in the game.  Building on top of the introductions made in FC, you get to see friendships grown, children grow up a bit, hoodlums shape up, people get married, and more.  The amount of character growth in this game is simply astounding. 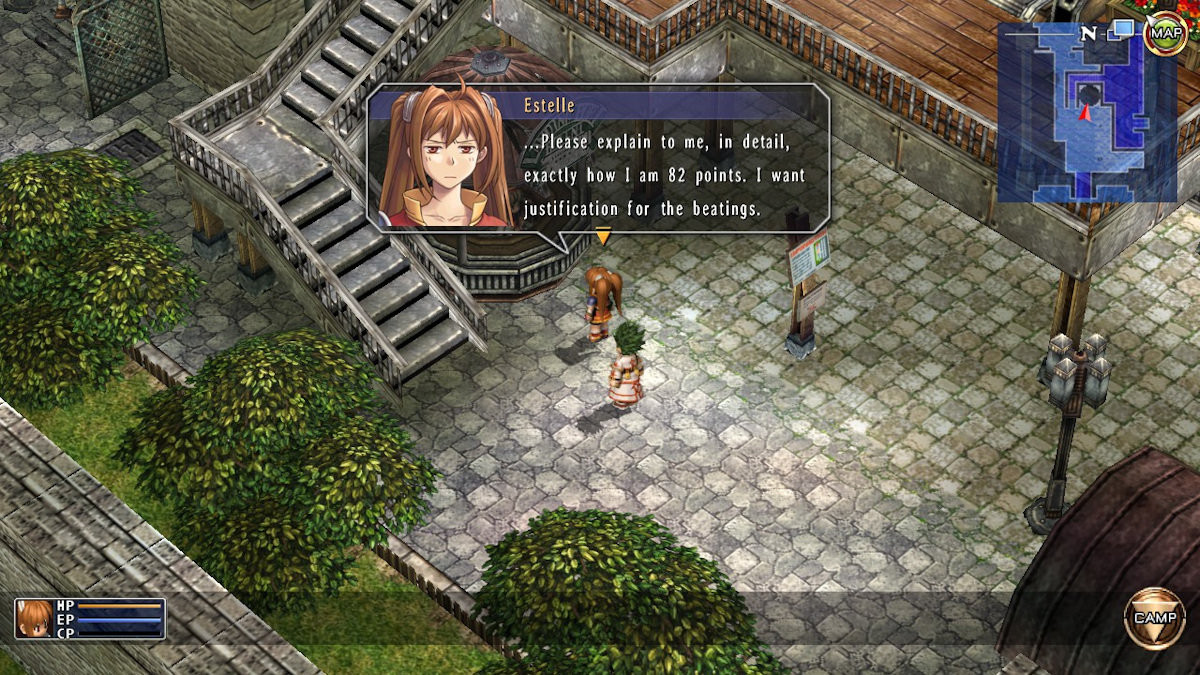 Strong Points: Fantastic world building, storyline, and characters, that you come to deeply care for (even NPCs!); the main character Estelle grows into an amazing person; fun battle system; fantastic music; very long adventure; does a great job of wrapping up Estelle and Joshua's story
Weak Points: You must play Trails in the Sky FC first to understand the story; plot takes time to build
Moral Warnings: Cartoon violence, with occasional spurting blood; Some swearing, including d*mn, h*ll, wh*re, b*tch, sh*t; Alcohol use shown, and reference is made to the 'power of alcohol'; one character is bisexual, and some of his lines are loaded with innuendo; a female character uses her 'assets' to convince a guard to break the rules; at least one female shows off significant cleavage; the main characters from the previous game, adopted brother and sister, grow in their romantic relationship; priest character hits on girls

The main story and plot is also very interesting and engaging.  You have to deal with not only the aforementioned mysterious occurrences, but also the Society of Ouroboros, which turns out to be a very fascinating process, leading to many revelations central to the plot of both games.  I wish I could tell you more – this story and especially lore is so good that it's hard not to want to talk about it – but to do so would lead to massive spoiler territory.  Suffice it to say it's fantastic and worth the ride.

The gameplay battle system is mostly the same, with a similar structure where each player is on a battle map, and each creature moves closer to attack.  This allows various strategies based on location, as most attacks have some kind of range, as do characters themselves.  There is also the turn bar on the far left, which shows which characters are next in battle, and what order.  There are skills that can manipulate that, as well as the bonuses that are granted to whatever character's turn that happens to be when that slot is up for an action.

The newest additions to the battle system are the chain crafts, and higher level arts.  Early in the game, you learn that scientists have improved orbments, such that you can each use an additional orbment slot.  Arts are like spells; combinations of orbments (and EP) are required to cast them.  There are also new arts available.  Very handy.  I particularly like the arts that hit everyone on the field, like Titanic Roar.  Chain crafts are ways where one player can tell multiple members of the group to attack at once.  While each hit isn't always that much stronger, it can really help a lot if an enemy is killed off, or if the character initiating the chain craft has a critical or strength up bonus, so they can stack it to great effect.

The graphics are very similar to FC; that is to say, very nicely styled artistically, but not cutting edge even back when it was originally released in Japan in 2006.  They have aged well, though.  XSEED was able to incorporate high resolution artwork for almost all of the game's still images, which looks fantastic.  I only found one place where a higher resolution image was missed.

XSEED has done a great job making Trails work well on modern PCs, including high resolution and Xinput support.  I did experience some rare bugs with controller input near the end of the game, and had to reach over to my mouse to get past them. Also, a few of the achievements are broken for me.  It's a shame, since I should have been able to earn all of them, and I've never 100%'d a game before with Steam achievements.  (Though the fact that I would like to should say something about this game.)

The music; oh the music.  Falcom is known for truly excellent soundtracks, and this one most definitely qualifies.  Many of the tracks are reused from Trails FC, and were great then.  The new ones are of such a high quality that I found myself just shaking my head in admiration a few times.  I just don't know how anyone can keep consistently bringing out such great game music.

With all of that well-deserved praise, a few things are necessary to say here. First of all, there were a few bugs as mentioned previously, mostly with a rare controller bug and with some achievements not working.  But the main issue is not technical; it's appropriateness. 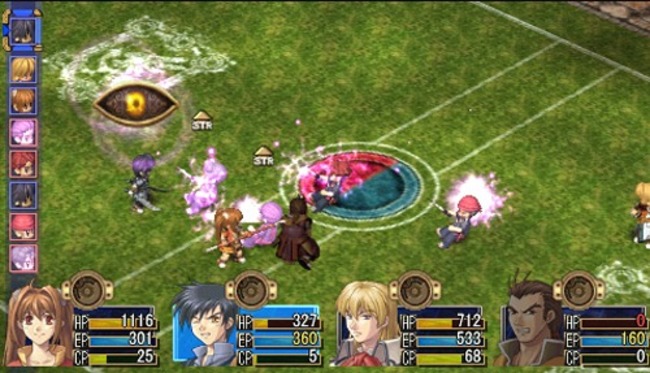 There is a fair amount of foul language, though thankfully you can tell that the translators restrained themselves a lot better on that front.  There are some 'heck's, and some 'h*ll's.  Even by the same character, which I found somewhat odd. The words 'd*mn', 'sh*t', 'b*tch', and 'godd*mned' were used.  (The last one is doubly odd since there is no God in the Trails universe, only a goddess.)  There are also some interesting replacement words used, mostly by one character, though which word used changed as well.  There is “fuggin'”, and “friggin'”.  There was also the infamous symbols (@!#$) used once.  The word 'wh*re' is also used.

The characters in the game also do some odd things.  There is of course Olivier, who is often just crazy.  Almost nothing seems off limits, to the great irritation of those around him.  With his 'hunter of love' persona, he casually makes sexual jokes, with both women and men, often dripping with innuendo, again, even with male characters.  Some of the character reactions to him are quite hilarious…

Another character, Scherazard, uses her 'womanly assets' as a 'weapon' in one case, as she convinces a guard to let them past when it could cost him his job.  She also wears revealing clothing with large amounts of cleavage.  In another case, a priest, Kevin, hits on girls in the most humorously epic fail way possible.  It is unclear in this game if priests are supposed to do that.  And, like FC, Estelle and Joshua, adoptive brother and sister, solidify their boyfriend/girlfriend status.  It's a different world, so we can't be sure what their cultural/religious laws are, but it is what it is.

Also like FC, there is a deity Aidios, who is very similar in a lot of ways to our Christian God, with Catholic-like traditions, except that she is a goddess.  There are churches in every town, and people are more or less expected to go to church regularly.  Everyone, from the good guys to the bad, accepts Aidios as a reality, and no one really questions the benevolence of the church.  In one sense, perhaps it is a parallel to what Christianity may have been viewed like in the past in certain places and times.

Other supernatural references include talking about dead people meeting Adios in the sky, condemned sinners falling into darkness in Gehenna (that word is used in place of hell), and there are also Testaments in the church, which appears to be some kind of scripture.  They also mention ghosts being bound to something or someone.

There is also plenty of reference to alcohol, though perhaps less actual drinking than the last game by player characters.  The 'power of alcohol' is also talked about.  One character also smokes tobacco.  Battles include RPG-style violence, with a some cases involving blood sprays.

The Legend of Heroes: Trails in the Sky SC is honestly one of the best RPGs I have ever played from a purely game enjoyment perspective.  I put in over one hundred and forty hours, though it could have probably been a lot less if I wasn't so meticulous.  The characters are memorable, the story is fantastic, and the music is at times breathtaking.  It is certainly not without flaws; the story is a bit slow going at first, and there are many appropriateness issues to hold it back.  Despite the graphics appearing to be mostly child safe, I do not recommend this game for children at all.  If you are wondering if this game is an excellent follow-up to Trails in the Sky FC, the answer is most definitely yes.  If you are asking for a recommendation for Christian gamers, please consider the content as described above before making your decision.