Back in 2008, Aksys games developed From the Abyss, a basic dungeon-crawler DS game, and released it to mixed critical reception. When the DSi shop began gaining steam, they released miniature versions of their game as the Anonymous Notes series: stripping away the story in favor of a pick-up-and-play dungeon-crawler format.

The stories of Chapters 1 and 2 follow adventurers Raid and Rita, respectively, as they travel through Abyss Gates to parallel dimensions.  Each dimension is a randomly-generated dungeon, and each is filled with enemies and loot. Adventurers who brave their way through these dungeons face a monstrous boss at each one’s end. Defeating the boss unlocks a powerful weapon or rare item and another dungeon.

While this may sound like a winning formula for a dungeon crawler, it proves to be the game’s undoing: everything is entirely too repetitive. Dungeons follow the same basic layouts with slightly different aesthetic designs. Around twenty-five different enemy designs draw variety from varying color schemes, and enemy attacks boil down to charging, running away, and using magic. The dungeon bosses even repeat: each one is exactly the same as the last, just in a different color.

Throughout the player’s time in the dungeon, the touch screen is used to manage the inventory and skill shortcuts, view the dungeon’s map, and check the adventurer’s stats. While the map function works fairly well, and managing skills is easy and efficient, the item screen delivers a huge blow to the game’s already-questionable flow. Flipping through a poorly-designed inventory to use items is tedious, and requires concentration on the bottom screen, taking the player away from the action since the game can't be paused without closing the DS. Staying in the action  is key to enjoying Anonymous Notes, so anything the game does to pull players out of it does far more harm than any possible good. 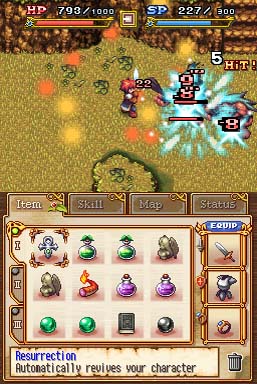 Between each of these dungeons, players find themselves waiting outside of the Abyss Gate with Helen, the gate’s guard and the player’s personal storage container. She can also save the game from the gate, though not during the dungeon. Helen holds short conversations with Raid and Rita, sometimes revealing helping tips and sage advice, and other times sprinkling humor on the otherwise bland and stereotypical story.

In keeping with the trend of under-realization of the rest of the game, the combat is shallow and repetitive. Players can wield swords, bows, axes, lances, and staves, and utilize skills and magical spells to take out the ravenous enemies. Attacking boils down to tapping “A” rapidly until enemies die or get knocked too far away to hit. Magic adds a little variety, but long charge times and imprecise aiming controls severely dampen its potential.

To collect all of the magical spells and skills in the game, players use the one skill they start with: Soul Capture. As the name implies, using it on weakened enemies captures their “souls,” causing one of several effects. Sometimes it heals the player, other times it poisons or curses the player, and still other times it vanishes in a puff of smoke and glitter. With some luck, however, the soul teaches the player one of the many skills and magical spells available in the game. Utilizing Soul Capture is imperative to succeeding in Anonymous Notes, so it’s a shame that it takes up one of the three usable skill slots, leaving only two for players’ favorite magical spells and weapon skills.

The biggest hole in the combat formula is also one of the biggest failings in the entire game: there is no leveling system. No matter how much players fight, or how many enemies they kill, they are only as strong as their armor and weapons. This severely hurts the dungeon-crawling formula: grinding to surpass high-level dungeons boils down to killing enemies and hoping that a powerful weapon falls from the sky. 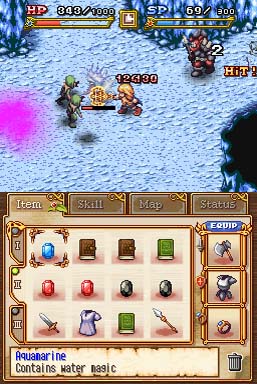 Fortunately, these two games share one very interesting mechanic: both games rely on the same save files. So, if a player gets phenomenally far through Raid’s story in Chapter 1 and hits a snag on a hard boss, the same save file can be loaded into Chapter 2,  and the player can slaughter with an over-powered Rita while searching for improved armor, items, and magic. The shake-up helps make the lack of leveling a little more tolerable, but it’s more of a bandage on the wound than a full treatment.

Anonymous Notes utilizes a very basic anime art style: it’s not exactly breathtaking, but it is fairly enjoyable. The sound quality is along the same lines: the typical “grunts” and “groans” associated with swinging weapons or getting hit, and a stereotypical adventurous tune to add some background noise.  Neither elements take anything away from the game, but they also don’t add anything to the experience.

In typical Japanese style, Helen wears slightly revealing clothing, though Rita and Raid are both appropriately dressed. As mentioned before, magic is used as a main combat element for both players and enemies, though beating them to death is a more effective combat option, and Soul Capture utilizes possession to both hinder the player through weakening curses and help the player through health-regeneration.

For all of its faults and failings, Anonymous Notes has one really good thing going for it: it’s cheap. At $2.00 a pop, its easily worth the mild distraction each game provides. Even though it's a stripped-down version of a mildly-received game, you get what you paid for: a quick game to keep you slightly entertained until the next big title comes out.