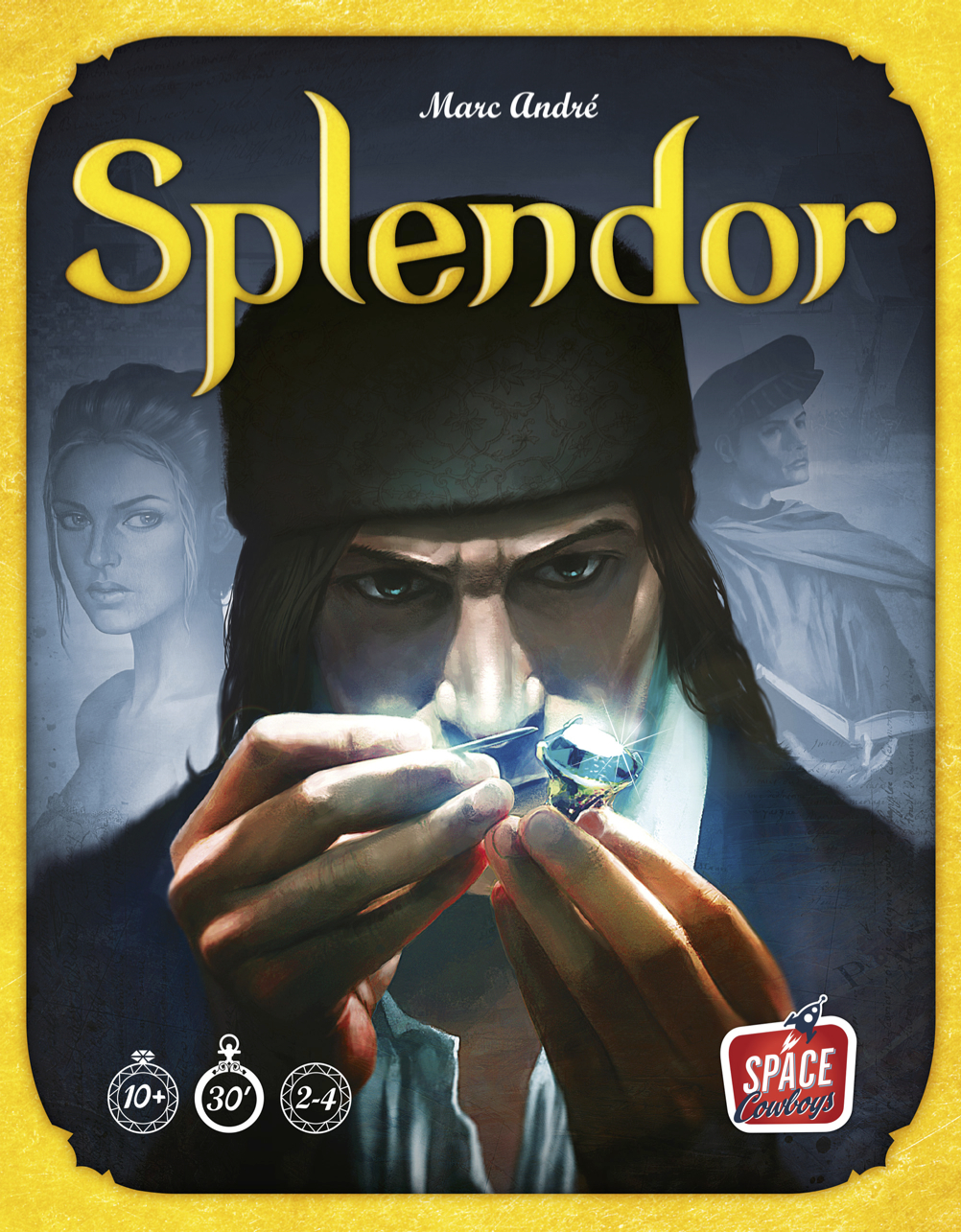 Thank you, Days of Wonder, for providing a copy of this game to review!

Splendor is a fast-paced card game introduced in 2014 by the French game company Space Cowboys. The game won several awards, including the Origins Game of the Year Award. Now, with the assistance of Days of Wonder, Splendor can be played in an electronic format on Android and iOS devices. Its release on Amazon (so it can be played on Kindles) and Steam are reportedly under development.

In Splendor, the player adopts the role of a merchant caravan specializing in jewels. The game consists of three decks of cards (representing common, uncommon and rare resources), a series of tokens comprising five different-colored gemstones, another series of tokens for "wild cards," and a collection of nobles. The number of nobles and available tokens varies depending on how many players are in the game, but the gameplay and goal is the same. The objective is to be the one with the most Prestige points at the end of the game – after one player received 15 points, each other player takes one more turn. 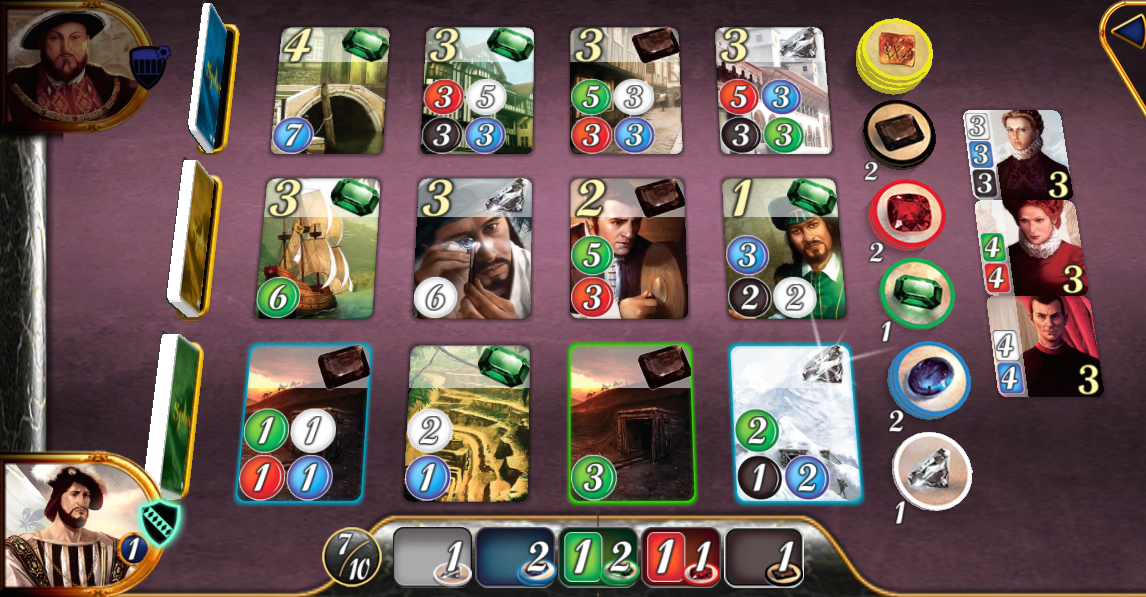 Each turn, the player must choose one of four actions: 1) draw three different tokens from the stacks of available gem tokens; 2) draw 2 of the same color gem token – but only if there are four or more in the stack; 3) reserve a card to purchase with gem tokens later – this also gives the player one of the five "wild card" tokens; 4) purchase a card with gem tokens. Each card sports a gem, which acts as a "bonus" token of that color and provides a discount off other cards. Some of the cards also grant prestige points. If a player has enough bonus points at the end of a turn, he or she also can get one of the revealed noble cards, which also provides prestige points. Each player can have any number of cards, but is limited to 10 tokens. Some of the rarest cards can only be purchased once the player has accumulated a few bonus points.

Turns are extremely short, and an entire game can be completed in 15-30 minutes, depending on the number of players. Multiplayer games consist of a "pass and play" format, with up to four players passing the tablet around to take their turns. There is no online play at this time, but that might change in the future. A solo player can compete against one to three computer opponents, and can even select their playstyles.  In addition, there are several "challenges" offered, where a player can try to meet objectives within a set number of turns. The game has achievements, and allows a connection to Google Play for those who want to show off their skills on their profile. It's likely safe to assume that similar functionality will be available with the Steam release.

The cards sport some very nice artwork showing mines, caravans and jewelers as they may have appeared during the European Renaissance. Likewise, the music has a nice, medieval or Renaissance sound to it. I may want to pick up the soundtrack, if it becomes available. However, sound effects are minimal, with a simple click of tokens or slight rustle as cards are dealt out and moved. Of course, there is no voice acting at all in the game. Also, despite the theme of the game, there is very little information about the history of the gem trade. There are a few snippets in the "challenge" mode, but history buffs wanting to learn more will be disappointed. 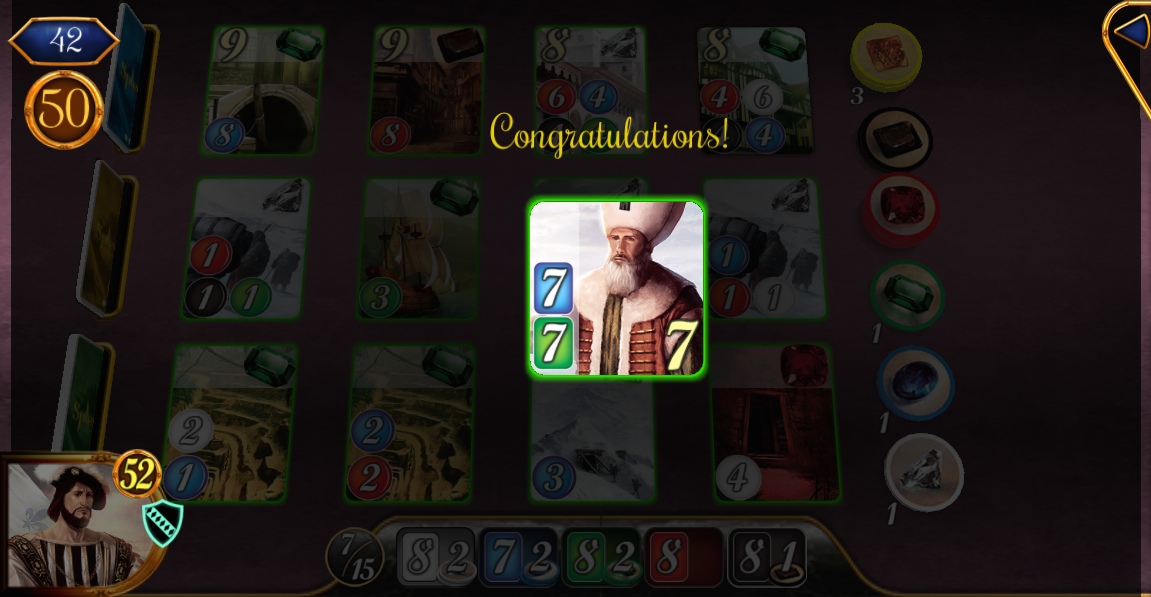 Splendor is an entertaining game, especially for card enthusiasts or those familiar with the printed version. While it might lack the tactile feel of the cards, the artwork is very nice and, along with the music, helps to capture the feel of the game's theme. The lack of online play is a bit disappointing, though. Still, it can provide a brief diversion on portable devices.

The music, while nice and thematically appropriate I found to be repetitive after a couple of sessions.  Additionally, at least on the PC, the musical score would abruptly restart.  I'm not sure if that was a glitch in the Matrix or something, but it did occur several times.

As with the Android version, there is not yet an online play option.  You can play a hotseat game, where you and some friends take their turns sitting at the computer, which admittedly works a lot better on a handheld device like the Android version.  Otherwise you can play against the AI.  The AI has several modes that you can set for your opponents like "Aggressive" and "Opportunistic".  You can also do "Secret" and "Random".

There are Steam achievements that can be obtained by meeting specific requirements as well.  Otherwise, the game functions well and offers a nice 15 minute diversion if you like card and board games, which I personally do.