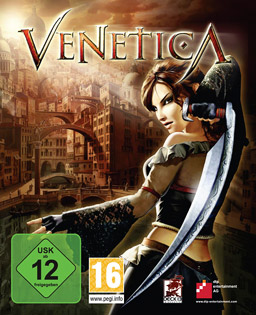 On the rare occasions that I sit down and play an RPG, I usually don’t expect that much. I’m an outsider in the RPG scene, and as such tend to view them through a less sophisticated lens. So long as I can understand the basics of the story and muddle my way through the combat, I’ll say my time was well spent. Yet when I play Venetica—a basic action RPG with a vaguely interesting premise—I can’t help but feel so…bad.

It’s not like it starts off poorly: you play Scarlett, Death’s daughter, on a quest to avenge her now dead lover and rid the world of evil. Questing, looting, moral choices, stabbing anything that looks at you funny, fixing everyone else’s mistakes and then stealing everything they own—all of the RPG standbys are accounted for. In fact, it seems like that’s all there is. As hard as I tried, I still couldn’t find an original idea in here. Some of the ideas, like the ability to go into the spirit realm, sounded interesting at first, but were never fleshed out.

While being unoriginal isn’t necessarily an awful thing, it’s very awkward in Venetica. Normally I’d be able to find something worth noting by the time I’m writing the review, but I really can’t think of anything that stood out. The combat wasn’t interesting, the moral choices were two-dimensional, and the game certainly can’t compete with any recent titles in terms of its presentation. 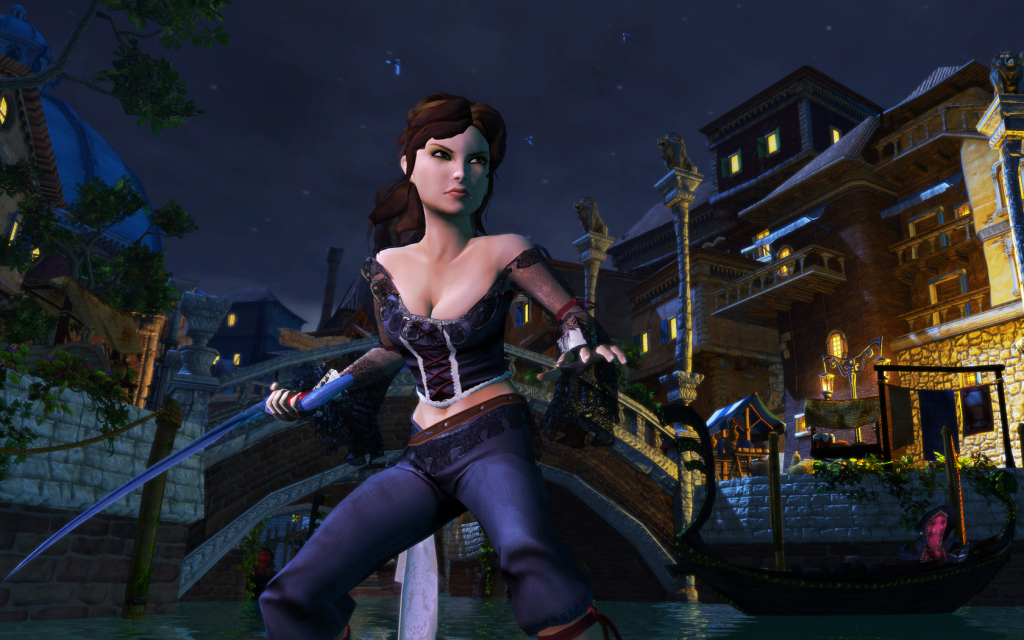 I take that back; there is something that I noticed: mediocrity. I can accept when a mechanic is done better elsewhere, but there have to be some redeeming qualities to balance the scales. There are none in Venetica. Everything that should be keeping me engaged and entertained just isn’t there. The combat is nothing more than dodging enemies’ lumbering swings followed up by a few sword strikes. Different enemies require other various strategies, but it rarely deviated much from the formula. I suppose one could argue that most action RPGs play like this, but those other RPGs are also enjoyable.

Then again, most RPGs have decent storylines too. Tales where the characters actually care about their predicament and the actors don’t speak in monotone. It seems like absolutely no one cares about the story in Venetica, and to be honest, I can’t blame them. With a good voice cast, the oddities and quirks would be bearable, but that’s certainly not the case here. Not only do the actors speak in monotone with amateurish European accents, but their seeming inability to show emotion makes the story a mess. Scarlett barely blinks when she discovers her ancestry and it’s almost as if it’s a normal occurrence for the townspeople. “Oh, you’re the daughter of Death? Meh.”

That attitude also carries over to the graphics as well, where not a single care is given to how anything looks. There were actually times I had to remind myself that Venetica doesn’t have cel-shading, it’s just bad texture work. The environments are passable for the most part, and animations didn’t make me cringe…occasionally. But hey, the skyboxes are pretty, and since half of the time I was staring at the sun, hoping to go blind, the game looked great for the most part. 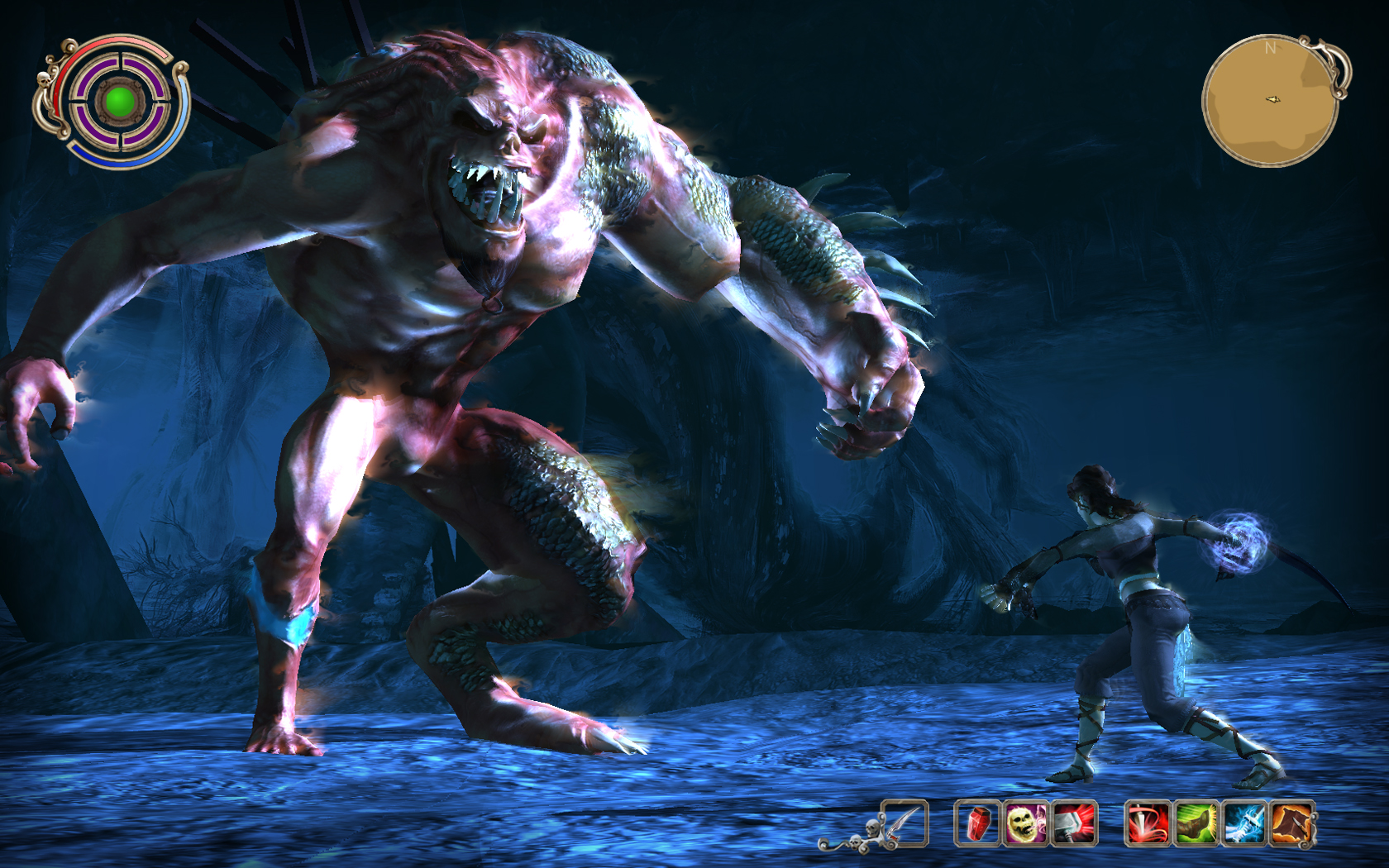 I suppose some of these problems could be forgiven since the game was released back in 2009 (in Germany), but I haven’t even mentioned all of the smaller issues. Text so small it’s illegible, items floating in midair, audio that sounds like it was recorded while tin foil was being crumpled in the background, choppy frame-rate, etc… The list just goes on and on, and I have to wonder if anyone on the development team even cared.

Most games have their fair share of annoyances, and that’s fine. As a reviewer, I can’t expect perfection. I enjoy games for what they are, and rate them accordingly, but Venetica makes it very hard for me to do so. It’s not broken or horrible, but it’s not exactly fun. At its core, Venetica is playable, but not very enjoyable.

While this title’s many flaws compose most of the problem, some of the blame could also be placed on the moral content as well. Unfortunately (but fortunately for me) I was unable to play through the entire game due to time constraints, but I did notice a few big problems, the main one being violence. It’s not gratuitous by any means, but there are a few cutscene where characters are stabbed with some accompanying blood. Also rather disconcerting is the magic and necromancy abilities that can be used by the player. Though it’s probably apparent after seeing the cover, Venetica also has some revealing outfits, but surprisingly, it’s actually the antagonist that wears the most revealing clothing. Cursing, while not common, is also present and a bit on the harsh side. Though not particularly concerning, it should also be noted that beer can be consumed.

I’d like to say that Deck13 Interactive tried to do something really ambitious, but they didn’t. They tried to do something too ambitious for them and failed horribly. While I’m sure there are people who will enjoy Venetica, I’m not one of them. It’s ugly, glitchy, tedious, and confusing. If, for some bizarre reason, you’re desperately in need of an action RPG, there’s probably enough content to hold you over. However, I don’t think anyone needs an RPG that  badly.