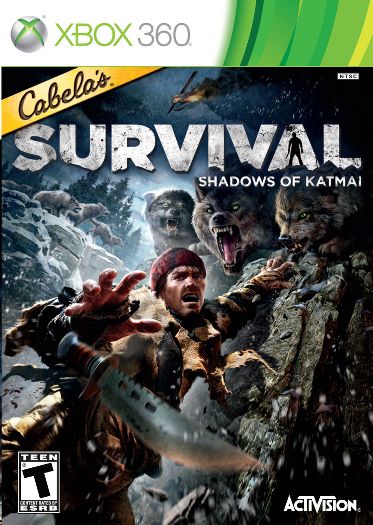 Note: As I was unable to acquire this title new, I will be unable to comment on the Top Shot Elite. Please consider this throughout the review.

Having played a few of Fun Labs hunting titles, I was as surprised as anyone when I originally saw the trailer for Cabela’s Survival: Shadows of Katmai. “What’s this, climbing? Third-person shooting? Why is there…oh…the Top Shot Elite” And there ended my enthusiasm. I already have way too many peripherals for my Wii gathering dust, and now I’m supposed to buy another for my Xbox 360? No thanks.

However, I’ve always had a soft spot for Alaska, and with this game being set in the harsh yet awe-inspiring wilderness that is Alaska, I simply couldn’t resist renting it. After taking some time to adjust to the loose aiming controls, sub-par graphics, and overall mediocrity, I actually began to enjoy its fast-paced action and ridiculous premise.

Shadows of Katmai begins with Logan James, the game’s protagonist, lying in the snow during one of the worst blizzards of the century. After playing through a flashback of your plane crashing, players are tasked with “fending off” the wolves that begin to attack and climb around the mountain to find shelter. After being rescued by a native to the mountain, Logan sets off to find the plane’s other occupant, Dr. West, and her mysterious cargo… 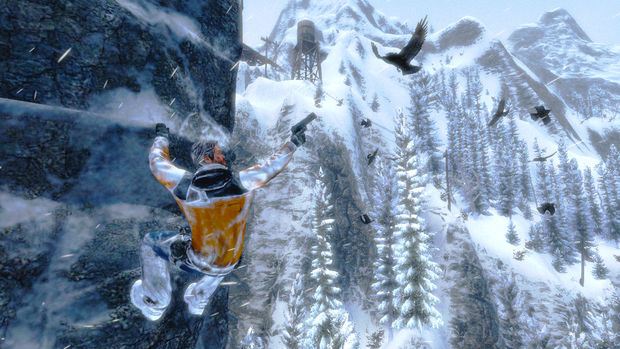 That's how the game would describe itself anyway; whereas I would lean more towards describing it like: shoot animals, climb mountainous terrain, shoot more animals, climb more mountainous terrain, watch cutscene, and repeat for three hours. The story mode isn’t particularly involving, and it’s definitely not difficult, but it’s not exactly boring either. Granted, none of the mechanics are all that special – basic third-person shooting with controls designed with the Top Shot Elite in mind, completely linear climbing sections that do little to break up the monotony, and a story that really isn’t necessary (or good) – still, I couldn’t help but continue playing, just to see what else I could see/kill.

For some reason, I just had this urge to play through the game in one sitting. Whether out of boredom or intrigue, I’m not sure, but, unfortunately, I was actually able to do so. It took me around three hours to beat, but I did go back and try to get all the achievements which added another half-hour. There are only eight levels, so the short length isn’t too surprising, but I have to question why there wasn’t some replay incentive included. Even completionists will find little to do, as almost all of the game’s collectables are left out in the open.

Now, thankfully the story isn’t all there is, or my review most likely would have ended here. Three different shooting gallery modes are available, each with the same eight maps, and are sure to add at least some length and replay value. That is, as long you have the gun peripheral and happen to enjoy slaughtering countless animals for some reason which is never mentioned.

All of the shooting galleries are playable with either the included peripheral or normal Xbox 360 controller, but I would definitely recommend playing with anything other than the normal controller. The cursor’s movement is extremely loose and it can be difficult to hit some of the smaller animals. It’s playable, though not exactly enjoyable, but I have to admit that it did add some time to my play-through. 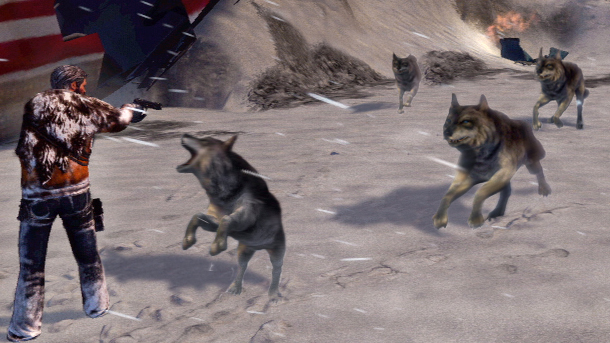 As you’ve probably already seen, the environments in Shadows of Katmai look absolutely beautiful. Definitely not Skyrim beautiful, but the snowcapped mountains in the distance are breathtaking and character models aren’t half bad either. Unfortunately, animations are stiff, glitchy, and plain unnatural at times. Unless, of course, you consider massacring wolves with your back turned to them natural.

All right, I’ve alluded to this enough. Earlier, you may have noticed that I put “fending off” in quotes; that’s because I’m not really sure if you can justify how many animals are killed. Wolves, moose, bears, cougars, birds, and bats are shot by the dozens, and both birds and bats die in small explosions of blood. Thoughts of, “WHY DOES NATURE HATE ME?” were quite common while I was trying to defend myself from one of the hundreds of flocks of birds or one of the many dozens of wolves. I was also displeased to find that a few instances of animal gore and minor curses are used.

Contrary to what you must believe by now, I’m not an animal activist; I just didn’t enjoy this title all that much. I found it mindless, repetitive, and gimmicky. It’s a mix of a tech demo, Uncharted, and a healthy dose of “survival” television shows, and while that’s not a bad mix, it just never comes together here.

If, for some bizarre reason, you want a gun peripheral for your console, this isn’t the worst way to get one. The story, while short, is semi-enjoyable and the shooting galleries are frantic. It’s cheesy, glitchy, and not at all unique, but bundled with a peripheral (of unknown quality), it’s not quite as horrible as I thought it might be. As long as you’re fine with a main character that seems to be bent on committing animal genocide, fans desperately in search of an on-rails shooter may possibly want to check this one out.