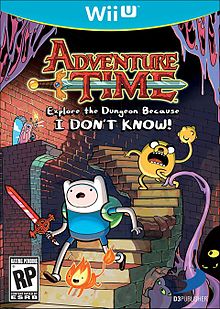 Thank you D3 for sending us this game to review!

Up to four players can join in and explore the 2D retro looking prison dungeons.  As you progress in the game, you can unlock more characters.  There are several stats and abilities that are unique to each character.  The stats include life hearts, called thumps in this game, strength also known as rowdiness, focus and imagination.

While Marceline is not very rowdy and cannot block attacks, she floats and is immune to falling into the many pits on the floor.    Cinnamon Bun is the opposite and is very tough and has the ability to summon food to restore health.  Each character can also carry varying amounts of tokens that can boost health, defense, and increase the charging speed of attacks. 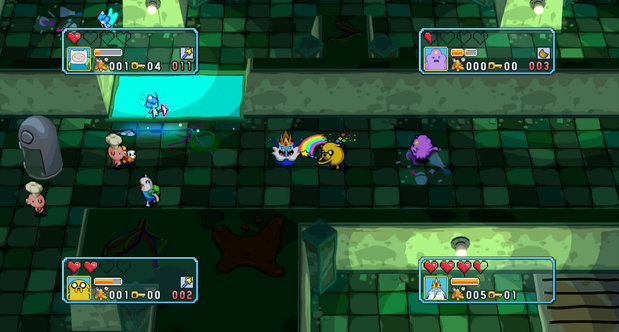 The attacks are rather humorous and creative.  My favorite weapon hands down is the kitten launcher which does as it says.  It only carries fifty kittens at a time, but you may reload it by finding ammo or a new kitten launcher to replace it with.  Other weapons include over easy eggs, bamboo sticks, swords, and nine scoop ice cream cones.

The enemies vary from skeletons, birds, fire spitting flowers, huge tentacles, and of course, bosses.  Most of the enemies have a predictable attack pattern that can be avoided once learned.  Depending on the character you're playing as, the amount of hits it takes to bring them down varies.

Saving in this game is done automatically and only when you're above ground.  The ability to head outside appears every few levels or after a boss battle in which you will be brought up automatically.  Once you're in the town you can spend your collected treasures on various stat upgrades for your character.  After defeating the first boss, a store opens up that lets you purchase weapons, tokens and food.     Any treasure that is not spent before heading back into the dungeon goes towards paying taxes and will no longer be available to you.

When you go back into the dungeon you can start at the beginning or any checkpoint.  You cannot start at any level you wish.  The levels are not random and quite frankly, very dull.   Your goal is to collect treasure and locate the stairs to the next area.  Other than the bosses, defeating the enemies is optional, but they sometimes drop good loot. 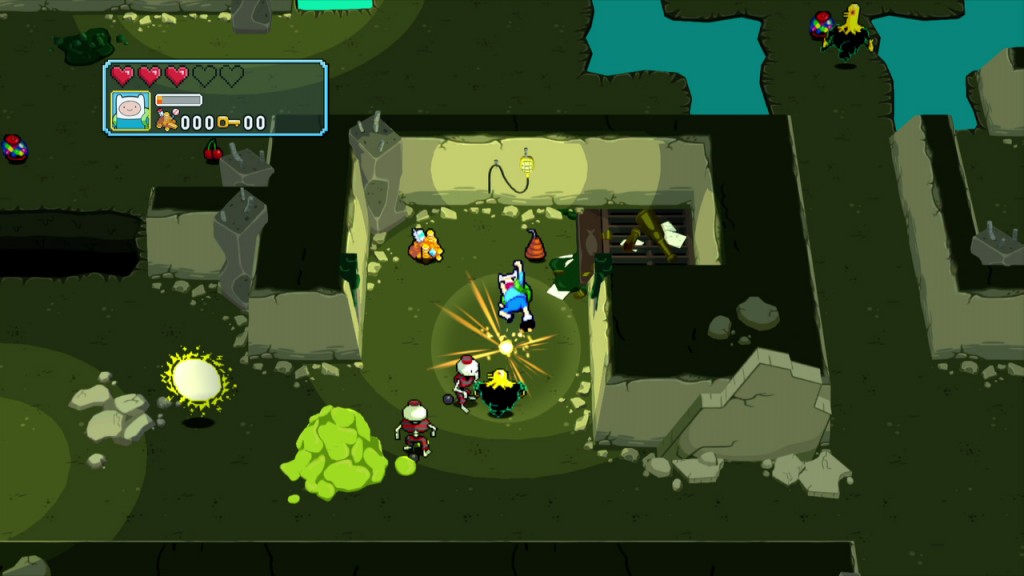 A map feature would have been helpful to keep track of where I have been.  Instead all I can to do tell the difference is kill every enemy and know that I have yet to explore areas that still have them.  Multiplayer is a little more fun than single-player provided that everyone stays and works together.

The look and feel of this game is very old school.  The graphics took me back to SNES times and the music is catchy and sounds like it's from the same era.  I like how the Wii U gamepad show's Finn and Jake's living console, BMO's face. Besides being tickled, it can give you tips on the items you pick up. Unfortunately, I had a hard time hearing and understand what it was saying though.  There are mini-games that can be unlocked and played on BMO.

Other than cartoon violence, this game is family friendly.  My kids and I played it for a little while, but we all got tired of it fast.   I feel bad for those who don't have anyone to share this burden of a game with.   True Adventure Time fans will be disappointed and I do not recommend paying full price for this title.  While there is some humor and kitten launchers, this game still fails to draw my attention Because I DON'T KNOW!