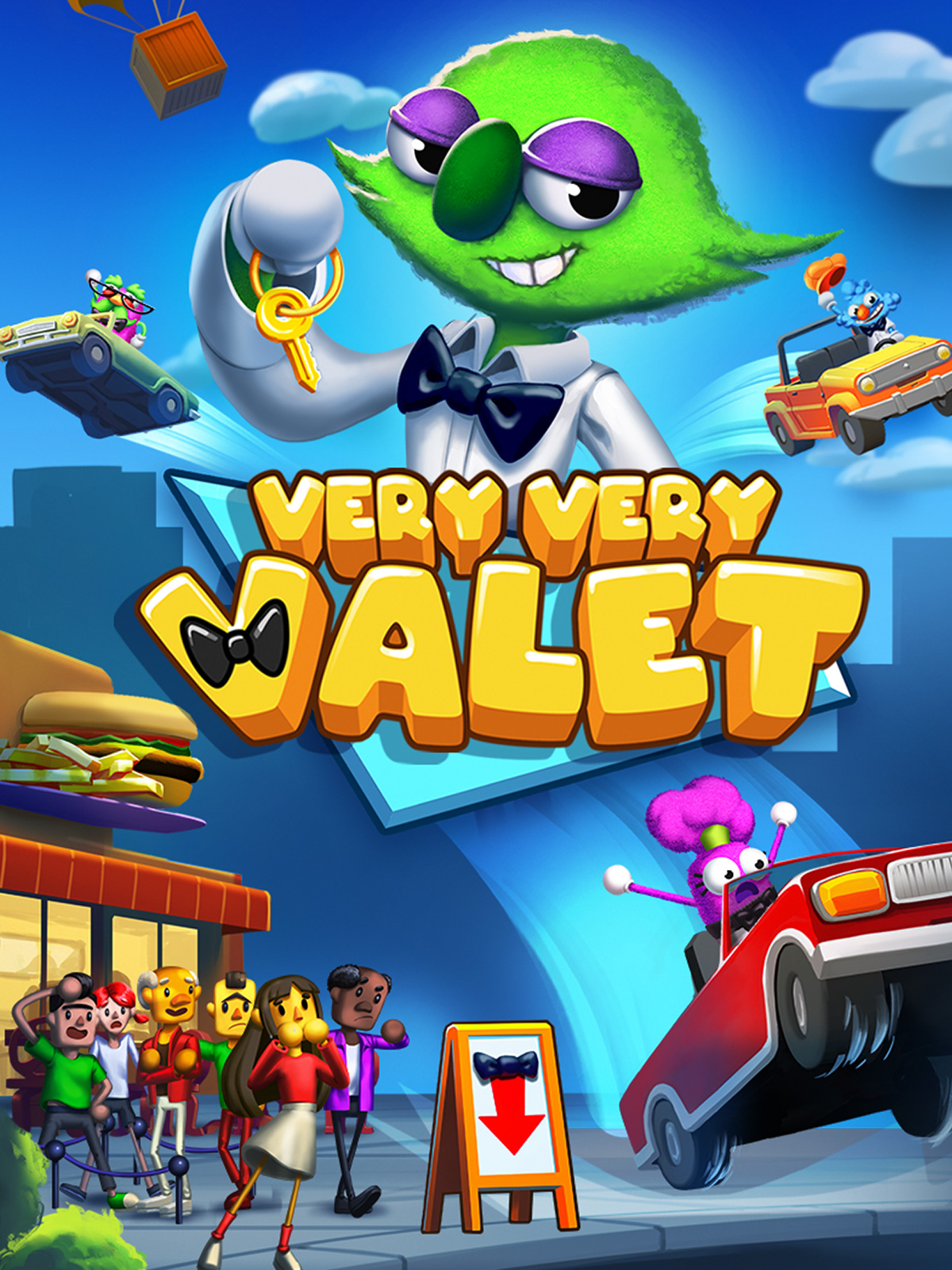 Thank you Toyful for sending us a review code!

Very Very Valet is a couch co-op game where up to four players can park and retrieve cars for restaurant diners.   Parking properly is completely optional, but you’ll want to make sure that you can access the cars easily when it’s time to retrieve them.  I initially streamed this game playing by myself and it got pretty hectic.  Adding more players lightens the workload if there’s good communication.

My kids have finally recovered from me yelling at them while playing Overcooked.  They willingly joined me for several rounds of Very Very Valet and I must say that this game is much more fun with multiple people and I don’t recommend getting it if you plan on playing solo.

Before you become a certified valet, you’ll have to go through the tutorial, which covers the basic controls and special moves like drifting and accelerating for jumping ramps.  Yes, there will be times where you’ll need to launch cars over ramps to deliver them back to their owners.

At first, there will be just one entrance to retrieve the cars from, but later in the game, you’ll have to have multiple entrances covered.  When the customer exits the vehicle, they’ll clue you in on how long they plan on eating at the establishment.  Sometimes, they are just picking up a carry out order, but most of the time they plan on enjoying a sit down meal.

Each level will have a different layout that spices things up throughout the game.  For example, one level has a huge dirt pit that you can park the cars in and you’ll have to accelerate off of dirt ramps to bring them back to the customers. In the beginning of the game, you can leave cars wherever, but later on, there will be no parking zones that won’t allow it.

The moment a customer arrives to drop off or pick up their car, an indicator will appear above their head.  It starts off green, but as it increases, it will turn red as their patience wanes.  If the status bar fills up, the car will be teleported away and the maximum number of stars you can earn from the level will decrease.  Levels and new worlds are unlocked as you accumulate stars so you’ll want to replay any levels you did poorly on to earn the maximum amount of stars possible. 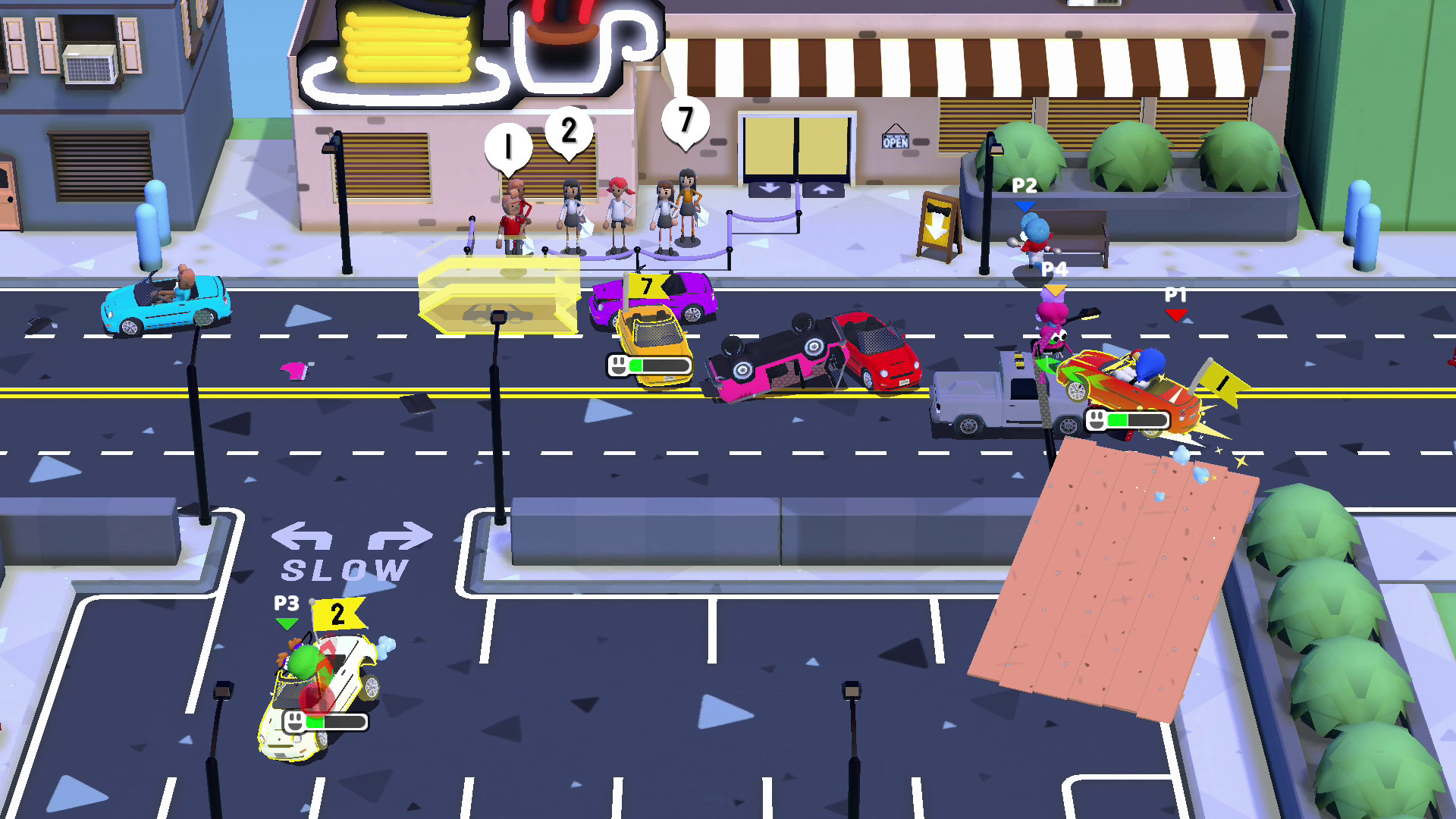 Some levels don’t deal with parking cars at all.  There are some levels where you have to clear waves of bowling pins or trash bags.  Those levels typically have seven waves with a chance to earn a star on every other wave.

After completing a level, your character will be given a title based on their performance.  Players will also get to view and vote on which video highlight clip is their favorite.  We had some laughs at these clips showing our character flying into the air or a bad car pileup getting featured.

Very Very Valet is pretty family-friendly.  The only moral issue worth noting is the cartoon vehicular violence.  While players can be hit by cars, they won’t die.  It just slows them down from assisting an impatient customer.  Violence is not rewarded in this game.

If you’ve ever wanted to be a valet or if you enjoy couch co-op games, Very Very Valet is worth looking into.  However, I only recommend getting this game if you have some people nearby to play with.  The asking price of $14.99 is reasonable, but I have seen it on sale for half price and at $7.49 it’s a steal!