PAW Patrol is honestly one of the best shows geared towards younger children. It’s very clean, encourages good morals, and is well-written with a great voice cast (which rotates since most of the characters are voiced by aging children). Of course, with every successful kids' show comes the inevitable tie-in game, and PAW Patrol is no stranger to them with three previous platforming titles available for major consoles. However, PAW Patrol: Grand Prix stands out as an instant recommendation for young kids, and a decently good racing title for parents and older gamers.

The setup for PAW Patrol: Grand Prix is simple, as Mayor Goodway has opened a racing grand prix in Adventure Bay, with each character vying for the Pup Cup. However, the dastardly Mayor Humdinger is trying to ruin the festivities for the contestants by popping up all over the raceways and distracting the racers. It’s up to you to race to the finish line!

You can choose from 10 characters: human protagonist Ryder, the main six pups (Chase, Marshall, Rubble, Skye, Rocky, and Zuma), and three unlockable members from later in the series (Everest, Tracker, and Rex). While there were some omissions (notably some of the human characters like Mayor Goodway or Farmer Yumi plus some of the other extra pups like Robo-Pup or Humdinger’s kittens), this roster is tight and represents the later seasons of the show too. The fact that they chose to acknowledge Rex, a latecomer pup that’s physically handicapped, was a nice touch.

Racing is simple, as you have six characters at a time looping around a track for three laps, with optional Humdinger obstacles that you’ll have to navigate around. Much like other kart racers, PAW Patrol: Grand Prix has consumable skills you can pick up and use against foes. (Yes, there’s a blue shell-esque item which can really mess up your day.) 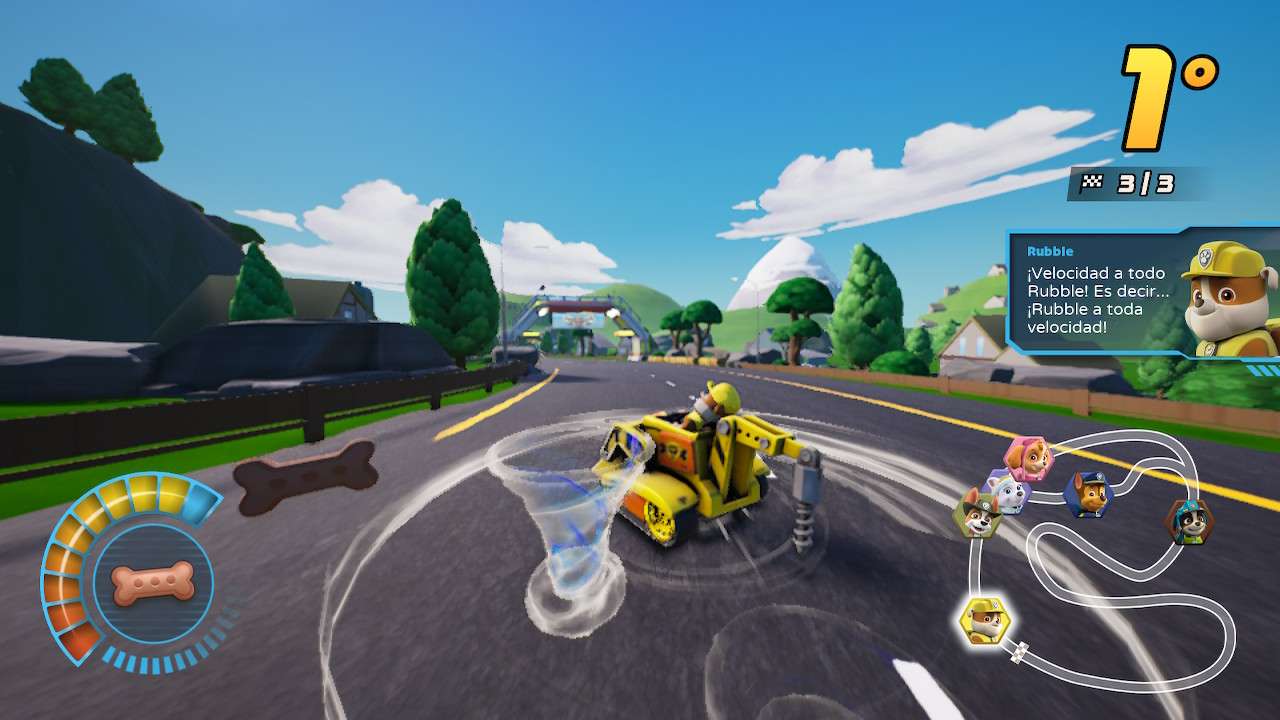 In addition to these skills, by collecting enough pup treats scattered on the tracks, you can gain character-specific abilities that can really turn the tide during a race. My main racer Rubble can plop a huge boulder behind him to slow down foes, while someone like Skye can propel her vehicle and speed up very quickly. While some characters are more unbalanced in their abilities, there are multiple opportunities to use these. Also, other items make for some hectic gameplay when everyone is bunched together.

The biggest thing that separates the game from more serious kart racing competition like Mario Kart 8 Deluxe or Crash Team Racing Nitro-Fueled is that it’s designed with very young kids in mind. On the easy difficulty, autodrive is enabled which means you only have to focus on accelerating and using items.

This autodrive mechanic works well and can be toggled on any of the three difficulties, but you won’t be able to dominate on hard unless you can master the drift move (which surprisingly isn’t explained in the tutorial). I really liked this addition, as it means I can pass a controller to my godchild and she can have fun pressing a couple buttons and timing her items. Also, related to difficulty, it’s definitely not up there in terms of hard AI; as long as you can beat 100cc Mario Kart cups, you’ll be right at home in the winner’s podium consistently. Driving feels great and encourages drifting when playing on hard mode.

The driving itself is enjoyable, but the tracks can feel a bit uninspired at times. The designs are mostly catered towards round loops with few twists and turns, but there are some forks in the road that will allow you to take shortcuts should you find them. Again, nothing too revolutionary, but it works perfectly for younger gamers. There are 15 tracks to choose from, and you can toggle whether you want to race during the day or night. 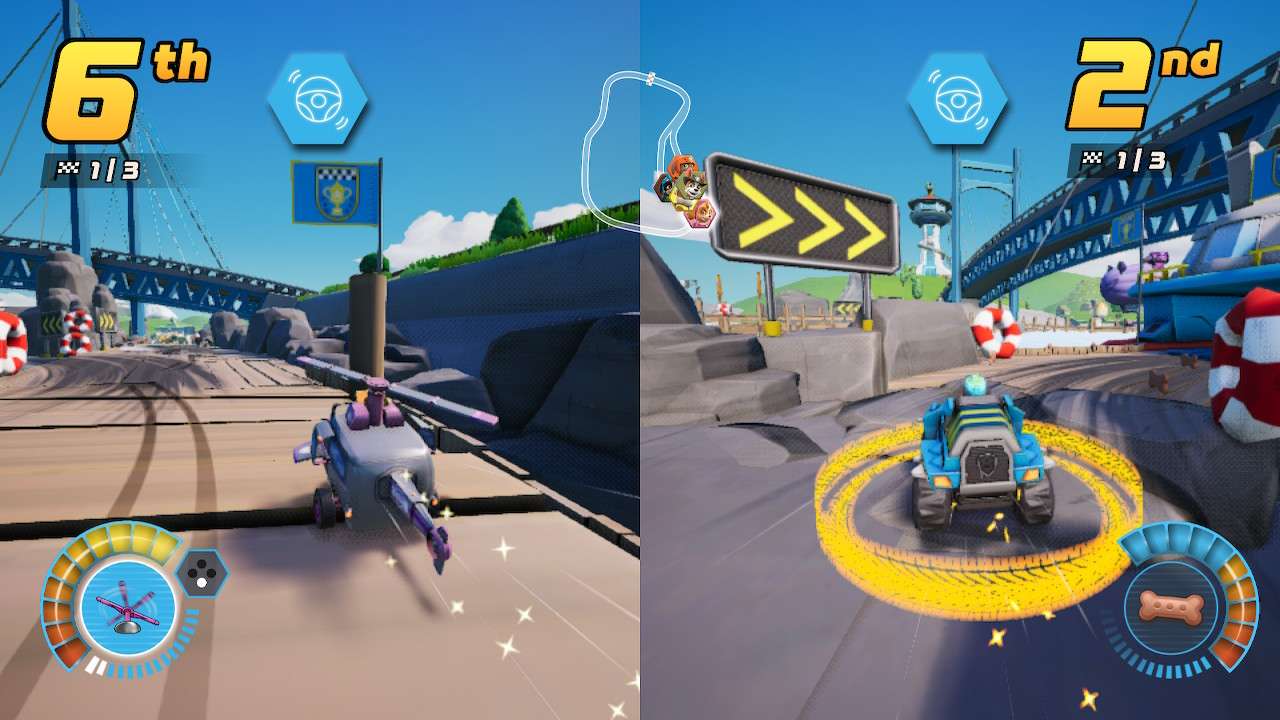 As the game takes a streamlined approach to getting into a race (offering a quick race option that randomizes characters and tracks), that means there isn’t much to do outside racing. I missed the minigames from previous PAW Patrol titles, and they could have easily been implemented here. Additionally, there are cosmetic unlocks you can deck your pup out with, but there aren’t any differences when it comes to customizing your kart’s stats. Again, this is centered towards younger audiences, but it would have been nice to include a pro mode or some sort of customization feature.

What I enjoyed immensely about PAW Patrol: Grand Prix was how much effort was taken into the presentation and voice work. The game is fully localized in 15 languages (and has translated text for two more), which means each supported language has their own localized voice cast. Sure, you have the usual English/Spanish/French voice cast, but as someone studying Japanese, it was refreshing to hear the Japanese voice cast lend their talents too; there’s even Swedish and Arabic language options available! While the voices are limited to in-race clips and cutscenes before each race, this is the most voice work done in a PAW Patrol console title.

The graphics work well on the Switch too. While they most likely won’t be as buttery smooth as Xbox Series X or PlayStation 5, the Switch version didn’t drop on me during my playthrough, and I was able to play splitscreen with two characters without much slowdown on tabletop mode as well as handheld. Kart racers thrive on local multiplayer, and this game does not disappoint.

Even in terms of objectionable content, this game remains squeaky clean. The game does feature some mild cartoon violence as characters can be hit by a number of objects like pies, tornados, and water balloons. However, they’re in no danger and only spin out for a second or two before moving again.

All in all, PAW Patrol: Grand Prix is a must buy for any fan of the PAW Patrol series. While it’s catered mostly to children, it’s still a great time for parents or older siblings who would want to try something with the young ones this Christmas!