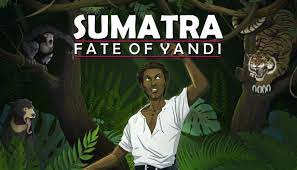 Thank you Ratalaika Games for providing us with a review code!

It’s pretty rare of a video game to adapt the setting of an Indonesian jungle. Sumatra: Fate of Yandi happens to be one of those games. A point-and-click adventure created by Cloak and Daggar Games, it’s generally uncommon that we see one these days—especially one inspired by classics such as Monkey Island. However, this adventure is far less humorous than the former mentioned.

Sumatra: Fall of Yandi stars the titular Yandi, a married Indonesian man who, like many, greatly dislikes his logging job. A terrible boss by the name of Bandan who refuses to pay Yandi his overtime combined with a hard labor career, means he tends to emotionally neglect his loving wife, Adiratna. Working with his best friend Ramdan is the only reason he continues to put up with the work. When rainfall causes a landslide to happen, forcing Yandi and Ramdan apart, drifting unconsciously down the river, Yandi finds himself lost within the Sumatra jungles, desperate to get out.

The Sumatra jungles are displayed in 8 and 16-bit graphics. The color pallet mostly consists of browns and greens—fitting for the jungle. In most cases, Yandi and the many characters and animals are shown in minimalist detail. Humans don’t even have facial features and flies are displayed as one pixel. In the rare times where the graphics aren’t minimalistic, it uses close-ups that show greater fidelity and detail. These close-ups are used sparingly so it makes each moment impactful and surprising. The gloomy aesthetics work well in having a player feel like they are traversing a jungle. The left and right borders of the screen have grassy foliage, giving the game a somewhat theatrical look. 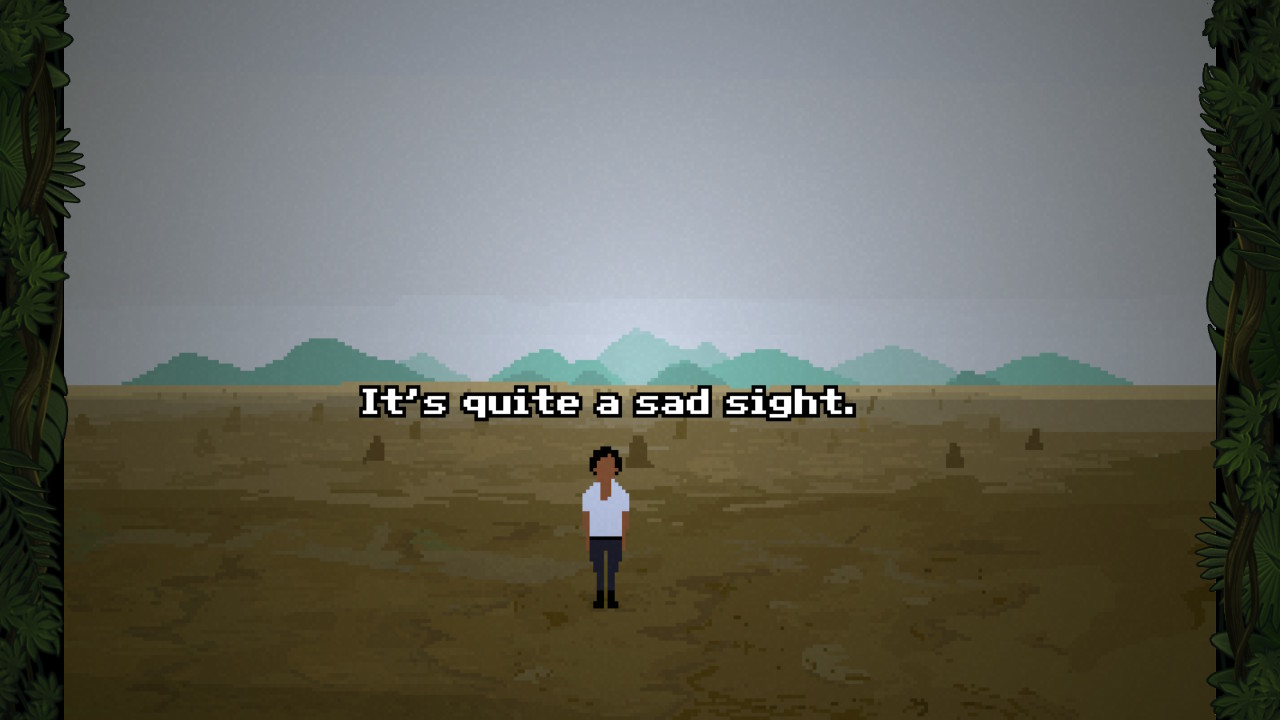 Strong Points: Great usage of close-ups; a relatable main character
Weak Points: No autosave feature
Moral Warnings: Language such as “a*s”, “h*ll”, “b*st*rd”, an F-bomb, and “kampret”; “oh my god” is used in vain;  a quote “have you lost your testicles like Ramdan?”; Mergo the tiger god; blood on dead birds; a character gets shot; one moment of Yandi and Ramdan drinking whiskey and possibly getting heavily intoxicated

Most of the time, Sumatra: Fate of Yandi uses small sound effects such as the calling of birds, chirping of insects, or the shouts of monkeys to fill in for ambiance. Their sounds echo through the jungle and in contrast to the retro visuals, the sound effects are quite modern. The few musical tracks played throughout can range from bright to somber.

Like any point-and-click adventure, Yandi navigates around by “clicking” the area. For consoles, navigation is done by a cursor controlled by the left control stick. The A button is to interact with the item or to move to the designated area, while the B button is to hear Yandi’s commentary on the item or scenery selected. Navigating to the top border of the visible screen lets Yandi access his inventory where he can combine items or use them on other items or objects. This can get slightly awkward when trying to move up the screen as one can accidentally access the inventory instead. Because I reviewed the Switch version, everything can be controlled by the touch screen (as long as you’re in handheld mode of course).

The puzzles are about middle-of-the-road in terms of difficulty and stay mostly in the realm of reason. Thankfully, there are no pixel hunting moments nor are there obtuse solutions to puzzles that defy reason. I tend to not be so good at point-and-clicks and yet I was able to figure out 90% of them without any outside assistance. Strangely enough, there is no autosave feature. The absence of it makes Sumatra feel a bit archaic. However, saving is easy, and multiple files can exist. 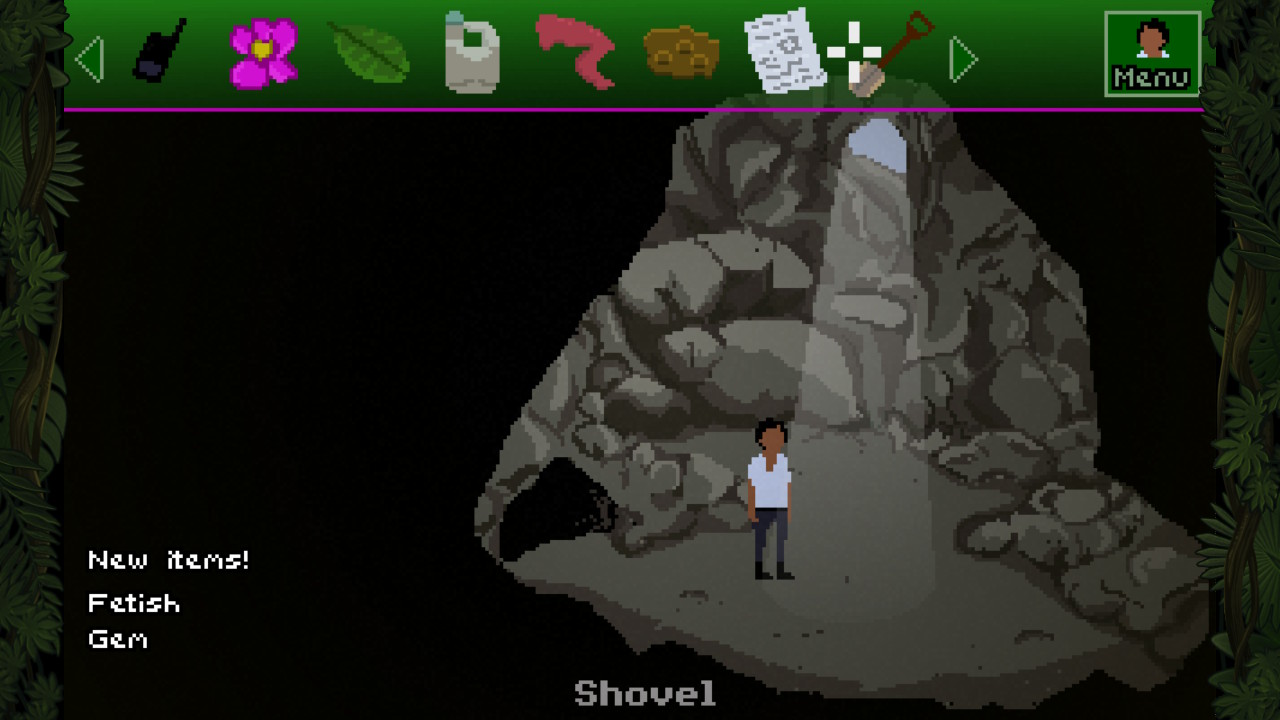 Learning more about Yandi as the game progresses is nice. Although Yandi is a fairly simple character with a good moral compass (he refuses to kill animals unless absolutely necessary and shows remorse when forced to), he ends up being relatable. I’m sure a lot of us have all had a job or task that we didn’t exactly like doing, but put up with it for the greater picture. His relationship with his wife Adiratna is shown through cutscenes and the love they have for each other did bring out the inner romantic in me. The strong brotherly bond he shares between himself and Ramdan also did remind me of some of my relationships with my friends. Yandi’s fight for survival in the jungle lets him appreciate the smaller things in his life and the things he previously took for granted. The trek through the jungle and the secrets it contains all ends in a bittersweet moment for Yandi as he reflects on what he has gained and lost throughout his journey.

Despite the ESRB rating, there are a few things that they failed to notice. The most notable aspect being the amount of language used. The ESRB completely omits the usage of language, despite words such as “a*s”, “h*ll”, “b*st*rd”, and even one usage of the F-bomb. Yandi also says the word "kampret" a lot (54 times to be exact!) In the Indonesian language, it's a term of exclamation that literally means "bat" (as in the creature) but is used in the same way an English speaker would use "d*mn" or "sh*t." There is also one quote from Bandan directed to Yandi, asking if “he has lost his testicles, like Ramdan.” For the things that the ESRB did note, there is blood in two separate instances; one where Yandi is forced to kill a chicken to use as bait, and another where a character gets shot towards the end. One instance of alcohol is when Yandi and Ramdan share whiskey and proceed to fool around a bit while drunk. In terms of other moral warnings, Yandi does come across the Orang Rimba people and they mention that they worship Mergo the tiger god. “Oh my god” is used in vain.

Sumatra: Fate of Yandi is classic in almost every sense of the word. It isn’t a very long adventure, taking less than four hours to complete and all of its features are very simple. But just because something is old or inspired by the old doesn’t mean it can’t be good. This is a solid, enjoyable adventure that many point-and-click fans will appreciate. It comes at a nice price range and a cool setting with an understandable main character. The language can come as quite a surprise considering the ESRB’s complete lack of mention, although give it a chance if that doesn’t bother you and if you like point-and-click games.