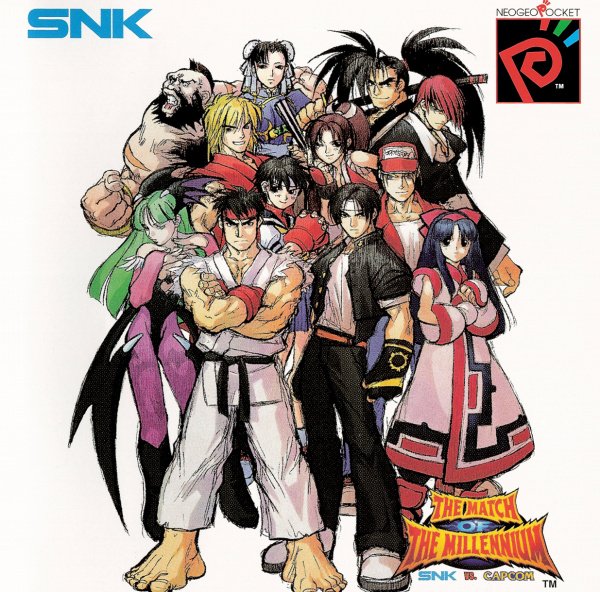 Like many, Street Fighter II was one of my very first fighting games, and one which holds some of my fondest gaming memories. I probably played the most of Street Fighter II Turbo: Hyper Fighting on the SNES, but I've played plenty more over the years. While I didn't play quite as many SNK fighters, I did put plenty of time into Samurai Shodown, which I enjoyed immensely. Interestingly, while SNK and Capcom did release several crossover fighters over the years, what is surprising is that this title, on the Neo Geo Pocket, was the very first combination fighter for these companies - previous to that was a card game, but this is the first in the style both are famous for.

SNK vs. Capcom: The Match of the Millennium was a Neo Geo Pocket Color (NGPC) 2D one-on-one fighting game that was released way back in 1999. Now, if you were like me and didn't realize what a Neo Geo Pocket Color was, you might have thought that it was just a smaller Neo Geo. But that is most certainly not the case! A Neo Geo Pocket Color was SNK's more or less direct competitor to Nintendo's Game Boy Color (GBC). Unlike the Game Boy, the Neo Geo Pocket included more powerful hardware - a 16-bit CPU being the main improvement. But in other ways, it was fairly similar, with a small and low resolution screen, two face buttons, and a rather basic sound chip (while I'm not certain, based on what I'm hearing, the NGPC's sound chip might even be worse than the GBC). Given that SNK's main expertise has been fighting games, seeing how they treat the merger of their own and Capcom's properties has been interesting.

This game is part of SNK's new line of Neo Geo Pocket Color re-releases on Nintendo Switch. I recently reviewed Fatal Fury: First Contact and The Last Blade: Beyond the Destiny, and this is the third title I got to check out. Being a fan of Street Fighter and looking at the content included, this is by far and away my favorite NGPC re-release yet.

Being an emulated title of a Neo Geo Pocket Color game, the graphics and sound are incredibly basic, though there are certainly notable improvements from the other NGPC games I reviewed. It turns out to be the largest title (storage-wise) that was ever released for Neo Geo Pocket, and once you play it, it's easy to see why that's the case. Character portraits between levels look probably as good as the console could handle, and the story sequences sometimes have interesting animations that occur. There are a ton of different game modes as well.

Strong Points: Good emulation of a classic game; the way they did two-player mode is really neat; fighting mechanics are solid; excellent character roster, and SNK did a great job of covering the Capcom fighters; best looking Neo Geo Pocket Color fighting game I've reviewed
Weak Points: It emulates the Neo Geo Pocket Color, which had graphics, sound, and controls about on par with the Game Boy Color
Moral Warnings: Fantasy violence, as you beat up your opponents with various weapons, kicks, and magical attacks; some of the female characters wear outfits that leave little to the imagination; minor curse words like 'h*ll'

Having played through the various different characters and game modes, I must say that SNK really gave extra special care to treat the Street Fighter characters well - they play pretty much exactly like you would expect, with the Street Fighter Alpha series move sets mostly accounted for. The Capcom side of the character roster is certainly Street Fighter heavy, with all Shoto (Ryu-like) characters represented as well, along with two hidden characters. There are also Darkstalkers characters. The SNK side is also well represented, and the characters play great. Quite a few games are accounted for. These include Fatal Fury, Art of Fighting, The King of Fighters, Samurai Shodown. Athena from classic 1980s SNK is also a nice touch. There are also two hidden SNK characters.

I've spent a fair amount of time with the main Street Fighter characters, as well as Haohmaru, since he's one of my favorite SNK characters. I played the rest through the 'Random' character selection, which is actually something that surprised me with how well done it is. I've never played a fighting game where 'random' meant that you play as a different character for each battle. I love that, especially for the many tag team modes this game includes; more to come on that later. What I want to note here is that the distinctiveness of the characters, and the games they are from, are represented well. For example, in Street Fighter, each normal attack does relatively small amounts of damage, with special moves taking off more of the opponent's health bar, or doing more hits. Samurai Shodown is quite a bit different - if you make a mistake it leaves you open to attack, but each time you hit, you hit like a truck. And really, special moves don't even necessarily do the most damage; that strong slash is a powerhouse in its own right. That difference in experience was really clear playing Haohmaru after playing several rounds of Ken or Ryu. The other characters also show what makes them special, but I felt like those two perhaps show the differences the most clearly.

I am also impressed with the crazy amount of game modes available, that spans single and multiplayer. There is the standard 'Tourney' mode, which is most similar to Arcade in other fighting games, where you choose a character, and play through a bunch of opponents until you beat the final boss, which ends up being souped-up versions of Iori if you are playing a Capcom character, and a powered-up Ryu if you play as SNK. In this Tourney mode, you can choose to play as a single character, where you have to win the best out of three rounds, a 'Tag' mode where you get to play as two characters and can switch them out with a button press and win once both enemies are defeated (in one round), or in 'Team' mode where you have three characters that you choose to use in a specific order, and you win or lose when all of them are defeated, with each round ending when a character dies. Each mode feels notably different, and it was here that I found out how random works - and how cool it was to have a single stable character, with the rest being totally random.

Versus mode allows you to play against another single person in the room with you (local), and it also includes the really neat side-by-side mode that the other Neo Geo Pocket Selection Switch ports have; namely each side of the Switch controls one character, while you share the screen. This way, you can even enjoy multiplayer on a Switch Lite! It's really neat. 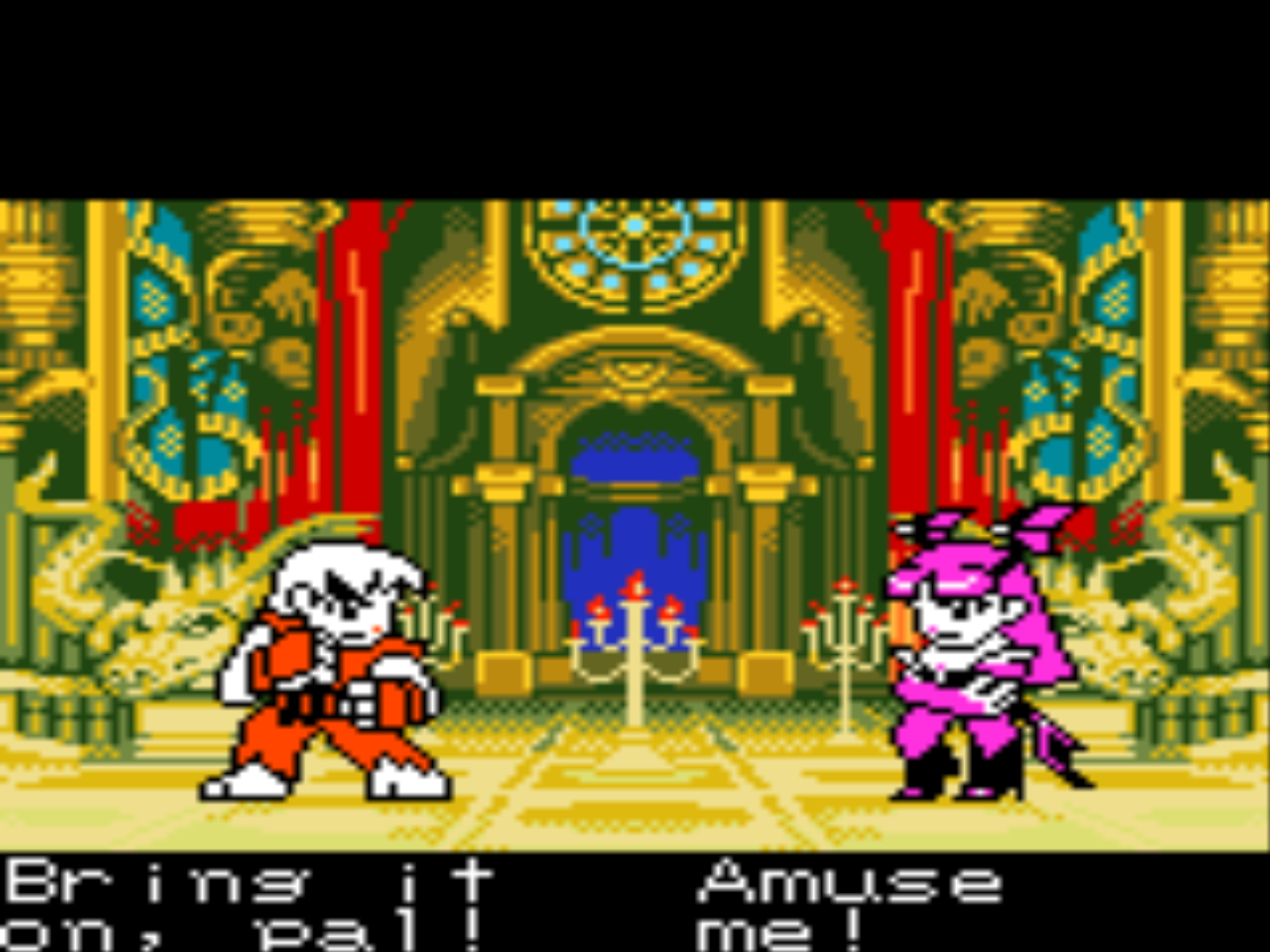 Other modes include more typical ones like 'Sparring', which is basically a training mode, and a records mode, showing you all of your wins and losses. 'Entry' allows you to predefine your favorite character with a custom win quote, along with predefined Tag and Team groups. The final mode is actually a set of minigames called 'Olympics'. Here, you choose a team, SNK or Capcom, and enjoy the cameos with your team manager (Rimururu or Karin respectively) as well as partake in the various challenges. There's real gameplay variety here - you have endurance modes like 'Survival', skill modes like 'Time Attack' and 'First Blast', and four other modes that are unique to each team. On the SNK side, you have 'Target 9' and 'Blade Arts', which are both modes where you need to press a button (or in 'Target 9's case, control pad) in one of several positions in a whack a mole style of way. 'Blade Arts' is Samurai Shodown themed, while 'Target 9' uses guns and targets; perhaps references Metal Slug? On the Capcom side, these games are far more memorable, at least to me. 'Ghost Trick' is a Ghouls 'n Ghosts themed minigame where you jump over pits and avoid enemies to grab bags of money. The music is awesome. The other one is 'Cat Walk', which is somewhat like a gamepad version of Dance Dance Revolution; you can dance as one of the (mostly) girls, while Felicia grabs the correct button press at the right time. I find this one quite difficult; none are easy, but this one is a real challenge.

Graphically, as mentioned before, it's a Neo Geo Pocket Color game, so the graphics are going to be lacking, as it has a low resolution screen with a limited number of colors. Character sprites are in a 'chibi' style, but otherwise look good. It's certainly the best looking Neo Geo Pocket Color game I've seen yet. On the audio side, there is plenty of catchy chiptune music, but the sound effects are generally lacking, which is consistent with what I've seen on all NGPC games I've reviewed.

From an appropriateness standpoint it's pretty clean; animated one-on-one violence, with no blood that I noticed (though oddly, the ESRB for this remake lists mild blood, but the original NGPC game, which is also listed on the ESRB, does not note blood). Some female characters wear next to no clothing, or wear short skirts you can see under (they are wearing shorts underneath). I noted one use of the word 'h*ll'. Also, some characters use magic-like powers, where they can throw fireballs and the like.

Mechanically, this is a really solid fighter, with the A and B buttons performing various attacks, like punch and kick. If you press for a moment longer, it performs a strong attack, which varies per character you play with. There is a built-in manual that includes character attacks, as it displays the entire original printed game manual on screen. All character moves are also listed in the manual, making it a great online reference. You can access it at any time by pressing the minus button.

My evaluations of previous Neo Geo Pocket Color titles have been based on their relationship to other games in the series; why buy a watered-down version, where a better version exists, right? But with this game, I feel confident in saying that there's enough here that is unique to say that SNK vs. Capcom: The Match of the Millennium is a game worth playing, despite the technical shortcomings of the source platform. The animations and action are reasonably smooth, the character variety is great, and the many game modes can keep you busy for a long time. And, it's one of the few times SNK made a game where you get to play as Capcom's best fighters. I really enjoyed this one, and if you are a fan of 2D one-on-one fighting games, I think you will too!