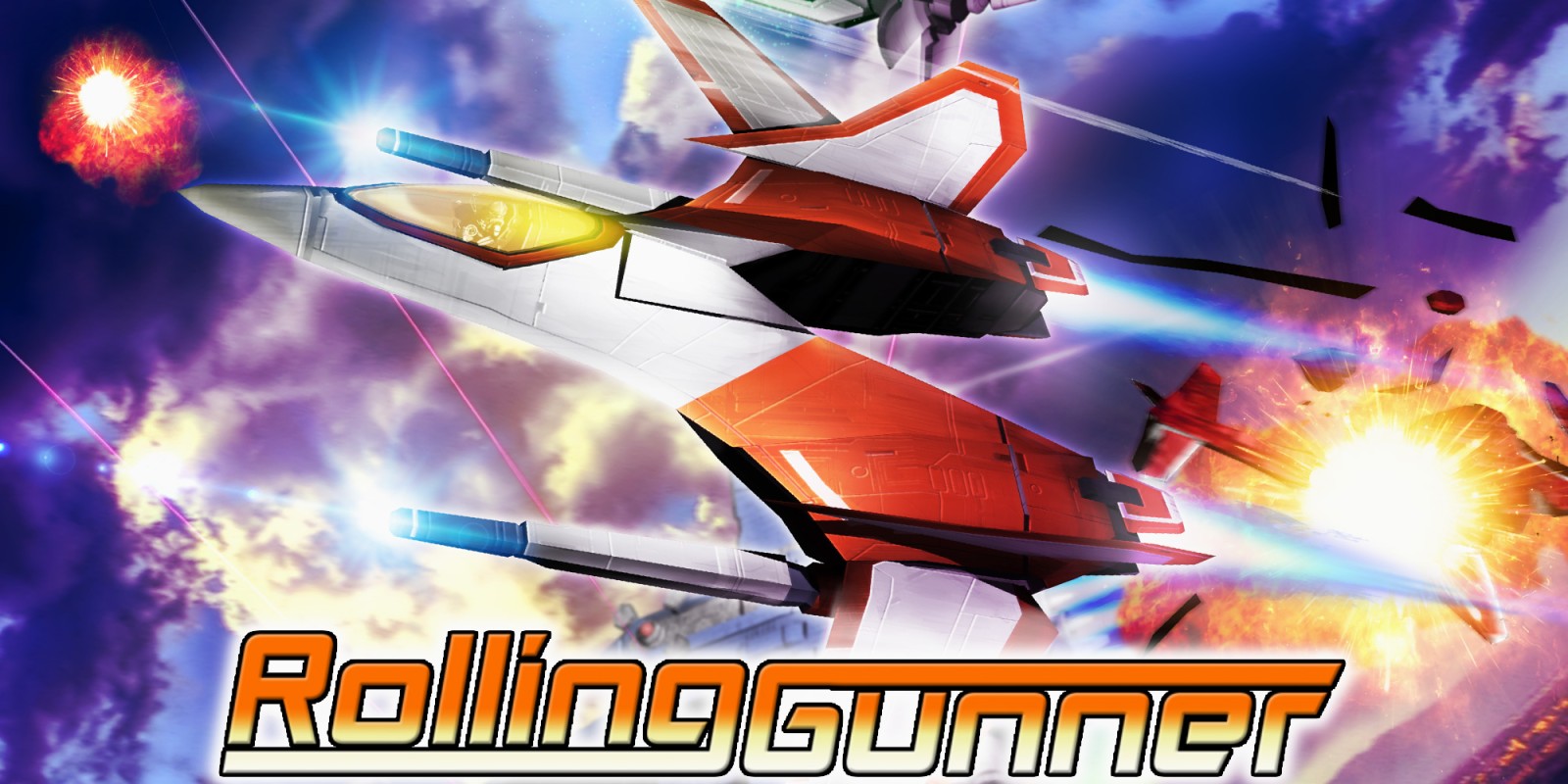 We want to thank Mastiff Games for sending us a copy of Rolling Gunner. Thank you so much!

If there is one thing that I know better than most people, it is the arcade scene. Having grown up in both the ’80s and the ’90s, I can tell you that all of the great games in history came right out of the arcade. From Pac-Man to Black Tiger, the legends of the arcade have both eluded and challenged me for decades. This includes a genre of games that has recently resurfaced in popularity over the years. These are the great and incredibly fun shoot ‘em ups, or shmups, as we call them today.

Out of all the genres represented in video games, shmups are probably my favorite. With your hand on the joystick, you must make pixel-perfect maneuvers to dodge the incoming bullets from the enemy fighters. From Galaga to Gradius, shmups have challenged players for years, and the associated “bulletheck” sub-genre (censored for those with discerning eyes) has added an artistic flair to the white-knuckle action. The indie Switch title, Rolling Gunner, fits well into this genre as it gives the players plenty to dodge, and a rather quick play through to capitalize on their lunch break.

Most shmups have some sort of story attached to the action, even though it is hardly center stage in the content of the game. The story of Rolling Gunner is about a rare mineral called blasterium, which once helped progress mankind into the future. It has become sentient and is creating machines to eradicate humanity. The Rolling Gunner, humanity's greatest weapon against the AI menace, has been launched to single-handedly eradicate all of the enemy robots and the core blasterium piece. What follows are six stages of bullet dodging and bot blasting, and the action doesn’t stop until the core has been destroyed. 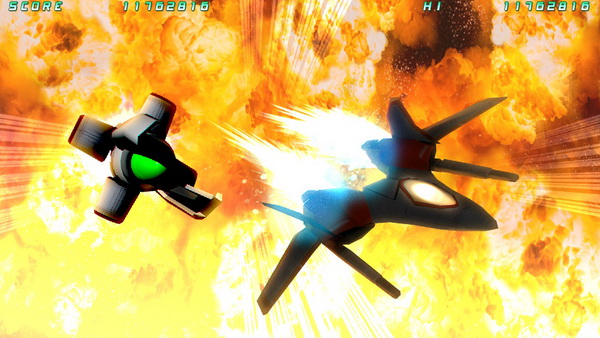 This type of vague narrative is mentioned at the beginning of the game, but like most shmups, the story is explained through the environments. You can follow the Gunner through a sprawling city landscape back to your home ship, which you must now destroy. Obviously the blasterium has taken it over, even though that is not verbally stated in the game. The blasterium gets away and is holed up on a moon base and must be destroyed before fleeing again. I caught all of that through visual storytelling from the action of the game. Not too many titles do that anymore, and it is refreshing to see one bring back this classic form of storytelling within games.

At face value, Rolling Gunner doesn’t really look like anything special. Yes, it is a 2.5D side-scrolling title that puts 3D sprites on a 2D plane, but that is being done constantly within the genre. No, this game is special, not for what it adds to the action, but for what it takes away. Normally in this genre, the player would get floating power-ups that can be used to increase the power of their ship. Those power-ups are eliminated in this game and replaced with a “duel gun” system that can be toggled to blast away from the movement of the ship or stay in a fixed place. The Rolling Gunner is actually two separate ships: the main ship that can only blast forward, and the peripheral, which can shoot in multiple directions. Mitigating the fire of the peripheral is key to mastering this game.

You can choose from three separate ships at the beginning of the game. Each one has a different “spread” to their attack, but they are all generally the same. When playing, the Gunner will gradually build a charge which can be initiated by a trigger button. When triggered, the blast will increase in size and power, and another charge will build under that. Three separate levels of blasts can be used, and the more those are used, the more points the player receives.

Anyone can beat this game. It takes a lot for me to say this, but with unlimited continues that bring the players to the exact place they died on any difficulty level, I can truly say that anyone can beat Rolling Gunner. That’s not the question, however. The question is this: how many points will you earn? The online scoreboard reads like a classic arcade scrolling list which features the best Rolling Gunner players in the world. The points accumulated during gameplay allow the players to have the opportunity to live in infamy among the rest of the contenders. These points are gained by playing through different difficulties without losing all lives. The combination of using power blasts and collecting the point tokens culminate to give the player a massive amount of points. Whenever a player loses all of their lives and is forced to use a continue, they lose all of their points and must start from scratch. It really is about achieving the oldest goal in gaming history: the most points! 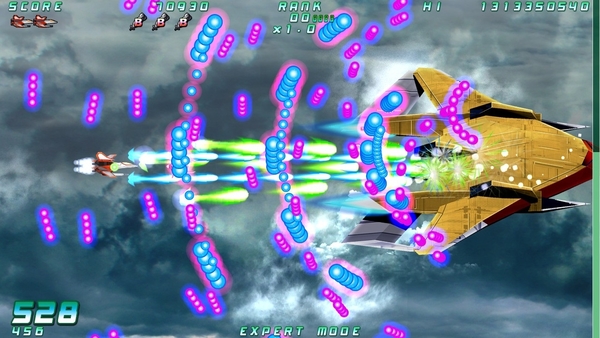 As much as I truly enjoy these types of games, I can’t help but criticize some key components of this game, and by proxy, the genre itself. Like most shmups, this game is very short, as it should be, but the action is pretty much the same from level to level. Despite slight difficulty spikes throughout the game, nothing really changes in the title’s mechanics. “Bulletheck” games add extra variables to this same formula, and the result can be overwhelming. The sub-genre is identified by two characteristics: an artistic and uniform spread of the bullets, and a tiny hitbox on the player. Rolling Gunner uses both, but the result is rather difficult on the eyes.

The Gunner itself is not what needs to be navigated around the bullets, but rather it is a small green dot in the center of the craft. This is the exact same mechanic used in the infamous Touhou games; the very titles that began the “bulletheck” genre. Focusing on this dot is a monumental task, and I often found my eyes straining at the pixels. I honestly could not play this game for more than an hour at a time. Good thing it is so short.

Rolling Gunner offers very little questionable material that will sway the decision of the buyer. The only violence that occurs is implied by the destruction of robots, and we can’t be too upset over broken machines, can we? There is no foul language or sexual content, just a good old fashioned shoot ‘em up against hordes powerful enemies.

Rolling Gunner is a new game inspired by an arcade classic. Though it is a single-player adventure that does not allow for multiple gunners on the screen, the short playthrough will lead to a controller swap to see who can get the top score. This fast “bulletheck” gameplay can be hard on the eyes, so it’s best to take frequent breaks when playing this title. If you have the Nintendo Switch Joystick Controller, that will only add to the excitement. So strap in and move to the edge of your seat, because you are not going to want to blink much when playing Rolling Gunner!