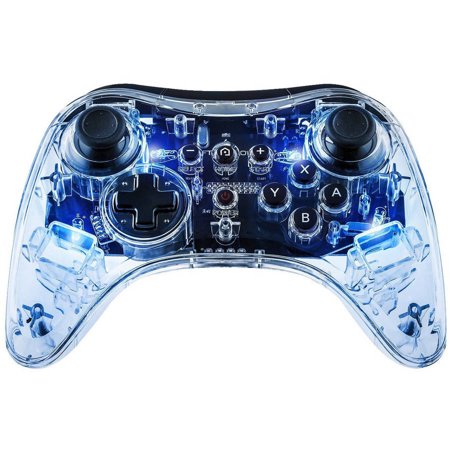 Thank you PDP for sending us this controller to review!

As great as the Nintendo Switch is, I have to say that, having large hands, that the Joy-Cons are simply way too small for me. It's one of the weakest aspects of the system for me, as it's quite uncomfortable for me to hold those tiny controllers. Thankfully, Nintendo has a solution for that: the Pro Controller. As great as the first-party controller is, and it is indeed great, it's also quite pricey. At $69.99, it's the most expensive first-party controller for any console (outside of MS's Elite pad, which does not come with any console). To solve that problem, enter PDP.

At $49.99, this PDP Afterglow Wireless Deluxe Controller is significantly less money than Nintendo's offering, and it's almost as good. The main drawbacks are the lack of Amiibo support (no big deal) and the lack of HD Rumble (kind of a big deal). Lack of rumble is a shame, and seems to be common in third-party controllers in part as a cost-cutting measure. Despite this, not every game supports rumble as it is, and Switch Lite owners won't miss it, since that console doesn't even support rumble on the console itself. Nevertheless, it's a notable omission.

Strong Points: Button layout is pretty similar to the official Nintendo Switch Pro Controller; feels durable in the hand; buttons and sticks feel high quality; rear paddle buttons are programmable to any other button, and are a nice extra feature; controller lights are customizable to most common colors
Weak Points: Charging cable is the older Micro-USB style connector for some reason; no rumble motors; lack of turbo for the programmable paddle buttons (or any other kind of macro) is a missed opportunity; smaller triggers means that you can't easily have one finger on each trigger at the same time; if the Switch goes to sleep while you are messing around with the colored light settings on  your controller, you might need to re-pair it!

In place of HD Rumble, it supports customized lighting, and two back paddle buttons that can be customized to be any button you wish. This can really come in handy if you prefer using triggers rather than buttons, if you find R3/L3 difficult to press, or for really any other reason you can think of. It's a shame that the paddle buttons don't support macros or turbo, but it is what it is.

The feel of the controller is high quality, despite the see-through plastic aesthetic. It has a good weight, and the buttons feel nice. We reviewed the ematic wireless controller a while back, and while that one does have rumble over this model, this one has a much more comfortable and responsive D-Pad. I think it feels great and I have no issues with it. The only downside to the controller, which is really more of a preference than a downside, is that the triggers are a bit shorter than they are on the Pro Controller. This is fine if you use both sets of triggers with one finger, but if you use two fingers, one set for the bumpers and one for the triggers, then you may find the triggers too small.

I first used rear paddle buttons on my Steam Controller, and I love the idea. It's also obvious that these paddle buttons were also inspired by that design, as they both use the same removable door hinge design, and they work in a similar way. I'm glad the paddle buttons are there, though, for me at least, the actuation point on my finger is right between the knuckles on my ring finger, which is a bit sensitive and not it's not very comfortable to press anything there.

The built-in lighting has several modes, including solid colors, a fade in and out effect, constantly rotating between them all, and reactive colors, based on the movement of the analog sticks. You can also adjust the brightness, which has five settings and off, and the color, which has pretty much every common bright LED color. If you like your controllers to glow, I'm sure you'll be very happy with the PDP Afterglow Wireless Deluxe Controller. 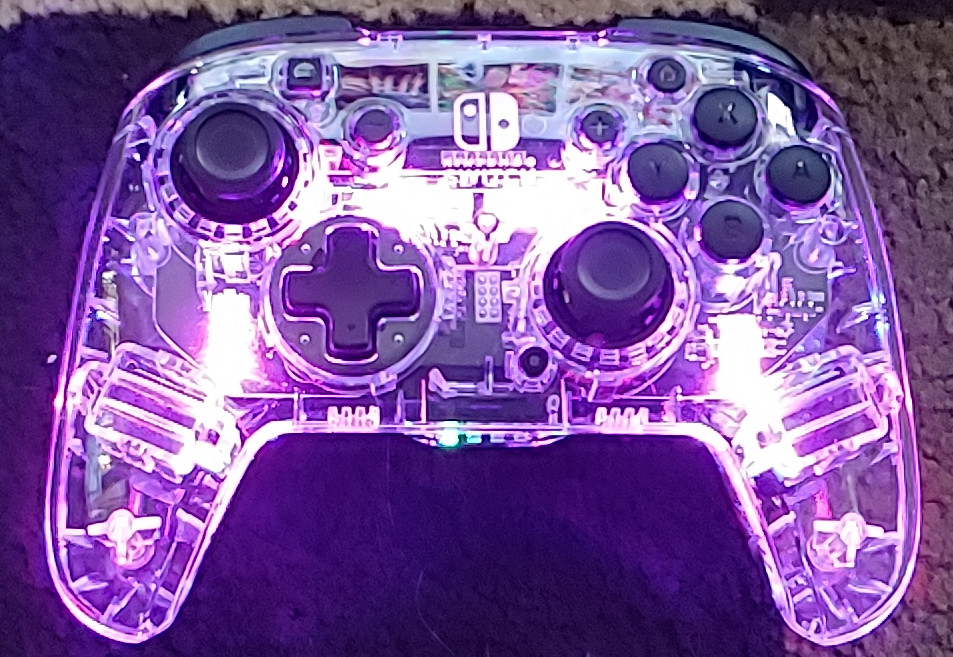 This controller has been flawless in use, as I would expect from a Nintendo-licensed product. (A lot of the cheaper controllers are not licensed, and may have mixed results.) It also has a two-year warranty, which most cheap clones do not have. Despite this, I actually did find a bug; if you hold down the light control button, and the Switch goes to sleep while holding it down, the controller may get all confused and require re-pairing. (To be clear, I don't mean repair as in fix, but re-pair as in connect to the Switch again.) It isn't a big deal, but it sure did surprise me for a moment! I am also disappointed that it still uses a Micro-USB charging cable, when everything else that connects to the Nintendo Switch, and even the Switch itself, uses USB-C. Even still, this is much better than some other third-party controllers I used that would forget what they were paired to, or would be really difficult to get paired properly the first time.

The PDP Afterglow Wireless Deluxe Controller for the Nintendo Switch is a fine Pro Controller replacement, or supplement if you already have a primary Pro Controller. If you are trying to kit out four controllers for Mario Kart, and you want some extras for others with big hands, the Afterglow is a great choice. In my testing, motion controls work perfectly. It's also great if you want a Pro-style controller for a younger player, as many kids love bright colors. (It works as expected on Steam via Nintendo Switch Pro Controller support if you wish to use it for that.) If you don't want to pay full price for Nintendo's offering, and you want something sturdy that will last, and HD Rumble isn't important to you, then I highly recommend you check out PDP's latest controller.