Thank you Ematic for sending us this controller to review!

We are a multi-Switch household, and have lots of gaming PCs everywhere, so you can really never have enough controllers. We have enough so a small army could come by and enjoy some multiplayer mayhem together. However, the vast majority of those are for PC/Xbox or PlayStation consoles; on Switch, we have three sets of Joy-Cons (one for each Switch, and one extra) and one Pro Controller. We also have the Wii U GameCube controller adapter, which works great for Smash, but not for every game. So there is always a need for a good backup controller for adults or those who dislike tiny buttons. 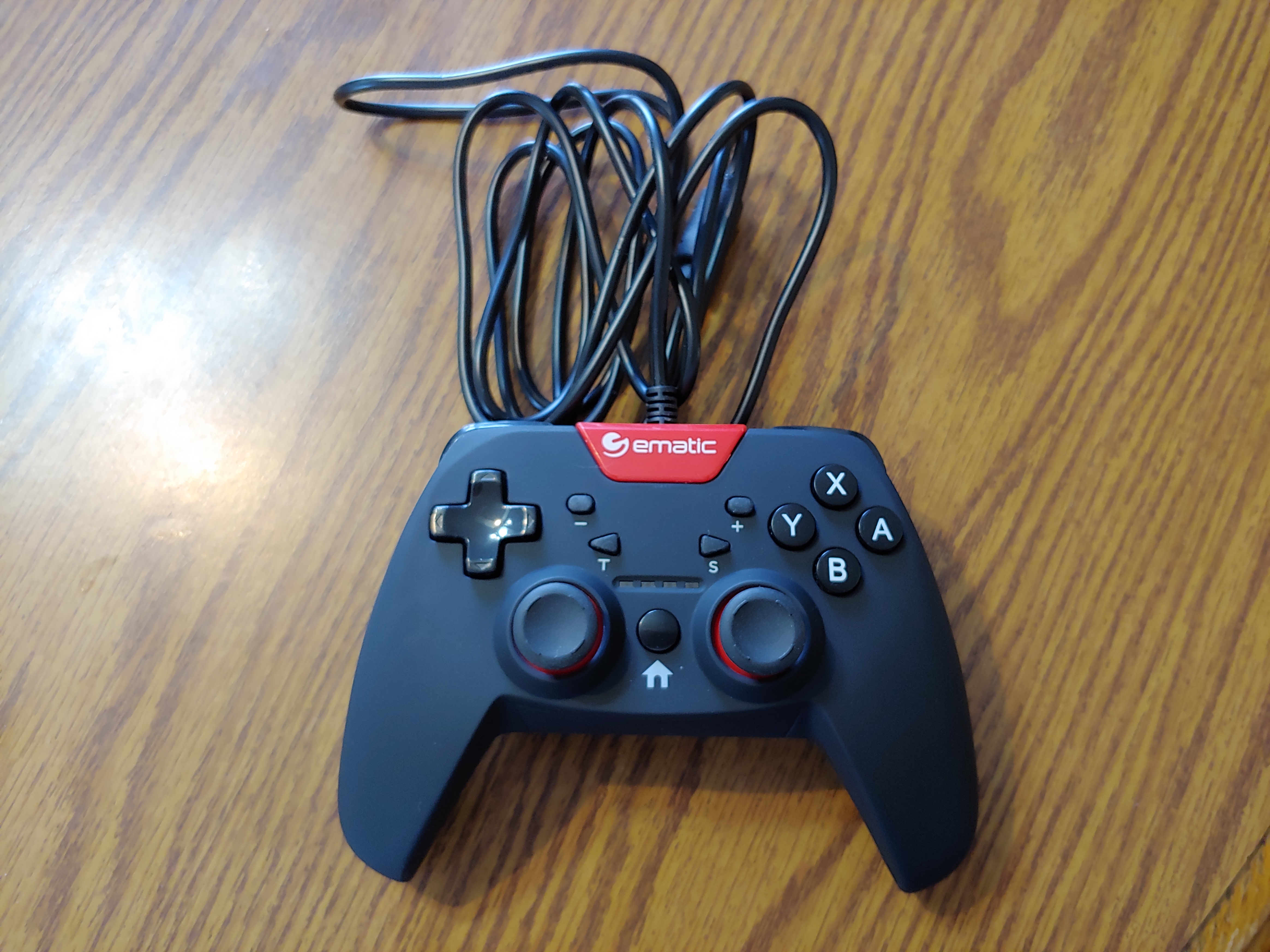 Strong Points: Very competitive price; seems durable; comfortable to hold; more logically-placed home button than Nintendo chose; PC compatible (if you enable Nintendo Switch controller support in Steam); if you prefer the PlayStation button layout, this is a controller for you
Weak Points: No gyro support; no amiibo support; looks very basic; D-pad requires more force to press than most controllers; buttons feel kind of cheap, but work fine; RT and LT buttons have a long throw, but only activate when fully depressed; 7.2 feet (~2.2 meters) is a decent length, but really could be longer

Enter Ematic. For the very reasonable price of $19.99, you can order this most basic of Switch Pro Controller clones that does most of what you expect it to do. The sticks feel nice and work well, and use the PlayStation layout, with the D-pad in the upper left position, and the two analog sticks centered. The buttons and triggers are decent as well, though require just a tad more force than you might otherwise expect. It's not terrible, though. The triggers feel good, but are not analog (which is as expected for a Switch controller), even though the triggers have a significant range of motion, similar to Xbox or PlayStation controllers that do have analog triggers. The D-pad feels kind of cheap, but works well enough. My main complaint is that it requires more force than some controllers to activate, though to be fair, you could say the same about the Switch Pro Controller.

Other than being wireless, the Switch Pro Controller does have some significant advantages over this, though. For one thing, it has an amiibo reader. (Okay, that's a joke. It doesn't have an amiibo reader, but that's not a big deal.) The bigger deal is motion controls. While most games work just fine without it, most first-party titles have some form of motion controls. Mario and Zelda come to mind. For other games, like Super Smash Bros. Ultimate, motion controls don't matter. The Ematic controller lacks the gyro/motion control function entirely. It's a real shame, and you really miss it in Zelda: Breath of the Wild. 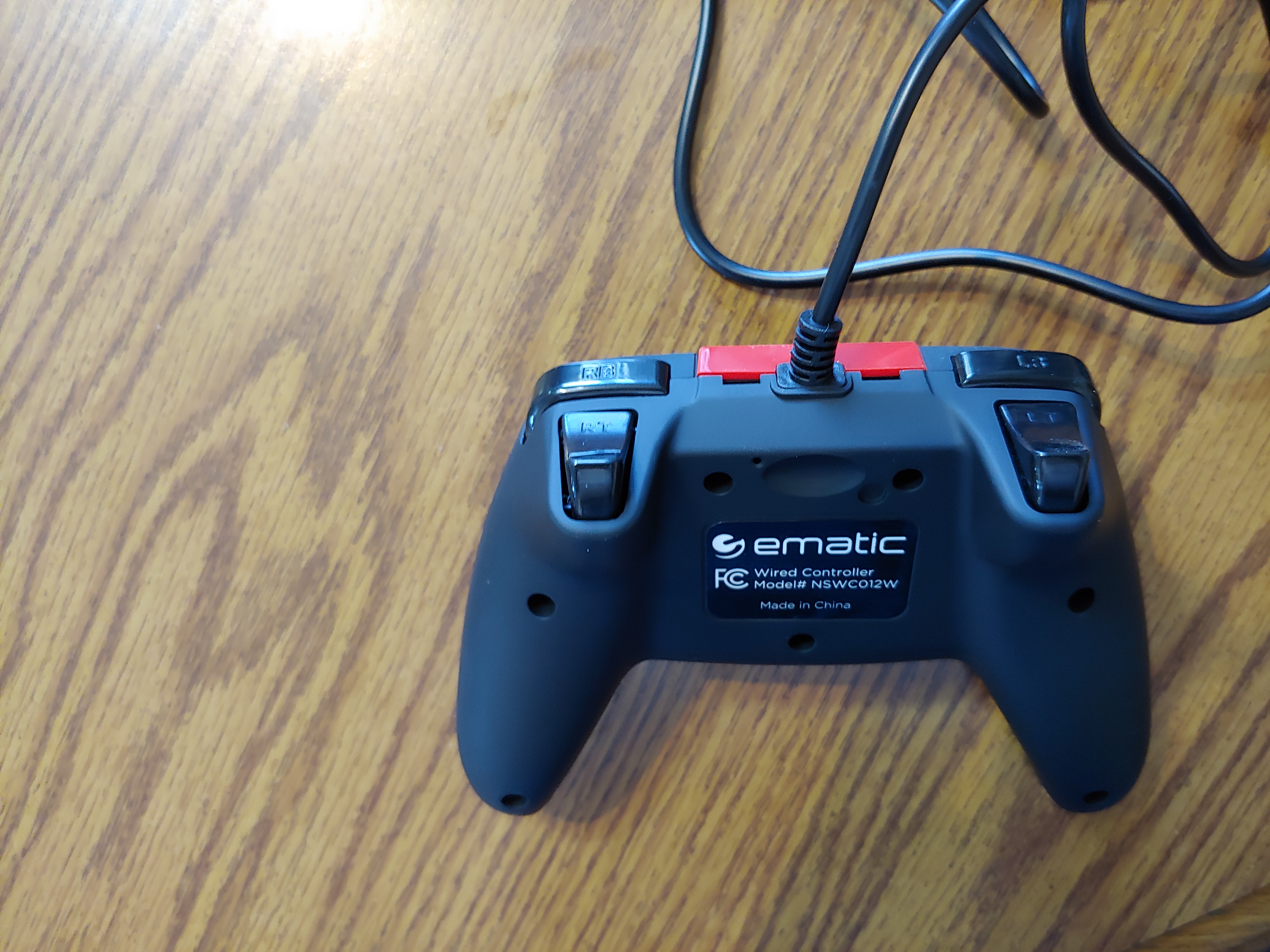 Other than the motion control issue, the Ematic controller does the job.  It certainly feels cheaper than the stock controller, but nowhere near as bad as some of my older third-party controllers, like the Rock Candy PS3 controllers I picked up several years ago; those things feel like one drop away from cracking open, while this one has a fairly sturdy shell, and seems like it could take a few licks.  Overall, while the lack of motion control is disappointing, and the cord could use a few more feet, it is a very good value for the price.  If you are looking for an inexpensive controller for young kids or guest players, you can't go wrong with this Ematic Wired N-Switch Controller.