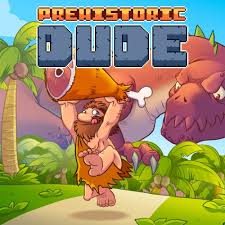 A caveman referred to as Dude was about to enjoy a nice ham lunch when a giant dinosaur ran off with it. Without any hesitation, the caveman pursued the dinosaur to take back what was rightfully his. It’s not a deep story, but it works for this quaint title.

Prehistoric Dude is a 2D platformer game where the main character has to traverse different areas and conquer many obstacles to get his ham meal back. In the beginning, he doesn’t have many abilities or much health or stamina. In fact, he doesn’t even start off with a club. Until he gets that typical caveman accessory, Dude is limited to using throwing axes.

As Dude walks through the tall grass, throwing axes, fruit, and meat can be found and added to his inventory.  Collecting fruit is necessary for opening up doors blocking treasure chests. Many of these doors require 100 pieces of fruit to get unlocked.  The kicker is that with each death, Dude loses half the amount of fruit he was carrying.  If you pause the game you can see the number of times you’ve died and how many enemies you have killed.

At first, Dude has two health and stamina bars. Throughout the game you’ll find plenty of power-ups to increase both stats. These items are often behind doors that require you to flip every switch on a level or to defeat all of the enemies. Sometimes, both requirements have to be met! A few of the levels have doors that can only be unlocked with a silver key.

Many handy abilities can be acquired as you explore the levels. There’s a nice map that you can pull up to see where you’ve been and which areas have yet to be explored. The mountaineer gloves allow you to hold onto and jump off of walls. The bamboo stick lets you breathe underwater. One of the most useful abilities is double-jumping. On the flip side, there’s a dash ability, but I’ve never used it. 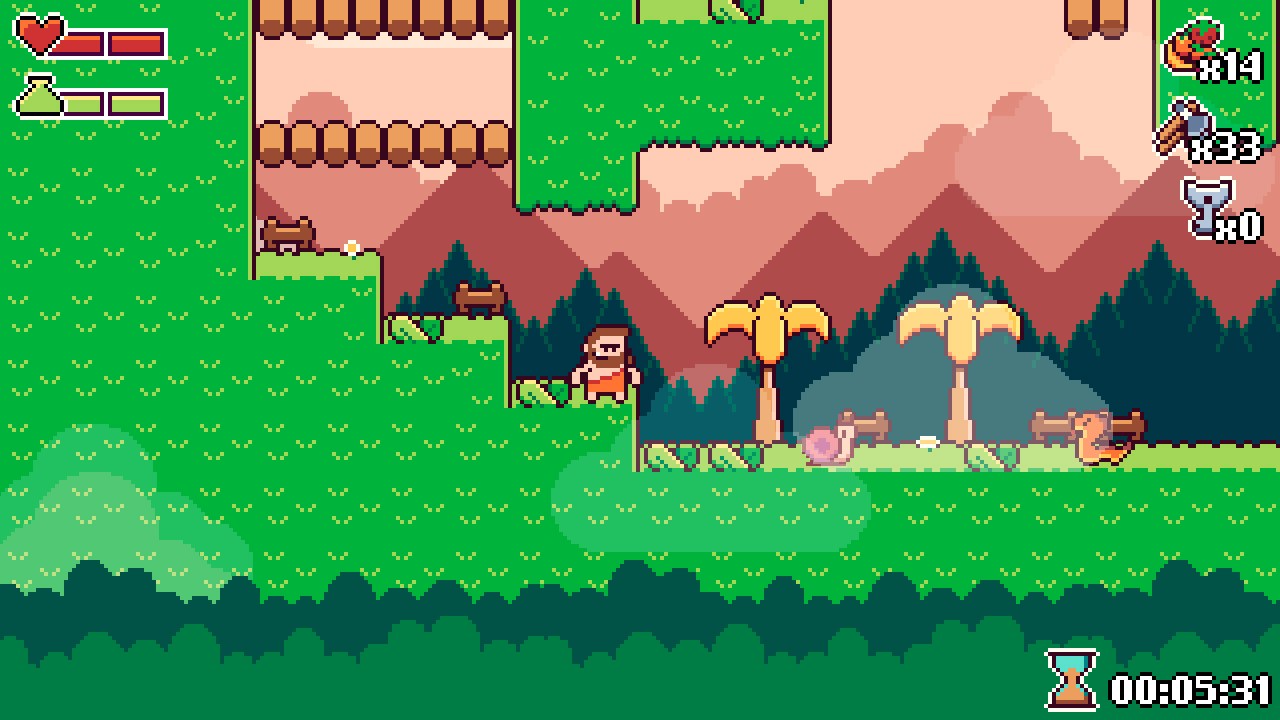 Like many platformers, there are plenty of enemies and obstacles to face. Some of the enemies merely walk around while others shoot projectiles. The dinosaur bosses are big and require different methods to defeat them. The first boss cannot be damaged with the club or throwing axes. You have to use the environment to do damage to it. The final boss took me two tries to take it down because the game glitched and crashed on me the first time. Sadly, that was not the first bug I ran into. On my Twitch stream of this game, the Switch errored out and crashed within the first couple of minutes.

The retro visuals and chiptune music are cute. I like how the levels have different themes and sometimes have rain in them. The sound effects and background music are fitting and sound good.

Other than cartoon violence, there’s little to complain about morally.

I beat this game in three hours and there are options to have it show a speed run counter. There are no difficulty settings and once you defeat the final boss and find all twenty of the treasure chests, there is little reason to come back to this title. The asking price is $4.99 which is reasonable.