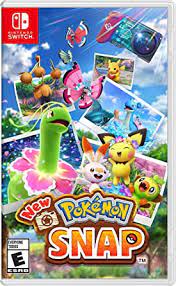 It's been 3000 years—wait that's not right, it’s only been 22 years. Two decades is still a long time between releases. Four Nintendo consoles and seven Pokemon generations have been released since then, so New Pokemon Snap has a lot to cover. Instead of being developed by HAL Labs, like how N64’s Pokemon Snap was, Bandai Namco Studios handles this much-anticipated sequel.

In the Lental region, you play as either a boy or girl under the tutelage of Professor Mirror. A mysterious phenomenon called Illumina is affecting the Pokemon on the various islands within Lental. You, as well as a few others, must survey the islands to figure out the cause of the unknown affliction.

New Pokemon Snap is a combination of a rail shooter (as weird as it sounds) and a simulation. The main goal is to go along a predetermined path in a first-person perspective, taking pictures of Pokemon. I don’t think it could be any simpler to explain. You’ll witness Pokemon interact in their natural environment and taking better photos equals a better score. At the end of each course, Professor Mirror will judge your photos and give them an appropriate value. Generally, Pokemon walking around will get you a decent score while more active animations, scenery, and even multiple Pokemon in the same shot will grant a higher score. You can only choose one shot per Pokemon featured (the featured Pokemon in the photo is typically highlighted by the cursor) so make sure you choose the best one. 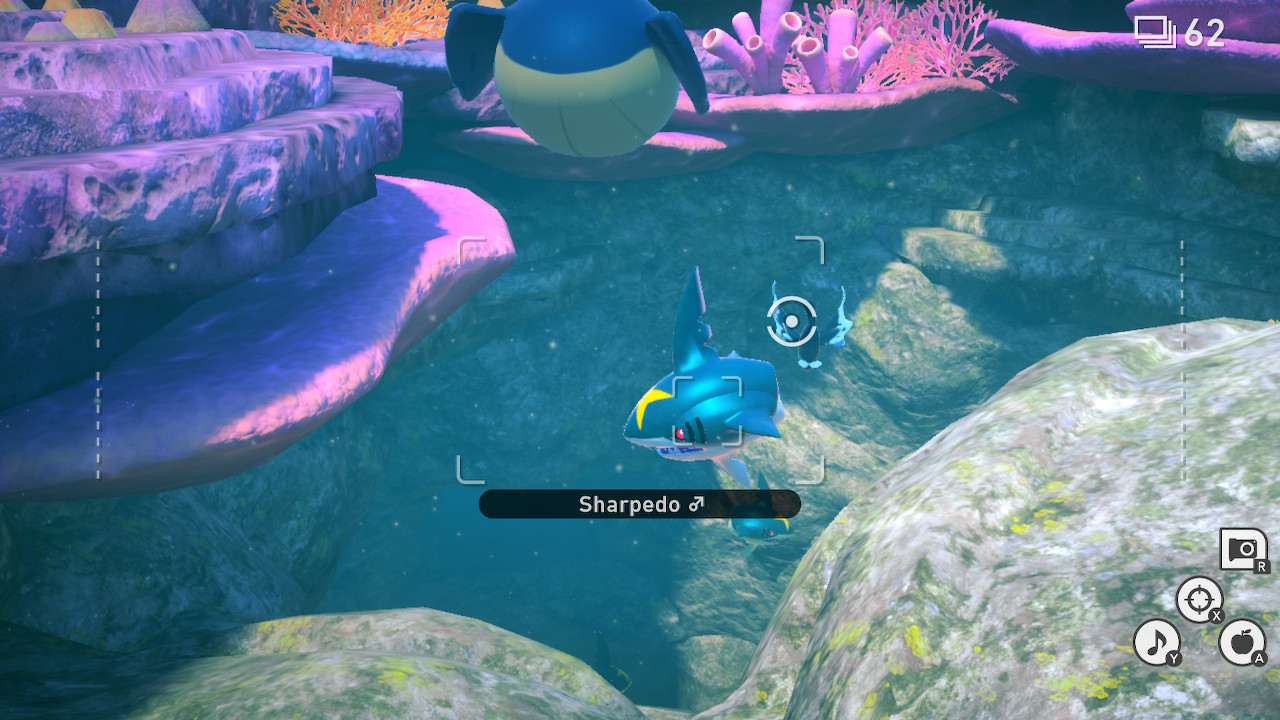 Strong Points: Tons of secrets to discover; seeing Pokemon interact like the Pokedex entries stated in the mainline entries; many improvements to the original entry
Weak Points: Music is generic; missions/request system could use some refinement
Moral Warnings: None

While on the courses, the left control stick aims the cursor for precision while the right control stick looks around in a 360-degree field so you can aim all over. There are four different control options within the options menu with two each working for left-handed and right-handed individuals. As you progress through the game, more of your controls become available such as the option to throw Fluffruit (they look like apples), Illumina orbs, play a melody, or scan your surroundings. All of these options affect Pokemon in different ways. There is also the option for gyro controls, and when the Switch is in handheld mode, you would move the console around just like a camera. They are disabled by default, as they do take some time to get used to. However, I found them to be very engaging and immersive for the experience once I got it down. I would highly recommend trying it out.

The original Pokemon Snap, while a very fun game for fans of the series, didn’t have much meat to it. Anyone could 100% it in less than four hours if they wanted to. I can safely say that New Pokemon Snap will take around double that time just to simply see the credits. Not only are there 214 Pokemon to snap pictures of compared to N64’s 63, but each Pokemon has four tiers of photos ranging from one star to four. Finding specific Pokemon or getting four stars can get downright cryptic at times. Areas can level up to a max of four times with the points accumulated during expeditions. Each area also has day and night variants. The higher the level, the more Pokemon there are and the greater opportunity you have to take higher starred photos. Alternate paths exist by fulfilling certain tasks such as leading specific Pokemon to a specific area, as well as secret Pokemon within the courses. There are also missions/requests that the characters want you to complete on your expeditions. One thing that I don’t like about the missions is that you can accomplish the prerequisite, but if you don’t have that mission beforehand, you’ll have to do it again.

Seeing the Pokemon in their habitats is something special. It’s also much needed as the more recent mainline entries by Game Freak are focusing on very specific things such as the battling and human-to-Pokemon interactions. You’ll hear of Pokemon interactions within the Pokedex but rarely will see them. That’s why I feel spin-offs are important. Seeing a Pichu and a Grookey play with each other throughout the course, and at the end sleeping soundly next to a Torterra brought a smile to my face. The environments have great variety between each other as you’ll go through forests, snowy mountains, beaches, reefs, caves, and volcanoes. The selection of Pokemon for each of these areas is great as well and fits the environment. 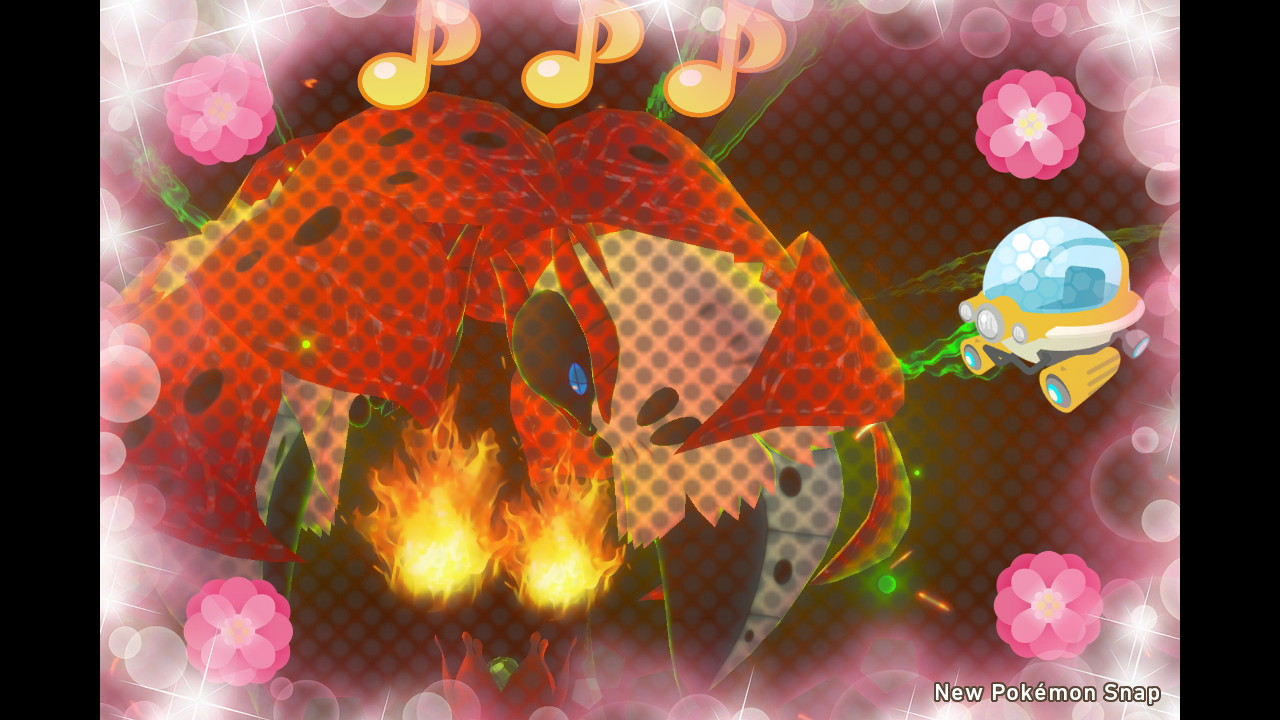 In contrast to the mainline entries and anime, New Pokemon Snap uses more animal-like sounds instead of distinct cries or Pokemon saying their name (Pikachu is one of the few exceptions to this rule). I like this direction because it makes you feel more like you’re on a safari, analyzing Pokemon in the wild. There’s even voice acting for this entry which was a surprise to me. What I wasn’t too hot on was the music. It’s not bad, but it’s just so generic sounding that I cannot remember even one track from New Pokemon Snap. The soundtrack is just very forgettable. That’s one aspect N64 has over New Pokemon Snap—that entry had some memorable music, even if nearly every track were 30-second loops.

When progressing through the game, whether that is completing missions or unlocking new areas, you’ll gain features for the photo editing mode. You can set filters, frames, and various other stuff in this mode and share them online. The mode is surprisingly detailed for something that’s purely optional. Of course, with a feature like this, there are bound to be others who will use this for inappropriate measures. As of right now, the system is working well to prevent suggestive photos from appearing, as one questionable photo I saw through the online service was swiftly removed. Be wary if you let especially young children interact with the online portions.

With numerous improvements to the original formula and great interactions between Pokemon, New Pokemon Snap proves that the picture-taking safari concept can still exist in this modern era of gaming. This entry may mostly appeal to and target the existing Pokemon audience, but I could also see someone interested in photography getting satisfaction out of it it. I can even see it as an introduction to the rail shooter genre. If you value a relaxing adventure observing strange creatures, this safari is worth the $60 admission. There are plenty of secrets to discover and wonders to be had that full completion will take 20 hours or even more. New Pokemon Snap is a worthy sequel to a beloved classic whether you played the original or are just looking for a unique experience.