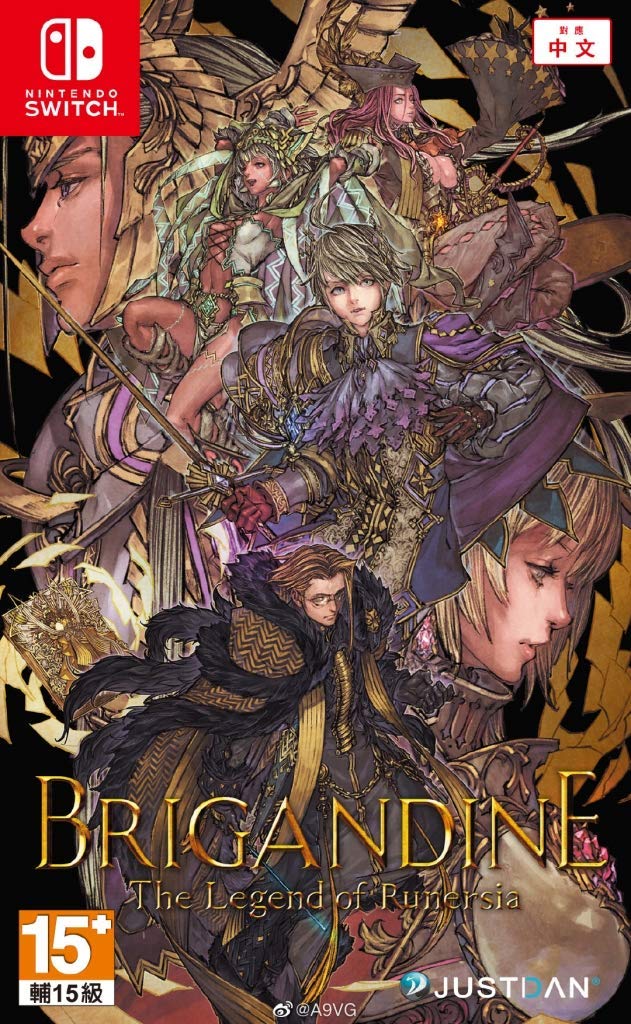 I would like to thank Happinet Corporation for giving us a copy of the game to review. Thank you!

Mana falls from the sky in the land of Runersia, bringing with it great fortune and power. The Rune god is praised for giving humanity the gift of mana. The people collected the mana and created the five Brigandine: Justice, Sanctity, Freedom, Glory, and Ego. These tools of immense power allowed the users magical powers and the ability to summon monsters to fight for them. All out war erupts, dividing the land in 6, each with a plan to unite Runersia under one banner. Surely this wasn't what the Rune god intended?

Brigandine The Legend of Runersia is a strategy game where the player takes control of one of six powers with the goal to take over all of Runersia. Each overworld turn consists of two phases. The first phase consists of recruiting and upgrading monsters and generals, completing quests, and moving generals. The second phase is for launching attacks on neighboring nations. Once a place is decided, each battle is resolved through turn-based hexagon tactics and strategy. The most generals that can go into one battle are three. You can also send your king or queen into combat as a general. Each general will have its own set of monsters that were recruited for them. If the general is defeated, the monsters following them retreat or stop battling. There are three ways to win a battle: defeat the leader, defeat all generals, or have the generals retreat. 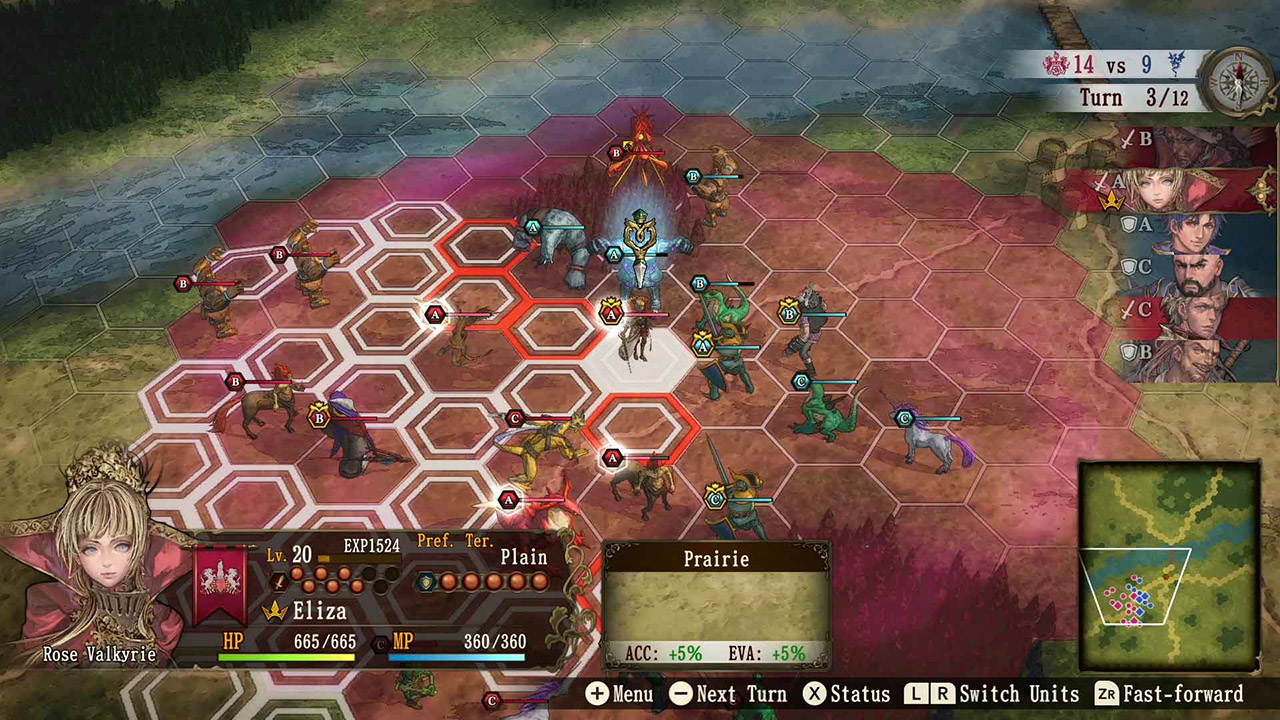 I've found that enemies will rarely attack if I keep my power score high enough on a bordering town. Power score is determined by my generals and monsters, so as long as I kept my generals' rosters full, I was untouchable. In addition, battles take quite a bit of time; if my battle lines would ever stretch thin, I found it more time saving to abandon land I can't defend and claim it back later when I have a better chance. Due to this, the only battles I did were attacks, never defending. Even with this strategy in mind and playing on easy, the game drags on for longer than I like. Every piece of land is a battle, and there are over 30 battles needed to beat a campaign in the best case scenario. In the beginning, the game offered interesting story tidbits and occasional character interaction, but it didn't last long. After taking about 5 lands, the only unique interactions were leader battles and defeating nations.

Even on easy with enemy units blindly attacking, they put up good fights in some battles. I imagine if I were on a harder difficulty, I would have to assign generals quests for items. I was never short on mana, and no matter how often I waged war, I always had enough mana to completely refill my roster. Unfortunately, the campaign is slow. Each battle takes roughly twenty minutes to half an hour to complete and sometimes the battles are back-to-back if multiple attacks are announced.

The story elements are few and far between. The beginning of the storyline drew me in with interesting characters, but after the initial introductions, story elements had to be earned by defeating other nations. The story's focus shifted part way through, from trying to conquer all Runersia to settling a dispute between the Rune god and his daughter by killing one of them. The game expresses itself through Japanese voice acting and its art style, along with supporting text. I notice the controls sometimes kept moving despite the releases the Joy-con stick, but I'm not sure if that was my Joy-con or the game. 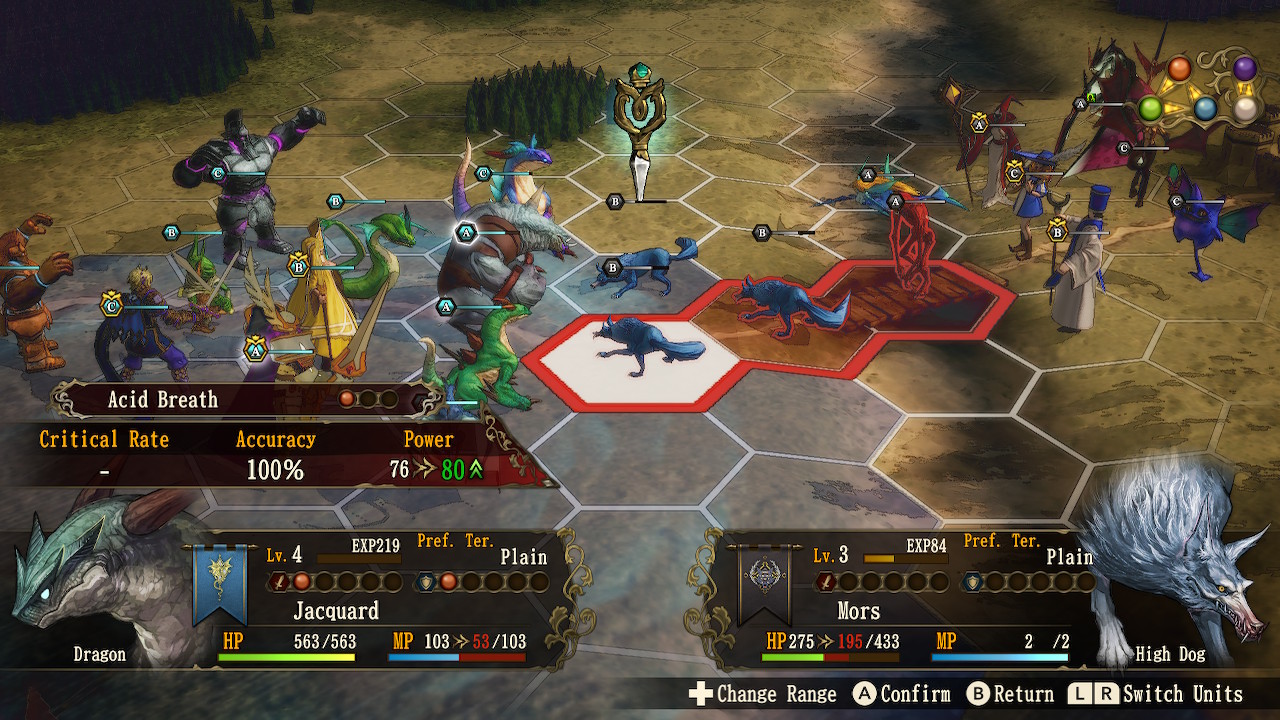 There are a few female characters dressed in inappropriate and impractical clothing. Coco and her husband take turns joking about leaving each other for someone younger and hit on other characters. Jazz introduces herself as an "artist of the skin" and couldn't get Tim to take his clothes off. Ginger, Tim's sister, immediately panics, but Jazz clarifies that she's a tattoo artist. One of the characters from the Shinobi tribe is a man wearing a dress. Generals are capable of hiring angels and demons into their army. Noll was required to kill all his siblings to earn the right to become an assassin.

The Rune god was attracted to a female human, so he murdered her husband, took control of her body, and impregnated her. The woman killed herself, but the child was born anyways and raised by a group of witches. When she learns of her origin, she decides to use her power and a creature called a Zoar to try to kill the Rune god. Sin Gustav, a boy who died long ago, had his spirit raised from the dead by a group of sorcerers mixing their blood with his. His spirit wandered until it took control of a puppet to aide Tim. God's name is used in vain, although it could be the Rune god's name they meant.

The game is bug free except for maybe a controller bug, but the battles don't feel fun. While the game's story was interesting, it's not for everyone. Moral issues are in almost every cutscene. Voice acting and art are great, but not enough to carry the game. I wouldn't recommend this to anyone unless they want a challenge and an excess of patience.