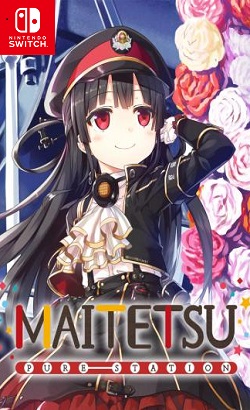 Thank you Circle Ent. for sending us a review code!

Sotetsu was involved in a terrible train accident as a child. He lost his parents and his twin sister when the steam locomotive derailed. The Migita family adopted him and they run a shochu distillery in the town of Ohitoyo. In order to make great shochu, you need a clean water source and the main river is in danger of being polluted if the proposed Aircra (automated aircraft) factory is built. Upon hearing about the factory, Sotetsu takes a break from school (assuming college) and returns to his hometown to stop it from happening.

The proposed factory promises this quiet town some jobs and income, but there has to be another way. While making himself at home, Sotetsu helps clean out his deceased grandfather’s room and discovers an abandoned Raillord in it. Raillords are life-like automatons that drive and maintain various trains. Hachiroko, is the name of the Raillord that Sotetsu discovers and she’s in charge of the 8620 steam locomotive. 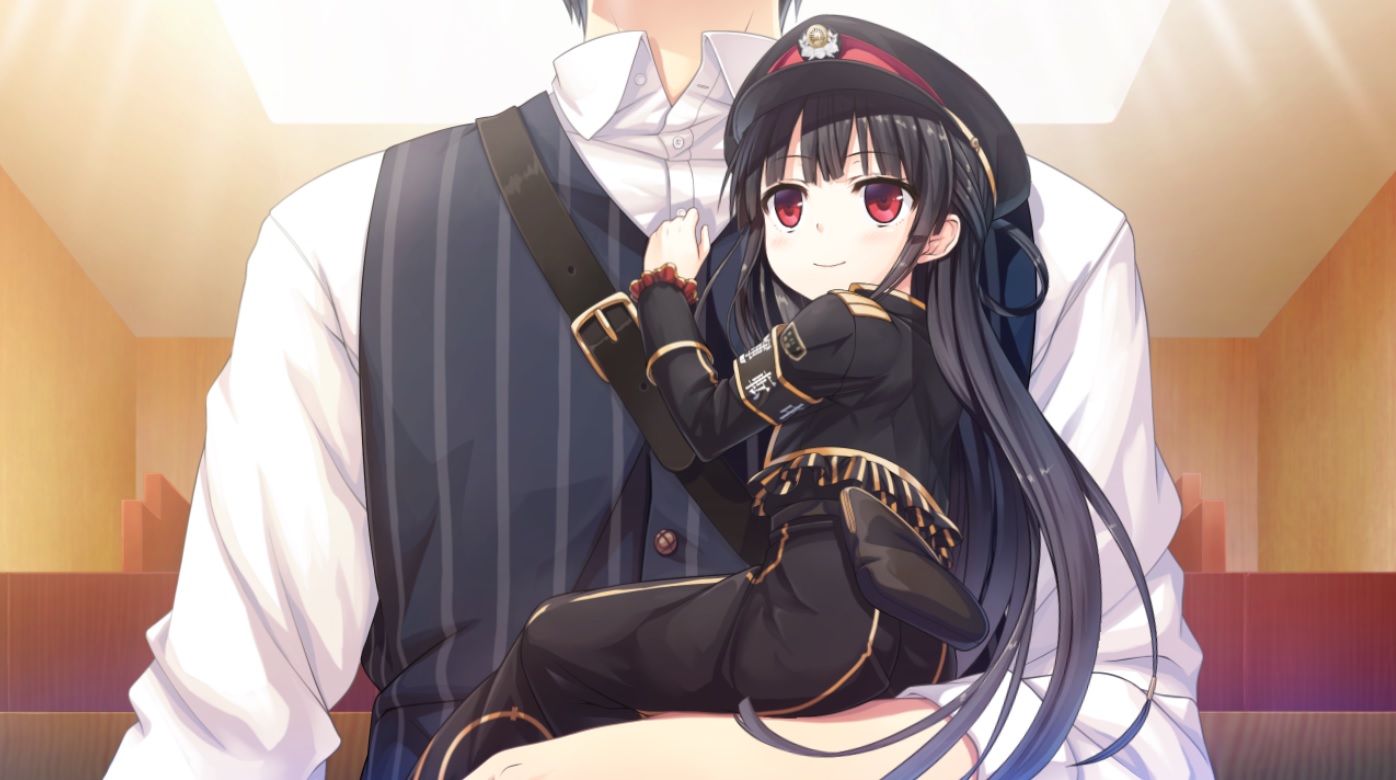 As much as Sotetsu fears trains, Hachiroko and the 8620 are key in revitalizing this town and bringing jobs and tourists back into it. Throughout the various routes, Sotetsu will learn about himself, his hometown, and the strengths of his romantic partner of his choice. There are three built-in romance options/routes and the others are unlocked and launchable from the main menu. Other than the three options, there is no user interaction other than reading and advancing to the next slide/page. While the automatic mode can be nice, it’s extremely annoying because I constantly had to disable it every couple of minutes (and sometimes more than that!). Though the automated scrolling pace can be adjusted, it was still too quick for me despite being a fast reader.

Each route has Sotetsu revitalizing the town with different methods and resulting obstacles. He can convert an abandoned coal mine to a theme park, connect to other cities through the railways, or expand the town’s tourist attractions. The three built-in routes are the most fleshed out and in comparison, the additional routes feel rushed. I often finished the add-on routes in one or two sittings.

I like how each of the main routes have their own theme music to them. All of the routes are fully voice acted in Japanese and are well done. There are multiple font options but I didn't see a way to increase the font size. The text is pretty small on the Switch's screen.

The romance options are a little weird as there are only a couple of socially acceptable dating options. The three main choices are your younger adopted sister, Hibiki, Hachiroko the Raillord, or Paulette the town’s mayor. Dating your older and more endowed sister is a menu option and that route suggests that they are intimate without any mention of being married. Reina is another Raillord and she talks and looks like a little girl. Despite drinking from a sippy cup, Reina is datable and accepts Sotetsu’s marriage proposal. Most of the routes end with marriage proposals and don’t go any further than kissing. 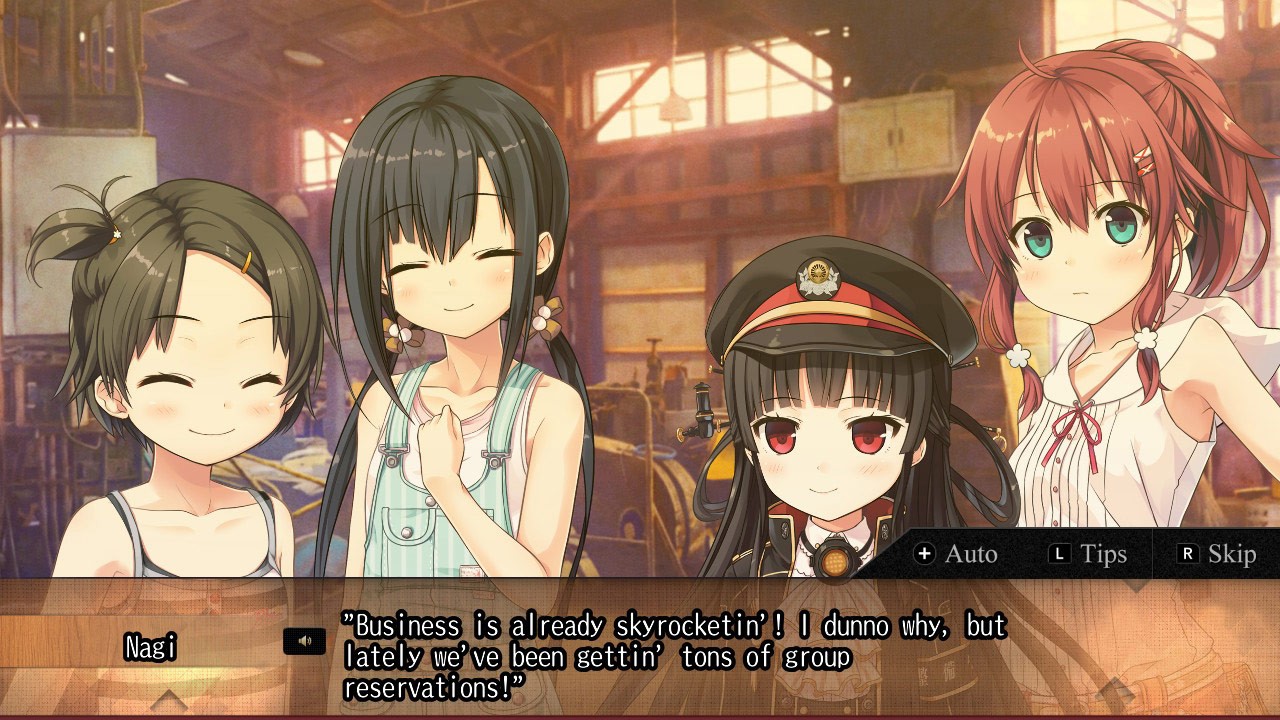 One route involves two younger schoolgirls. They obviously have a crush on Sotetsu and invite him to go on a field trip with them. Though they don’t officially “date” they intend on taking more field trips together in the near future. Hibiki (the younger sister) is only fifteen or sixteen years old, which is apparently old enough to run for mayor.

Other moral issues worth noting is some mild language including d*mn and *ss. There’s a ghost shrine in town and its priest is a friend to all of the characters in the story. With Sotetsu’s family business of running an alcohol distillery, there are plenty of alcohol references and some scenes with drunkenness. Bathing scenes are commonplace as putting coal in the train’s furnace is a messy job. Surprisingly, the baths in the game are co-ed. Though nothing is seen, there are story sequences with Sotetsu getting an eyeful. There are some images with panty shots and other revealing poses. In one of the routes, a character is revealed as a cross dresser.

While Maitetsu is not as polished as other visual novels I have played, it’s still an enjoyable experience. I don’t think it’s worth the $20 premium over the PC version. I must admit that I am curious if it has the same glitch of constantly enabling the auto scrolling mode. If not, I would recommend the PC version wholeheartedly as long as you don’t mind the odd dating choices and other moral issues.