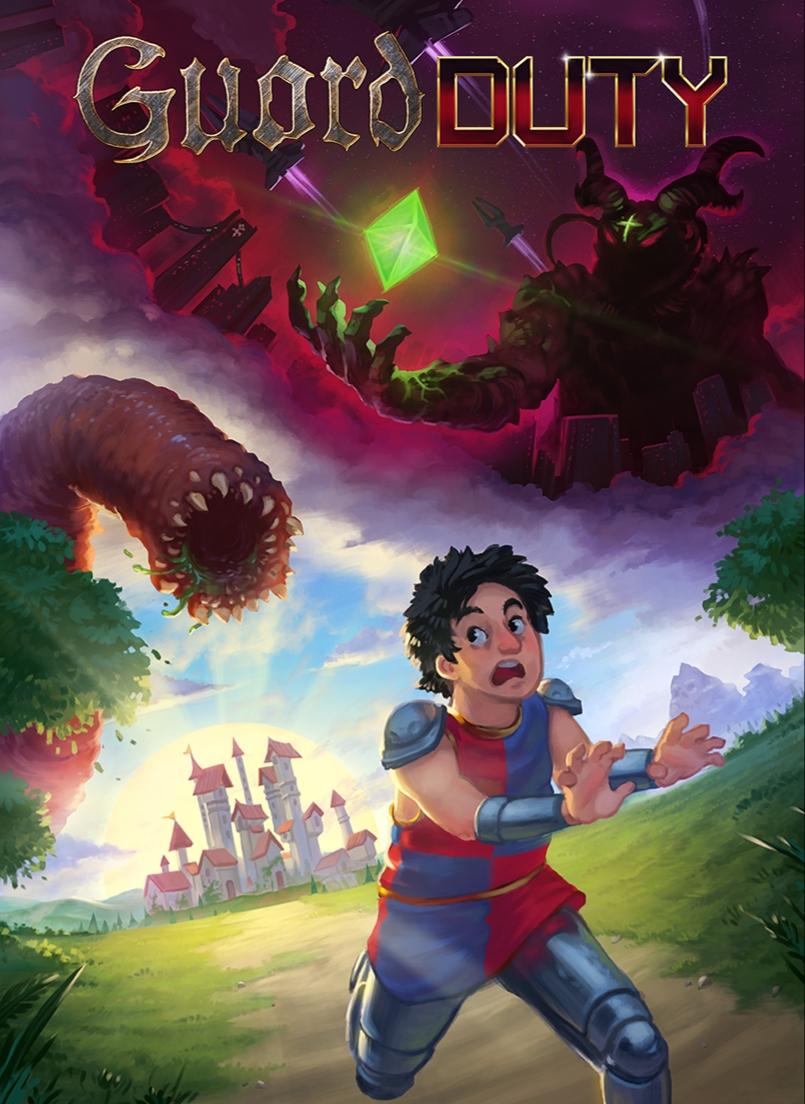 Thanks to Ratalaika Games for the code for this game!

Guard Duty is a game based on an interesting concept that drew me in as a gamer almost immediately. The setup is this: one day, you the guard, are having a bad day. You have a bit too much to drink, and the next thing you know, an evil person has slipped into the kingdom, and taken the princess. This event has consequences even far into the future, which you can only guess at. So, the game begins, going back in time to Tondbert. Throughout the game, you go through two different time periods- a medieval-like era and a futuristic-like era. You play as Tondbert in the medieval part of the game, and as Agent Starborn in the futuristic era.

The game begins in a very frightening way with a headshot of a demon and then launches you back into the thousand years in the past plot. I have to admit that this introduction scared me even though I am an adult as the creature looked very frightening. So for starters, I would definitely not recommend this to a sensitive gamer, or a younger one; unless the parents are willing to play past this intro. As the game progresses, you are introduced to Tondbert, and your first task is to get out of your room into the castle. Easy, right? 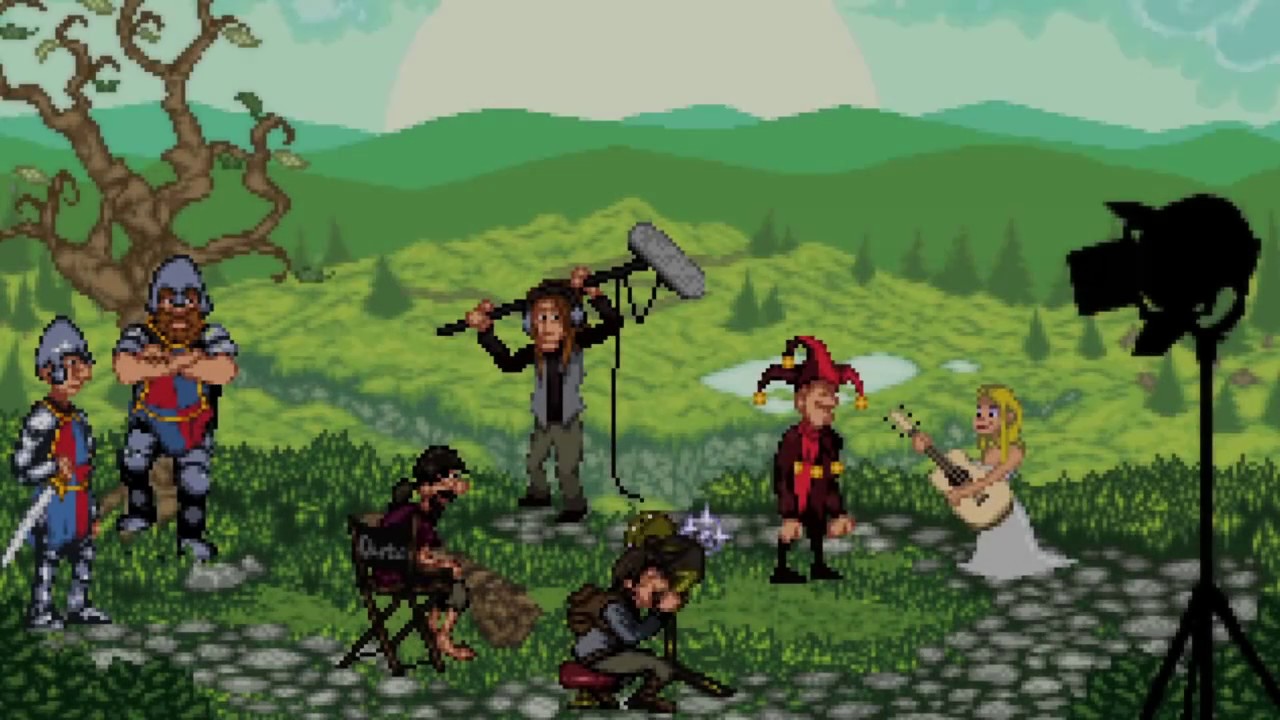 Not as easy as it looks. The game does explain what you are to do and there are cursors that point to things, but getting out of Tondbert's room is not immediately obvious. I then realized that this was a click-and-point adventure, as opposed to the free-style form of controls I am used to. After moving the cursor to various places in the room, I was finally able to figure out that Tondbert needed to use the rope to jump out of his room. Doing so leads to him getting stung by bees, and then to a hilarious string of events that lead to Tondbert retrieving his armor so he can get back into the castle.

Graphics and gameplay are one of the game's strong suits. Visually, it is is very pleasing. The pixelated graphics remind me a lot of PC games in the 1990s, which Guard Duty appears to be a tribute to. The soundtrack and effects of the game are splendid. The music in the earlier period was more pleasing to me, and has a typical medieval-fantasy feel. The futuristic music was not as pleasing to the ears, nor was it as easy on the eyes. The voice acting is also superb. Tondbert's voice is very funny, especially when he gets stung by bees. All of the characters are voiced uniquely and all feel like unique individuals. One of my favorites was Gertrude, one of the drunken old women in the medieval marketplace who won't give Tondbert back his trousers unless he kisses her. The way he kisses her is very humorous but also somewhat inappropriate for younger gamers.

From here out, the game splits into three parts: Act I: Royal Blood, Act II: The Great Outdoors, and Act III: Guardian Duty. Acts I and II take place in the medieval world, and Act III in the future. Though a good game, it's a very short one, but at 9.99, is not a waste of money. 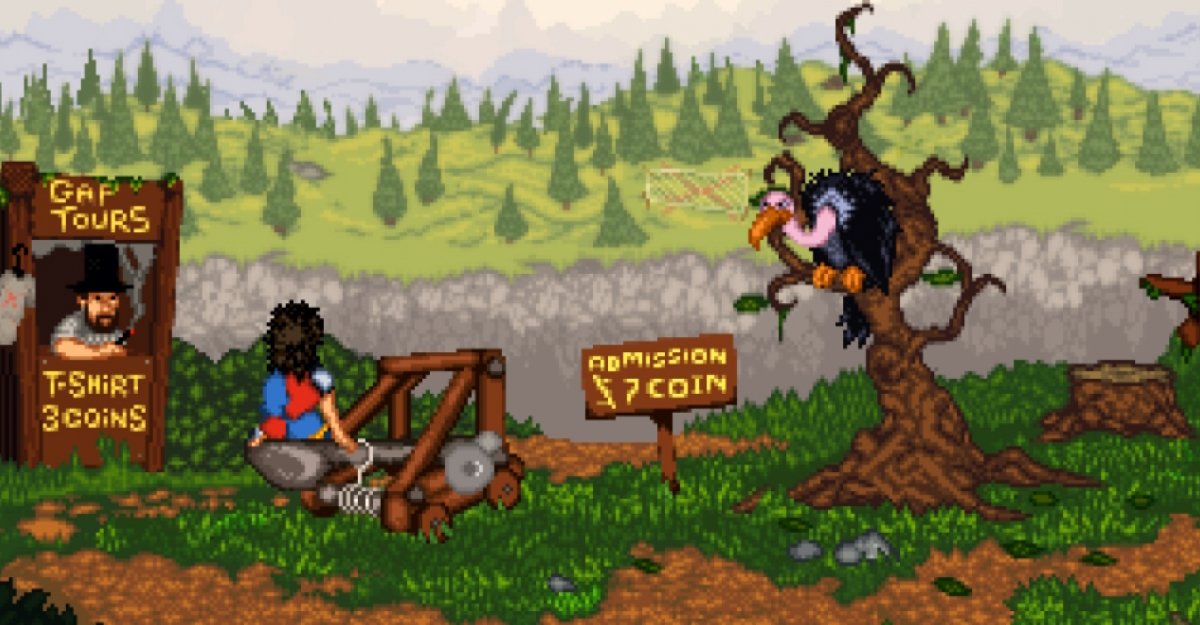 How does the game hold up morally? Unfortunately, this is where I have my doubts and have to caution. Alcohol references abound: Tondbert is an alcoholic, and is even known to spend all his money at the Drunken Monk. The game has partial nudity, as it starts with Tondbert in nothing but his underwear, and his buttock cheeks are very visible. Definitely not for younger gamers. The scene with Gertrude involves a frog turning into a prince and explicit sexual references; fortunately, they are censored out. Where Guard Duty really drops the ball, though, is the occult. The game even opens with a demon and a reference to Hell. The character in the future tells the demon to go to Hell, and the demon says 'You know, I'd rather not go back". One of the characters Tondbert runs into in the bar that has information on the princess references making deals with Satan, and has an occultic book on him that you are required to take to progress into the game.

On the positive side, this does treat the occult and demons as real and the consequences of messing with the occult, so I can give it a plus 3 on that. However, I was uncomfortable with the obvious references to demons and Satan, especially as this takes place in a world without God, only 'gods.'

Can I recommend Guard Duty? From a gaming perspective, yes. It's got a fun soundtrack, easy gameplay once you get the hang of it, funny characters, and an interesting perspective. But the demons and Devil were too much for me. Definitely not for children.