Thank you Ratalaika Games S.L. for providing us with a review code!

Rural settings can be brutal for people, as they can breed a sense of hopelessness. Secrets don’t stay secret for long, you’re far away from the hustle and bustle, and the people who “failed at life” tend to seep their toxic fangs into the young, instilling the same sense of negativity they hold. When people feel like they’re all alone in the world, they believe they can only depend on themselves. The Prince of Landis by Lorestrome is not a good tale (as in uplifting, not quality) as it peers into the underbelly of rural life.

Our protagonist, Evan, does not have a good life. He’s constantly bullied by the school jock Jason, who takes out his frustrations on the tiny victim, for what he likes to call “collecting his dipsh*t/f*g tax” (PS5 version defaulted to the former for me.) After being physically assaulted, Evan continues to be bullied by his deadbeat and drunken father. Usually, Evan’s dad subjects him to verbal abuse, but every once in a while hits him too as punishment for never standing up to the bullies (although Evan’s dad never teaches him how). Evan has a very low opinion of himself as he never has anyone to confide in, yet tries to see the good in people.

After hearing a strange loud crash in the middle of the night, Evan sneaks past his wasted father and travels deep into the woods, where he finds a crashed alien spaceship. The alien introduces himself as The Guest, and says that he requires nutrients and materials to fix his spaceship. Evan feels compelled to help out the alien, possibly both out of fear and a sense of feeling useful to someone. Evan proceeds to continue on his day of attending school, getting bullied, and walking home alone. Although now, he has another purpose in helping out someone in need. 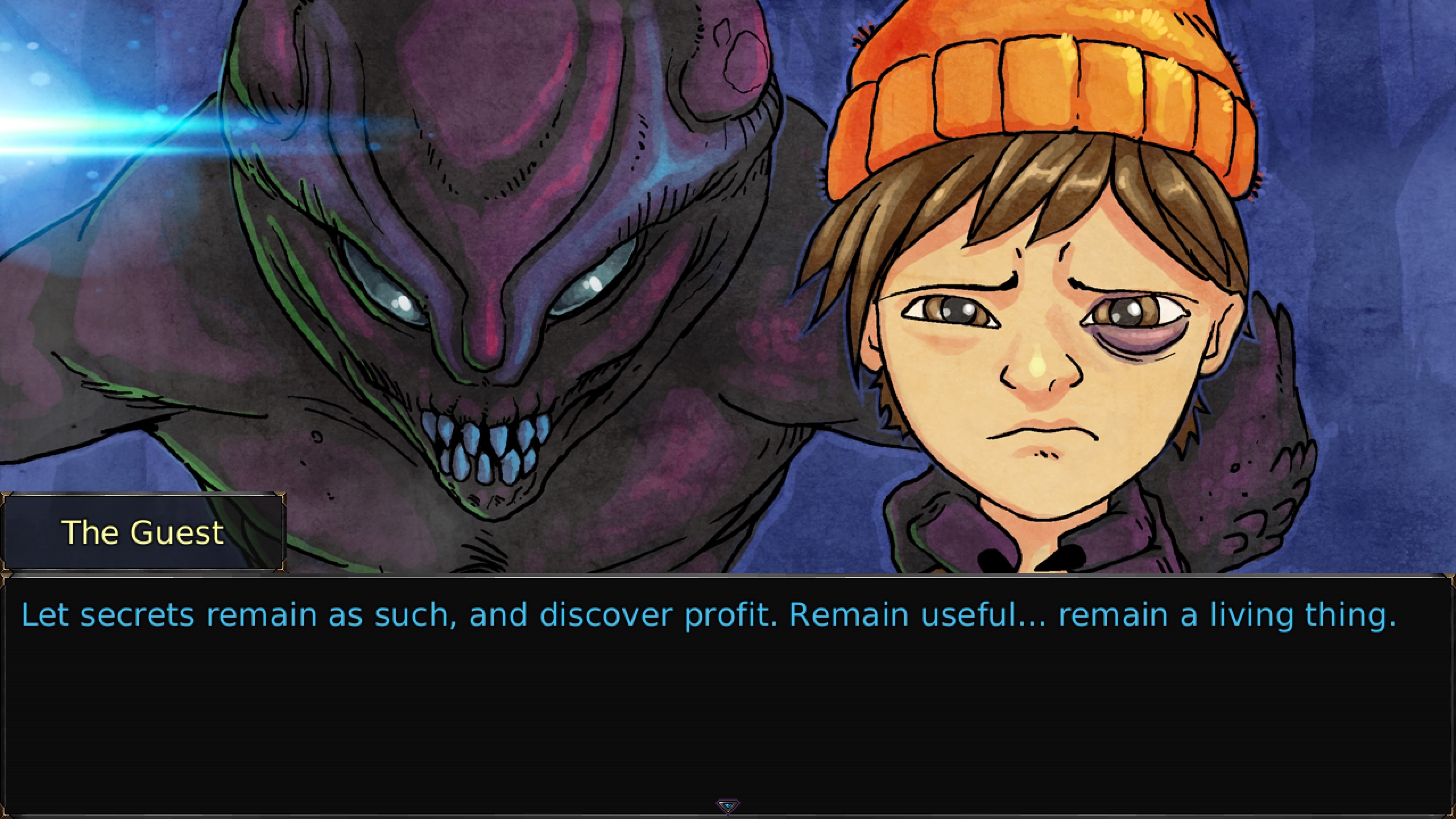 Strong Points: Fluid animations; convincing dialogue and setting
Weak Points: Scrounging for items amounts to pixel hunting; many of the areas repeat in the short experience
Moral Warnings: Plenty of harsh language with nearly every swear in the book; blood and violence, with a gory moment near the end; drug and alcohol usage by NPCs; some risque dialogue leaning towards sexual conduct; burglary

Landis, Oregon is a cold desolate place, and the snowfall further amplifies the effect of loneliness. Evan travels far on foot to reach the town and school. Most of the trees have no leaves, many of the stores in town are closed, and there is barely a person in between. Most of the townsfolk want nothing to do with Evan due to the reputation of his father, who some dubbed “The King of Landis.” Evan can’t even hang out with his best and only friend Dustin outside of school because Dustin’s parents want nothing to do with him. The vacancy of Landis is captured very well in the detailed spritework as the character sprites are small in comparison to the large set pieces and scenery. Some of the sprites move with great fluidity, such as The Guest and its quick and unsettling movements. Some scenes are portrayed in 2D artwork and although a little inconsistent, captures the bleak setting with its rough edges.

The Prince of Landis plays like most RPGmaker games and is viewed in the same perspective. Evan moves around the grid-like environment, interacting with people and objects. The sense of movement does clash with the visuals as Evan traverses on a grid, but the map design fails to portray it as such leading to clunky movement. Many places Evan has commentary on, while most of the people treat him with disdain. When Evan is made to confront himself, such as looking at a mirror, he has choice words such as “pathetic” to describe himself. The story takes place sometime in the 1980s and has a rather believable dialogue for the time, with understandable reasons why the people of Landis act the way they do. The few willing to have a conversation with Evan typically talk about their woes or are just looking to vent about their rather hopeless situation. Even Evan's life seems predetermined as most expect him to work in the factory after he completes school. The Guest has the strangest dialogue as his grasp of English is limited, and speaks in a matter of fact, cruel tone about life in general.

As Evan collects goods for The Guest, they are stored in the inventory of the bottom left of the user interface. Like many adventure games, items can be used to interact with the environment and access previously closed-off areas. With the graphics being so detailed, items tend to blend in and can be very hard to spot. With some items also not spawning after certain event flags, this can lead to pixel hunting across the dozen or so screens. In your hour and a half adventure, you’ll be walking through the same scenery often. 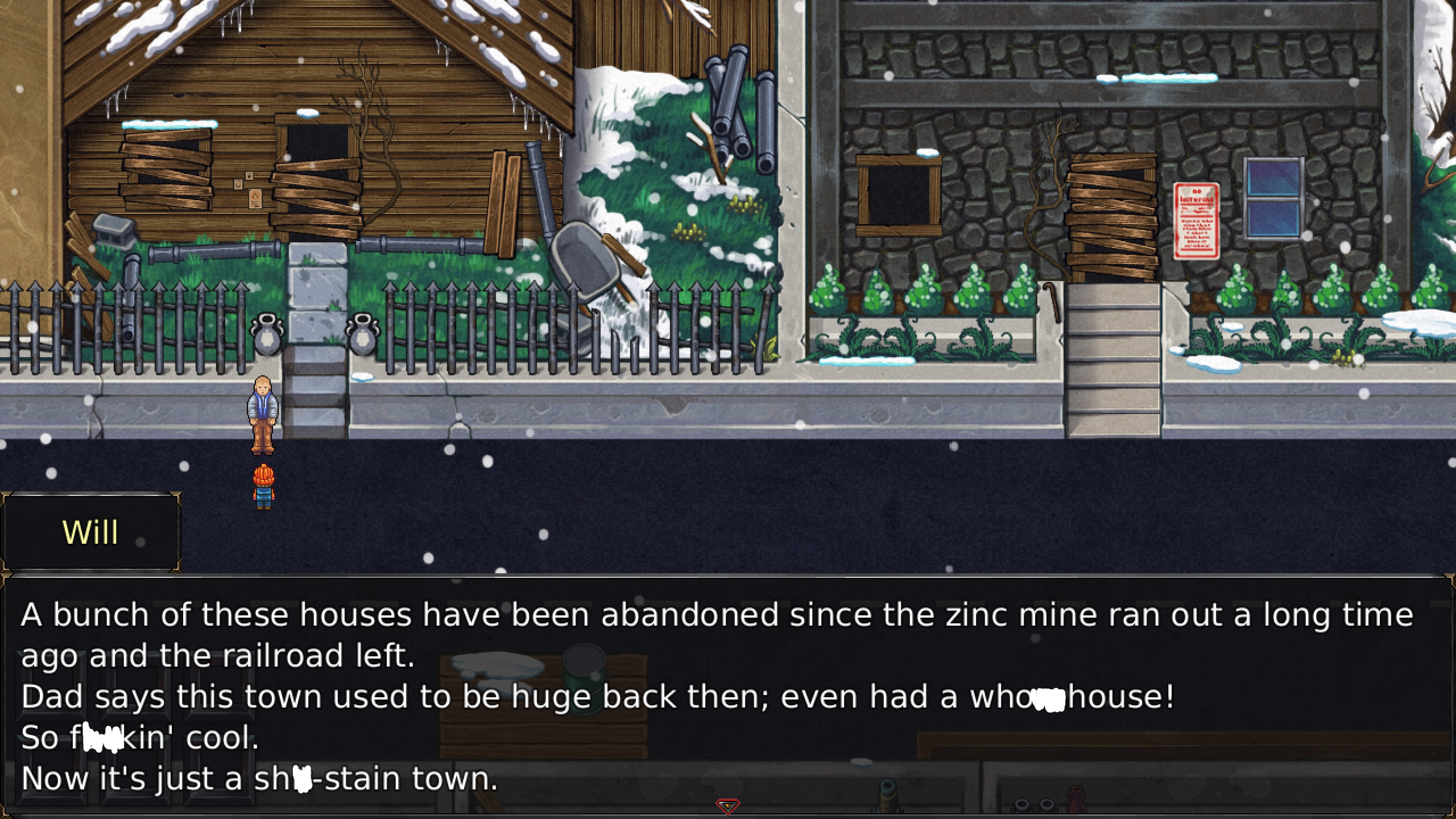 Music is few and far between, as to capture the sense of being alone in the world. Whenever scenes with The Guest appears, a menancing, boorish tone accompanies him. Sound effects are mostly a popping sound whenever dialogue appears, or when transitioning from screens such as the door closing when going into a house. Usually, a lack of music would be a negative for many games, but it works for what The Prince of Landis is trying to do.

Now given how the 80s were and how depressing the setting is, there are a lot of moral warnings to be aware of. Nearly every third line of dialogue has some usage of the F-word in it, with some other words being “a**hole” “sh*t”, “b*tch”, “f*gg*t”,“d*ck”, and God’s name used in vain. In one section, Evan can overhear some students talking about how they went to Europe to have copious amounts of sex with women. In terms of violence, Evan gets beat up by Jason in a few scenes, portraying Evan with a black eye and blood strewing from his face. In the very first scene, a dead deer can be seen in the snow, and Evan comes across a dead rabbit. Near the end, a violent and gory scene can happen with The Guest, as he tears his victim apart with blood and guts shown everywhere. Evan might be a good kid overall, but he does have to resort to things such as stealing as well as breaking & entering to appease The Guest’s demands. He can also take the easier method of completing these requests such as feeding his neighbor’s chicken to The Guest, or stealing Dustin’s penny collection for copper. Drugs and alcohol are also present as Evan’s father is almost always drinking, two individuals in a back alleyway can be seen smoking or consuming cocaine, and a scene with Jason smoking what I believe to be a joint.

While not a long adventure, The Prince of Landis does show the downsides of living in a dying town. Evan’s struggles can be very relatable to many, and his encounters with The Guest feel like a distorted encounter with E.T. An earlier review I played in the same genre shares similar themes about a coming-of-age story about making the most of your day. Whereas that game Sumire portrays this moral lesson in a very optimistic way in that everything will work out as long as you try—The Prince of Landis has a much more pessimistic look about seizing one’s day. Life is unfair, the strong tower over the weak, and no one except for yourself is going to help out. If you are weak, you must use cunning and manipulation to defeat the strong. Even if your situation seems awful, you are still the captain of your ship. Overall, it’s a simple adventure game with a simple message for someone looking to pass the time, and for those who can deal with a script representing a time long ago.