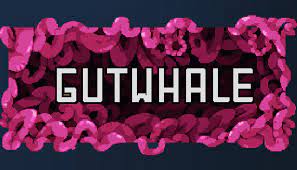 Thank you Ratalaika Games S.L. for providing us with a review code!

Whales—gotta love these colossal creatures. There’s just so big and fascinating. It makes sense why there is a ton of media that puts a focus on them. Gutwhale by Stuffed Wombat takes place in the entrails of the massive cetacea—A humpback whale I believe it to be. It is very similar to the Monstro segment of Disney’s Pinocchio, just with more blood and guts.

An old farmer-looking guy gets swallowed whole by a whale, and must get out. The only thing he is armed with is a rifle that holds exactly one bullet. Every floor has four levels where the goal is to clear all enemies on the screen. You’ll shoot at weird jellyfish, frogs, giant parasites, and strange undesirable creatures. Most enemies take one hit to kill, but so do you. It’s a game of cat and mouse where you must run and jump with good accuracy, using the one bullet wisely to take out your foes. The bullet doesn’t disappear when you shoot it, however, as you have a chance to collect it as it bounces around the environment.

Controls are simple and solid. Movement is with the control stick or D-Pad, jumping is with cross and shooting is with the R1 button. If you hold the jump button, our farmer guy takes a page from Luigi in his Super Mario Bros. 2 (USA) appearances and flutters his legs, slowing his descent. This also lets the farmer shoot downward so he can hit enemies directly below. 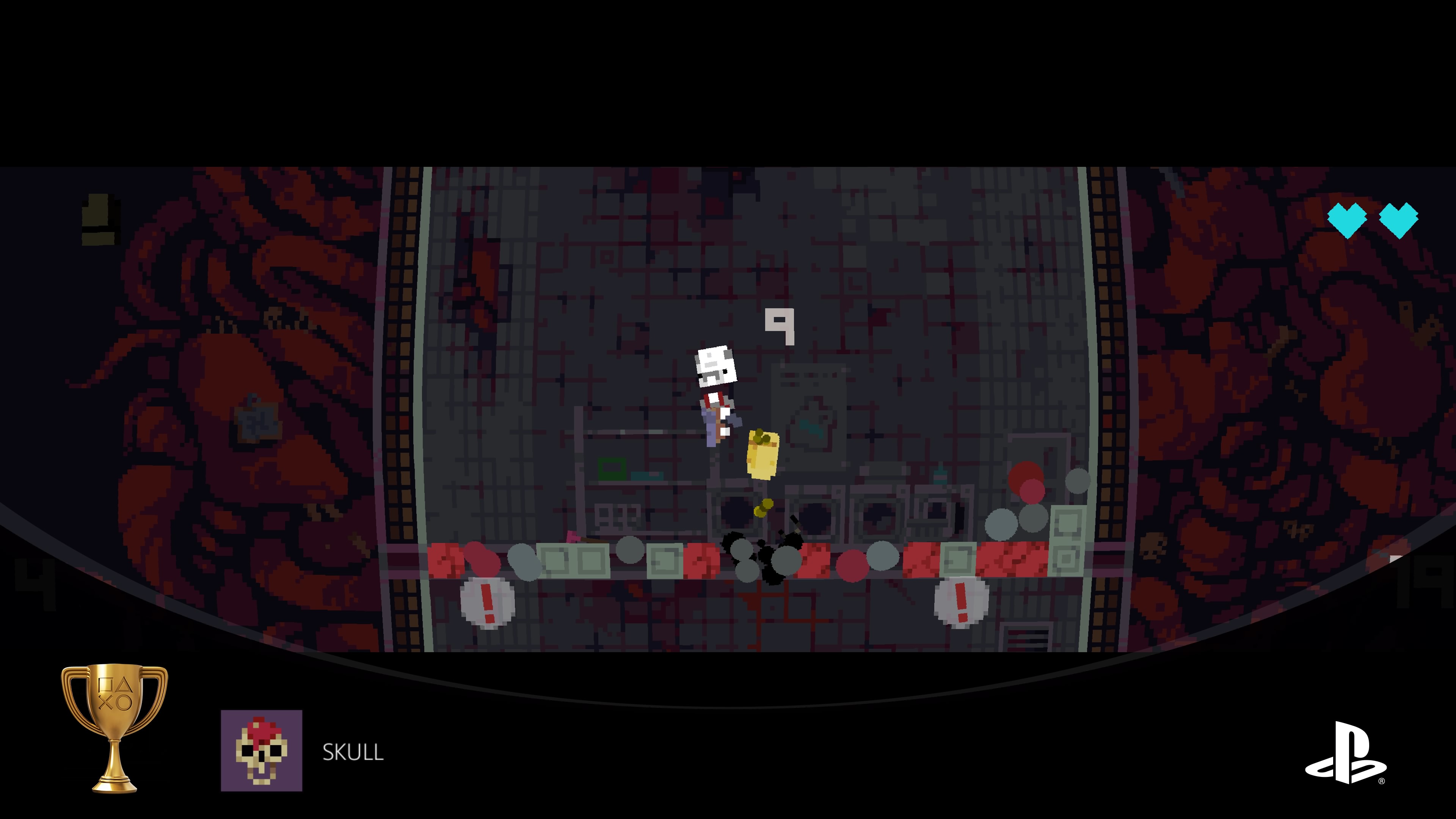 Most enemies are very aggressive as they target you the moment they can. If an enemy kills you, you drop your bullet and can respawn as long as you have hearts available. Dying balances risk and reward as you have more bullets accessible to you, but you now have fewer chances to reach the bottom. Gutwhale also has a combo mechanic as if you catch your bullet before it lands, you gain more points. Points can be used at the end of each floor to obtain more hearts, bullets, special hats that grant abilities, or multiply your current point value by 1.5x or 2x. As for how it’s a roguelite, the levels and enemies have different placements for each playthrough, and that permadeath exists.

In terms of sprites, the characters and enemies are pretty simple, using 8 and 16-bits. The impressive part is the background, whether it is the rooms where the farmer falls down or the whale guts that are all over. As grotesque as the innards of any living being are, they are done well. When you beat the game, you get to see how the whale itself looks, and there was clearly a lot of effort that went into the design of it. There are options to turn the screen brightness up from a dull grey-ish color to a bright almost neon-like aesthetic, as well as the option to make the screen “bulge out”, giving it a CRT-like look.

Sound direction is kinda strange but makes sense as you’re inside a whale and it does ramp up in intensity the further down you get. In the options, there is a choice to change the SFX to “sound effect” where a stoic voice says “sound effect” for every sound effect that happens. The music can also be changed to a rather silly soundtrack called “is this music?” with the creator whistling for music and doing other oddities. 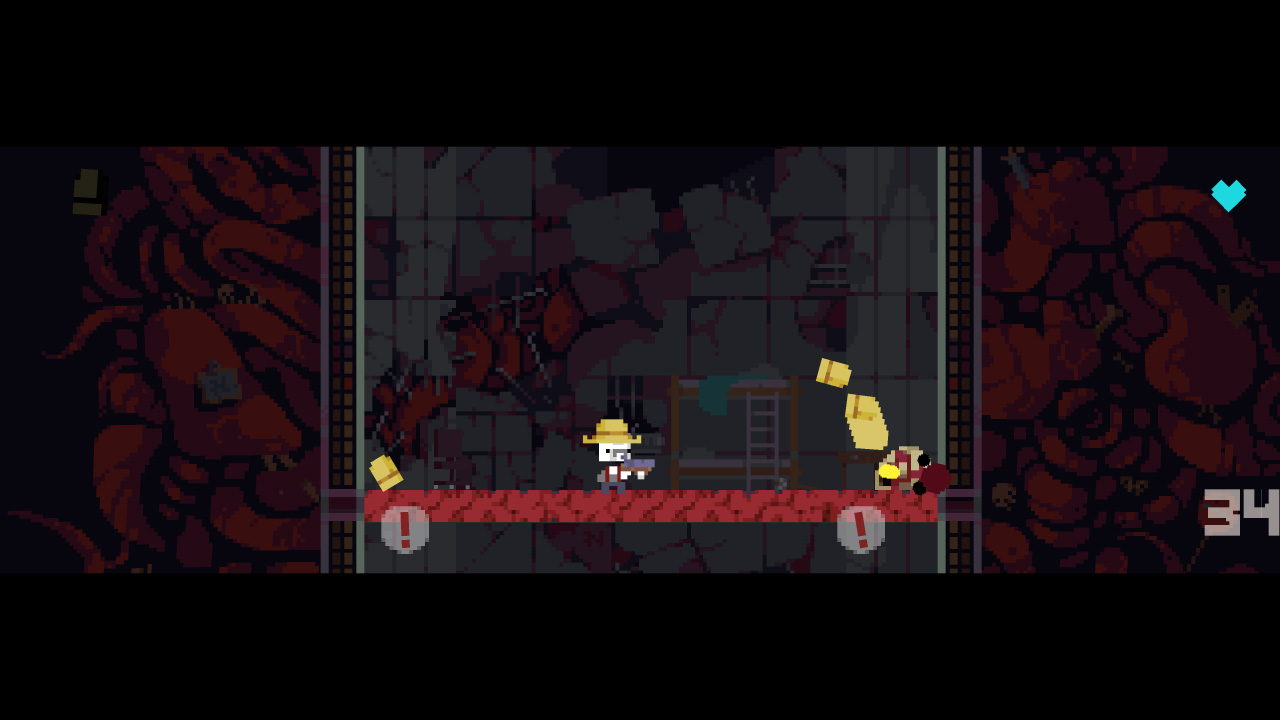 Moral warnings are very few. There is violence with the farmer shooting enemies with his gun, or being reduced to a skull when killed. Some enemies bleed a bit when killed as it appears as a round pixel. For creatures, there is a floating skull, some weird X-cross thing, and a triangle-shaped creature.

Gutwhale is a very, very short game. The three levels only take about 1-3 minutes to beat, but you will happen to die a lot before the credits roll. Despite how simple the gameplay is, there’s something engaging about it that makes you want to keep going until you beat it. Probably because of how quick everything is. I do wish there was more to it, but I understand why it isn’t. And it doesn’t exactly end either when you reach the bottom—remember, the goal is to get out. Getting all the achievements will probably take anywhere between 1 and 3 hours. For a project that only took 5 weeks to make, it’s a commendable effort. And how do I know this? That’s because the “is this music?” setting also doubles as developer commentary about how the game came to be, the woes of an indie developer, and finding out what you want out of your life. It sure puts Gutwhale in a different perspective after listening to it.