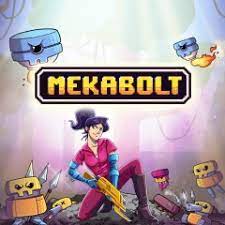 Mekabolt+ is the next-gen console upgrade to Mekabolt that was originally released on Windows, PS4, Xbox One, and Switch in 2019. The entry on the PS5 and Xbox Series platforms introduces a new character that has his individual 24 levels.

The story in Mekabolt is very light. You’re a female theme park technician. The batteries that run the theme park have gone missing and you are tasked by your boss to retrieve the batteries. Mekabolt is a 2D pixel puzzle-platformer where you run around 96 levels collecting batteries. Every level is fast-paced and pretty condensed so while the 96 levels sound like a lot, most levels will take less than 20 seconds to beat. 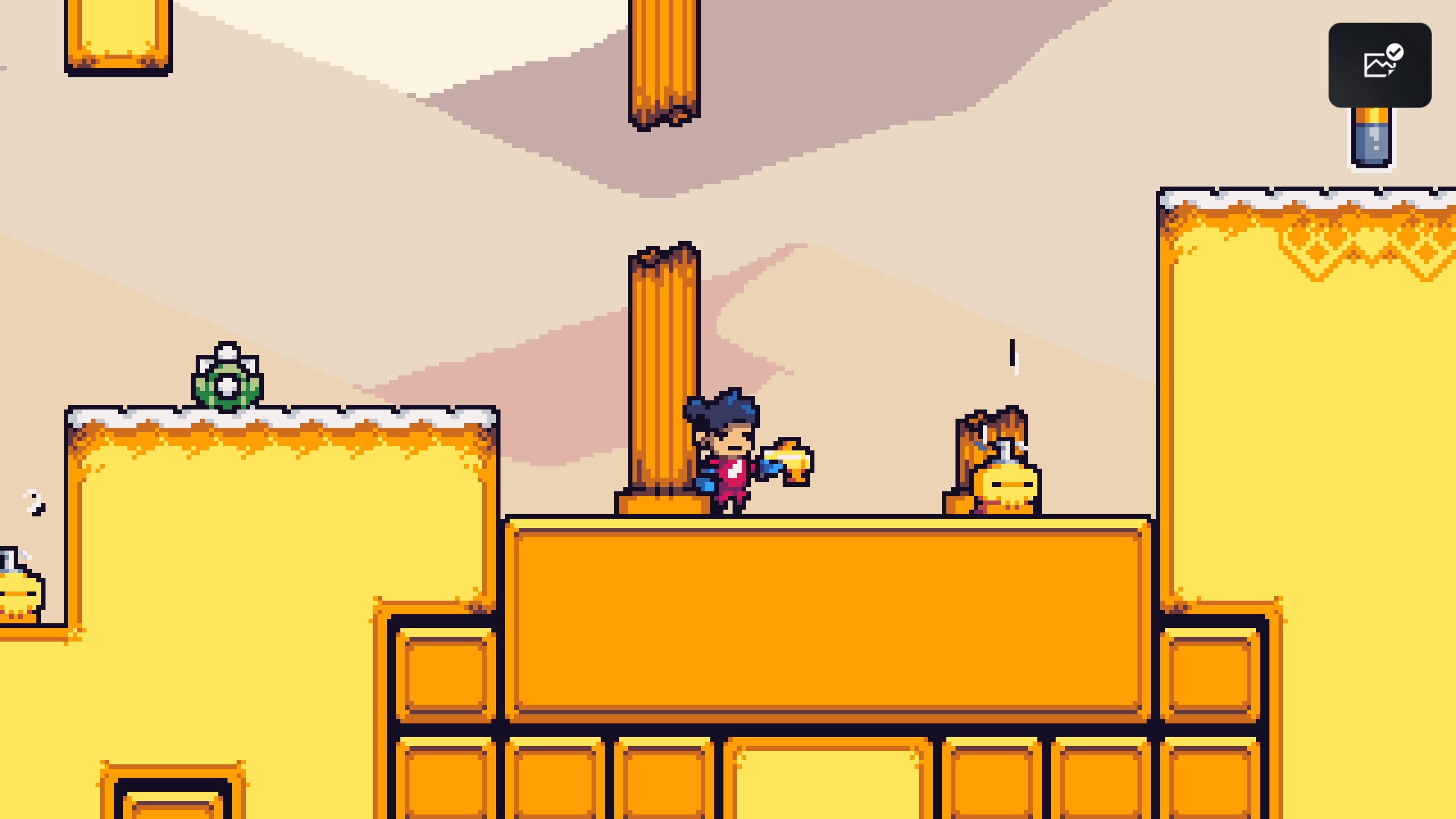 Controls are very simple with movement using the D-pad, cross to jump, and either the other face buttons or triggers to use your gun. Both playable characters have a predetermined height to their jump so there is no instance of “shorthopping” like in other platformers. Overall, they are responsive and work as intended.

The female technician has this special gun called the Mekabolt that shoots these yellow spheres that can enable and disable the various robots that walk and float around the theme park. After disabling them, most of them can be pushed around to reach higher places while some have certain abilities like shooting fireballs or spears. Using the fireballs to your advantage can burn bush areas allowing you further access. 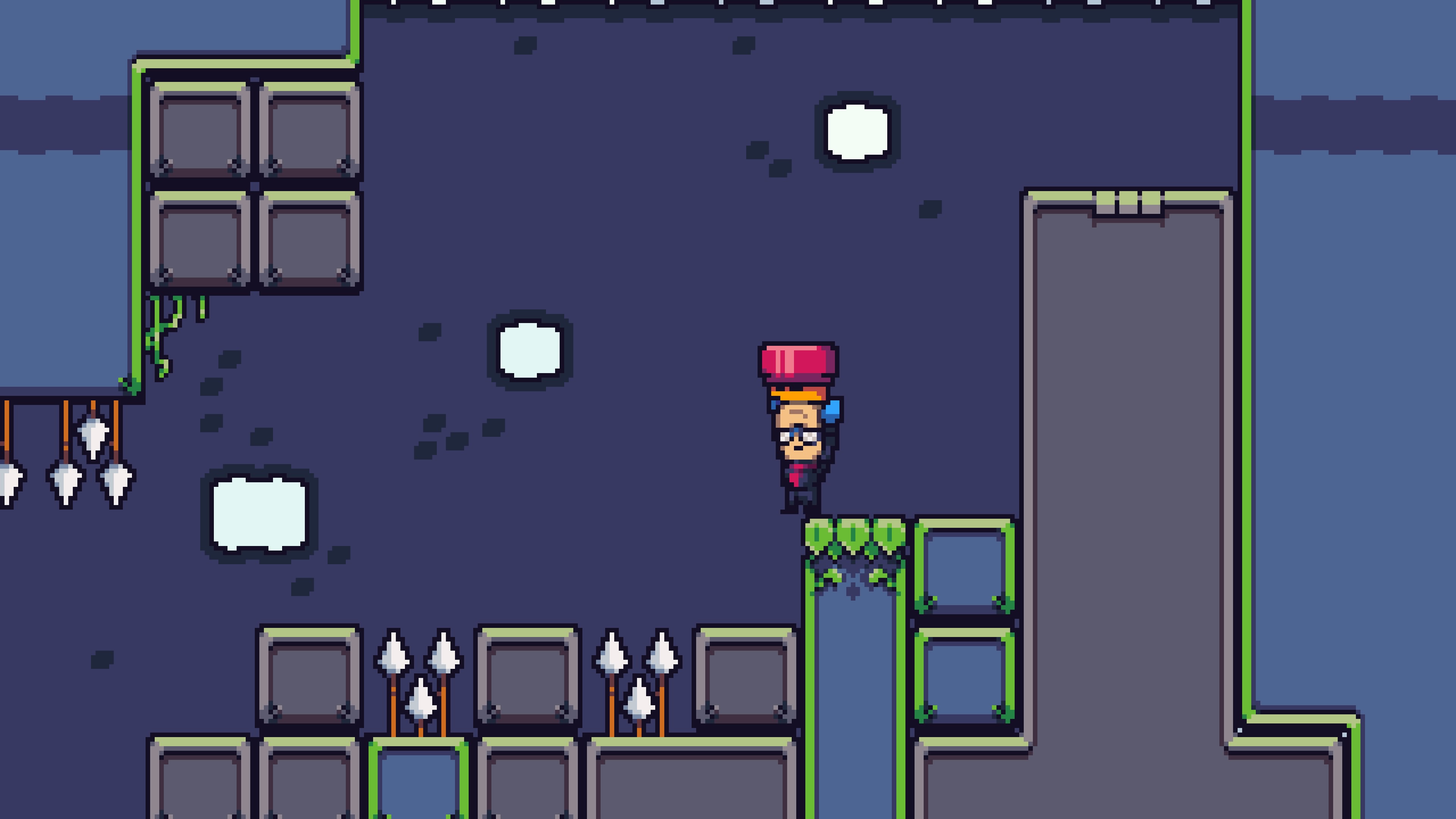 Developer Sompx plays around with a lot of elements with each world having a specific gimmick. The first world is a forest/field area. the second world is a desert theme with cacti and disappearing platforms. The third world is a cave theme with lava and stalactites that act as extra platforming. And the fourth world has an industrial theme with lasers, switch doors, and teleporting robots. My favorite world is the fourth one because the gimmicks are very enjoyable (even though I found it to be the easiest world) and my least favorite is the caves as the stalactite gimmick is annoying. All the stalactites look the same and you’ll never know which one falls on you or not without taking a few deaths here and there.

Mekabolt+’s 24 other levels have you play as the boss of the theme park. Whereas the girl had the Mekabolt weapon, he does something else entirely different. He can pick up and drop robots, opening up a whole new layer and strategy. A good chunk of his levels are variations of the 96 original level, but some are exclusive to him. The pace slows down a bit for his sections, but that doesn’t make his sections any less enjoyable.

A player will blast through the 120 levels anywhere between one and two hours. It’s a very short experience. The only moral warning to be mindful of is cartoon fantasy violence. When the technician or boss runs into a moving robot, falls into spikes, or touches a laser, they just poof out of existence. Mekabolt+ is a fine way to spend an afternoon or evening if you enjoy puzzle platformers.