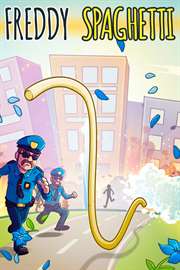 It’s been roughly a month since the next generation of consoles have arrived on store shelves, and as a result, there’s a dearth of games available now on the PlayStation 5 and Xbox Series X. While there’s a steady stream of AAA titles on the way soon, now’s the best time for indies to take hold of the shortage of next gen games to play, and Ratalaika Games has teamed up with Playful Pasta to release Freddy Spaghetti, a fun physics adventure game that’s surprisingly fun for the whole family.

Freddy Spaghetti stars the titular limp noodle as he acclimates to society thanks to an unseen family that’s basically adopted him. In the first of five worlds, you get acclimated to the controls of the game while completing different tasks, from kicking a soccer ball into a goal to doing a doorbell ditch routine as a prank. The main gameplay mechanic is that you’re playing… well, as a spaghetti noodle; as such, you have a different method of moving, since you can bounce on both ends using the L1 and R1 buttons while aiming with the analog stick. There are toggles you can turn on and off where you can see which button will control which side of Freddy; this helps immensely when you zip around the stages and your ends keep switching. 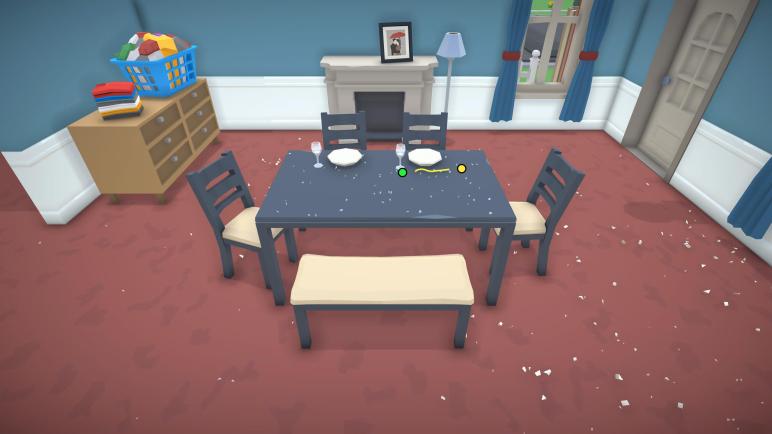 For a gameplay mechanic that relies on unwieldy controls, it works perfectly. It’s a feature, not a bug! Reminiscent of games like I Am Bread, Octodad, or QWOP, part of the fun in Freddy Spaghetti is trying to get the controls to work in your favor and finding a groove once you do so. Even something as simple as entering a door becomes a challenge as you try to manipulate the physics and positioning of Freddy in order to gain enough momentum to advance forward. It’s quite creative to see what you can do with two glorified jump buttons.

After the first world is finished, Freddy unfortunately finds out what happens to spaghetti, and as such goes on a rampage to destroy those that would threaten to eat him. It’s here that the world opens up, and the game feels like a version of Katamari Damacy as you hit fire hydrants and cars around town. Later worlds will feature a futuristic society (with such obstacles as drones with proximity sirens), a western past world, and even an arcade-like virtual world. These worlds are distinct and varied, and feature new ways to maneuver with the jump mechanic given to you. Who knew playing a song on a piano as a piece of spaghetti would be innovative?

While the soundtrack is a run-of-the-mill assortment of tracks that will just play in the background, I must commend the voice work of the narrator, who is the sole voiced character in the game. He does his best impression of the narrator of The Stanley Parable or Thomas Was Alone, and is charming when he’s concerned about the wellbeing of Freddy. He contributes much to the tongue-in-cheek feel of playing as a string of spaghetti, and it made for a pleasant experience. 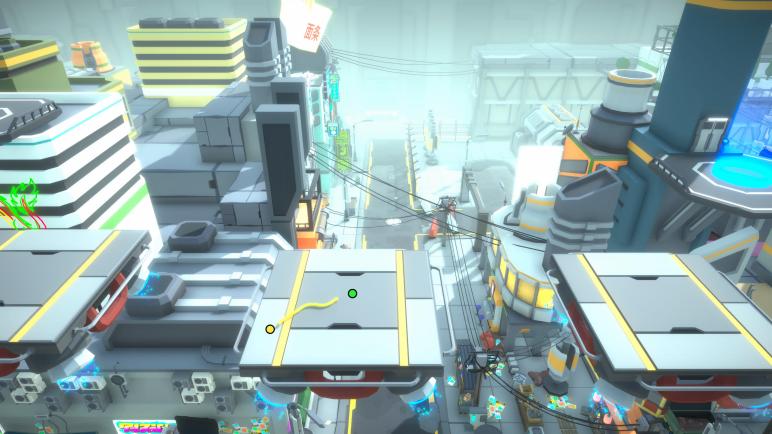 What’s not so much a pleasant experience is the fact that the game only lasts about an hour, even if you’re stuck on one section. The game consists of 50 levels with 10 levels in each world, but unfortunately most of them last less than a minute, and some of them are just “go from point A to point B” without any meaningful obstacles. The mechanic still has some life in it, so even adding another world would not have felt like filler. There isn’t any replay value either, since the game’s platinum trophy can be acquired by just playing the game (and some bonus levels which are just remixed tasks like typing on a keyboard or playing the aforementioned piano again). On the bright side, this might just be your first PlayStation 5 platinum trophy!

Other than the length, the presentation leaves something to be desired too. When you buy a $500 USD console, you’re expecting quality graphics the likes of Spider-Man Miles Morales or even Astro’s Playroom. While the game’s art style isn’t offending to the eyes, it still feels like a PS4 game in terms of looks. It does perform like a PS4 game too, since it inexplicably suffers from framerate drops after the first world, and even crashed a couple of times during play. What makes this feel more like a rushed port is that the DualSense controller is not utilized at any point in the game, which is a shame because Astro’s Playroom is a short game that uses everything the DualSense has to offer, for the low price of free. That said, spending $4.99 on this game isn’t such a bad deal, especially with how innovative the main game is.

In terms of moral content, Freddy Spaghetti is a fun title with only a small amount of objectionable content. There is some violence that occurs, especially during the second world, where you’re hitting cars and fire hydrants. In the second world, Freddy is also rebelling against society for a little while, but he is easily won over by the end of it and will go back to being a good guy. You can be caught by police officers or robots, which will end up giving you a GTA-like parody game over screen where you’re busted (or overcooked, or the like). Nothing explicit happens when something gets hit; it’s more like rag doll physics than anything super violent.

You might be waiting for next year’s games to come out on the PlayStation 5, so why not take a breather and play Freddy Spaghetti? It’s a fun little time waster that’ll have you chuckling for an hour.