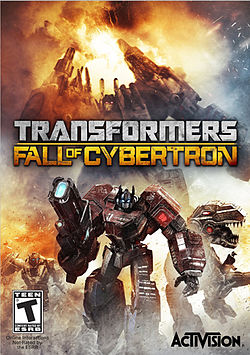 Transformers: Fall of Cybertron is the follow-up to High Moon Studios’ 2010 hit Transformers: War for Cybertron.  If you’re familiar with the first game, there’s a lot you’ll recognize in the sequel.

The story picks up shortly after War for Cybertron with the Autobots resigned to leave their home world to the Decepticons and they’ve taken to space in the Ark.  The action starts as the Decepticons attack our fleeing heroes in a ship of their own.  In a bit of Tarantino-esque storytelling, this opening actually takes place late in the game, and at the conclusion of this Bumblebee-centric level you’re sent back to the actual beginning of the story and handed the controls of Optimus Prime.

The controls of the two games have not changed and you’ll be controlling your Transformer from a third-person perspective in either robot or vehicle mode.  Utilizing cover is an important tactic as wading into combat guns blazing is a recipe for disaster.  You will die often if this is your gameplay style.

Your vehicle mode is both a means of rapid transit and tactical retreat.  The game encourages you to switch to vehicle mode if you find yourself getting piled on and it will save your tailpipe.  You’ll have access to a different weapon while in this mode and strafing and darting in and out of thick masses of enemies was a breeze.  The controls were fluid, if a touch sensitive.  Still, it worked well and looked great. 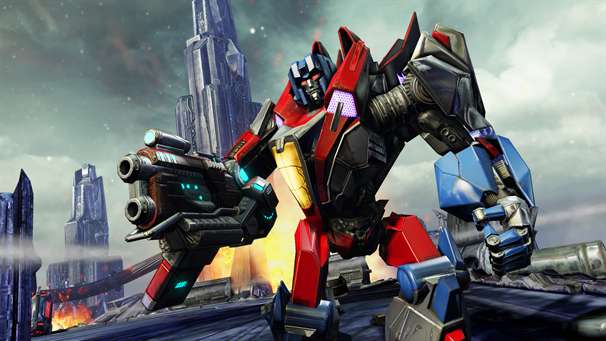 Strong Points: Fast and enjoyable combat.  A story that does more than check off boxes.
Weak Points: Multiplayer, however, lives to check boxes.
Moral Warnings: Half of the gameplay you're in the shoes of the bad guys.  The story can get dark in places.

In addition to land-based combat, air combat makes a return and it’s just as fun as anything on terra firma.  Arial combat gets introduced in the first Decepticon level but it reappears later for the Autobots.  You’ll zip through sections of tunnels and tight corridors designed, it feels, to simply let you enjoy flight at breakneck speed, while most combat involves you attacking land-based targets and having to avoid anti-aircraft fire.  Like in the land-based levels, it seems that using a combination of robot and vehicle mode is encouraged.  There were many times it was just simply quicker to fly in, pop into robot mode, take out pesky Autobot scum on the ground, then switch back into vehicle mode to repeat the process elsewhere.  It felt like magic.

Many of the Transformers you’ll control will have special abilities that the level is designed around.  Cliffjumper is an infiltrator, so he gets a cloaking ability, Jazz is more of an acrobat so he gets a grappling hook he’ll use to pull obstacles down or reach distant platforms.  Of course, I can’t leave out the Combaticons' ability to combine into the massive Bruticus.  Combining was something noticeably absent from [i]War for Cybertron[/i] and it makes a glorious appearance here for specifically designed sections.

If I have to make a complaint at this point, it would have to be directed toward the end of Cliffjumper’s level.  Cliffjumper, despite his bravado, is a stealth-based character.  His level is designed around you not being noticed, avoiding fights, and getting your objective completed without alerting enemies.  But the climax of his section forces you into a playing style that felt like an abrupt departure from everything the game taught me about playing Cliffjumper to this point.  It was both disappointing and a chore.  Fortunately, this is the lone outlier, and the game builds upon teaching you how to play, and applying those lessons, well.  Failure wasn't frustrating or out of nowhere; I knew each time what had happened and why.

Now I have to talk about Grimlock.  He’s on the cover of the box and everyone loves him and the Dinobots; everyone but me.  Listen, I didn’t hate them, but I was never really into them.  That said, High Moon Studios finally made the origin of the Dinobots make sense.  I can’t express how effective the genesis story is because of Grimlock.  While the other Dinobots take what has happened to them fairly positively, when you realize how much more was taken from Grimlock your heart will break.  For the first time ever I cared about that character.  It's clever, touching, and I hope it's adapted in other franchise media. 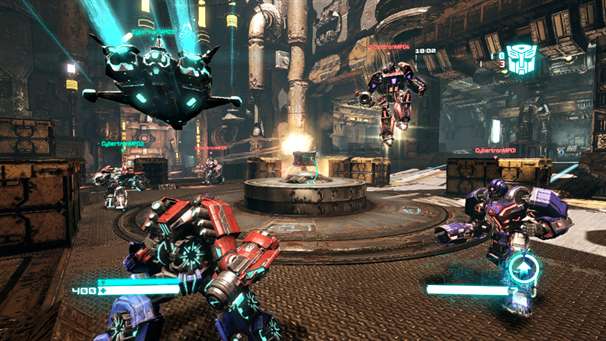 As far as gameplay is concerned, Grimlock controls differently from any other Transformer.  He only uses melee attacks and his massive size makes him unable to interface with Teletran 1 – the computer terminal you access throughout the game to choose and upgrade weapons.  Grimlock hacks-and-slashes through enemies, while his T-Rex mode is only accessible when his rage meter is filled.  It’s very appropriate.  In T-Rex mode his primary weapons are his tail attack and fire breath, and with them he becomes an unstoppable force of nature.  I cannot speak highly enough of everything that involves him.

The game concludes by incorporating most every element you've spent time mastering in the previous levels: Ground combat, flight, and combiner, you’ll use it all in the frenetic climax of the Autobot and Decepticon battle.

Multiplayer is pretty standard fare.  You choose your mode (Deathmatch, Capture The Flag...), then choose one of four classes (Scientist, Infiltrator, Destroyer and Titan) and have at it. Your Transformer can be customized with experience points earned while playing, and any XP accumulated during the round is lost if you drop.  While you still have access to your vehicle mode you do not have its weapon any longer, so it's only really useful for getting around the map.  I usually didn't bother and simply ran to my destination.

There's also an "Escalation" mode, witch is simply the horde mode we've seen in other games.  You choose your Transformer again and work in a team to fend off ever more challenging waves of enemies.  As you progress more areas of the map are exposed, allowing you access to additional upgrades. 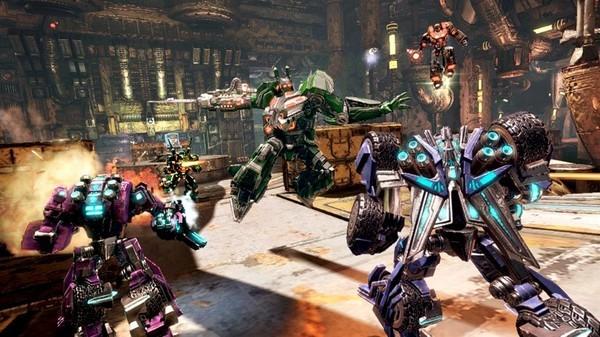 Of the two halves of the game, the multiplayer aspect did the least for me.  It wasn't bad, but it was all stuff we've seen before.  I wish High Moon Studios would have capitalized on the brand and found a way to introduce modes we've never seen, that could only be done with a Transformers game.

Graphically the game is pretty for what it is.  You’re not looking at jungle vistas or fantastical castles, but metallic war-torn char.  Everything looks appropriately abused with just a hint of history that makes the setting breathe a little.  Texture popping was minimal and it wasn't enough to distract from the experience.  Complimenting the on-screen mayhem, the music is appropriately bombastic and epic.  It fits well and is good enough on its own that I keep checking to see if the soundtrack comes up for sale.  Here’s hoping it does.