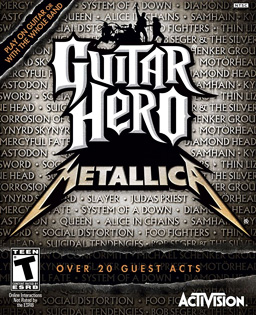 Do you ever buy games and forgot about them or just haven’t gotten around to playing them? That’s the story of this game for me.   I’m a sucker for game sales and I remember picking up Guitar Hero: Metallica on sale but not playing it since I wanted to complete Rock Band: Beatles first.  We did beat it and got tired of the genre and took a break from it.  Another year or so passed and this game sat waiting in its wrapper to be opened and enjoyed.    Alas, we opened it and were in for a treat!

Metallica is one of the top heavy-metal bands out there and they are extremely talented. Many may not like their style, but their fans will agree that this title represents them nicely.  I’ll be dating myself here, but I owned the Master of Puppets cassette when I was in grade school.  When The Black Album came out, many of those songs were radio hits and rightfully so.

Not surprisingly, many of The Black Album hits are playable in the game.  Other notable entries include Master of Puppets, Battery, One, Fade to Black, Creeping Death, King Nothing, Orion, The Memory Remains, No Leaf Clover, Welcome Home (Sanitarium) and The Thing That Should Not Be.  There are a few tracks from other bands including Turn the Page (Bob Seger), Toxicity (System of a Down), Stone Cold Crazy (Queen), Stacked Actors (Foo Fighters) and No Excuses (Alice in Chains).   If you don’t like heavy rock, this isn’t a game for you. 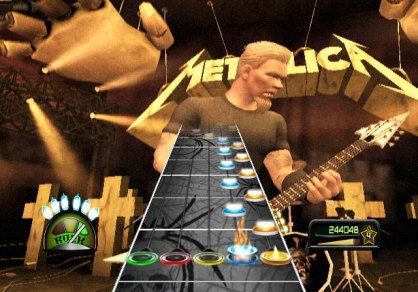 Strong Points: Great songs from Metallica
Weak Points: Not much DLC other than Death Magnetic
Moral Warnings: Many songs have dark themes, some have swearing

The basic game play goes as follows: you have different colored fret bars on the guitar and when you see a colored note line up on the bottom you have to strum and press the corresponding colored fret bar. It takes some coordination and getting used to, but it’s pretty easy to pick up. There are three tutorials that will show you the basics: how to gain and use star power, and advanced techniques. I highly recommend watching them if you’re new to this game.  Veterans will be challenged by the new Expert + difficulty level.  There’s support for drums (Rock Band drums will work) and vocals too.

Guitar Hero: Metallica has the same look and feel as the previous Guitar Hero games. Some of the Battle mode moves have song inspired names such as Fade to Black (turns your opponents notes darker and darker), Trapped Under Ice (freezes the whammy bar) and Ride the Lightning (gives your opponent an amplified shock). All of the stock Guitar Hero band members are present but you can unlock more as you progress in your career.

The Metallica band members look great and their animations are spot on as well.  You can unlock a game development video of the band playing Master of Puppets all wired up to capture their movements.  (Hence the accuracy!)  Other videos include official bootleg concert performances.  The quality isn’t that great, but it’s still nice that they bundled in those extras. The song tracks on the other hand, sound fantastic!  This is a music game after all. 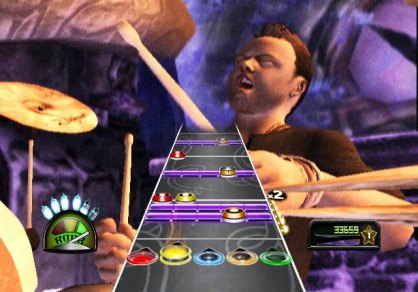 Many of the songs have dark themes that sing about death, suicide, insanity, violence, and evil in general.  There is also some unwholesome language including words like hell, b**ch, and d**n.  One of the worst songs is Am I Evil by Diamond Head.  Fortunately, this game offers an option to view the lyrics so you can check a song out before playing it.  Needless to say, this isn’t a game to be played in front of young kids.

If you’re a fan of Metallica or Heavy metal, this game won’t disappoint.  There are forty nine songs in total of which thirty nine of them are exportable to other Guitar Hero games.  The Death Magnetic DLC is available but there’s not much else available for it.  If you’re looking for a game the whole family can enjoy, you’ll have to continue your search.