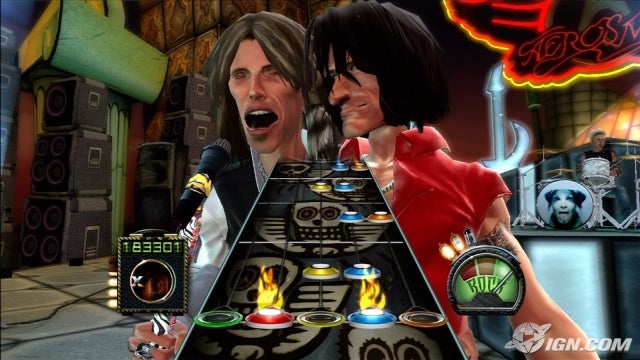 The best way I can describe Guitar Hero: Aerosmith is as an interactive rockumentary. You play through significant places in their career and as you progress to each venue, you get to watch videos of the band members explaining what the venue meant to them as a band. There are six venues and a boss battle with Joe Perry. Out of all of the Guitar Hero titles, this one has the fewest songs and no downloadable content. There is, however, online play.

In this game you play through the history of Aerosmith from playing in a high school gym to the Super Bowl, to getting inducted into the Hall of Fame. You start each venue playing as a cover band, and then you play a couple of songs as Aerosmith with the option of an encore.

This game is the most fun when using the guitar controllers; you can buy this game with or without the controllers. The basic game play goes as follows: you have different colored fret bars on the guitar and when you see a colored note line up on the bottom you have to strum and press the corresponding colored fret bar. It takes some coordination and getting used to, but it’s pretty easy to pick up. There are three tutorials that will show you the basics: how to gain and use star power, and advance techniques. I highly recommend watching them if you’re new to this game. As you advance in the career mode, it will unlock more songs for quick play.

Guitar Hero: Aerosmith has the same look and feel as Guitar Hero 3. All of the same Guitar Hero band members are there including the big mouthed singer. You can unlock Aerosmith members as you progress through the career mode. The Aerosmith band members look great and the singing animations for Steven Tyler are quite good. The venues and stages are quite colorful and are very detailed too.

As I mentioned earlier, the song list is rather sparse in this game. There are roughly forty songs, but thirty one of them are available in the career mode. Some of the Aerosmith songs you’ll be playing include Sweet Emotion, Love in an elevator, Dream On, Rag doll, Walk This Way, and more. I was surprised that Janie’s got a gun and Dude looks like a lady didn’t make the cut, and many of their other greatest hits are not present. There are also songs from Lenny Kravits, Stone Temple Pilots, The Black Crowes, The Cult, The Clash, Run DMC and Joan Jett and the Blackhearts.

There is multiplayer game play available, but you may have some difficulty connecting on the servers or finding players. I once got a server was full message. You can create your own match and when you’re looking to join a game you can choose what mode and location to include, or just leave everything set to “any”. There are Pro Face-Off, Face-Off, Battle, and Co-Op modes available. You can play at various venues and choose the winning number of songs to be the best of 1, 3, 5, or 7.

When it comes to appropriateness, many of Aerosmith’s songs have sexual themes. Some of the songs that come to mind are Ragdoll, Love in an Elevator and Train kept a-rollin. There are three female guitarists and only one of them is decently dressed. The other two are showing off their bra and one of them isn’t even wearing a shirt to cover her bra even a little bit! There is some language as well in the video footage. Some but not all of the swear words are bleeped out. Since this game was similar in style to Guitar Hero 3, I was happy see the occult symbols were still left out (but excessive swearing and repeated sexual themes were left in).

Out of all of the Guitar Hero games I have played, this one is my least favorite. This is mostly because of the short song list and lack of downloadable content. It’s still fun because of the uniqueness and the personal touch from Aerosmith. The bundled Aerosmith guitar looks kind of snazzy but I’m still glad that I paid as little as possible for my used copy of the game.