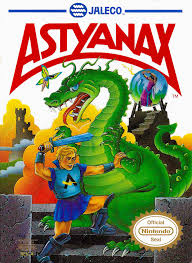 "Astyanax.... Astyanax.... I'm waiting..." the voice of a girl in your dreams continues haunting you. All you know is you're running late for Biology class and you've got no time for strange fairy tales. Or do you?

One day, Astyanax is transported into the world of Remlia by Cutie, a fairy from this world who explains that the girl in Astyanax's dreams is Princess Rosebud of Remlia. She is being held captive by the evil wizard Blackhorn and Astyanax is the only person who can save her. Astyanax protests, but agrees to do the quest when he realizes only Rosebud has the magic to send him home. Cutie will remain your companion throughout most of the game, often helping you and refilling your magic meter or helping you change your weapon, known as Bash.

Astyanax is a side-scrolling game available in both an arcade and an NES version. I am reviewing the NES version here as that is the main one I have played and am familiar with. Many years ago, as a 4 year old, I checked this out from my local library and could never make it past the second level. For many years, I forgot about it, but the memories of colorful levels and a truly amazing soundtrack remained in my subconscious. 20 years later, I finally found the game and was able to complete it. Since then, I've repeatedly replayed it. For an 8-bit game, this has an amazing storyline and some amazing plot twists and turns. Spoilers marked throughout. 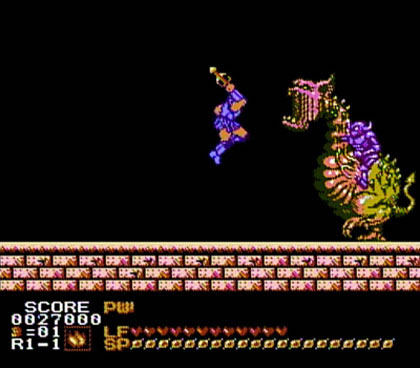 This game is hard. Back in the day, games were made as hard as possible, and Astyanax does not have save points, as games back then often did not, but Astyanax really goes for 'screw you' in terms of difficulty. You can easily fall off into pits and many bosses require you to make choices about either using your magic and STILL not killing them or hacking and slashing and hoping you have enough health to make it. My first time playing it as a 4 year old, I could not get past Medusa, the boss of the second round, and even as an adult, many bosses stumped me, or frustrated me as I had to fight them after an already difficult miniboss. One level is particularly dangerous, (about halfway through the game) and this isn't even the final level. After this, the boss rush on the final level doesn't seem too bad.

After each level, or round as the game refers to it, you are treated to a cutscene that further explains the storyline. You can skip these if you wish, but I don't recommend it as doing so will rob you of an amazing storyline and interesting perspective. You are either shown the story from the perspective of the villains as they spy on Astyanax and Cutie, or Cutie and Astyanax as they make their way through the world of Remlia. My favorite of these is the one halfway through the game where Blackhorn and Thorndog, his sidekick, are spying on Cutie and Astyanax and taunt Rosebud that her friends are 'doomed.' 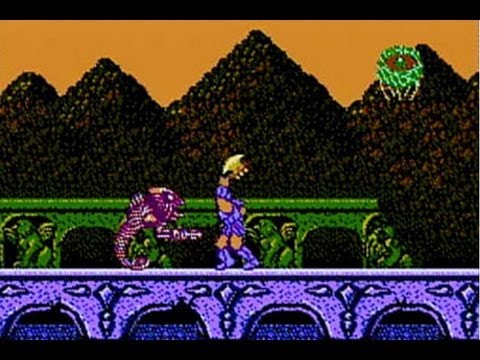 The graphics are what you would expect from an 8-bit game- don't expect anything like the cutscenes from later Final Fantasy games or Call of Duty graphics here. But they are colorful and entertaining, which is probably why this game made such an imprint in my mind even if I didn't finish it as a kid. The soundtrack is amazing. The opening theme, title screen, rounds 1, 2, and 5 are my favorites. The ending theme makes me cry especially as this is the scene where everything comes together, and unlike most NES games that just had a 'THE END', the ending here is meaningful and rewarding to the player. The soundtrack seems to be somewhat inspired by ancient Greece or Rome, which is appropriate as the game appears to be largely based on Greek mythology. I will let the tunes speak for themselves rather than defining it by placing

How about moral warnings? That is where I have some concerns. Many female enemies are barely clothed, and both Cutie and Rosebud show either stomach or cleavage. Medusa, the previously mentioned boss, is completely naked. The violence is no different from any other NES hack and slash. There's no blood though, and the enemies just disappear into nothingness. Thorndog is quite frightening; I would not give this to a young child at all. (assuming they can even get to the scenes where he is seen given the game's difficulty.) As with any fantasy game, there is magic, used by both sides, but it is fantasy magic and not occultic. The borderline concern I have is the spell 'bind' as this actually freezes your enemies on the screen (or you, if it is used against you by a boss). There is no swearing though.

All in all, I love this game and it earned its place as a nostalgic game, if forgotten often in favor of Mario, Zelda,the original Final Fantasy, and even Dragon Warrior. Just keep it away from young kids.