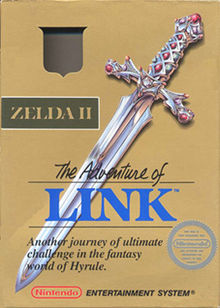 Zelda 2: The Adventure of Link is the second installment in the famous Legend of Zelda series. Like many of the early NES games (Final Fantasy, Mario, Castlevania) this second installment is considered the 'Black Sheep' of the series, and many gamers despise it. However, I am not among them. This is in my top 5 Zelda games. Yep, you've got it - a review from someone who adores Zelda 2 and isn't afraid to admit it.

Zelda 2 is quite different from its predecessor and is technically the only Zelda game that counts as an RPG. Zelda 2 opens with a scrolling screen and (in my opinion) the best title theme in the series. In this scroll, you find out that all is not well in Hyrule - that there is a third piece of the Triforce that is missing, sealed away in the Great Palace. Impa, Zelda's nursemaid, tells Link of another Princess Zelda of long ago, sealed in a deep slumber, whom Link must awaken with the power of the 6 crystals to be placed in palaces the world over. Link then 'sets out on his most adventuresome quest yet.'

The game opens with Princess Zelda right in front of you, in contrast to the first game where most of the characters in the introduction remained well hidden until the ending. This Zelda, unlike its predecessor, is a side-scroller. That's not to say the top-down overworld was abandoned; at least, not entirely. Link ventures on the overworld from Point A to Point B, and you can walk into and explore various locations of interest during the game, where the point of view then shifts from overhead to side-scrolling. Another unique feature of this game is that Link has lives. Yes, that's right. You start the game with 3 lives and can collect various Link dolls throughout the game to get more lives. However, you should not collect them as soon as you see them, as you will eventually need all those Link dolls for the final dungeon, and once you get a Link doll, it never comes back.

The objective of the game is to place 6 crystals in 6 different palaces throughout Hyrule, and collect the items in the palace. Interestingly, you start the game with the crystals, as opposed to having to retrieve them from the dungeons. The gameplay in the dungeons is a lot like Castlevania as opposed to the top-down exploration of the first and later Zelda games. You enter a palace and take an elevator to the lower floors. During the exploration of the palace, you are sent to retrieve a certain item. However, a unique feature of this game is you do not equip items. They remain in your inventory and you simply use them when the game requires you to. For example, the candle in the first palace lights up caves. But you don't light it by hitting a certain button- the caves are simply dark before you get the candle and light afterwards. The exceptions to this are the flute and the hammer. The flute you must use twice: once to get rid of a certain obstacle leading to the 6th and 7th dungeons, and the second time to find the hidden 6th dungeon. You can use the hammer to destroy roadblocks and use it in your inventory. 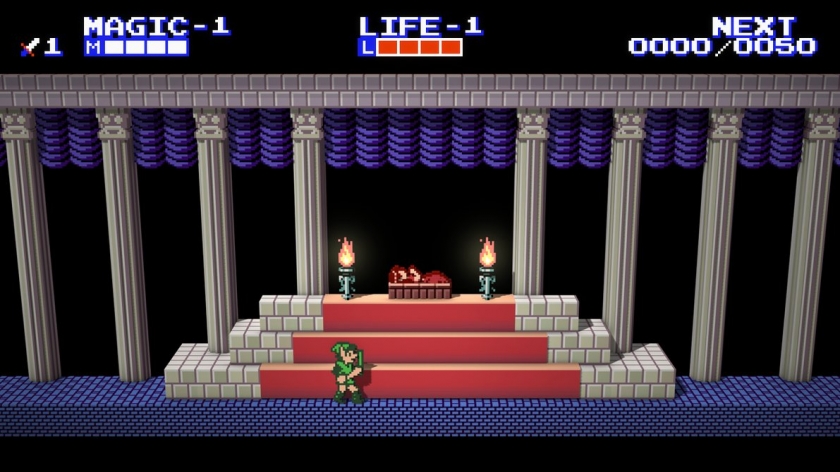 Another unique feature of Zelda II is the leveling system. You receive 3 stats - life, magic and attack - and are required to attack enemies in battle screens to level up these stats. The levels go from 1 to 8 and you build each stat up as you gain experience. In the Japanese version of this game, you could build up any stat you want- but with a catch. Once you lose all three lives and get a game over, your stats (all three of them) go back to the lowest of the 3. So if you've decided to go 8-8-1... well, I'll leave you to do the math. The American version took care of this by having all of them level up at certain point values, and having the player not get to pick, although you could skip raising your stat if you chose to.

About that game over thing: you get three lives and once they're gone, the game is over and Ganon returns to Hyrule. In fact, the whole subplot of the game is Ganon's minions are after Link to revive Ganon using Link's blood. So, this really ups the stakes if you think about it. If you die, Link is gone, Zelda is in a sleeping spell and Ganon takes over, so no one is left to save Hyrule. If this doesn't motivate you to complete what is a very hard game… nothing will.

Zelda 2 requires a lot of patience. The first two levels are easy, but Death Mountain, given to you right after the second palace, is one of the hardest dungeons in the series. You only have 3 spells, and no power-ups, and the game expects you to go through a hard maze to get to the hammer, complete with alligator-like creatures that take up 2 of your hearts (when you only have five) AND even if by some miracle you manage to jump over them, they still throw their axes at you! The final 2 dungeons are no picnic, but at least by then you have a lot of spells and your stats are leveled up enough. To add insult to injury, say you die during Death Mountain. You are sent back to the start of the game. I am thankful this feature was never added to later Zeldas. The only time the game is merciful to you on this is at the final dungeon, where if you die there, they send you back to the start of that dungeon (providing you continue.) If you want to save and come back, have fun trekking across the entire world map and through the area of lava to that last palace. Fun fact: the overworld to Zelda 1 is located in Zelda 2. It is located in the area where you get the Hammer.

There is magic in this game, and another interesting feature is the towns. There are eight of them in Zelda 2, all named after the Sages in Ocarina of Time. Actually, the sages are named after the towns as this came first, except for Mido and Kasuto. Going into the towns is required to progress and, in each town, you are given a sidequest that will lead to you learning the new spell. The main exception is the first town, Rauru, where you are simply introduced to the wise man that teaches you the first of your 8 spells, the Shield Spell (Trust me, you'll need it.) You gain seven more spells, but each requires you to complete a sidequest. In Ruto, you must get a trophy to learn the Jump spell. That's right, Link jumps in this game! In Saria, you must find a lost mirror to learn Life. In Mido, you must retrieve the water of life to learn how to turn into a fairy. Yes, you need this spell to continue as there are several areas Link can't jump to.

In Nabooru, you must give water to a thirsty woman to learn fire, and in Darunia, you must rescue a kidnapped child to learn reflect, a spell that you only need for one boss, but is useful for a lot of other parts in the game as well. In the last two towns, you learn the Spell Spell, which is only used once, and the final wise man teaches you Thunder, which costs 4 magic containers but is needed for the final boss and can help you in the last dungeon. 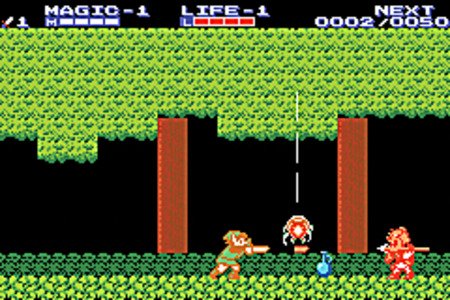 Are there powerups in this game? Yes, but you don't receive them by defeating dungeons. They are found scattered through Hyrule. You find them in various locations throughout the game. But by the final dungeon, even all of these and all the spells may not be enough.

This game is also where Dark Link was born. Like Agahnim, he went on to appear in future Zelda games.

The sound effects and soundtrack are typical of an NES game. That's not to say they are bad. That is part of the charm. The soundtrack is the place where Zelda 2 really shined over its predecessor. Zelda 2 has about 8 unique tracks to it, whereas the first game only had a title screen, the overworld, and two dungeon themes. Zelda 2 has the aforementioned title track, which sets the scene for the adventure you will be on. The game opens with a remixed version of the first overworld theme. The main notes are still there but the somber, yet upbeat overworld theme mixes the feeling of a long adventure. The town theme is peaceful, and the house theme is repetitive but charming. The random battle theme is my favorite (except for the final palace) and it's a good thing it's such a catchy tune as you will be hearing it a lot. The palace theme is a fan favorite, and multiple remixes can be found all over the web. Last but in no way least, we have the Great Palace theme, which can only be heard, not described.

It's fine not to like this game, but you can't really hate on the music, and Zelda 2 even received a nod in Super Smash Brothers with the palace theme and Great Temple remixed together.

Morally, how does Zelda 2 hold up? You do learn magic, but it is fantasy magic. The main concern for the occult is the Spell Spell, but it is only required once. The other concern is the ladies in red dresses in the towns. When they take Link into refill their life, you don't see what happens, and innuendo is implied. But…. You don't know for sure. Could Nintendo have had sexual intentions? Maybe, but some people just have sick minds and read too much into things.

Some interesting trivia: In the first two Zeldas, Christianity was the official religion of Hyrule. That doesn't really affect the moral score, but it's an interesting tidbit that newer Zelda fans might want to know if they want to consider playing the two games that started it all.

Overall, I find Zelda 2 sadly underrated and hated for no reason. It's not like it's the CD-I games. Sure, it's hard, but isn't a challenge and getting lost in an amazing fantasy world that you want to give your all to save part of the fun? Zelda 2 may be much maligned. However, had it been released as a stand alone and not attached to the Zelda series, it may be remembered far more fondly.
I still rate it a 10 out of 10. And from a Christian perspective, there's nothing really to complain about either. Just be sure to grind those stats!