Finnian and the Seven Mountains

Thank you Philip Kosloski for sending us a digital copy to review!

Finnian and the Seven Mountains is a 25-page long Christian comic about a man named Finnian who wants to find a lost sword because his village was raided by vikings. He wants to get revenge, so he asks a man who was fishing for a boat. He says that if Finnian helps him fish, he would show him where a boat is. Finnian helps him fish, and ironically, they caught so many fish in their nets that they could not carry them all. Finnian gets in a boat, and starts paddling. Weeks later, he arrives at an island that is supposed to have the sword. He gets hit by a giant wave but someone on the island named Brendan grabs his hand. Brendan takes him to an old man named Abba, who is a very wise man who the people on that island seem to speak to for help. Somehow, Abba knew that Finnian would come. He showed him around the island, and Finnian stayed there for a while, but when he had to leave, he slipped and almost fell into the ocean! He grabbed on to the cliff and climbed up. But when he did so, he loosened a rock and it fell down. Under that rock was a container. Inside that container was a map. It was a map that led to the sword he was looking for! But little did he know that vikings had another version of that map, but they only had half, but they were still going to the same place as Finnian...

I think that this book has a good art style which fits the book very well. It has a similar art style to a Marvel comic, except it doesen't have any action bubbles because there isn't any violence for those to fit in to. 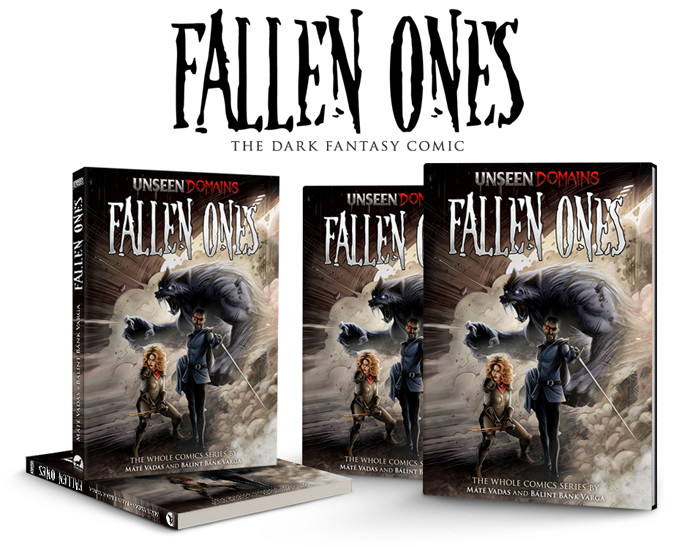 Fallen Ones is a Hungarian (with English versions available) web comic series made by Lycanthrope Studios. At the time of this review there is a successful Indiegogo Campaign that is seeking funds to produce a physical 90-page edition that combines the current five issues available. The hard copy version is available for $25 while the digital only edition is $5. There are various other bundles that involve posters, autographs, digital wallpapers and more.

Fallen Ones takes place in the Unseen Domains universe in the 17th century. Magic has awakened along with the undead and plagues that have obliterated and scattered the human race. Along with zombies, there are werewolves and witches disguising themselves as humans. Needless to say, once their true form is discovered they are quickly cast out or killed.

The three main characters are Brom, an outcast werewolf, Clemence, an assassin, and Tobias a lonely inventor. Though they all have different backgrounds, they share a common enemy; a demonic dark sect that must be stopped in order to save the remainder of humanity.
Like many comics, violence is a given and there is no shortage of bloodshed in this comic book series. Almost every issue has nudity as well and female breasts, male genitalia, and rear ends from both sexes are shown. Sexual encounters are present and leave little to the imagination. Cussing and blaspheming is also prevalent in this series as well.

After the creators reached out to me for coverage, I clicked on the freely available web comics on my lunch break at work. I was shocked by the nudity and content. There should be a NSFW warning for this series. These comics are gritty, smutty, and don’t portray Christianity in a positive light. I recommend steering clear of them if you have struggles with pornography. This series certainly goes against Philippians 4:8 and I recommend any Christian considering supporting this series read that verse before doing so.

Thank you Art Greenshaw for sending us an autographed issue to review!

The goal of Truthmonger Comics is to bring the much-needed messages of morality and spirituality into today’s youth through the medium of comic books.  Besides God, they are also inspired by the comic book legend, Stan Lee.  Some of the characters are dedicated to public figures who are living by their Christian values.  For example, the Silver Soldier Cecilia is named after the first lady of Texas, Cecilia Abbott.

Individually the Silver Soldiers have enhanced strength and speed. They are also bestowed with a unique ability to control various elements or animals.  When the Silver Soldiers are together, their strength is increased one hundred fold.  Satan’s demons had better watch out!

This forty-three page comic is broken into two parts with each ending at a cliff-hanger.  The last few pages go back in time and offer a new perspective on Jesus’ childhood.  There are some mature themes including drugs and teen pregnancy.   The spiritual warfare elements need to be taken into consideration as well. The Silver Soldiers must descend to Hell to rescue someone and they have to leave their bodies behind in a safe place.  Also, one of Lucifer’s human servants wears a pentagram belt buckle.  There are several Bible verses used throughout the story as well which is nice to see.