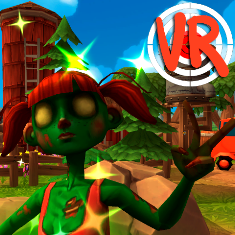 Thank you Funny Twins for sending us this game to review!

Shooting games are great for virtual reality. Just like other gaming platforms, VR has its fair share of zombie games and Shoot Mania VR Fun Zombies has you blasting away at zombies that are after your pumpkins, grills, or brain. There are three game modes (defense, wave, survival) and difficulty levels (easy, medium, hard) to choose from. In all honesty, I didn't see much difference between the wave and defense modes since both of them felt like 3D wave shooters.

When you first start the game you’ll be armed with a pistol that holds eight rounds at a time. Reloading takes precious time, which can be a big deal if you don't ration ammunition properly, since the zombies don't stop and wait for you. Better guns like shotguns, rifles, AK-47s, and chain guns are unlockable from 1,000-20,000 credits. There are even options to duel wield them if you have enough credits to spare.

Strong Points: Inexpensive and fun VR game
Weak Points: Inaccurate aiming/controls; only two levels; you can buy the guns via micro-transactions if you don’t want to earn them
Moral Warnings: You’re shooting zombies and their blood is green; when a zombie destroys something that you’re supposed to be protecting, they may flip you off as a taunt

Credits are only earned when you win a game. There’s no such thing as partial credit here. Points and credits are awarded for each zombie killed and other factors like the level and difficulty are taken into consideration as well. There are two levels to choose from and the city one is easier since cars driving by occasionally run over zombies that are in their way. The farm level is a little more challenging since you’re on your own. Both levels have birds flying overhead that you can get points for shooting down if you have time or ammo to spare.

Unlocking guns will take a while since you’ll earn about fifty credits a game on easy mode. If you’re in a hurry, you can unlock the guns via DLC purchases for $1 per 1,000 credits. For each unlocked gun, you’ll earn a Steam achievement. My favorite gun is the AK-47 since it holds thirty rounds and is quick to reload. Dual wielding them makes you pretty much invincible. 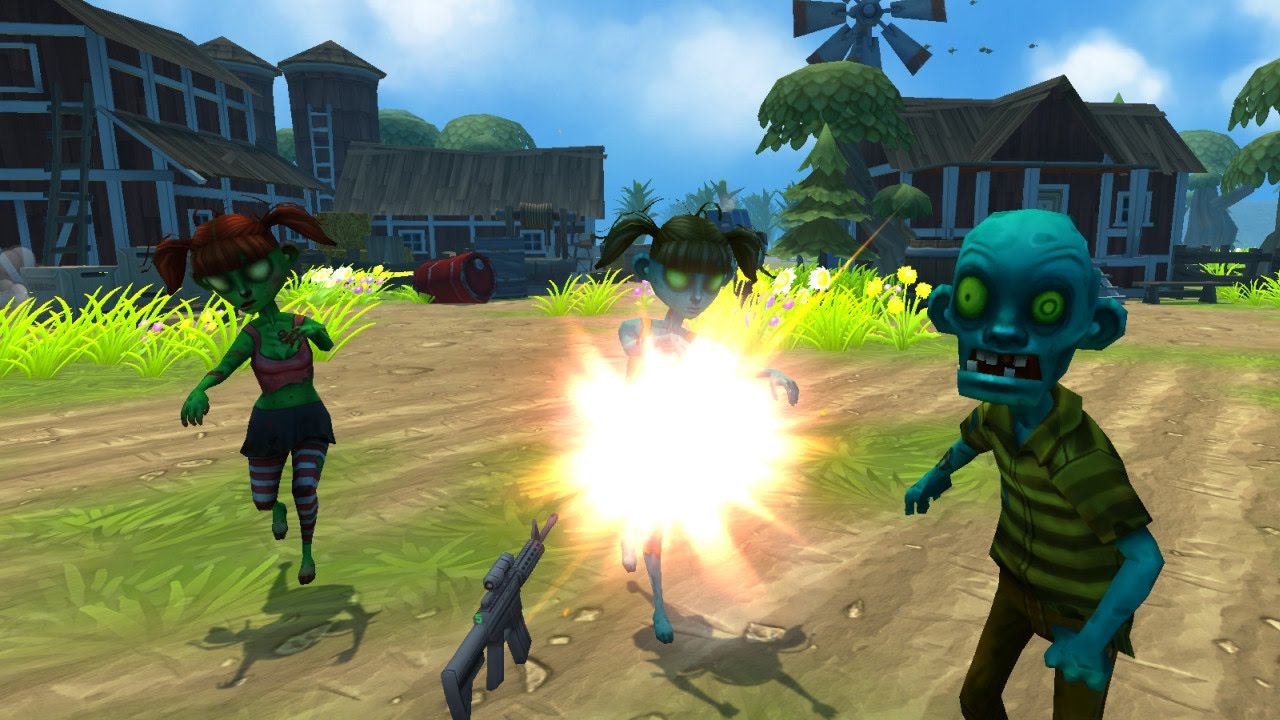 If you do lose an item you were supposed to protect, the zombies will taunt you. Sadly, one of those taunts include them flipping you off. Violence is a given in this shooting game and the zombies' blood is green in case you were wondering.

The levels are colorful and there are a few different types of zombies that you’ll be encountering. Some palette swapping takes place as the bigger ones come in different shades. The bigger the zombie, the more bullets they’ll need to take down. The skinnier ones only need a few rounds to defeat them.

In the end, this is a simple game that is fun to play in short spurts. There’s not a ton of variety, but the price tag takes that into consideration. The gun buyout is a bit annoying, but it’s not necessary. The controls are not very accurate and a laser pointer would be a nice addition to any of the available guns. Despite its flaws, Shoot Mania VR Fun Zombies is worth adding to your VR library if you’re a fan of shooting and zombie games.