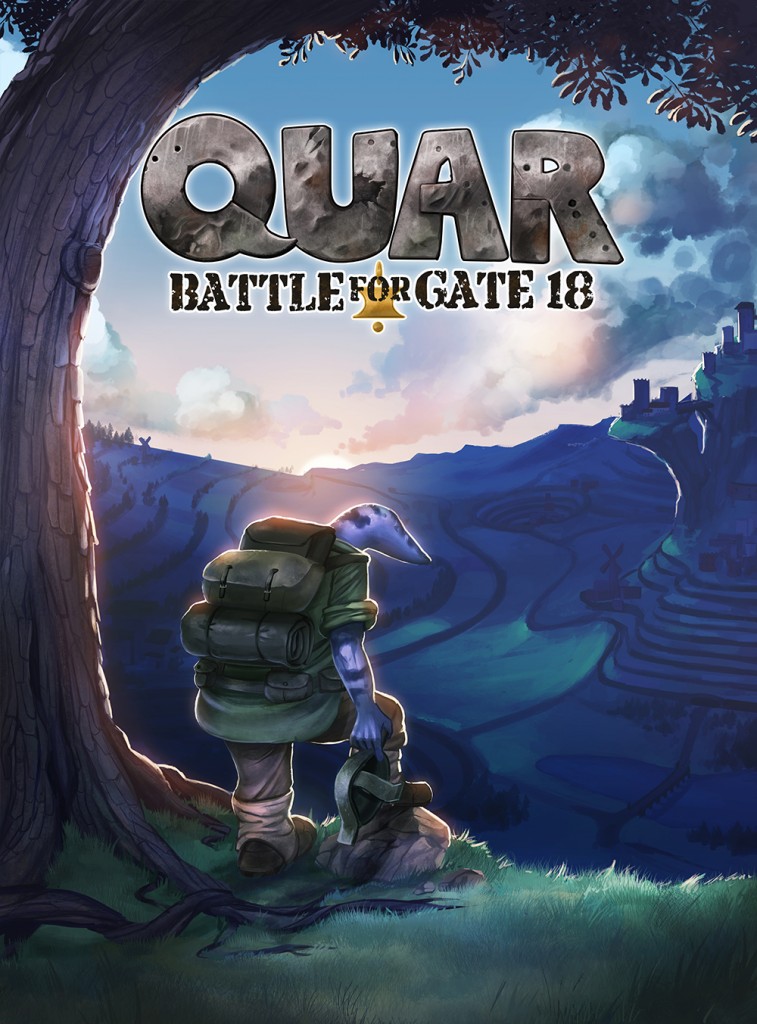 Thank you Steel Wool Games for sending us this game for review!

Quar: Battle for Gate 18 is based on the miniatures tabletop game This Quar's War. There are two main opposing factions, the Crusaders and the Royalists.  Quar life has had war as an almost constant for centuries.  The Crusaders have decided that in order to finally stop the hundreds of years of war, they must make it worse – so it can get better, and finally give the common people their freedom.  Battle for Gate 18 is a series of skirmishes that culminates in the historic eponymous battle for which the game is named.

Quar are an interesting race of humanoid anteater-like creatures.  They are intelligent, speak in a Scottish-like accent, and the game world has a World War I level of technology.  You get to fight with many types of infantry, cavalry, various kinds of tanks and other vehicles, and air strikes.  Depending on the unlocked units and the number of battle points you have in each mission, you can select a number of units to try to overwhelm your opponent using strategy and military might.  As you win battles you gain VP, which you can use to upgrade your unit buildings, which in turn upgrade your units and make them stronger and more powerful.  Which of course leads to victory in more battles.

The game takes place on what looks like a very large miniature playset set up on the floor.  But unlike your typical miniatures, everything is living, breathing, and moving as you stand there above them.  You can use the Vive's controllers to teleport to anywhere on the map, and thankfully, changing your direction without having to rotate your body was added in a recent patch, which makes stationary play at a desk much easier.  If that wasn't enough, you can also change size – then, you see that the Quar really aren't so small, but appear to be a few feet taller than you, and quite an imposing presence.  If you don't mind changing size often, there is a ton of details to be observed for the motivated by switching between overlord and soldier view. 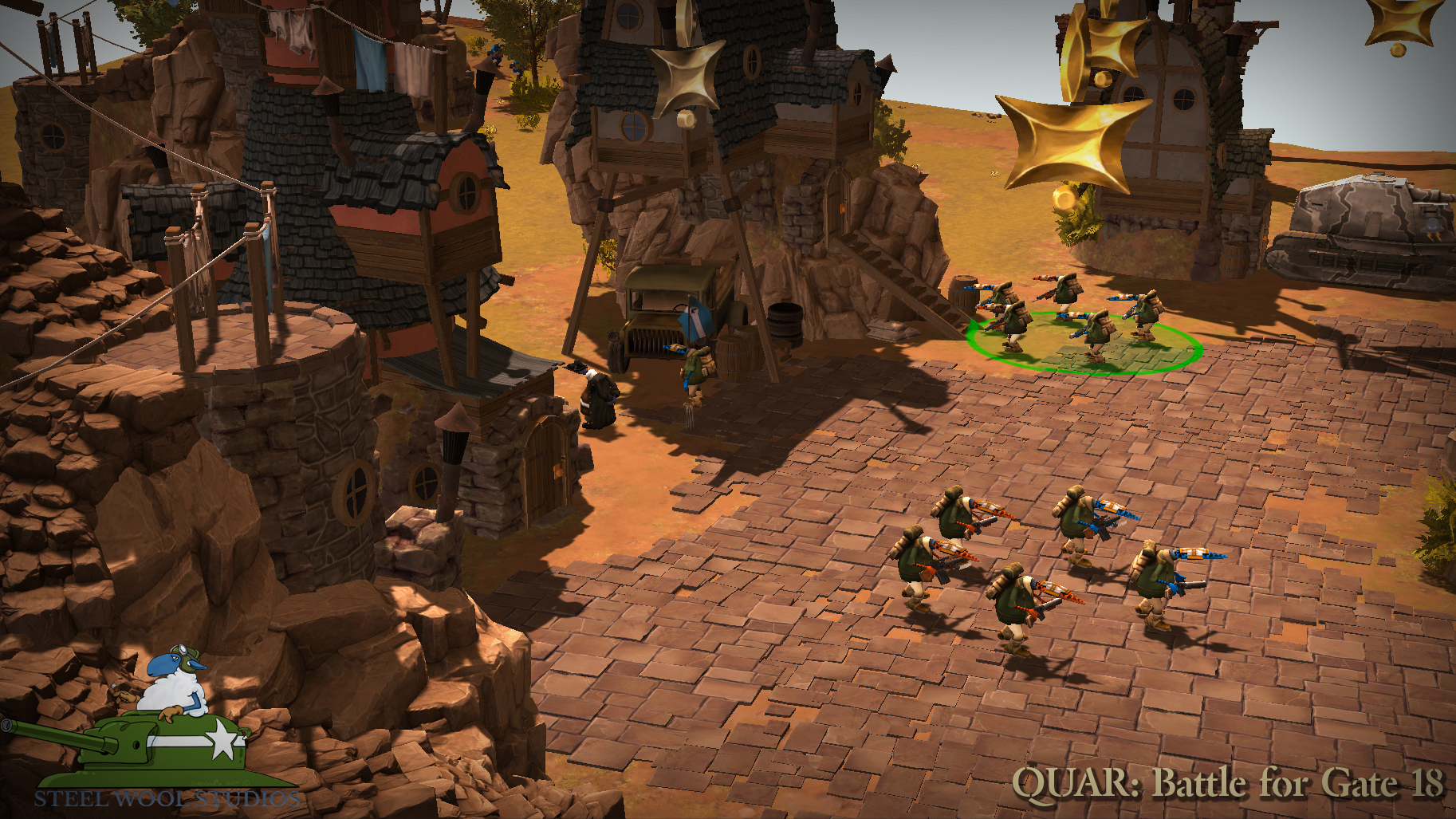 Strong Points: Charming game world and characters; nice, detailed graphics; good music and sound effects; well implemented turn based strategy system; being able to zoom in or out is very neat
Weak Points: Controls take getting used to
Moral Warnings: Battle between opposing armies, so people die from gunshots and various other weapons of war

The main gameplay consists of turn based battles, using a hex grid, with a base view in between.  While in base view, you can witness the correspondence between a soldier and his nephew.  This is fully voiced, and quite touching.  You can tell that a real child read the lines that were written for the boy, and their long distance conversations really do a great job of humanizing the Quar, as well as making you care about this world and why they fight.  They also give names to every unit, so if you lose one, it feels more personal.  I haven't noticed any actual impact on your effectiveness, but it again humanizes the Quar under your command.  It's a really nice touch, really.

In battle, you first choose your units as mentioned before, and then place them in some of the many spots allowed for your units.  There is a lot of implied strategy here, as depending on the terrain, you can gain cover advantages, be out in the open, or gain an advantage (or deficit!) with a pincer strike.  The options are endless, only limited by your strategic skills.  Each unit type also has strengths and weaknesses against various other unit types.  Some also have abilities, that can help compensate for weaknesses if used correctly, or make them even more dangerous on the field.  The commander's a good example – a mostly worthless unit some of the time, but practically indispensable when raising morale or ordering an air strike.

Each turn, you get to choose which unit goes next, and give them any orders you would like that is within their skillset.  You point at the unit using the Vive motion controllers, chose what they do, and then watch them do it in front of you. The controls mostly work well, though mistakes can happen, especially since they treat the touchpad as a d-pad, with options on the top, bottom, left, and right of the pad.  Several aspects of the game control scheme seems a bit wonky at first, but you do quickly adapt.  After all, this game was one of the very first turn-based strategy games in room scale VR ever.  It's natural that there may be some learning involved when it comes to the interface. 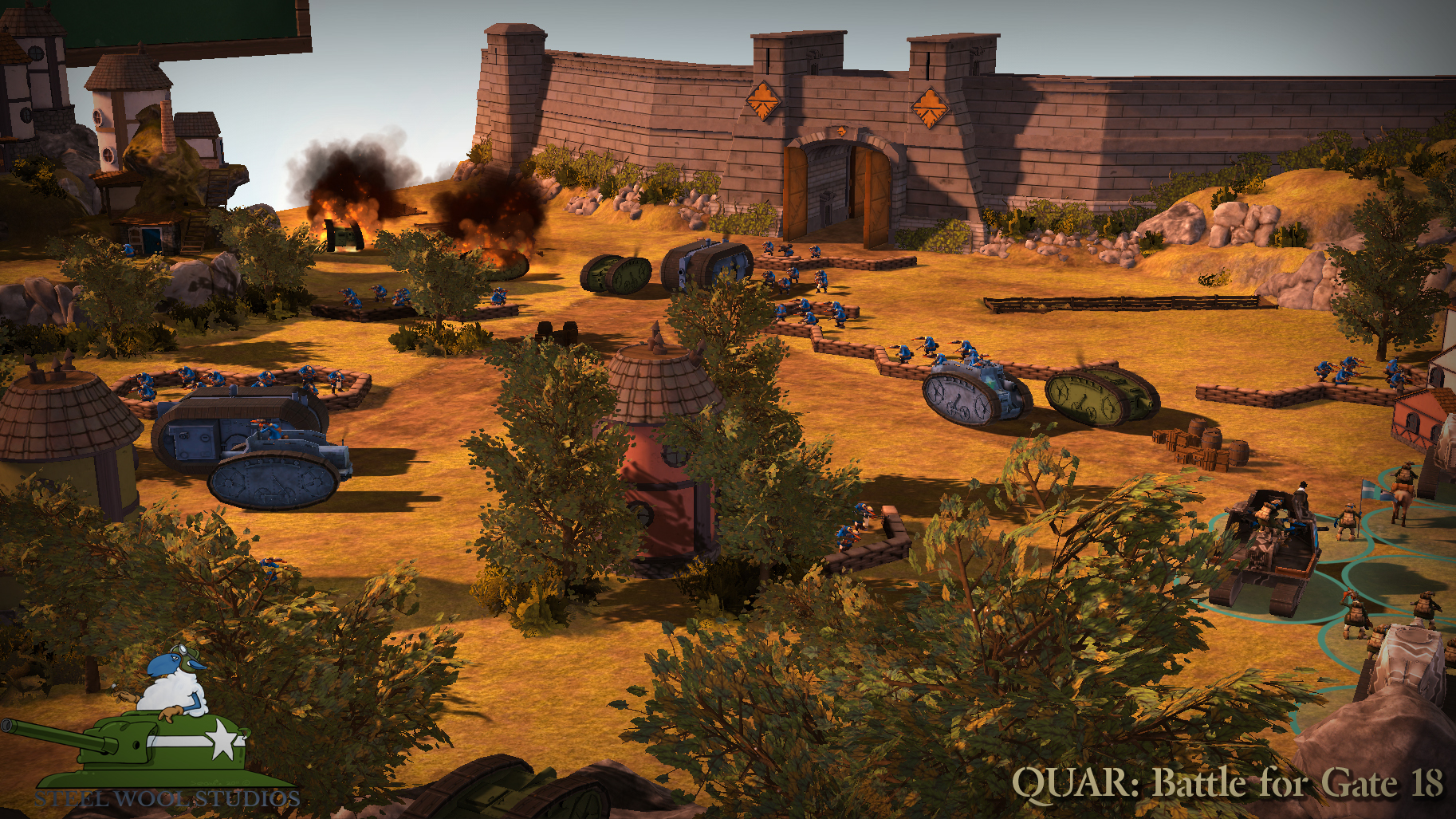 Quar is of a decent length, with each battle taking between ten and twenty minutes for most of them.  Longer battles seem to happen when the random number generator (RNG) works against you too much; there is definite strategy to battles, but a certain amount of luck as well, as your shots have a chance to miss – and that does indeed happen quite often.  It seems that each member of your attacking unit gets a certain number of shots, and if they get a lucky roll (the rolls are all invisible) they may hit their targets.  If they hit, they either die right away, or their vehicle gets visibly damaged.  Even after playing for a while, it's always a sight to see to watch a tank literally go up in flames when destroyed – and see the progress as you see more smoke and damage as they get closer to that gruesome end.

Despite some very small issues, like poor performance looking at water on some hardware, or Vive controllers acting up occasionally, there is actually an impressive amount of polish in this game.  It doesn't feel cheap or hokey, despite being made by an independent developer, and being low polygon models.  In many ways, it's actually one of the more ambitious VR games I have played to date, with no 2D option at all, and also one of the few with a fully developed world, storyline, and a fair amount of gameplay as well.  The developers suggest over six hours, and I already have seven, with some things still left to do.

Appropriateness-wise, this game is really clean.  Most of the talking is done between the uncle and nephew, and I didn't note any curse words, though admittedly it is really difficult to take notes with a screen strapped to your face.  Of course there is war and dying.  When a soldier dies, a flower is left in their place.  There is no blood.

Quar: Battle for Gate 18 is a really ambitious turn based strategy game, exclusive to the HTC Vive or SteamVR.  I was pleasantly surprised with this game, and if you enjoy turn based strategy, or are really into Quar miniatures and would like to delve deeper into their world, I would highly recommend this game.  Honestly, if you have a Vive and are looking for something different than the more typical first person fare, that is also a great reason to check out Quar: Battle for Gate 18.