I have fond memories of playing various light gun games for the Nintendo Entertainment System (NES) when I was (much) younger.  While I got to enjoy several (who didn't love Duck Hunt?), I also fondly recall Hogan's Alley.  This was a game where you play as a police officer who trains to fire upon gangsters, while avoiding all civilians.  This VR game, Lethal VR, is based on this concept.

Lethal VR also puts you in the role of a police recruit, where you must improve your sharpshooting and knife throwing skills.  You have to hit the various kinds of enemies, while avoiding all civilians.  There are also other skill tests where you hit non-human targets of several kinds.  A few levels even have you using multiple weapon types, where you have to hit each target with its matching weapon.

Rather than take place in a simple room with a few targets in front of you, or conversely, a large FBI compound with multiple rooms and hallways, this version of Hogan's Alley has the room adjust itself around you before your eyes. Unfortunately, this is not as neat as it sounds; during each mission the level design is more or less static, but you do get to watch each level set itself up while waiting to get started. 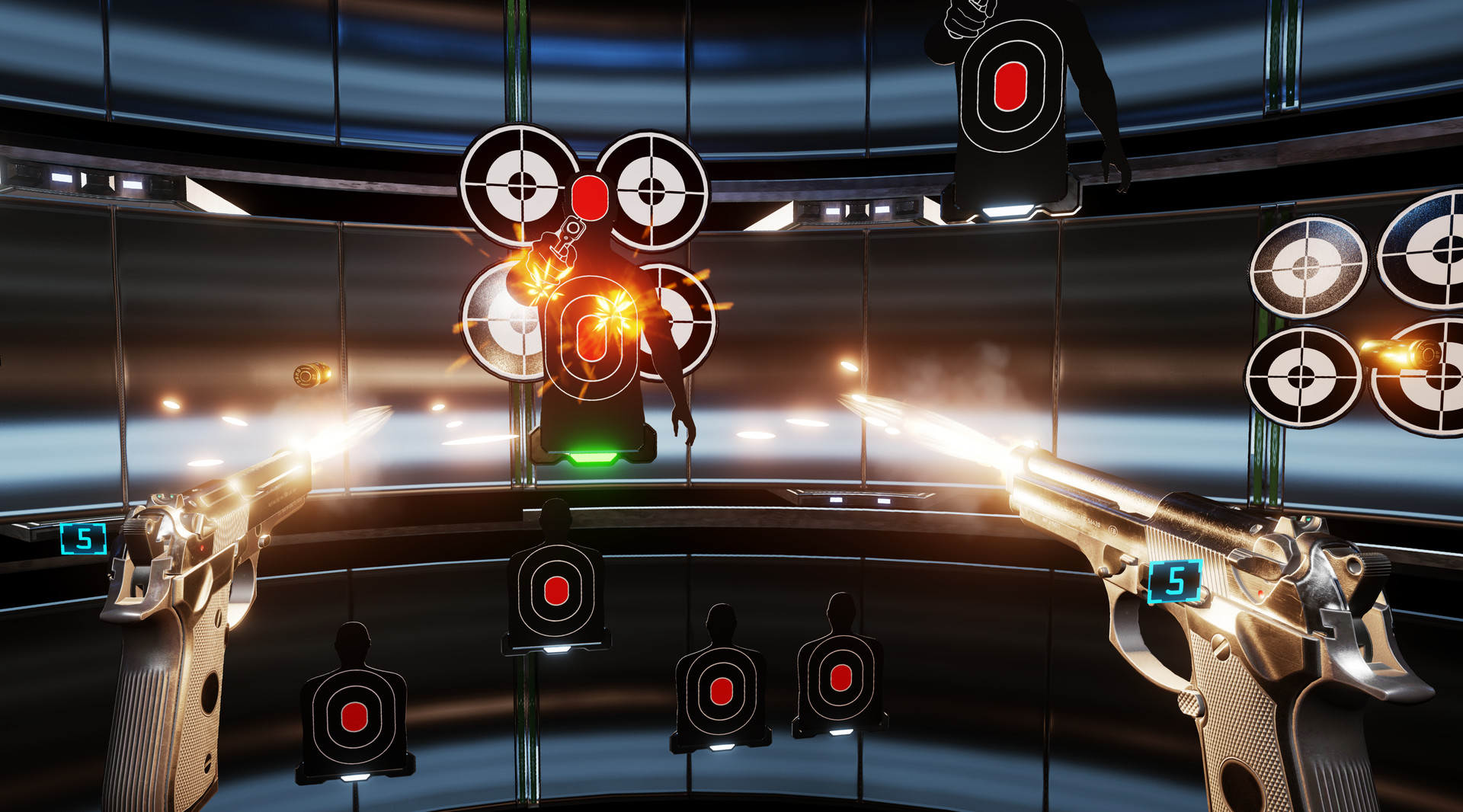 Strong Points: Great gun-toting action; nice weapon and target variety; lots of polish
Weak Points: Fairly short as is, since I saw all of the content in under two hours
Moral Warnings: Male and female frontal nudity in the form of the statues David and Venus de Milo; you can hit civilian cutouts with your shots/knives accidentally

Each of the HTC Vive controllers holds a weapon, though sometimes you only get one. A small annoyance I found is that sometimes it would choose my left hand, while other times my right, when I have a clear preference.  A way to switch this would be great, as I ended up switching controllers to get it right.

I found the gun play to be quite excellent.  The gun looks very realistic in your hand, and feels and sounds really great when you fire.  The Vive controllers have a different angle than real guns, but the in-game ones have you hold it like a real firearm, rather than how the controller might appear without the headset on. Shooting targets feels very accurate, and I never felt like a shot was missed because of anything other than my aiming skill.  As I got used to shooting, my firing and accuracy rate went up dramatically; getting quickdraw bonuses, and seeing the targets shatter quickly, is very satisfying.

Each level has a point requirement that you need to hit in order to unlock the next level.  There are many factors that influence the score, including shot accuracy, time between shots, time to complete the challenge, and more.  If you hit the wrong targets, or take too long to hit someone who is pointing a gun at you, you lose the mission.

I am not sure of all of the factors that relate to your score, because the game doesn’t tell you.  But there is a leaderboard, and you can always change your initials so that you can compete with your friends as you switch off with them.  The developers have responded to player feedback, and are going to implement a global leaderboard, which I really look forward to.  Competing to be the best recruit in the world should definitely extend the playtime significantly.  While I’m dreaming a bit, having some way to allow player created levels would be fantastic, and would dramatically improve replayability.  Team17, please make it so! 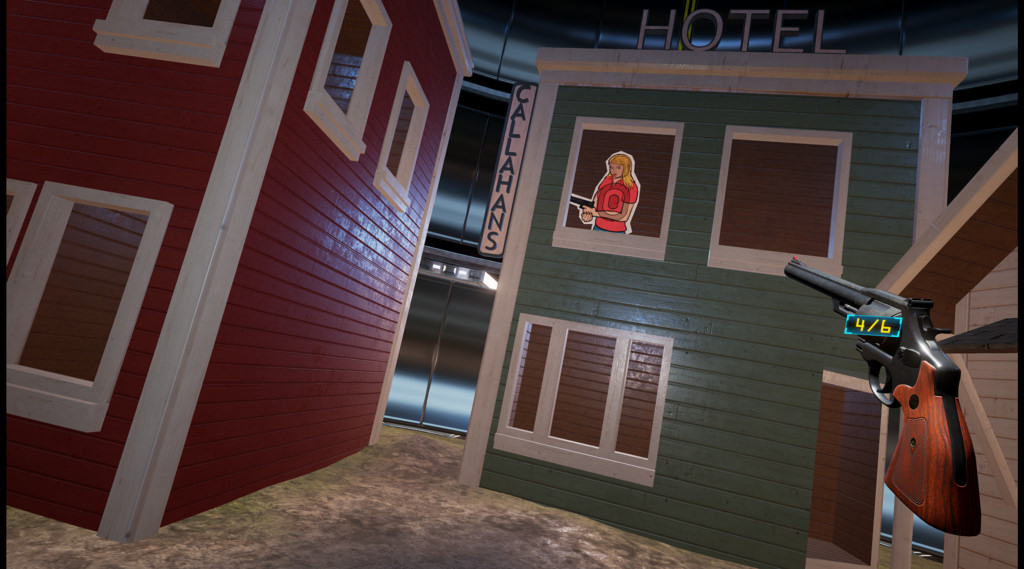 The game has about thirty levels, and I certainly enjoyed it.  Each difficulty has six levels, and there are five difficulties.  Each one gets more interesting, and seems to follow a theme.  I really liked the levels that had buildings and moving targets; the building called Hogan’s was a nice touch.  I admit I am not a huge fan of the knife throwing; it does work, but made my arms tired, and my accuracy left a lot to be desired.  But it never felt unfair; it’s just the nature of knife throwing I guess.  I love the gunplay though.

Lethal VR takes full advantage of the Vive’s room scale capabilities.  There is nothing to dodge, as cardboard cutouts of gangsters don’t shoot back at you, but targets can appear in any direction around you in the full 360 degree cylindrical environment.  As a result, many levels can be completed by just standing still and rotating your body, but not all.  Several have objects or barricades that stand in your way, where moving, leaning, or kneeling can help you hit your target, which is sometimes obstructed from view.

Given the high resource requirements in general for VR gaming, no VR games I have seen look nearly as photo-realistic as our existing 2D games.  This one is no exception.  Even still, everything looks very clean, clear, and well optimized. Having a high frame rate is king, and Lethal VR had no trouble keeping a steady frame rate on my AMD 290X.  Sound effects, while simple, also sound great as each gunshot has appropriate impact.  The developers also did a great job with spacial awareness for the sound effects.  Sometimes things will appear behind you, and the only way I knew it was because it sounded behind you.  I was very pleased that I could completely rely on audio cues to know where to turn next.  And on top of that, I don’t have to worry about hearing damage (or stray shots!), unlike when handling a real firearm.

From a moral standpoint, Lethal VR is actually really clean, with a few exceptions. All humans that you may fire upon (or not) are cutouts, very similar to the classic Hogan’s Alley that I mentioned earlier.  If you are not familiar with this, think a top half picture attached to a board that moves around.  It’s simple, but it works.  If you accidentally hit a civilian, you lose the mission, so there is no violent motive there.  I don’t consider shooting a gun to be really very violent in and of itself.  There is one bonus level that has you throwing a secret weapon at statues.  These statues are Michelangelo’s David and the classic Venus de Milo.  They are both nude statues, and are represented as such here as well.  The rest of the game is safe for children, if you don’t mind them shooting a realistic gun or throwing knives at various targets.

Lethal VR is a somewhat simple and short game, but I really enjoyed my time with it.  Sometimes, you don’t need complex plots or any other excuse to to just have fun and shoot things, especially in VR.  This style of game has been very popular on the HTC Vive for good reason – it’s simple, and a blast to play.  This game is certainly no exception.  It’s really well polished, and does what it sets out to do flawlessly, which is not always a given in the young VR market.  If the developers continue to listen to feedback and implement players' suggestions, I really believe this game can go from very good to great.  I look forward to seeing more improvements in the future!