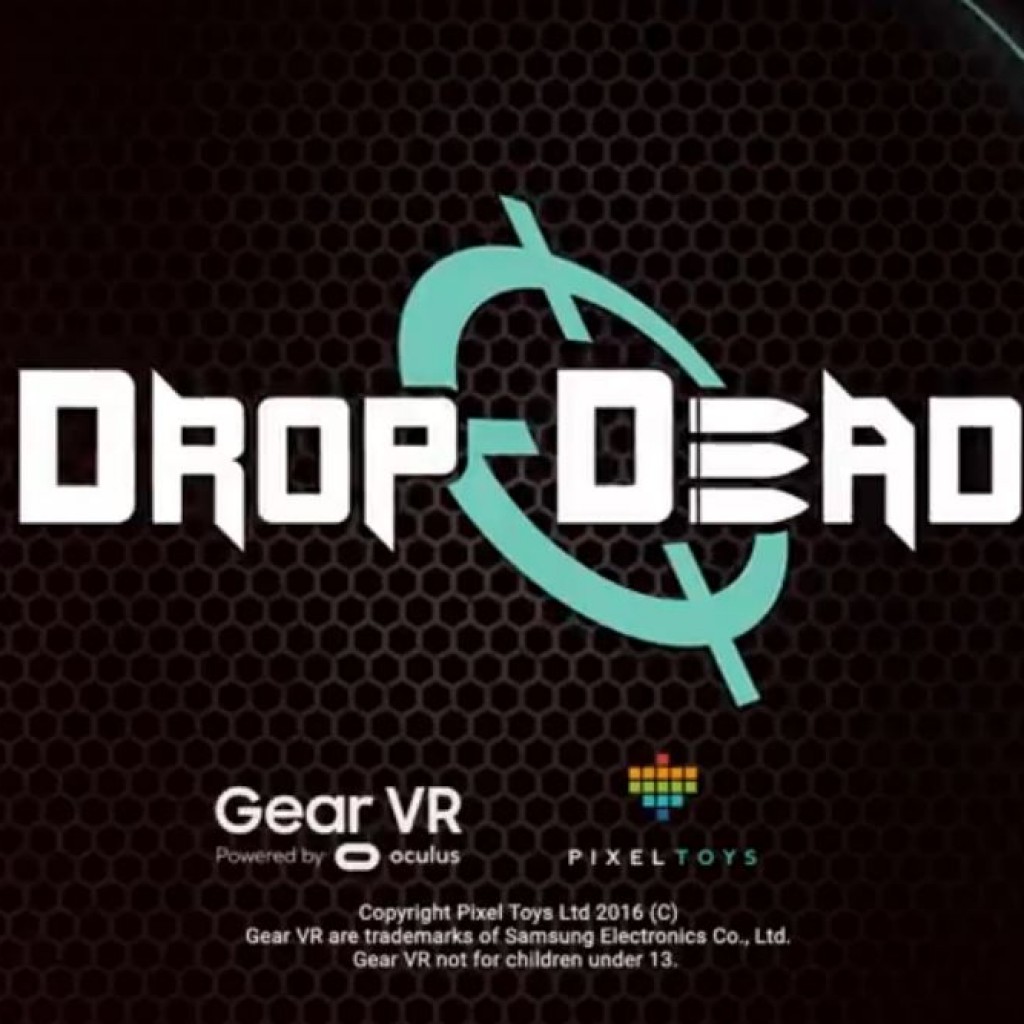 Thank you Pixel Toys for sending us this game to review!

Doctor Hironimus Monday has started an apocalypse and most of humanity has turned into brain craving zombies.  It’s up to you and a handful of agents left to save the world.  But how?   Graced with time traveling DNA you can go back in time and stop the mad doctor before it’s too late!

Drop Dead is an on-rails first person shooter that provides brief pauses to stop the incoming waves of zombies headed your way.  If you’re concerned about motion sickness, there’s a “Take it easy” mode that limits the sudden movements and immersive cut-scenes.  I played the “Full experience” and did not encounter any nausea while playing.

There are a couple of tutorial levels and thirteen single-player missions to go through in order to save the world from the zombie outbreak.  After each mission is completed you’ll be awarded between one and three stars depending on your time to complete the mission and for your shot accuracy. 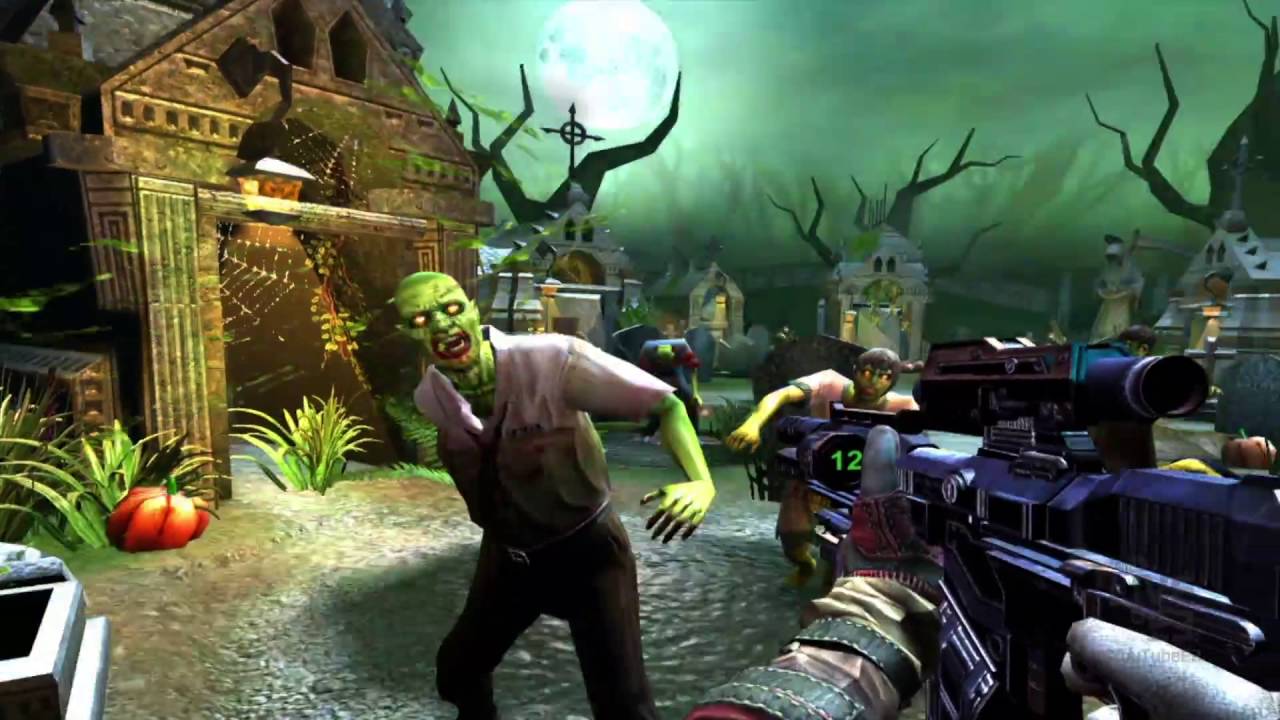 While Drop Dead supports using the headset to play, I used my Stratus XL controller and it worked flawlessly with this game.  The controls are pretty straightforward by using the triggers to shoot and the X button to reload.    On many occasions during an ammunition reload my gun would randomly jam or malfunction.  This happens often and usually at the worst moments possible as zombies are surrounding me.

Killing zombies wouldn’t be any fun unless you had some nice weapons to take them down with.  The guns you get to find throughout the game range from revolvers to rifles and machine guns.  Though the machine guns pump out a bunch of bullets, they are not as effective as those coming from a shotgun.  Power-ups like energy drinks come in handy and slow down the enemies for a brief moment.  Be sure to keep your eyes peeled for every possible weapon upgrade and power-up, the world is depending on you!

There’s a wide variety of zombies including fat ones that move slowly and take a lot of ammo before going down to fast and skinny ones.  Some attack with their bare hands while others wield weapons of their own.   It took a couple deaths before I realized I could shoot the balls of acid thrown by the acid-hurling zombies.  Your best bet is to take down the zombies as fast as possible and that means getting headshots as often as you can. 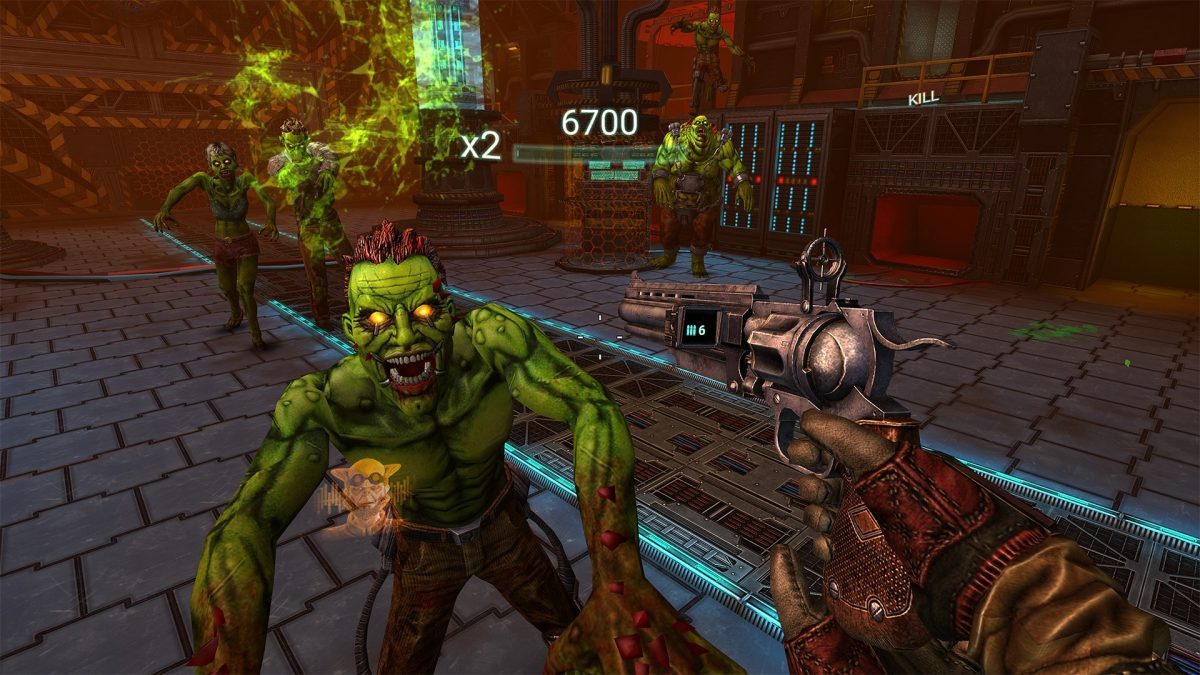 The zombie’s blood is green and splatters as you shoot them.  If you hit one of their limbs, it will detach.  Like many zombies they look pretty disturbing, especially when they get close and crowd around you before succumbing to death.  The visuals aren’t the greatest, but this game is designed to run off of a phone and not a high-end gaming PC.   There’s a decent amount of level variety ranging from farmyards to graveyards.

The voice acting is decent and the zombies sound like those in many popular horror movies.  The other agents are well voice acted but throw in some blaspheming and minor cuss words (d*mmit).

While there is support for online multiplayer I have not been able to successfully get a game going.  I have sent out and received invites but was never able to make a connection.  While multiplayer games are possible, they are hard to arrange with the seemingly small user base.

If you like zombie games and on-rails shooters, then Drop Dead may fit the bill.  Like many popular FPS games there is a significant amount of violence and some cussing.  The price is a reasonable $9.99 and is worth checking out if you can find some people to play online.

The Oculus Rift version of the game has the same graphics, but improved touch controls.  The accuracy and tracking are pretty good.  Having a laser pointer would have made aiming a lot simpler, but perhaps that would have made the game too easy.  The ability to dual wield guns would have been awesome, but you can only carry one gun at a time.  The revolver with infinite ammo goes back on your belt when it’s not being used.  Reloading the gun is accomplished by simply pointing it down and waiting a few seconds.  Reloading can be done even faster if you pull the trigger within a short time window.    Sadly the multiplayer lobbies are empty with estimated waiting times between fourteen and twenty-four minutes.  If you’re looking to play this game online, make sure you have plenty of friends to arrange games with.