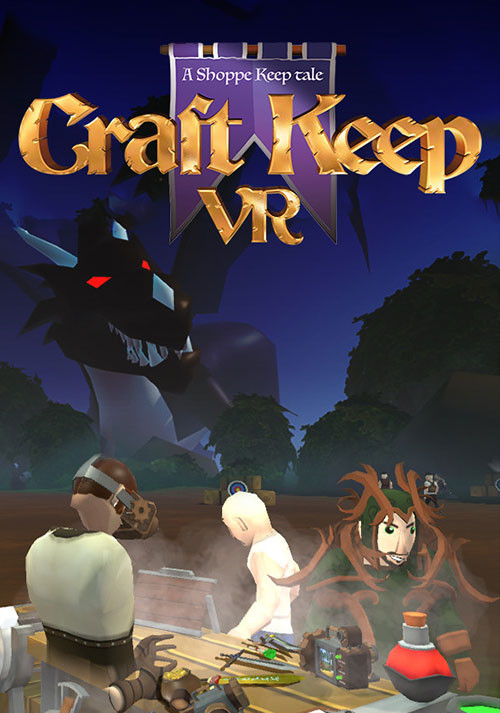 Thank you Excalibur Games for sending us this game to review!

While I have never fantasized about being a blacksmith, I must admit that Craft Keep makes it fun. In this VR game you get to craft made-to-order swords, arrows, pickaxes, and potions. Because you also brew potions and enchant weapons, you’re a bit of an alchemist too. There are seven chapters with different dilemmas that you get to solve by equipping the warriors and letting them handle the dangerous stuff.

You start off with some gold which can be used to buy flasks and herbs for mixing potions or hilts and handles for weapons. In one level you have to mine your own ore, but most of them allow you to order it. Since all of the jobs are timed, it’s nice to know that orders arrive instantly after you click the order button on the clipboard. Sometimes an item has to be unlocked by completing another job before you can have it available for purchase.

Your work area has a storage chest where your orders are deposited. This chest is where you have to put your reward money to have it credited to your wallet. Be careful as some items can fly out of this chest as you’re shuffling them around trying to grab a specific thing. I have lost significant progress due to items rolling out of my reach. Thankfully, story advancing requests keep coming by in case you lose or accidentally use an important item. There are also plenty of random jobs that can help you earn money needed to buy components. 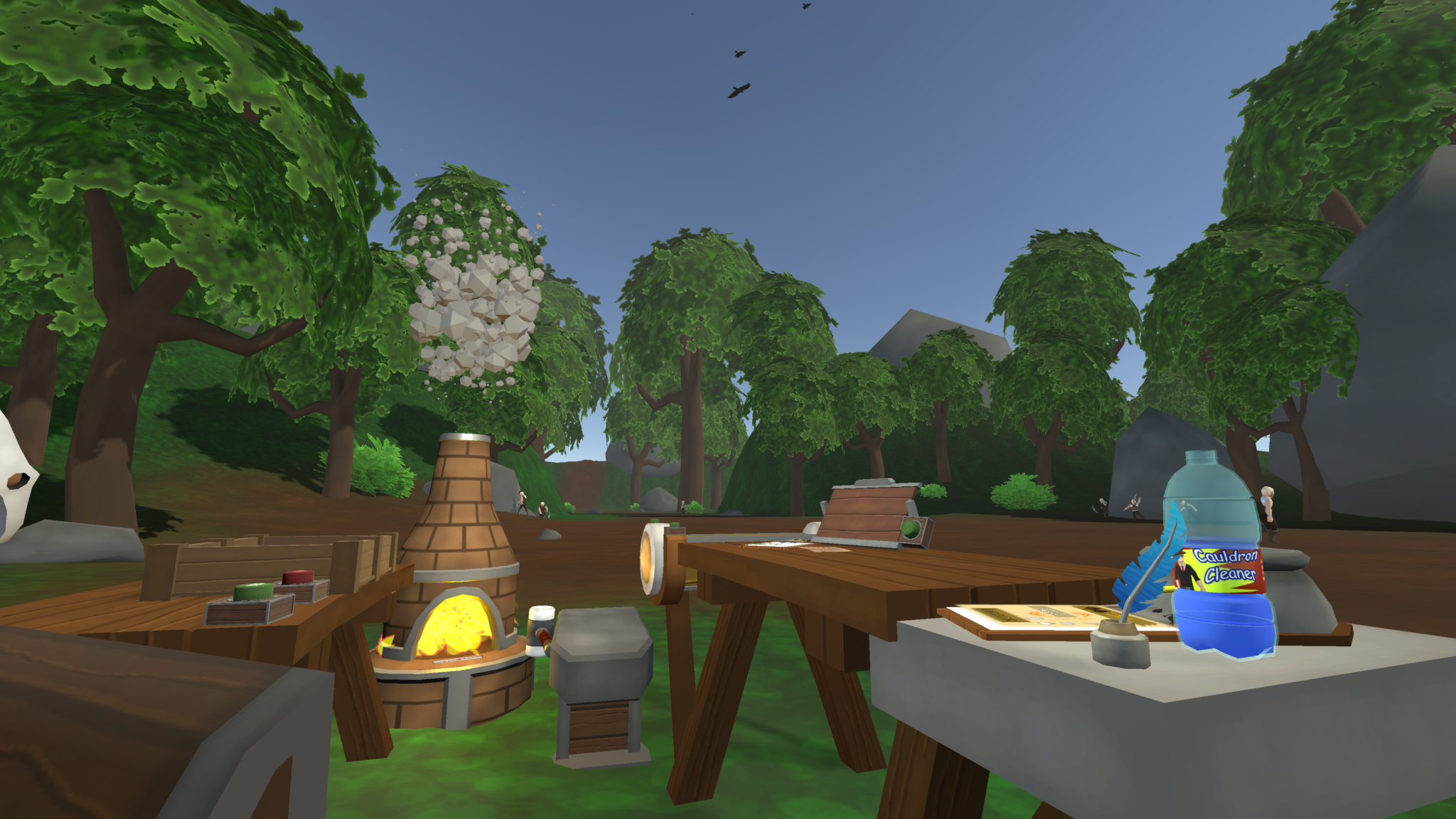 Strong Points: Brewing potions and crafting weapons is fun in VR
Weak Points: The Rift version requires room setup to be completed using the Oculus software and Steam; it’s easy to get disoriented in and outside of this game; attaching blades/axes is a little cumbersome; some objects fall out of range and are inaccessible; level breaking glitches
Moral Warnings: Language (hell, *ss); alcohol and drunkenness; rune magic and necromancy

If you don’t have the necessary components or don’t feel like taking on a job, you can decline it without penalty. However, if you accept a job and don’t complete it due to running out of time or by not having the required parts, you’ll lose some gold. You have a limited amount of time before you can accept or reject a job before the customer gives up and walks away. One time a customer got stuck leaving my work area and I had to restart that chapter from the beginning.

Sadly, customers are not the only ones getting disoriented in this game. I really got myself turned around and managed to twist up my Oculus Rift cable quite a bit. If your play space doesn’t meet Steam’s VR requirements, you can configure it to standing only and get around via teleporting. With all of the teleporting I did, I got rather disoriented after leaving the game. For several minutes after exiting the game my brain was expecting me to be somewhere else every time I blinked! Thankfully, I didn’t experience any motion sickness while in the game.

Configuring Craft Keep for the Rift takes a little more effort than the Vive because you have to calibrate both the Rift and Steam VR programs. Even though I have enough room for Oculus’s room scale, Steam needed more space. When I first launched the game, I only had the Rift calibrated and everything was too high for me to reach and the tutorial was difficult to navigate through. Once properly calibrated, the game functioned much better with the exception of a few glitches. 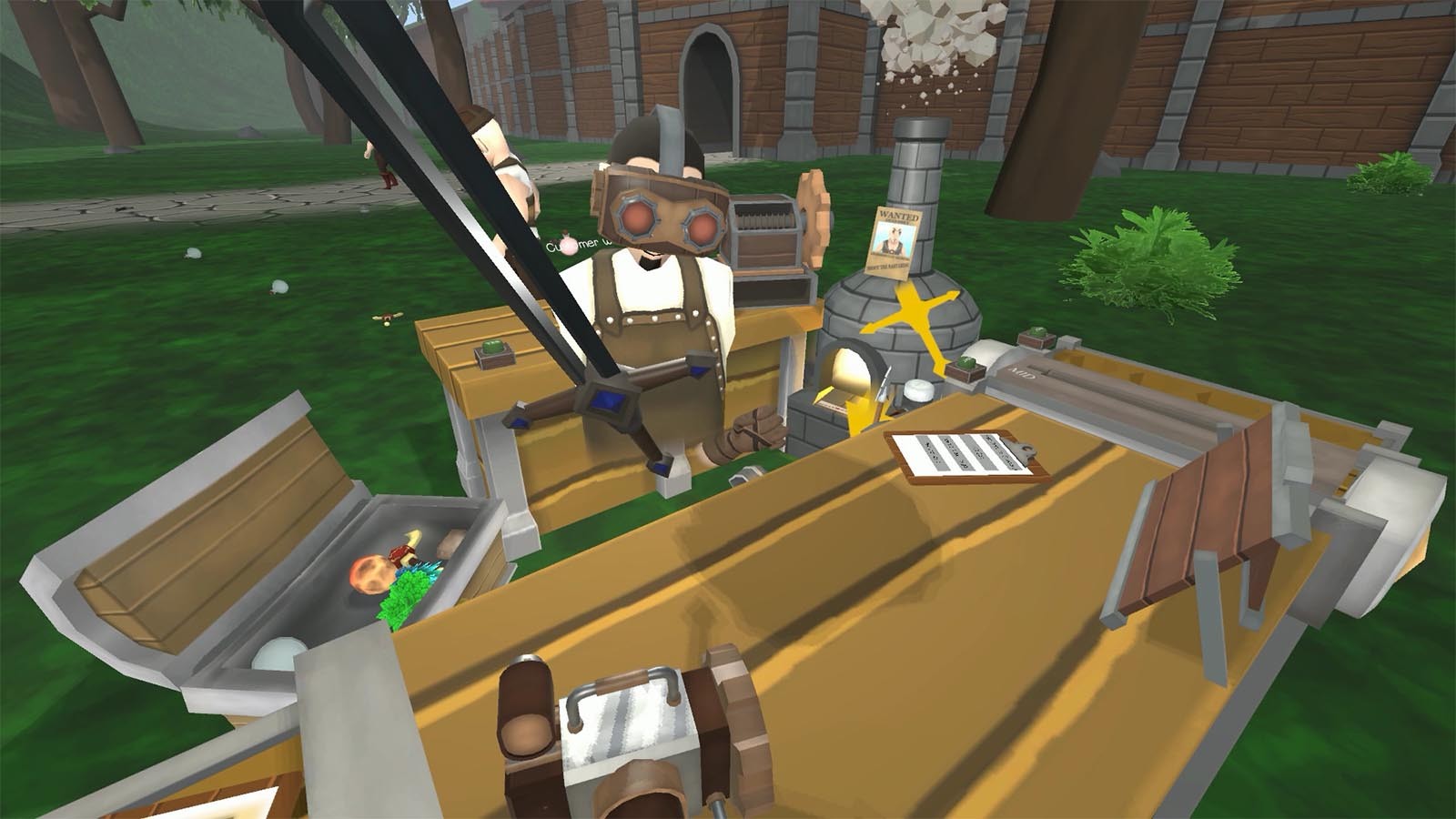 Some of the alchemy recipes are not clear and you’ll have to rely on customer instructions or your memory when they stop telling you. Attaching the blades to their hilts takes a couple of tries and is not very intuitive. When pouring molten metal into the mold you’re left with the pouring canister which you can’t do much with. The mold has spots for four of them, but you’re often required to make more than four in a chapter. Without any other alternatives, I found myself throwing them in random directions to keep my work area clean.

Later on in the game, you’ll be asked to etch runes into blades and to enchant them. One of the common enemies is a necromancer who you help warriors defeat by providing them with weapons. You’ll also be asked to brew poisonous concoctions. I was disappointed by the language (hell, *ss) in this game.

The main campaign can be completed in a couple of hours. There is an endless mode and a firing range if you want to shoot human shaped targets with a crossbow or gun. If you don’t mind the bloodless violence, magic use, and language, Craft Keep is a fun VR title worth picking up. Just make sure you have plenty of room to enjoy it without getting tangled up.