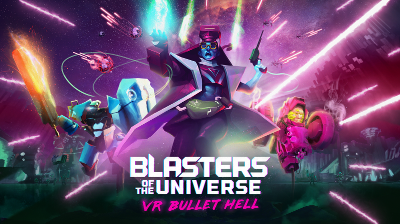 Thank you Secret Location for sending us this game to review!

It didn’t take long for the virtual reality marketplace to get flooded with shovelware games. We have reviewed plenty of sub-par wave shooters that don’t stand out from the crowd. There’s also a metric ton of retro themed games out there. With two strikes against it, I wasn’t anticipating much from Blasters of the Universe. I’m quite happy to say that Blasters of the Universe is a gem of a VR game and one of my favorites that I have played this year.

The game’s story is rather simple but functional. The “god” of the ‘80s arcades has been sucked into virtual reality and challenges you to conquer him. Of course, he won’t go down easily and hurls his various alien themed minions in your general direction.

True to its Shoot ‘em Up theme, you get a customizable gun that has various parts to change out to tweak its firing power, speed, and capacity. The base gun gets the job done, but each level has a couple of unlockables worth looking into. Some worthwhile upgrades are firing clusters of bullets and ammo that refills itself for each enemy taken down. 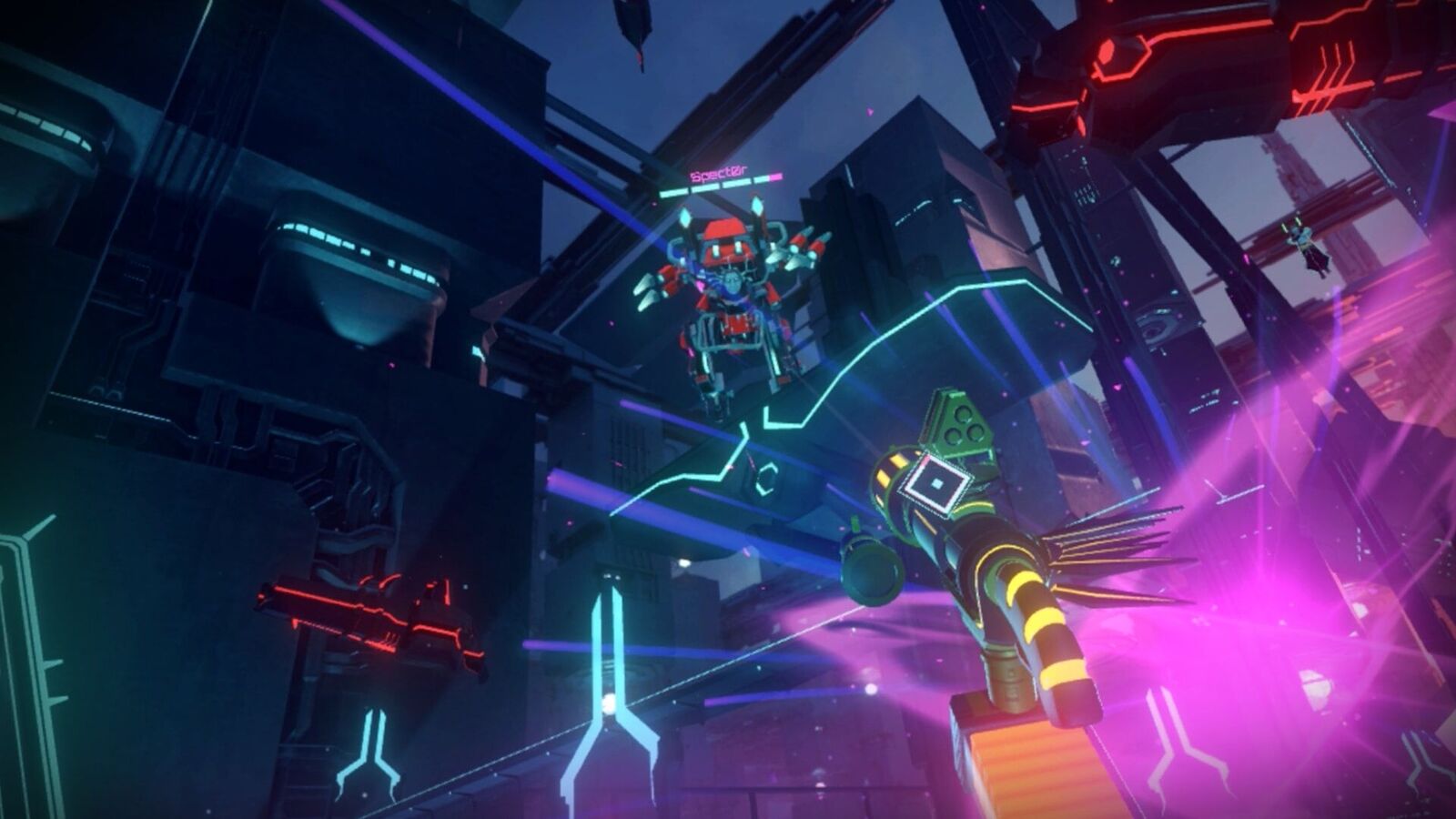 Besides your gun, you’ll also have a trusty shield. This shield is crucial to protecting your only weak spot, your head. Your head is vulnerable from all angles and you’ll have to physically dodge out of the way from swarms of bullets coming at you from multiple directions at once. The shield has a health bar that gradually refills during periods of non-use. Bullet grid attacks and powerful laser beams will destroy your shield so try to dodge those manually if you’re able to. There are numerous shield upgrades that vary in size and recharge time. You’ll need your shield deployed as much as possible; however, in order to refill your ammo you’ll need to drop your shield temporarily. Be sure to utilize small breaks in enemy waves to refill your ammo.

The enemy variety is pretty good with flying and ground based units that will try to flank you from the sides after a short while. The enemy forces move around quite a bit and targeting them quickly takes some skill, especially once you move away from the laser sight in favor of other weapon upgrades. Like all bullet heck games, there’s a formidable boss at the end of each of the levels in this title.

At the end of each level you’ll be shown a chart of your stats and progress. You’ll be shown the level progress (if you did not complete it), the number of bullets fired/blocked, enemies killed, head shots given and near misses that you’ve received. There are endless modes available if you want to see how long you can survive with your five life hearts. 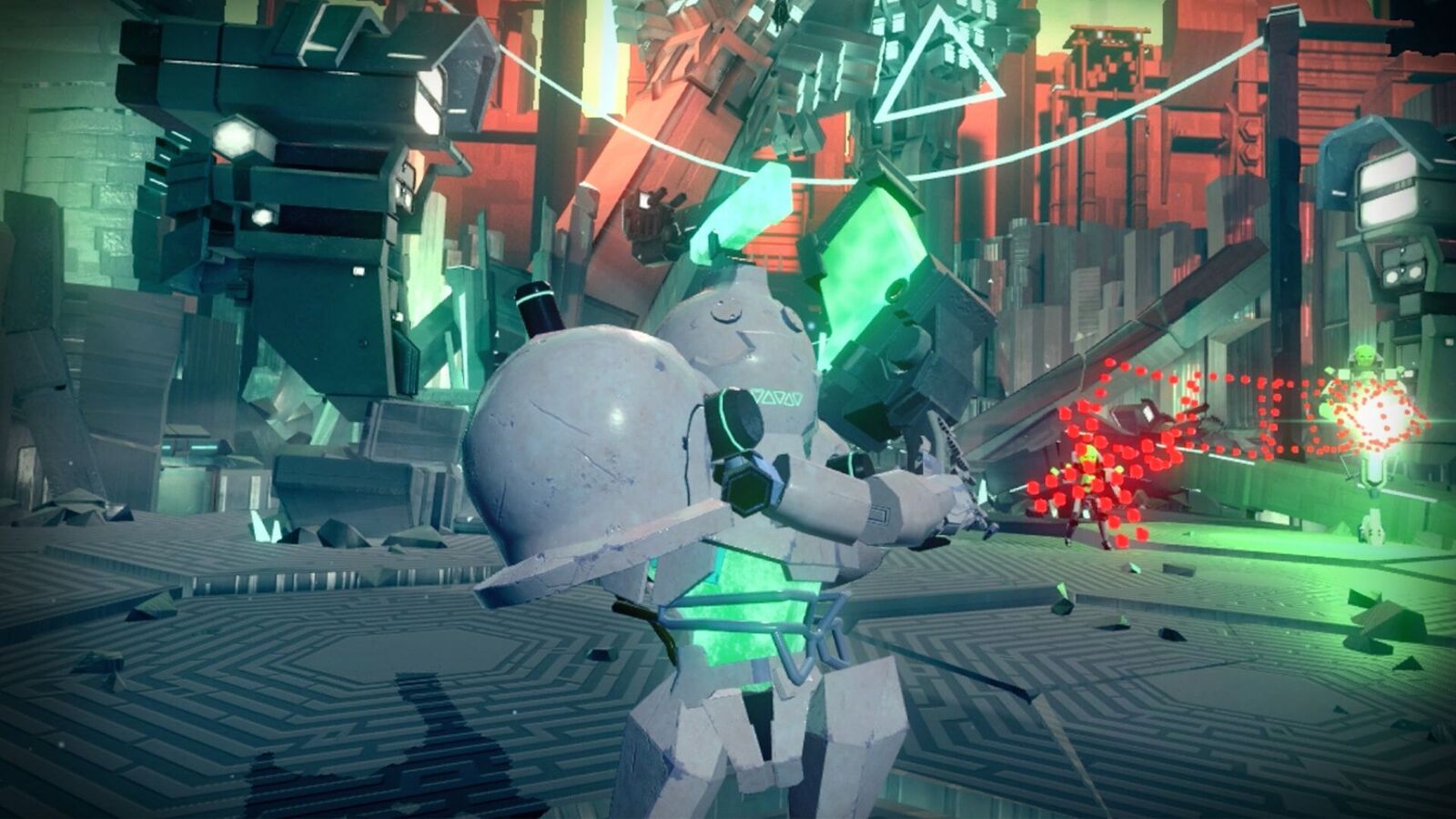 Occasionally you’ll unlock a temporary power up like the ability to fire a devastating laser beam. Be sure to take advantage of this ability when given the chance to do so! If you’re proud of your performance, you can see how you stack up on the Steam leaderboards. There are thirty-seven achievements to unlock as well.

The voice acting in this title is decent, but sadly consists of some foul language that should not be heard by young children. If it wasn’t for the language, I’d be happy to show this game off to everyone. I love how my recently played Steam games show up in my Oculus library. Blasters of the Universe usually runs fine when playing through the Oculus software, but one time the gun's sound effects were missing. Since it ran fine every other time, this seems to be an isolated instance.

If you don’t mind some sci-fi shooting and language, Blasters of the Universe is worth adding to your VR library. The price tag is a reasonable fifteen dollars and is sure to provide hours of entertainment. It’s a fun way to work off some calories too.