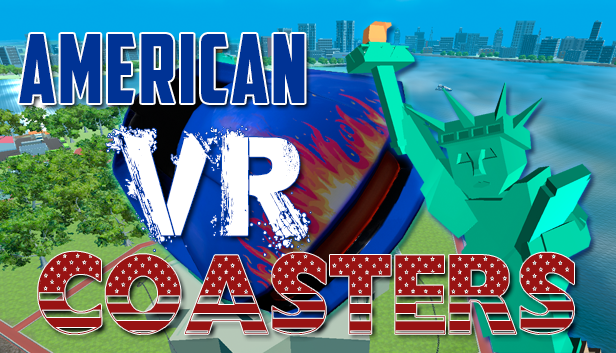 Thank you Funny Twins for sending us this game to review!

What is one of the first things that comes to mind when the idea of Virtual Reality (VR) flits through your imagination? Virtual roller coasters, of course! And honestly, there are quite a few on Steam, as this is a pretty common idea. American VR Coasters is a decent attempt for a low price, if you are looking for something to scare your friends with.

Here, we have the choice of four different roller coasters to choose from, which last about three to five minutes each. They move pretty fast, and each have some gimmick to make them unique. There is the city one, another wrapped around the statue of liberty, another loosely based on a popular coaster, and one that literally takes you to the clouds. 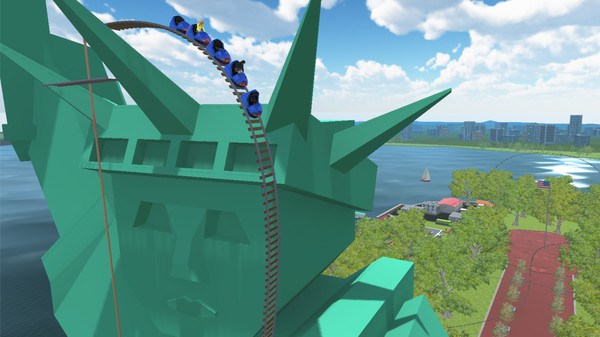 Strong Points: It's a roller coaster; looks and sounds decent; fun novelty to show your friends once or twice
Weak Points: Chances of motion sickness are very high
Moral Warnings: None!

As expected of a VR game, it takes place in first person, and it is highly recommended that you sit down before playing. Controls are not necessary, and you can't leave the level early without quitting the game entirely. Loading times are much longer than I expected. The coasters are all of the 'impossible in real life' variety, and do not show any structure; they are just tracks floating in the air.

The graphics get the job done, though I did see occasional frame rate issues on my NVIDIA GTX 1070. The first time I tried this, the sound didn't work; it was much more enjoyable once we got that sorted out. The music is pretty good, and the screams fit right in most of the time, though sometimes one would happen on a flat section that seemed out of place. 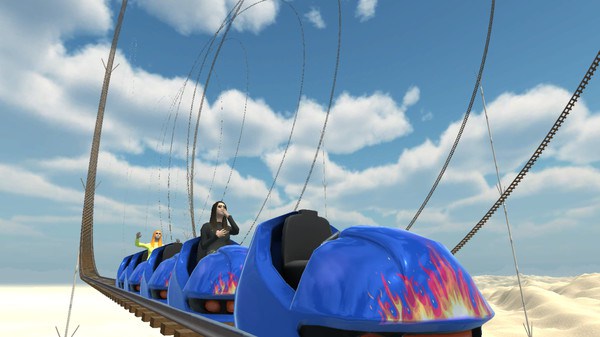 The experience is neat for the first few minutes, but I would not recommend more than one or two rides in one sitting. I sat through all four, and my stomach was complaining about it quite a bit, as motion sickness is likely an eventuality for most people who do something like this.

The coaster has four cars in it, with yours and two others filled. The girls in the seats wear really strange looking short shorts, but I don't think it's worth docking a point over. They occasionally move their arms up or cover their face, but are mostly otherwise static.

American VR Coasters is one of those silly VR experiences that everyone new to VR asks about to try just once. It's a 'hey, do you have a coaster simulator? That might be cool' type of thing. This one fits the bill, though I can't say that it is better or worse than the other ones on Steam. It might be worth a look on sale, though I suspect after you play it once and show it to your friends, you won't be doing it again.