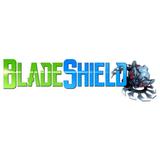 Since the beginning of time (well, the late 1970s), it has always been a fantasy of any warm-blooded human to wield a lightsaber and smack down foes.  BladeShield is an unlicensed (no Star Wars license from Lucasfilm/Disney) Virtual Reality (VR) game that has models that look like lightsabers, but are not.  They are BladeShields.  These weapons have two modes – one that happens to look a whole lot like a lightsaber, and a shield mode.  But they do sound awfully similar.

You hold two BladeShields, one in each hand.  The weapons can change from blade to shield mode with the press of the touchpad.  This change can be done at any time, and as often as you like.  Both the shield and blades can deflect projectile attacks, though the shield is much better at it.  If you do manage to deflect shots with your blade, you charge it up.  Once fully powered up, you can stab the blade into the ground and activate the power with the trigger to release an EMP blast that clears the screen in a moment.  It works great when you need it, though it is easy to forget that it's there.

At its core, BladeShield is what is commonly called a 'wave shooter'.  These games are common enough in VR that they have become a genre all their own, more or less. You have various waves of enemies that, once defeated, bring on the next wave.  You rank your success both on your score, and on what wave you reached.  It's a classic system that heralds back to the earliest days of gaming (Space Invaders, anyone?) and has resurged since we are in the early days of VR. 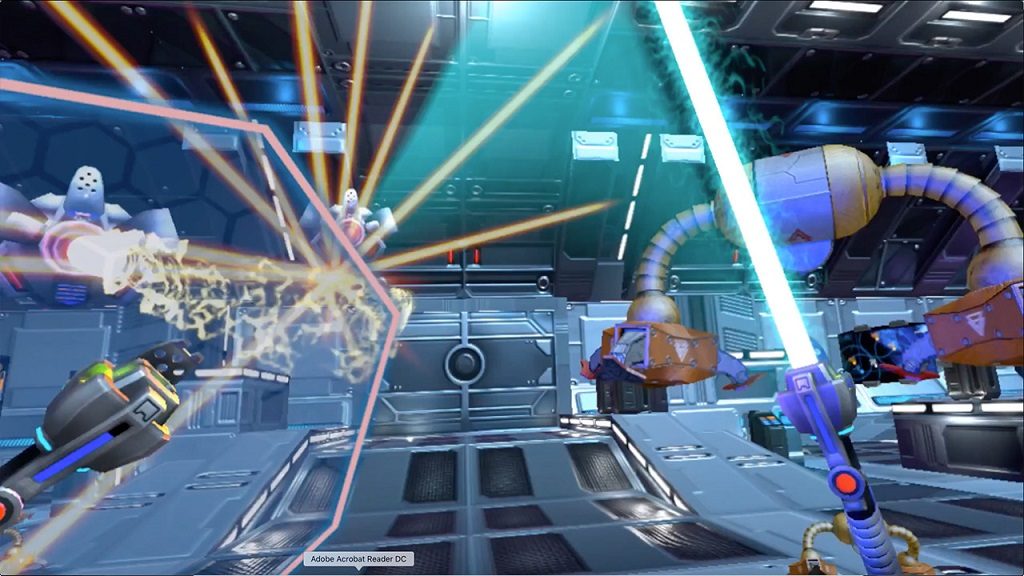 What makes it different is simply that it's mostly melee based rather than via firing a gun.  Each round, a set number of enemies come at you in waves.  There are some that you have to kill by reflecting shots back at them, and with others you typically will slash at them with your blade.  It is easier to aim the shots with your shield rather than the blade, but you can use both to deflect.  It's also fun in that you can use a shot from one enemy to kill another, if you are skilled enough to do that.

The most common enemies are the floating monocled robots that fly around you and shoot blasts your way.  They are easy to deflect and kill, and don't move too fast. Then there are ground based two legged walking types that leap at you, and the fun and fast round flying bots with a blade spinning around them.  They can be very dangerous, especially if you let them get behind you, so watch out!  There are also large turrets that shoot massive energy blasts at you that can only be defeated via shot reflection.  While it's technically possible with a blade, I hope you don't mind bringing out the shield while they are in play…. 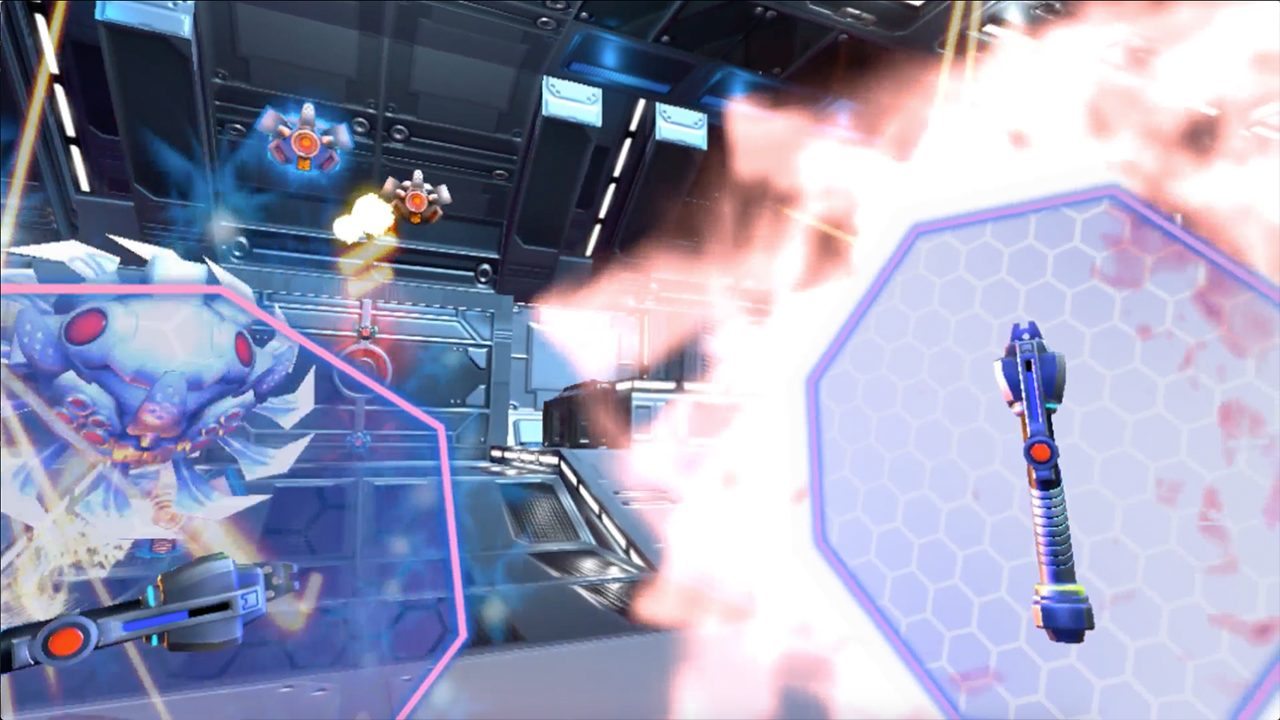 Each wave of enemies significantly changes this up, and I did not find it to get boring very quickly.  It's fun, exciting, and shooting for a high score is always a blast.  What impressed me is how polished this game is for such a low price.  I feel like they really did a great job striking the proper balance between the scale of a project, and the polishing of said project.  Any time you have a small development team, and especially a low price, you have to properly balance objectives.  Often, you have to choose between something with lots of content and variety, or a simple, highly polished experience.  This team chose the latter, and chose correctly.  Other games have made the wrong choice, and suffered for it, with a recent example being Bank Limit.

I'm sure this is not the only game like this.  After all, there are hundreds of glorified tech demos on Steam for VR these days.  But it does a good job at it, and it's fairly polished as well.  The only problem I had is that my NVIDIA driver would regularly crash on startup, which thankfully went away with a newer driver.  I have been in contact with the developer, and they have been very responsive and helpful in dealing with this issue.

At the fantastic price of $2.99, BladeShield is really a no brainer.  If you have a VR kit, you should get this game at such a wonderful price.  There are almost certainly more advanced wave shooters out there, or ones with more content, but if you are looking for the simple thrill of slicing and bouncing shots back at enemy robots, with wave after wave of increasing difficulty, then this is a great place to get your fix.  And at that price, I highly recommend it.