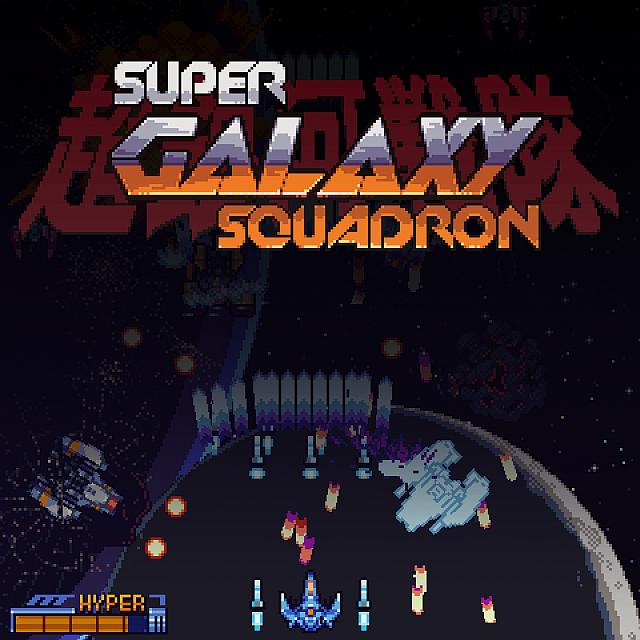 Thank you New Blood Interactive for sending us a review code for this game!

In 2335, contact with the Ceti alien race was made and it was peaceful until the anti-Ceti human supremacist group, Terra Nova, attacked them twenty five years later.  The war was devastating to both sides and it's up to a group of elite fighters, the Super Galaxy Squadron,  to put an end to it.  There are  six bosses that need to be suppressed and fourteen ships with different stats and weaponry to do the job.

Each ship has a unique combination of power, armor, and agility.  They also have different primary and secondary weapon attacks.  A powerful hyper attack becomes available once the hyper meter fills up from power-ups left behind from defeated enemies.  The primary and secondary weapons get stronger with random drops as well.  However, when your ship takes damage, it will lose a power-up.  Fortunately they float around for a little while and are not too difficult to reclaim.  That is of course if they're not surrounded by incoming bullets, missiles, and laser beams.

I like how the difficulty ramps up in this game.  While it is challenging, it did not raise my blood pressure while playing.  It did shame me a bit though.  I first went with a ship that had a lot of power (and a cool auto-firing drone), but kept failing miserably at the first boss.  My seven year old took an interest in the game and went with the default ship and beat the boss on his first try.  I was both humbled and disappointed that my son owned me and earned the first Steam achievement.  By switching to the default ship I was able to get the final boss which takes less than an hour to do.

Strong Points: Fun gameplay that is not too hard on the normal difficulty mode; lots of variety in playable ships; endless mode; game developer supports the Child's Play charity with every purchase
Weak Points: Arcade mode is rather short and can be completed in an hour
Moral Warnings: Space violence; minor language (hell)

To extend the replay value of this game, you can try to beat it with each ship type or play the endless mode.  In Super Galaxy Squadron your progress is saved to the level you are on.  If you get defeated by a boss, you'll have to restart the level to try again.  However, the checkpoint system, graphics, game modes, and difficulty levels get a major overhaul in the current beta of Super Galaxy Squadron Ex. The beta is free to try for current owners of the game.   Instructions to join it can be found here.

The beta right now is limited to the first stage and an endless mode.  It has better utilization of a widescreen monitor with health and hyper bars on the side instead of percentages and black bars on the side.   In the regular game I wish I had the option of tilting my monitor to be vertical to utilize the entire screen.

More game difficulties have been added to include a casual, veteran and hell mode with a normal and hardcore option in each of them.  Even the casual/normal difficulty is way more challenging in the beta than the original game.  My son or I were no longer able to beat the first (and only) boss on our first try.  We still had a lot of fun trying though!

The power-ups are clearer and the overall polish is improved in the beta.  The chiptunes/rock soundtrack remains the same and is still awesome to listen to.  The soundtrack is made by Random Encounter and  can be purchased for $1.99  on Steam.

Out of the two versions of the game I like the leniency of the original, but I appreciate the improved interface and the ability to restart from the boss battle instead of the whole level in the beta version.   I'll be keeping an eye on the beta version, but until it's released, I've reverted back to the original to hone my shooting skills.  If you like Shoot Em' Ups, I highly recommend Super Galaxy Squadron.  The price is a reasonable $7.99 and some of the proceeds go towards the Child's Play charity.