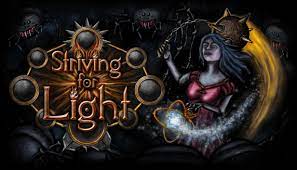 Thank You Igniting Spark Games for providing us with a preview code!

Igniting Spark Games answers the question that probably wasn’t asked by many: What if the player had a skill tree that never ended? Striving for Light takes that concept and puts it into action with an action role-playing rogue-lite. Rogue-lites have been a fairly popular genre in the indie scene due to their ease of implementation with limited resources. But with so many developers into the genre, it makes it all the more important to stand out from the hundreds of others.

Like many rogue-lites, Striving for Light has procedural-generated level design, random weapons and abilities, and the instance of permadeath. And when you die, some progress is carried over to the next playthrough. Being some parts twin-stick scooter, other parts Enter the Gungeon, and a splash of Mystery Dungeon level design, SFL will have you conquering level after level facing off against many kinds of mythical creatures. The goal is to defeat the boss of each floor to open a blue portal to the next one. At first, the map in your display is obscured and only expands with exploring the level. On these floors, you can sometimes come across a lower area where you fight an optional boss for extra goodies, or a purple portal leading back to town. This game autosaves during each significant feat, (usually the aforementioned actions I mentioned previously) so quitting and returning to your progress is simple.

Your character has two methods of attacking. She can either use melee weapons or ranged weapons. I prefer melee weapons because each weapon feels different from one another and you typically have to keep in mind the weapon being used. Some weapons like the scythe have a long-range and wide arc, but only the blade counts for damage. Ranged weapons consist of things like staves, bows, and throwing axes but they mostly feel the same. Each weapon is tied to a separate meter being green for endurance and blue for energy, representing melee and ranged attacks respectively. 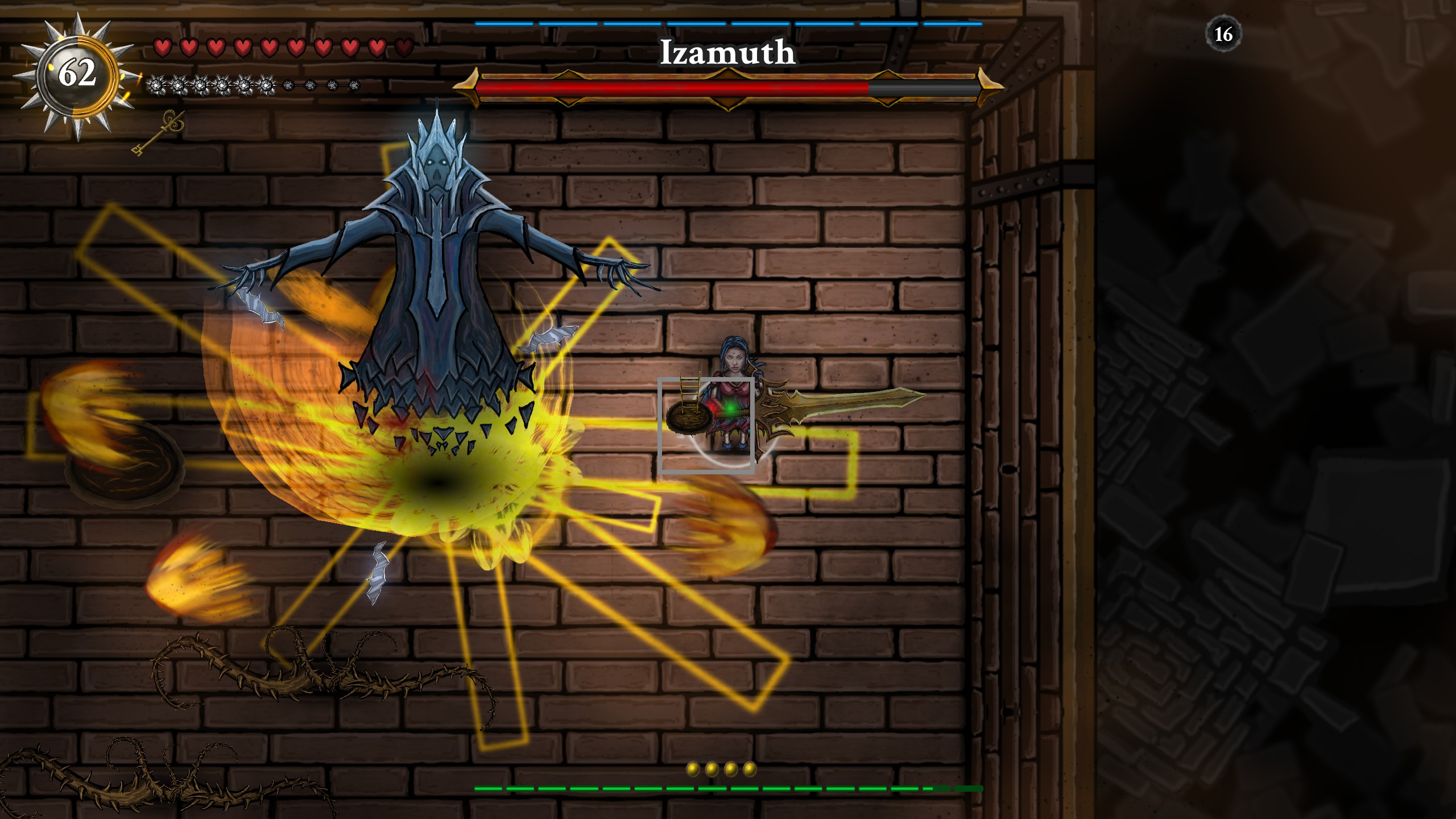 The standout feature is the skill tree, but I guess in this case it’s more like a skill web. Every time you level up or collect uncommon red crystals, that is one point towards the skill tree that starts from the middle and branches off into simple stat increases like increased energy/endurance generation or more heath, to major changes such as adding effects to your melee or ranged weapons. Due to the fact that with every point allocation the tree expands further and further, sometimes you’re gonna have to invest in stats or abilities that you otherwise normally wouldn’t. Because of this, there is a feature to disable unlocked abilities in the tree so that your build doesn’t get screwed over due to something out of your control. I found the best way to play is to focus either on melee or ranged skills in the beginning. If you try to do both, you may end up being underpowered in both playstyles.

Striving for Light uses a hand-drawn art style with dark shading and some tweening techniques used to animate individual body parts. It probably won’t appeal to everyone but I found it to be somewhat charming. Enemies look distinct and are immediately noticeable. There is a nice little attention to detail with the character model in regards to lighting as well. In the narrative, she is supposed to bring light to this rather dark world. She actually emits light and when you get closer to other models, they project shade and the shade follows the character. In terms of stage layout, due to the procedurally generated assets, sprites often layer on top of each other making the scenery look a bit like patchwork. The music and sound effects are also good with the music being more orchestral and sound effects being sharp. Although in terms of visuals, it is pretty hard to tell if you are hit by enemies as there is no distinct animation for it. If you’re not immediately paying attention to your health, it’ll be easy to lose more health than you realize.

Now if you opt for keyboard controls, Striving for Light feels like any twin-stick shooter, as I previously mentioned. You have a full 360-degrees to aim your weapons, which in my opinion, is the recommended control method. Gamepad controls are usable, but “theoretically” worse due to the lack of keybinding and that aiming is relegated to the four face buttons so your angles are greatly limited. The interface isn’t always the most functional such as in the skill tree menu, it doesn’t resume where you left off in it, instead of starting somewhere in the middle zoomed in. When you have a higher level, this can be annoying as you have to zoom out and find your place again. On the other hand, there is a search function in the skill tree so you can find the abilities if you remember the names of them. 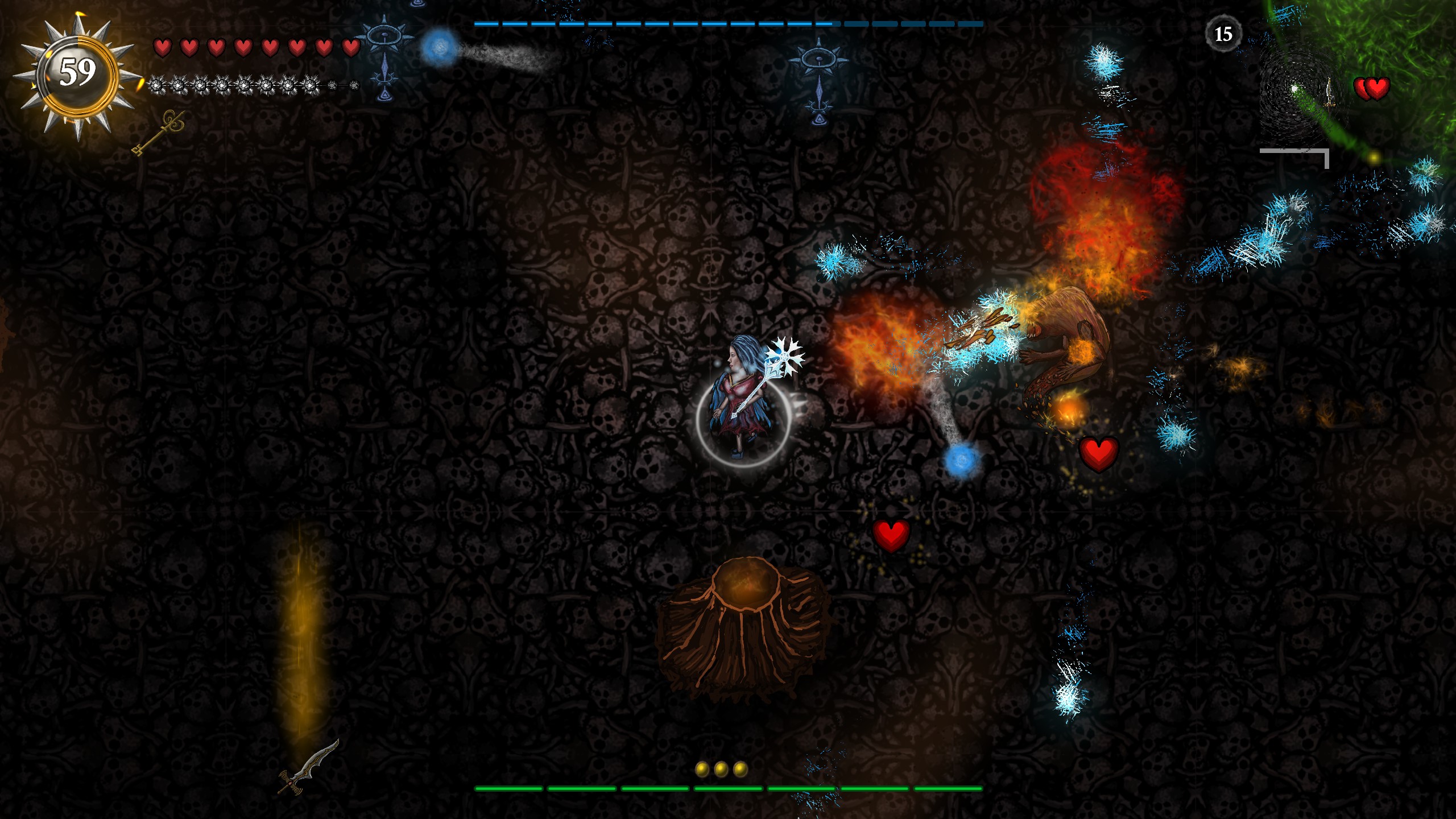 This one may not sound like much of an issue to some, but I found Striving for Light in its current state to be an easy rogue-lite. On my very second playthrough, I was able to reach a very high level with enemies posing little to no threat to me. I feel this happens for me because of just how easy it is to get very strong. Enemies only scale in health and numbers, and not damage so they’ll always be doing only one point of damage. There is also the point that many enemies are melee-focused and knockback from certain weapons is very strong. You can eventually reach a point where enemies will not pose a threat due to the abilities to keep them at bay. In general, you the player scale too quickly while the enemies don’t scale fast enough.


When it comes to stability, I did run into some bugs but they were typically fixed quickly. The most common thing a player will run into is crashes due to memory overload. Even then the crashes aren’t too worrisome as they will only set you back a minute at most due to the handy autosaving.

In regards to moral warnings, there are a few. Violence is a given, but when enemies die, a red mist resembling blood briefly appears. There is also usage of magic by both the player and enemies, but it’s general fairy tale magic. Two enemies look like a purple demon and a demonic bat-like creature. All other enemies tend to be mythical like phoenixes, giant lizards, and the like.

When it comes to Striving for Light, the foundation is there but I have the hardest time trying to figure out where it is all leading. It’s been in Early Access for about six months and will stay in the state for at least another six months, receiving frequent updates (as of this review). But there are these little niggles to me regarding enemy design and difficulty that leave me ever so slightly disappointed. Morally, it's not too bad right now with the only notable aspects being the violence and usage of magic. I will admit that I am a bit more forgiving towards Early Access titles as the buyer is effectively paying into a beta, but I don’t think I could recommend Striving for Light in its current state—although that has to boil down to what little it offers in the current state and not fundamental flaws in its mechanics. However, I do believe that it can and most likely will reach a point of recommendation when it fully releases down the road.