Thank You Yacht Club Games for providing us with a review code!

The only Shovel Knight game I played was the original release with the accompanying extra campaigns. It was enjoyable and with each subsequent campaign, you can see Yacht Club Games improve. This time around, they’re tackling the ever-popular action-roguelite genre. If people keep buying them, people will keep on making them. I’ve played a good handful of roguelites out there and I like them due to their arcade-like progression.

Shovel Knight Dig is a prequel to the Shovel Knight series and starts bombastically. Drill Knight and his crew, the Hexcavators, surprise Shovel Knight and steal his loot. They tunnel below searching for more riches in the depths of the crust known as The Well. Shovel Knight, being as heroic and chivalrous as ever, goes after them. In general, Dig is pretty light on the story, meant for players to jump right into the action.

Shovel Knight Dig controls almost the same. He can still run and jump, use his shovel to swipe at enemies, or dig through dirt or blocks. Digging takes center stage in this title. The goal is to continuously dig downward in randomly-generated levels while facing enemies and collecting gems on the way. It’s similar to something like the Spelunky series, although I personally never played them. Dig emphasizes speed because if you take too long, a huge spinning drill will creep down from the top of the screen and eventually one-shot you. The only moment time isn’t of the essence is if you go on the side paths for special goods where you can sometimes come across merchants and use the gems collected to purchase many upgrades. While digging downward, you’ll come across cogs and if you collect all three during each sublevel, it will give you two choices between a random accessory or recovering any lost health. The accessories are items you can pick up that grant Shovel Knight new abilities such as extended range on his shovel swipes, an extra life, or temporary immunity (on a cooldown) to specific hazards.

All of the accessories are bought with gems that are collected during runs. Even though there 50 achievements for Dig, I don’t believe a single one unlocks via an achievement. I prefer an unlock system based on achievements and not currency because it gives you that sense of progression. Unlocking items by an achievement system makes you feel like you’re getting better at the game whereas unlocking from currency only makes you feel “when” you get them instead of “if.” The accessories, for the most part, don’t change up the core gameplay as they feel more like stat boosts instead of game-altering mechanics, so this leads to an imbalance going too far in both directions. 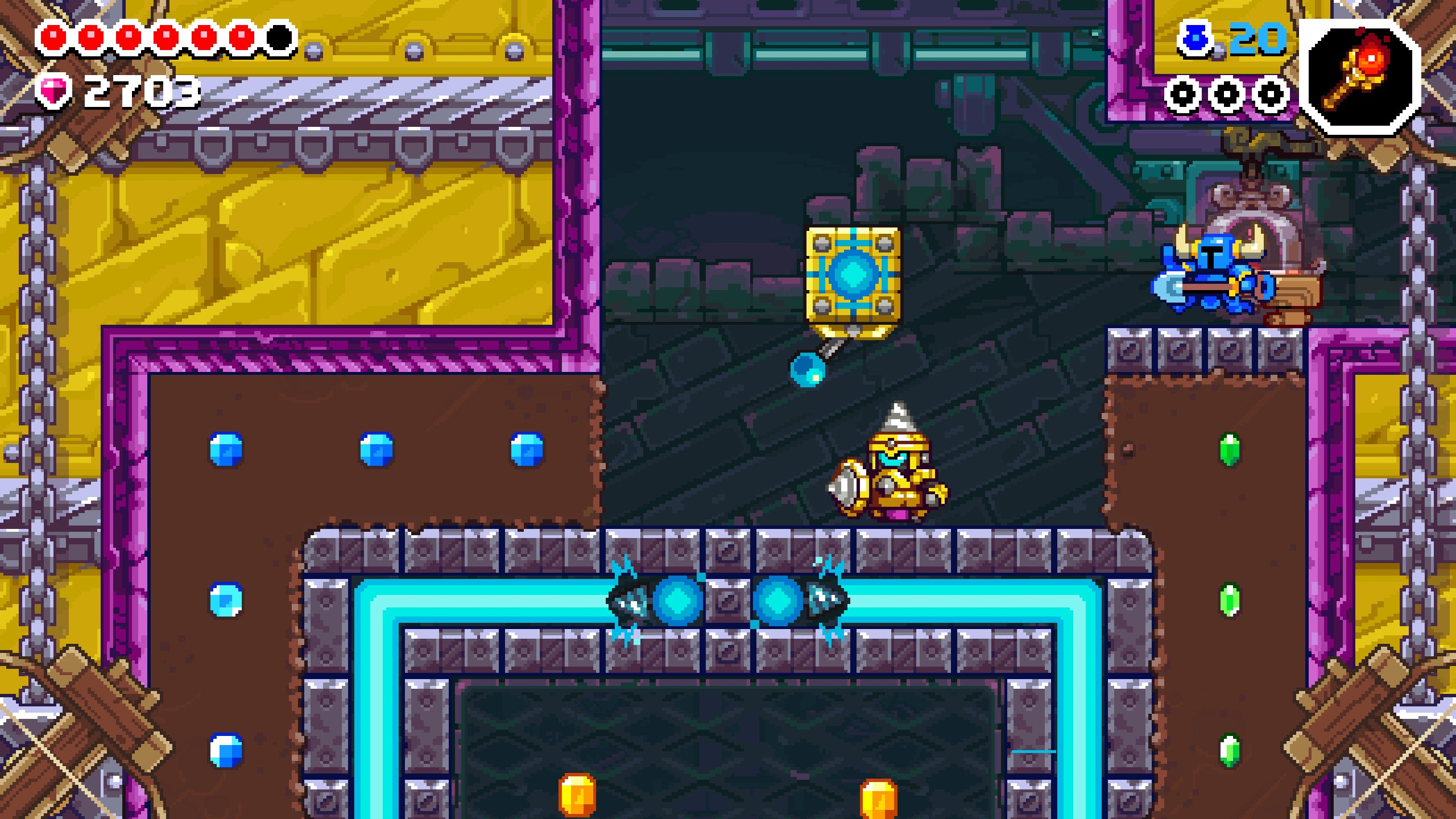 Strong Points: Great music and sprite work; controls just like the original Shovel Knight game
Weak Points: Roguelite mechanics end up being more of an annoyance; true ending is obnoxiously obtuse to get and not worth it; field-of-view is too small
Moral Warnings: Undead skeleton creatures; generic fairytale magic; violence against fantasy creatures

Some accessories are so blatantly broken that they can win a run, while others are completely useless. There is also an armor system where Shovel Knight can equip various armor, but this is also more of a stat enhancement with each armor (besides the default one and one other) having an upside with a downside. I would have preferred if each armor made the game play differently to make up for the absence of playable characters.

While I always felt that the original Shovel Knight entries were good-looking retro-inspired games, Dig greatly improves the visual design with help from developer Nitrome. If the originals were more akin to NES and Genesis/Mega Drive games, Dig would be up there with the best-looking arcade games of the 90s. The graphics are sublime and bring out so much more life into the world of Shovel Knight. The lush colors and immaculate detail bring out some of the best in sprite work. A bit of a shame that the field of view is so small. Not only can you not take in all the visuals, this also affects gameplay, leading to some cheap shots you couldn’t see coming.

Whether you complete a run or perish in the pit, you have the option to return to the village where you can spend your hard-earned gems on various things such as the aforementioned armor and accessory unlocks, as well as shortcuts to later levels. Like in the original Shovel Kight, if you lose, you also get a percentage of the gems collected lost that you can potentially retrieve by playing again. Although since this is a rogelite, losing is much more punishing with any “upgrades” required lost to time (unless under very specific circumstances). You’ll also see a cast of lively characters in this section that walk along usually doing their own thing, adding some extra flair to the world. While there are only a handful of music tracks, the chiptune-based music is very good and I personally never got tired of hearing the tracks. 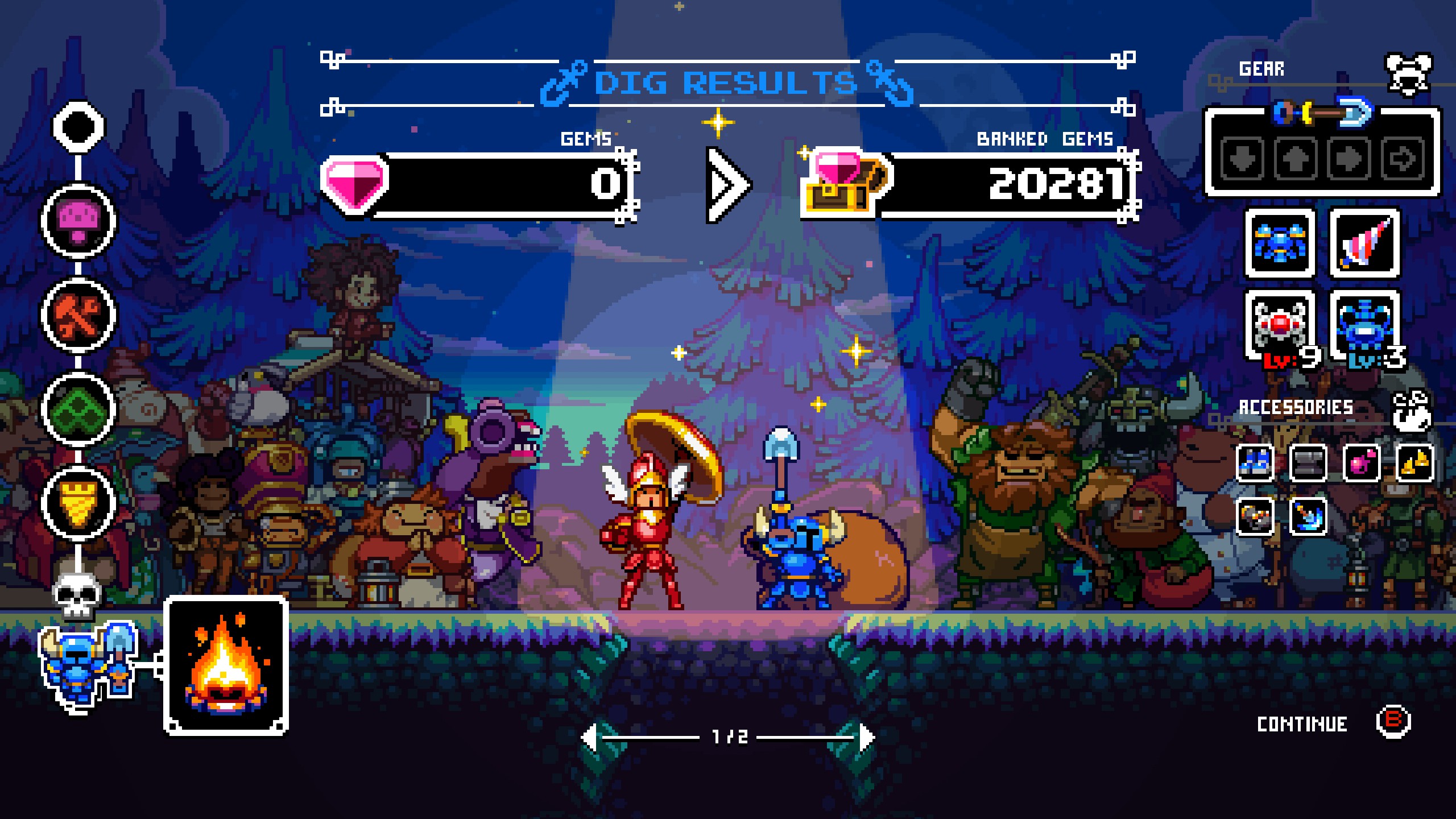 After every three levels, you fight a boss and this is where the roguelite aspect is used best as the boss stage layout is different and can even change up the pattern so it’s more about learning what the bosses can do at any given time instead of pure memorization. Other than this standout application, I also felt that Dig rarely took advantage of its roguelite mechanics. In fact, after completing the game multiple times, I started using Cheat Engine just to get and try out the rest of the armors and accessories and minimize grinding time. Using Cheat Engine for lots of gems to use inside the stages made me realize that I was having a lot more fun with Dig this way than trying to play it traditionally, but I’m not exactly recommending playing this way.

There are about three endings of sorts to Shovel Knight Dig, and while getting the normal ending is pretty simple as it just requires you to beat Drill Knight, the requirements for the secret ending are all kinds of obnoxious and brought out more of the flaws within the gameplay. The requirement of getting the secret ending is a multi-step process in which if you screw up at any point, you have to start a new run no matter how far you get. A good chunk of these steps you also only get one chance to do in the run. After finally getting the secret ending, I didn’t even feel accomplished nor satisfied as the true final boss is more of a spectacle/thematic fight than one that presents a challenge. I guess the challenge was getting to said ending in the first place…

Moral warnings are few. There is some violence involved, namely against fantasy creatures like slimes. Any human or human-like characters are simply KO’d. Some of the enemies you face are undead skeletons, and magic is generally kept fairytale-based with no specific real-life origin or influence.

I’m not too fond of Shovel Knight Dig, mostly because I feel like it doesn’t take advantage of its roguelite mechanics with most of them feeling half-baked. Don’t get me wrong, I don’t think it’s a bad game, but it would have been a lot better if it wasn’t a roguelite. In contrast, the music is great, and the graphics are the best it’s ever been in the series. It’s also just expensive for the amount of content it offers after getting the endings; all you got to do is collect the rest of the items and achievements. A cautious recommendation for Shovel Knight fans that might be best for a sale. However, I did hear that DLC or some additional content is in the works and I’m willing to try it out if it ever comes to fruition.