Thank You JIMMY DIAMOND for submitting this through our Steam Curator!

I’ve played my fair share of weird games, and this one probably takes the cake for me (that isn’t a blatant troll game). Surreal Experience really is something different.

A very strange brand of first-person survival horror. Surreal Experience has a pretty simple goal and premise. You’re a worker employed by Surreal Eradicators LLC. Your job, entrusted by your manager, is to evict the homeless people inside abandoned buildings and environments. The objectives, in order, are to clock in, kick out the ten homeless people, clock out, and leave the building.

But just like in real life, a job can’t be as simple as that. You’ll have certain obstacles in your way. You have your tall and skinny manager who is constantly evaluating your progress. He doesn’t start off as a nuisance, typically humming to himself that he’s the manager, and he's walking around. If you start slacking in the bum-booting process, he’ll reprimand you. Too many times he has to stop you, and he’ll fire you from the job. Not like he does anything himself.

The next guy who impedes your progress is the resident drug addict. He’s looking for crack. He sports a massive smile on his face and dilated pupils. He’ll interrupt your work, asking for drugs and taking up your time. As time goes on, he’ll take up more and more of your time. He’s pretty difficult to avoid with his erratic movements. The other guy is actually cool. He’s just some random friendly dude who plays music for you. All of the NPCs are voiced and they all like to say silly and strange things. 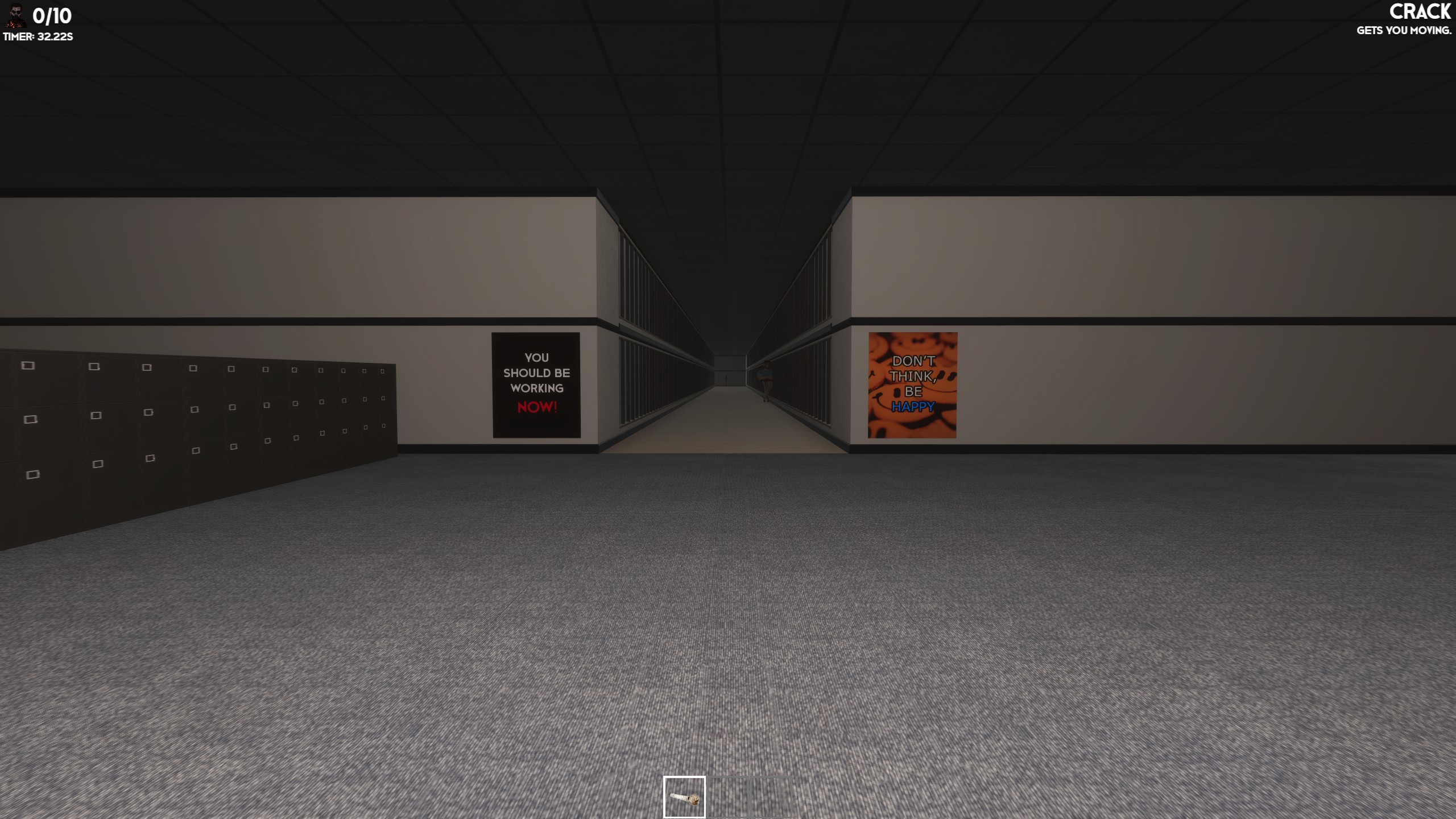 Now, the last and most threatening guy—is the crazy homeless man, also known as Thug or Antagonist. Whereas all the other homeless don’t put up any form of resistance, he does. If he gets you in his hands, it’s game over. In the beginning, he’s a non-threat as he’s extremely slow and is yelling gibberish in an irate manner. The whole thing is funny because of how he doesn’t present a challenge to you in the slightest. But the more homeless you kick out, the more aggressive he becomes. He runs faster and becomes more attentive. Evolving into a stalker. A genuine predator. He’s hungry and you’re the prey. Soon, he’ll start to outrun you, and that once funny gibberish and incoherent nonsense become terrifying as you inch closer to your goal (with some lo-fi beats signaling his approach).

Fortunately, there are methods to help out. You have the space bar to have your character look 180-degrees behind. Items are scattered around such as crack and disguises. Crack can be handed over to the crackhead to get him to stop pestering you or you can also smoke it yourself to speed up movement, allowing you to outrun the homeless man even at his most dangerous. The disguise fools the crazy homeless man temporarily, making him go somewhere else. Hearing aids can also be found, letting you listen in on the other homeless people's locations. After ten seconds, the consumables are used up and disappear from your inventory. The office always has the same layout, but the people inside and the items are in different places for every playthrough.

If you have kenophobia and gatnobphobia, you’ll want to skip this game entirely as the office is all large empty spaces and long hallways. The massive open areas can play on the paranoia as you’ll never know who or what is around that corner. The dimly lit setting and the motivational posters that soon warp into photos of the homeless man play on the fear and absurdity of the situation. Every character is also weird-looking as they all look like cardboard cutouts.

The Sunday school level evolves the concept of Surreal Experience with a somewhat different objective and more variables. This time, you’ve infiltrated a cult disguised as a Sunday school and are made to free all the cult members. Not only is there a different Antagonist roaming the halls, but there is also another NPC that will throw you into Sunday school jail (and strip you of most of your items) if he catches you with drugs on hand. Different to the Office, Sunday School has you free the cult members behind locked doors using keys found around the map. As keys take up an item slot, the item management makes the Sunday school level significantly more difficult. The Antagonist is a little bit slower in movement speed compared to the Office Antagonist to make up for the increased challenge.

Surreal Experience is easy to pick up and runs will go anywhere from one to five minutes. Keep in mind that it is also a difficult time as the few dozen attempts I tried, I only beat each level once. 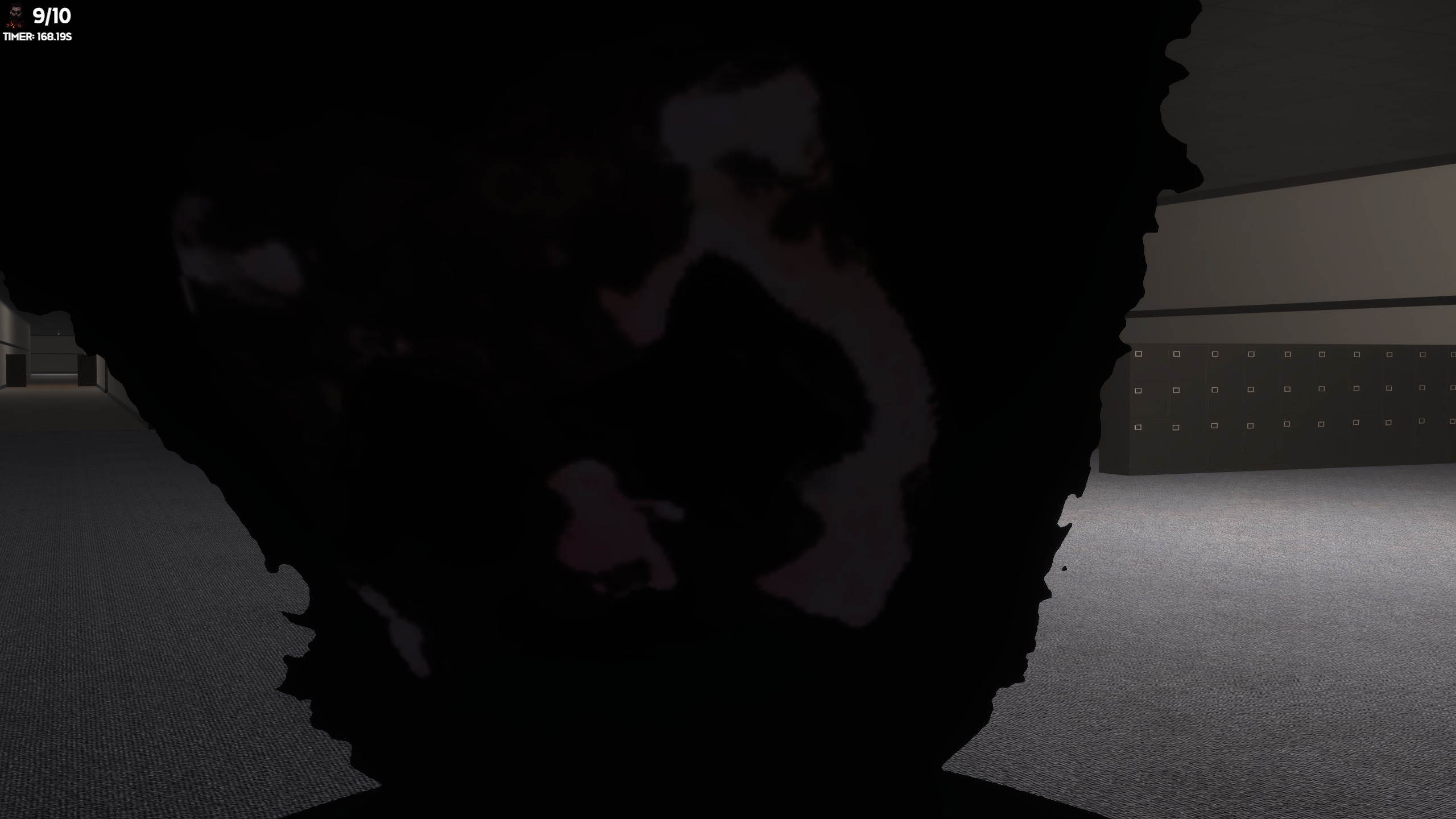 Additional game modes include speedrun or die, hardcore, realistic mode, and sandbox mode. Speedrun or die is a mode where the longer you take, the more NPCs spawn whether it’s the annoying NPCs or Antagonists. In one of my sessions, I had five Thugs running around trying to get me. Hardcore makes the Antagonists faster and the NPCs less tolerant of your presence, while making items scarcer. Realistic mode slows down the game, making for a different kind of difficulty. Last but not least is sandbox mode, letting you change many variables such as the number of NPCs (including antagonists) that are in the levels, their difficulty, and the rarity of items. Unfortunately, sandbox mode is unavailable for the Sunday school level, probably due to the increased variety of mechanics.

Now, moral concerns are not as apparent as you’ll see at first glance. Being captured by the Antagonists are non-violent confrontations. It’ll just close upon their face and boot you to the main menu. You cannot inflict violence onto any character either. But there is an instance of suicide. If you deny the music man’s request, he’ll shoot himself (with an accompanying gunshot) once you leave the office room he’s in. If you walk back into the room, he’ll be dead on the floor with blood on his face. The other aspect is the usage of drugs, namely crack. The usage of crack also has no downside or side effects in its usage, so it can be interpreted as promoting drug usage. In the Sunday school level, there is one F-bomb dropped by one of the NPCs.

Surreal Experience truly is what it says on the tin. It can easily be picked up for a few minutes of fun and the insanity of the situation will entertain some. On the other hand, the dark humor will probably alienate others. The updates from Early Access to its full release fleshed out the game, boosting its replay value. It’s pretty cool that many of my suggestions also made it into the full release. Whether you play it by yourself or have a group of friends watch, this game will be one outlandish escapade.