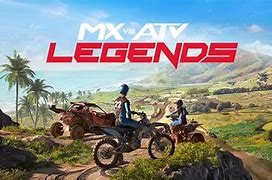 Thank you THQ Nordic for sending us this game to review!

More of the racing games that have been coming across my desk lately have been of the serious simulation types, rather than the lighter-hearted arcade fare. So when I first saw this one, I jumped at the chance to race for fun rather than being forced to perfect my craft. MX vs ATV Legends is part of the long-running MX vs ATV series, which is known for not only the off-road races, but also the crazy stunts you can pull off. This game mostly delivers, but it's not without flaws.

The first time I played, it seemed oddly familiar. My mind immediately went to Monster Jam Steel Titans 2, a game I reviewed last year. First, there is a free-roam mode that has collectibles on it, like this does. The other thing that's really similar is how it handles driving out of bounds; rather than offering an invisible wall, it launches you towards the center of the map at high speed. I later realized that Monster Jam and MX vs ATV are both made by the same people, Rainbow Studios. Then it all made sense!

So while Monster Jam is all about those monster trucks (and aimed at a younger audience, with things like Dog Park), MX vs ATV Legends has the silly physics that allows for some crazy air and tricks, while maintaining a more serious racing theme. But the arcadey, all-for-fun feel of the game is definitely still intact.

The game starts you off with a basic bike (dirt bike), ATV, and UTV. ATVs and UTVs are four-wheeled, with UTVs being much larger. While you can drive around the starting free roam area for a bit, and it can be fun to explore, the game pushes you towards beginning your racing career. It also encourages you to start with bikes, and there's a good reason for that - the ATV and UTV career paths are Much more difficult. Much of the game seems to be balanced around the MX (bike) gameplay. Even after spending extra cash on fully upgrading your starting ATV (or UTV), one single mistake meant last place for me - every time. And yet I can still win most MX races, so I'm not really sure what that's all about, but be ready to ratchet up your skills - even on the lowest difficulty level.

Strong Points: Vehicles are fun to drive; multiplayer and split screen is fun; free roam mode is oddly enjoyable with hidden areas and collectibles; tons and tons of unique races; plays really well on Steam Deck
Weak Points: Motorcyles are significantly easier to do well with than ATVs or UTVs; occasional quirky bugs and lack of polish (though that's been getting better with patches)
Moral Warnings: Vehicular violence, as you can knock other racers off of their bikes, and can also go flying yourself

Thankfully, the MX races have a much more gradual difficulty curve, and also do a great job introducing you to what the game is all about. Scattered about the practice compound are various crew members you can talk to, and they give you various upgrades or encourage you to take certain steps to do the next thing, like taking part in career races.

Once you start going through your career, you start with local races, and earn some money when you do well. You start with a basic 2-stroke bike, and it really helps to put some of that money you earn by racing (and winning) into upgrading various parts, like the engine, clutch, chassis, brakes, and so forth. Each part modifies your Power, Traction, Handling, and other stats that helps your vehicle perform its best. What I found is that if you focus on going for level three (out of three) parts as soon as you can afford them, it really helps you win - and the difference is quite dramatic. Purchasing upgrades took me from a mid-level performer to most often placing in the top three.

There are quite a few track types, and I found that I did best in a couple of different kinds. For example, Supercross and National tracks are both races with laps - and each kind typically has some tricky spots that require a good amount of precision to prevent crashing, which can really mess up your lap times, not to mention let people pass you! Supercross is tiny tracks with lots of turns, while Nationals are larger outdoor courses. These both seem to demand the most practice out of me to do well.

There are just a few Rhythm tracks, which are basically straight lines that test your ability to time jumps and acceleration. If you jump and land incorrectly, it'll slow you down quite a lot, but if you get it right you can fly right past your opponents. It's a fairly simple track type that I had little trouble with.

Trails are probably my favorite track type, along with some of the Invitationals. These are longer tracks that have a defined beginning and end, with typically ten checkpoints in between. Some are quite long, lasting over five minutes. I really like these because you have the distance to really take advantage of any gained speed, and if you do well enough there, you can often gain enough ground to handle any mistakes that lead to crashes. Of course this isn't always the case, but I found this type of track to be my favorite overall and I always look forward to them.

While there is an Exhibition game mode that includes a Quickplay mode, each track must be unlocked by playing Career mode first. So unfortunately, you can't just jump in and check out all of the tracks; you have to proceed to unlock things first, which the game makes you do in MX mode (bikes). If you try to play ATVs or UTVs first, it'll let you, but the Career only allows you to go so far before it says 'proceed further in MX first'. 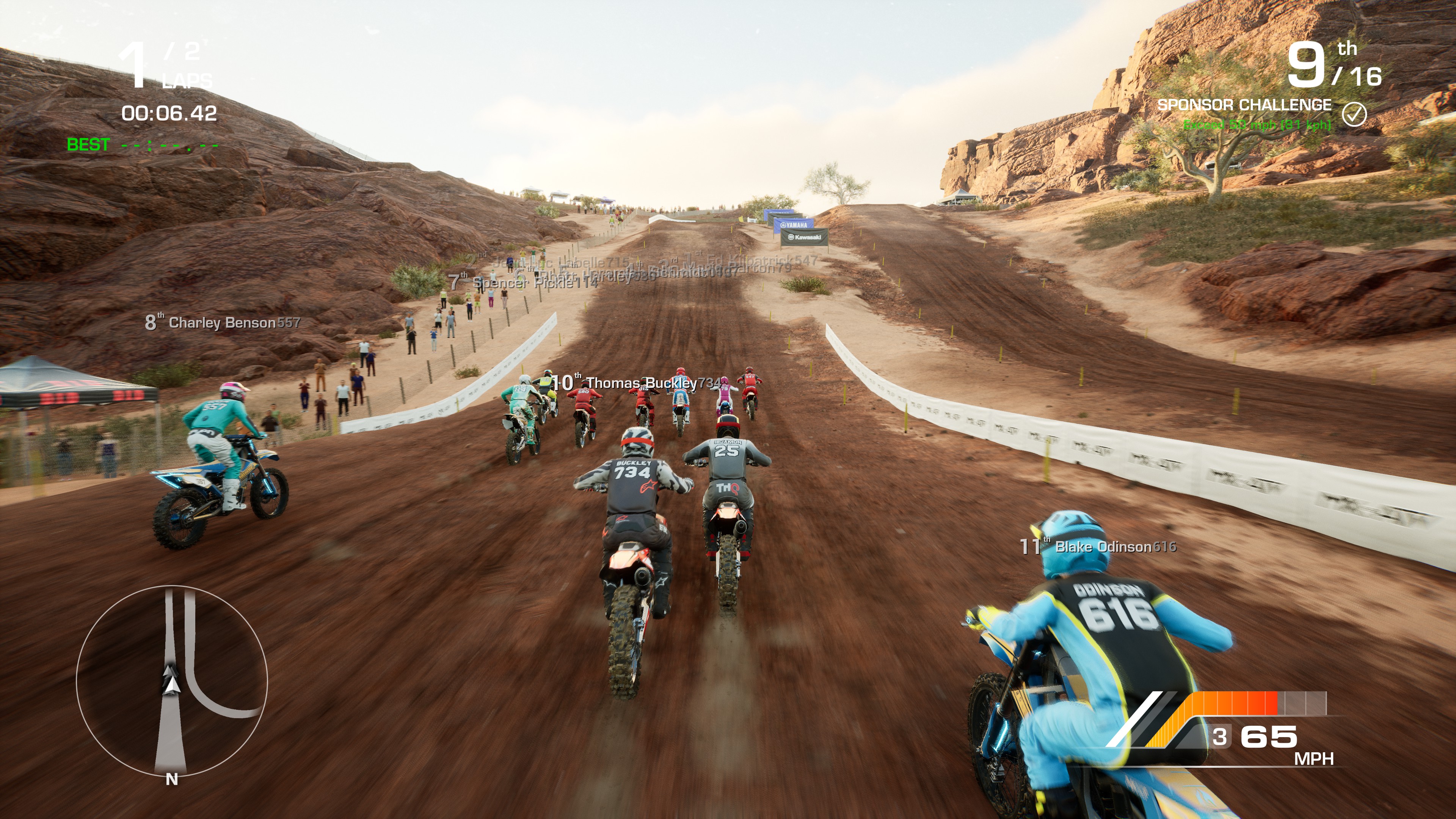 I definitely enjoyed racing with the bikes quite a lot, though many complain that MX mode is generally too easy, and I can understand that, but given the difficulty spike involved in the other modes, I don't think it should be made too much more difficult. While playing, there have been occasional odd bugs and quirks; one time I crashed at just the right place, and got credit for two laps in a few seconds as the respawn after crashing put me right before the lap marker as I crashed right after completing the lap. Another bug that I noticed is that sometimes inputs can get a little confused if you press a button when the game isn't expecting it. For example, when you start a race, one time I had the game say I was going backwards not forwards from the starting line; I thought it might have been just me, but others have had the issue also. Racer animations at the starting line are also janky in general, and there is no countdown to launch, so you don't know when to press on the gas to go typically until the rest of the racers already have. In general, I find that the game plays pretty well, but with quirks and jank that some might find endearing, but I would prefer weren't there.

Graphically, it looks really nice. I mean other racing games can and do look better, but it definitely looks good enough for me. It doesn't seem obviously outdated or anything. The music is a mixed bag based on taste; some is pop or punk, and others are heavy metal (I enjoy metal, but not so much the screaming type that is well represented in-game). Engine sounds are fine as far as I'm concerned, but some players have been complaining about certain model types, and I can understand where they are coming from, as the 250cc bikes do sound a bit different.

Morally it isn't too bad, but some of the lyrics in the music is questionable, with songs like 'girls will be boys and boys will be girls', and mentions of alcohol, and minor curse words like 'h*ll' and 'd*mn'. Of course you can crash your vehicle, and run into others to crash them, as well. Otherwise, there isn't too much to worry about.

MX vs ATV Legends is honestly a lot of fun, but it's also a bit rough around the edges. Thankfully, there have already been nine patches since release, and so I believe that Rainbow Studios and THQ Nordic will keep patching it to make things better. There is quite a lot of DLC that can easily cost more than the game's purchase price, which can understandably upset a lot of gamers. On the plus side, there is plenty of content out of the box, and it runs great even on Steam Deck, where I've put probably over half of my play time. I'm not certain if it plays all of the cut scenes (there aren't many, but a few I've noticed) on Deck, but races themselves work wonderfully. MX vs ATV Legends is honestly quite fun to play despite its flaws, and I would definitely encourage you to take a closer look if you think it's something you would enjoy.