Thank you Degica for sending us this game to review!

As one of my last reviews written in 2021, I noticed that I've reviewed a whole lot of shoot 'em ups this year, perhaps more than any other. I've played horizontal shooters, vertical, classic and modern - I've touched on many kinds. And yet, because of a combination of carefully handing out more credits and the many bits of dialogue, I've probably played more of this one than any other.

Castle of Shikigami 2 was a 2003 follow-up to the original 2001 release of Castle of Shikigami. Both games started in the arcades, and eventually came to home consoles and Windows PCs of the time. Degica re-localized and updated them for modern Windows PCs via Steam. They did the first game back in 2017, and now the second one in 2021.

These games fall into the genre of shoot 'em up I like to call 'bullet heck', or 'danmaku' in Japanese. In this one, you move your character around the screen, shooting from the bottom of the screen towards enemies coming at you from the top. While all shoot 'em ups boil down to shooting down enemies while avoiding enemy fire, this one places much more focus on avoidance - the screen is often filled with slow-moving bullets to evade, and much of the challenge is dodging and weaving through massive lines of bullets of different shapes and sizes. These waves of shots get progressively more and more challenging as the game goes on, but rarely feels unfair. I was quite impressed by the balance as I played more and more.

To make it a little bit easier, the game allows you to enable a slow down mode. In the original arcade hardware, if there were too many things on the screen at once, the game would slow down because the hardware was being taxed. In this case, enabling that option helps the player because they have a bit more time to react to the chaos on screen, and this happens to simulate the original as well.

Outside of slow mode, there isn’t a ton of handholding, though there is an easy mode – with a catch. If you play on easy mode, you can’t go past the third level, or level 3-2. If you want to see the whole game, you have to play on normal (or harder). Difficulty levels include Easy, Normal, and Extreme. These are then available in the three different modes: Arcade, Dramatic Change, and New Entry. There is also a Practice mode where you can choose where to start, up to level 3-2 (at least that’s what I have unlocked – I’m not sure how to get more). You can play your unlocked levels without worrying about dying, and you can use bombs as you like.

Speaking of bombs, each character has three types of attacks. First is their main weapon, which shoots ahead of them at a fast pace. Each character’s attack shoots using a slightly different pattern, width, or some other aspect that makes it unique. There is also a 'glance' mechanic, where if your character is very close to an enemy bullet, your attack power goes up - as does the score multiplier. The second weapon type is their Shikigami – this is a special spirit power that is activated by holding the regular fire button (not to be confused with the repeat fire button). These actions vary widely by character, but are often quite powerful. They also usually slow down your movement as a tradeoff against their power. And lastly, each character has a bomb-like attack with limited ammunition. These always clear the screen of bullets, and not only can it save you from death, but do good damage as well.

There are seven playable characters, each with their own unique attacks and storyline. Kohtarou Kuga is the main protagonist, and is a young private investigator. The other male characters are friends of his in some way, and let’s just say that he also attracts the eye of females as well. The rest are Sayo Yuhki, Gennojo Hyuga, Fumiko Odette Vanstein, Kim De John, Niigi G.B., and Roger Sasuke. All of them play differently enough that some strategies may need adjustment. Some are better at clearing enemies, while others are better at some bosses, for example. While there are only ten levels, I found replaying the game repeatedly to not get boring in large part because of the characters. 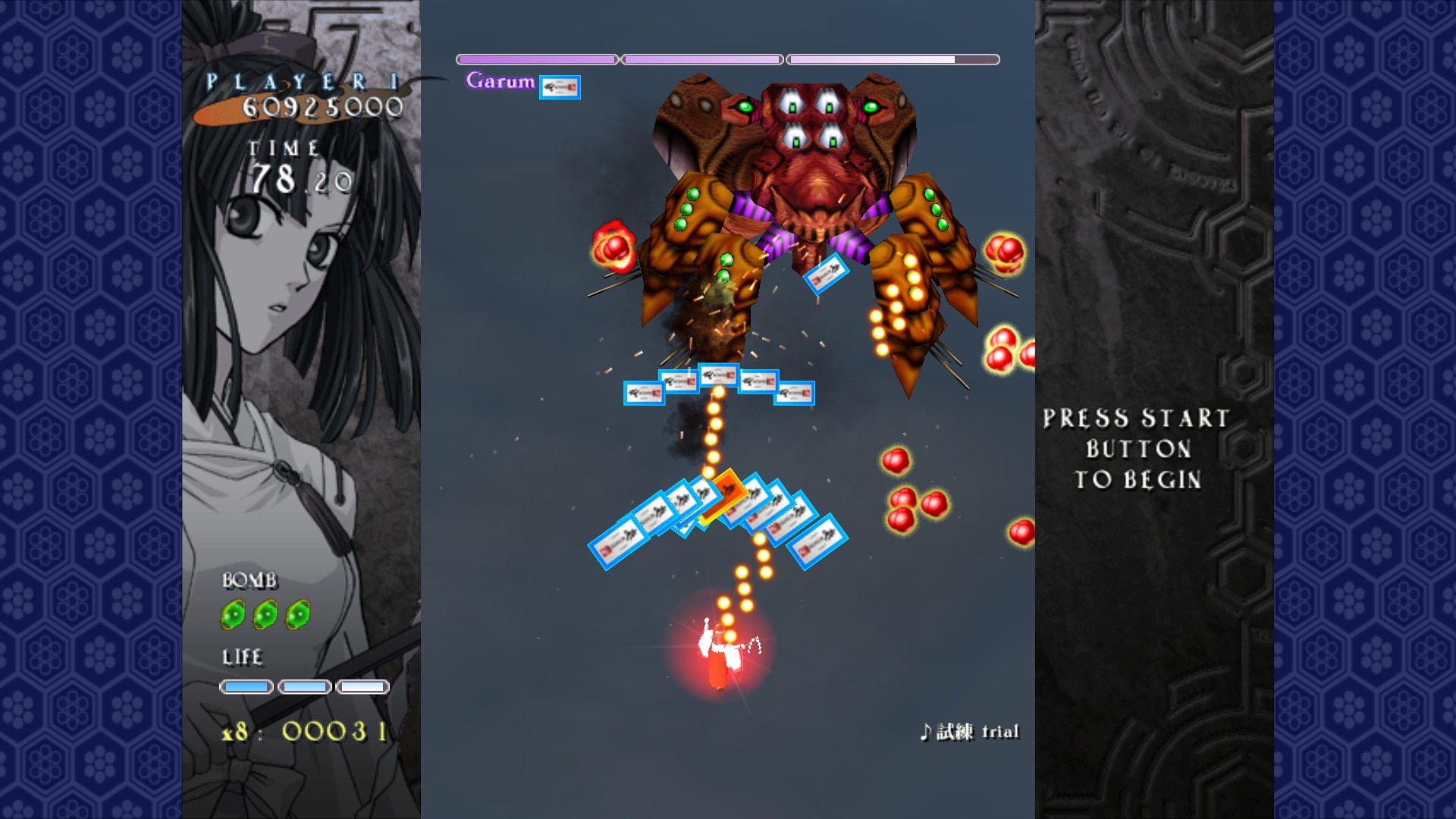 In between levels and during some boss battles, there is spoken dialogue (in Japanese with English subtitles) that helps you get to know each character better. Some characters, like Fumiko, love to tease (or are in love with) Kohtarou, and the conversations reflect that. If you have two players, they can converse with each other, and if not, you can play the ‘Dramatic Change’ mode, which allows you to choose two characters at once, and switch between them with a button press. Each combination of characters has different dialogue, and there are a ton of quips to uncover, which also encourages replays. While some conversations can border on suggestive in nature, most are fun and add flavor to repeat playthroughs. The translation quality is overall good, though I did find occasionally odd sentence breaks or cut off statements. I hope they fix them, as I know they are actively patching the game still.

Outside of the occasional suggestive bits of dialogue, violence is obviously present, and enemies do die when killed. There is talk that people can come back in future lives, which suggests reincarnation. Some of those same enemies were brought back from previous deaths to fight you. Shikigamis are magical spirit powers that the player characters wield. There is also some mild language like 'd*mn' and 'h*ll' present.

Castle of Shikigami 2 is a really well put together shoot ‘em up that has a loyal following, and for good reason. The graphics aren’t the most modern, though the music is solid and makes up for it. You should be able to run this on any reasonably modern computer; it ran wonderfully on a laptop with Intel integrated graphics. It also works flawlessly via Steam Proton, for our Linux-enabled brethren. In my time with the game, I found myself stealing a quick runthrough at odd times, and going to bed later than planned. I found the level and character balance remarkable; as you play, you earn and unlock additional credits, one per hour of play, until you unlock free play. The funny thing is, my first time beating the game coincided, purely by luck, with the unlocking of free play – so I can safely say I beat the game the first time without cheating via infinite lives.

If you like shoot ‘em ups, then I highly recommend Castle of Shikigami 2. It’s expertly balanced, really challenging, and if the normal mode isn’t hard enough, there is extreme and the crazy New Entry mode to really keep things intense. There are also online leaderboards if that’s your thing. Highly recommended for fans of the genre.