I'd like to thank Snowrunner Games for the review key to this title.

Now, I know what you are thinking, and even I recoiled a little when I got the review key for this blind. My boss thought this would be a hilarious game for someone to review. I have to admit, now that I've played it, that Retired Men's Nude Beach Volleyball League is both not as cringe as I thought and a pretty funny game.

The game puts you in the shoes of Len, an 80-year-old retiree in Worcester, Massachusetts. Len stumbled across an ad for a volleyball league and despite the weird twist everyone plays naked, he decided "why not, let's give it try." With this, a strange adventure involving old men playing volleyball naked, worrying about mundane things in life, lots of calls for macaroni salad, and a perfect storm of weird meets mundane begins.

The game is split into two segments. The visual novel style segments involve Len going over the events he's experienced in his life both past and present. The other half is his volleyball games for the new league he has joined. If you just want to skip Len reminiscing and worrying about whatever crosses his mind, the devs included an option to skip most of the visual novel segments if you wish. 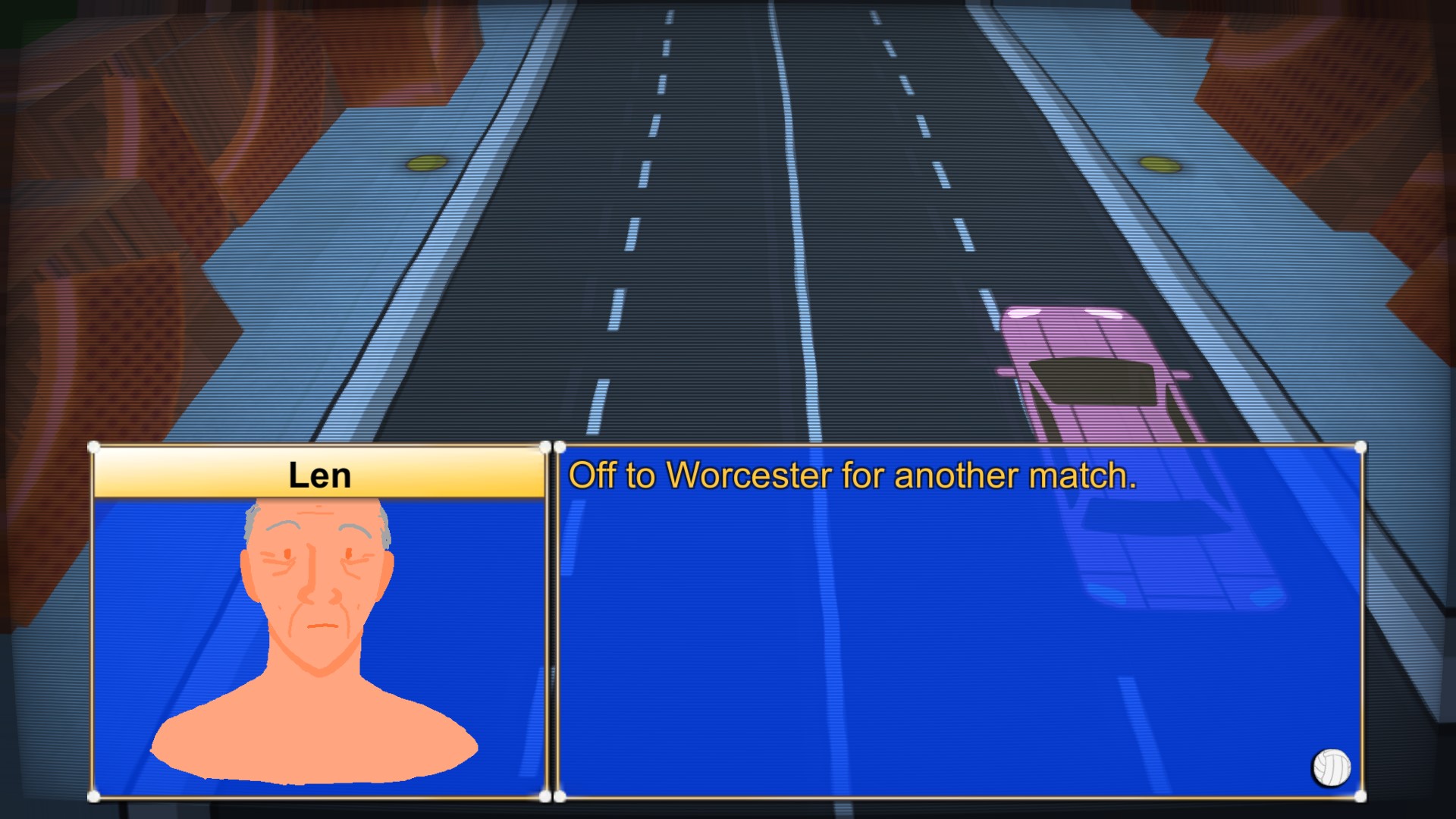 This is not an overly long game, especially if you skip most of the reading sequences. According to the devs, you can beat it in well under an afternoon, and I found it a fairly quick game myself. You can try to challenge yourself at the fairly challenging volleyball segments, but winning or losing is not nearly as important as progress.

I also want to make note of something. There are some minor grammatical and spelling errors, but according to the developer, this is intentional. There is a very neat twist to the game I don't want to spoil, but the only hint I'll give is to try exiting the game via the main menu "EXIT" option and look around at what you find, it should make a lot of things make a lot more sense. It may even change everything you first thought about the game premise.

Graphically, the game purposely has a crude style, resembling an Atari 7800 game (especially during the volleyball sequences) and the visual novel sequences all have this hand-drawn look like they were drawn and colored by an amateur artist. The aesthetic works, adding a touch kitschy retro to the weird theme. It also ties into the twist why it looks this way.

The controls are very simple. You can use either a PC controller or the keyboard, and both involve using the directional controls and Enter/Action keys for the most part in the volleyball sequences. The visual novel sequences are much the same, only the controls are used for selecting choices in these scenes. 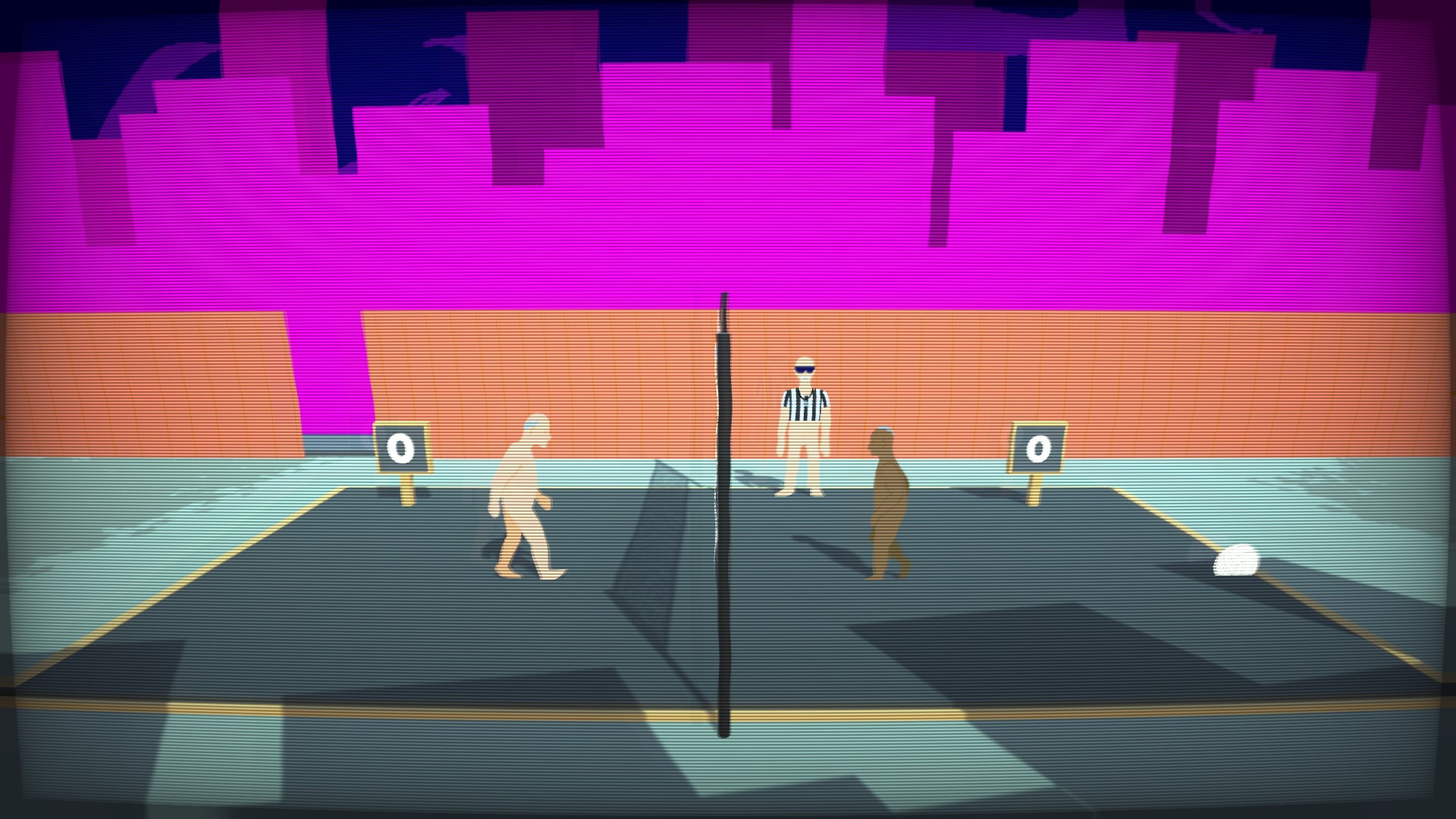 Stability is somewhat okay, save for a few things. While it takes a bit to load, it runs fine in Windows once it finishes. I tried running it in Linux via Steam Proton but was unable to get past the opening logos. There are issues with the game exit screen (via the ESC key) not working, forcing an ALT+F4 shutdown, but the developer has promised a patch for this issue. The game also is not fond of switching to other applications at any point, often causing the controls to have issues responding if you do.

Morally, despite the title, this isn't too bad.

Some mild, PG-13 language is present, like h*ll, d*mn, and b*stard, but that's about it. The nudity is of the featureless paper doll style, and aside from very brief scenes where you see the character disrobing (that cuts before anything is shown), it's fairly tame.

This is set in a realistic (if played for weird humor) setting, so no supernatural or occult themes to be concerned about. Morally and ethically, this is pretty tame, as the nude volleyball playing is of the entirely voluntary type, much like there are real-world nude beaches, and the volleyball is expected to be played within some rules that are clearly defined before you play.

As a game, it's retro and kinda short, but for the price, it makes for a very amusing gag gift game that will make you laugh. The technical stuff, however, really needs some fixes. The volleyball aspect is surprisingly well done despite this and it may be worth replaying for that and to see all the different dialogue variations. Morally, aside from the concerns mentioned above, I'd not be afraid to let any teenager on up give this title a whirl.