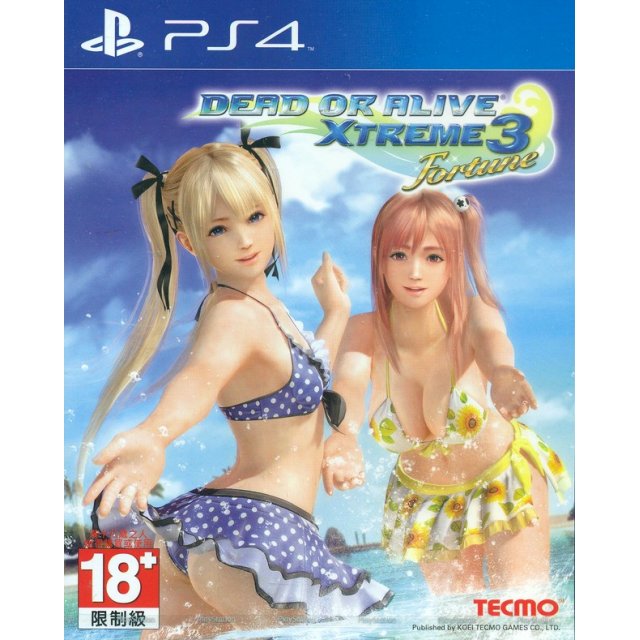 (Buy it at Play-Asia.com)
Game Info:

Thank you Play-Asia for sending us this game to review!

After the failure of previous island resorts, New Zack Island is ready for entertaining attractive young ladies for a couple of weeks.  Since the proprietor has other business to attend to, the island and its beautiful inhabitants are in your care.  As the owner, it’s your job to shower the women with gifts they’ll enjoy and to make their dream vacation a reality.  In return you’re allowed to take racy pictures of them relaxing (and practically touching themselves!) or playing one of the six mini-games available on this tropical island.

The default story mode lasts fourteen days with the option of leaving earlier if you desire.  Each day allows the girl of your choosing to do a couple of activities before heading back to the hotel to play at the casino or to go to bed for the night.  There are nine girls to choose from and they each have a preference in food, hobbies, and a favorite color.  Be sure to jot down their interests for future gift giving ideas!  Their measurements are included as well.  While most of the girls are in their teens or twenties, I played as the angelic one that’s over a thousand years old. (She looked very good for her age!)

Once on the beach, the character will be approached by the others to form a team.  Many activities can be played solo, but teams are required for some of them.  If you’re not happy with your partner you can dissolve your partnership by sleeping in the following day. 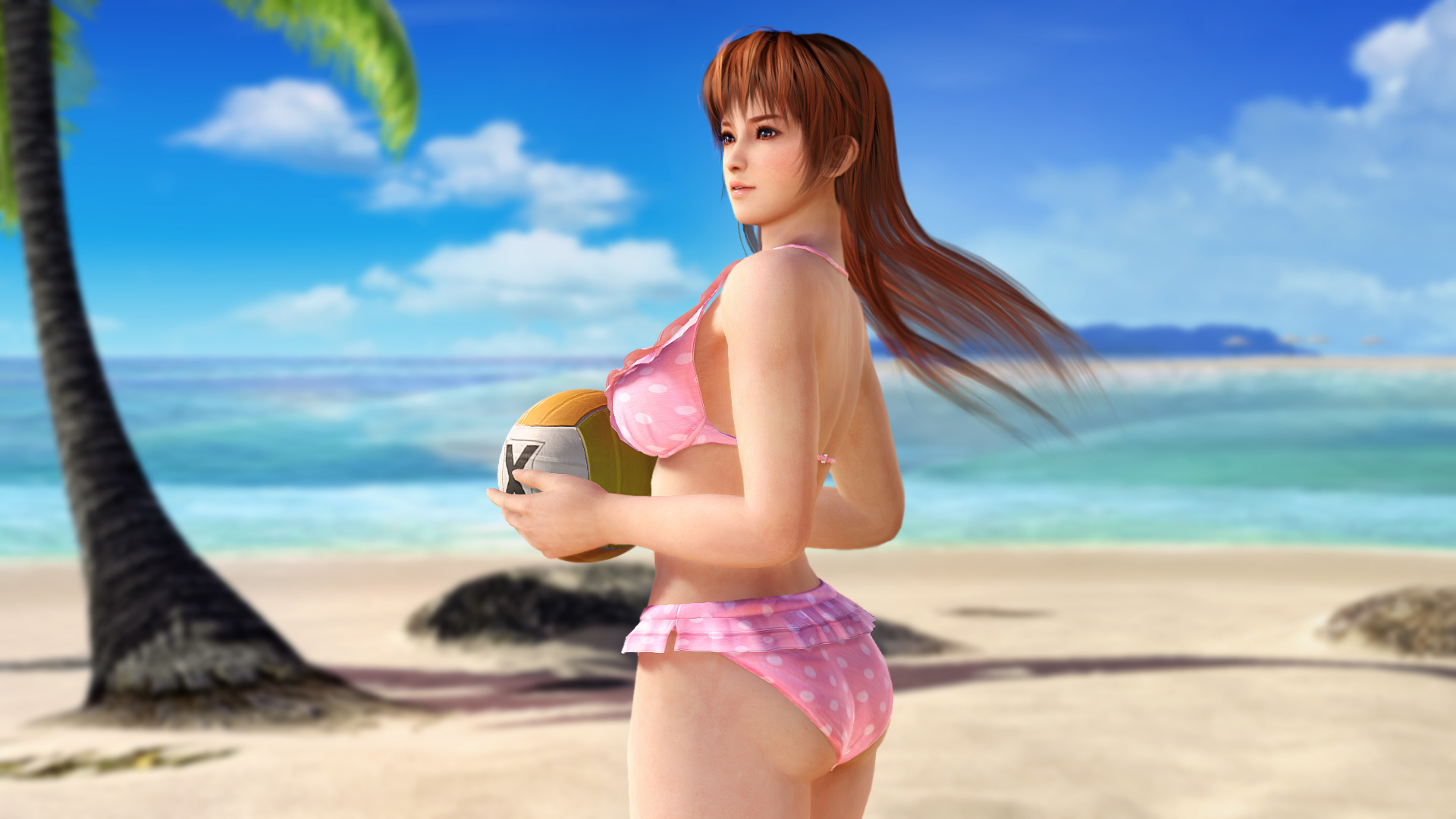 Strong Points: A decent variety of mini-games to choose from and winning the hearts of the girls adds an additional challenge; fun casino games in you’re into virtual gambling with racy playing cards
Weak Points: Short and shallow single player campaign can be beaten in a couple of hours, though there’s plenty of replay-ability if you want to win over all of the women; circle button is the default button instead of X
Moral Warnings: Lots of attractive and often well-endowed young women wearing skimpy bikinis; besides the gratuitous chest and butt shots, these women get pretty close to touching themselves inappropriately in public when they’re relaxing; gambling

Money can be earned by completing activities, winning at the casino, or by completing mission objectives.  Random goals will be assigned like playing a particular activity or by winning a certain number of times and so on.  Money earned in this game can be used to buy gifts to send to girls to increase their closeness rating or satisfaction rating if sending gifts as the owner.  There’s a wide variety of gifts available ranging from musical instruments to books and food.  If you purchase food, be sure to gift it right away since it can melt or go bad.  If you’re not happy with your girl’s current swim suit, you can buy different styled and colored ones.  True to this series’ reputation, there are some pretty revealing suits available for purchase.

With the plentiful views of cleavage and butts, I was curious what this game offered in terms of content.  There are six mini-games and three casino games (blackjack, poker, roulette).  Here’s a breakdown of each mini-game:

Beach Flags – Race to the flag and be the first to dive for and grab it.  Don’t start too early or you’ll be disqualified.

Beach Volleyball – Two teams of two battle against each other to be the first to reach eleven points.

Butt Battle – Each girl is on their own circular platform and they must knock off the other using their butt.

Pool Hopping – Numerous platforms with button symbols are floating at different distances.  You either have to do short or long jumps and hitting the button with a matching symbol adds more points.  This mini-game is timed.

Rock Climbing – In order to make it to the top you have to press the proper button when prompted.

Tug of War – Either pull or feint to trick your opponent and make them lose their balance.  The first to get knocked off three times, loses. 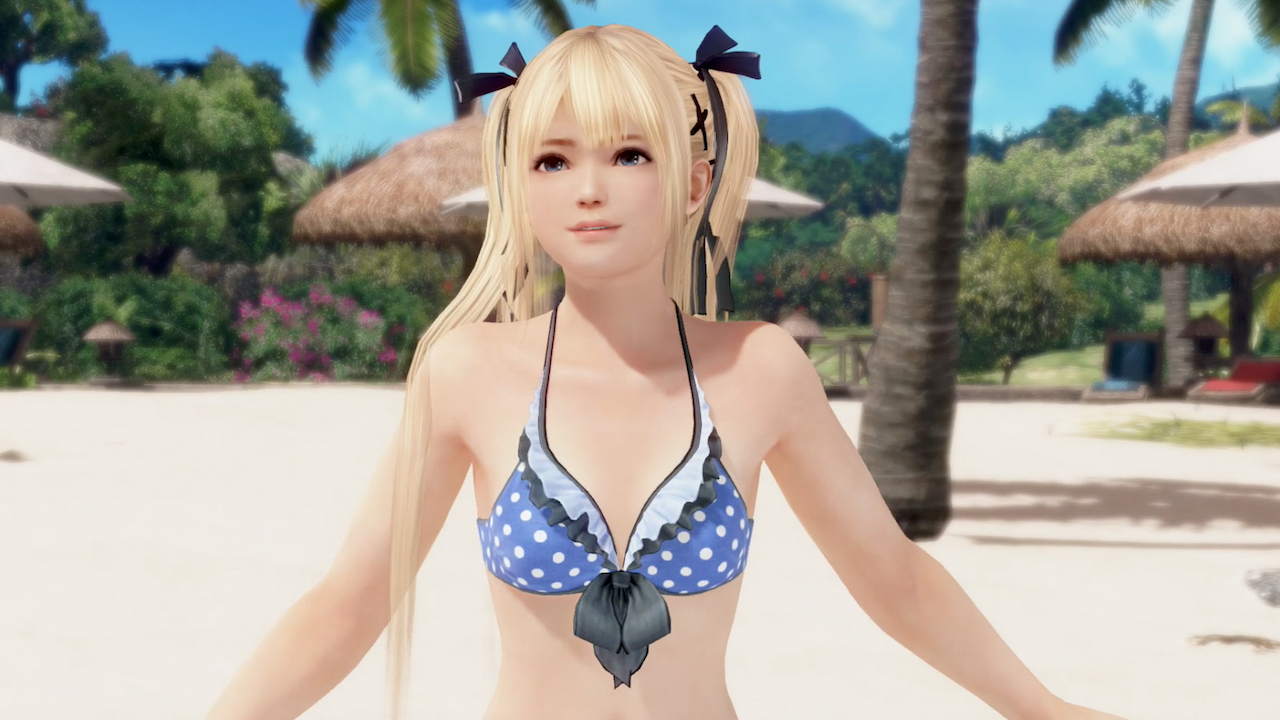 In all honesty, I found the mini-games fun and replayed a few of them to better my score or overall performance in them.  Though the fan service in them is quite distracting. It makes me wonder how successful these games would be if the women were wearing street clothes instead of bikinis.

Visually this game is very pretty with the relaxing environment and knockout gorgeous women.  The breast physics work and the animations used are alluring and often seductive.  If you’re struggling with lust or pornography, this game should be avoided.

The background music is sung in English and is romantic and relaxing.  The girls all speak in Japanese though.  Subtitles are provided for English speaking players.

The retail price is $60 and given the short and shallow gameplay I have a hard time recommending this game.  If you want to gamble or look at pretty women playing silly water sports with barely anything on, then Dead or Alive Xtreme 3: Fortune will deliver in spades.