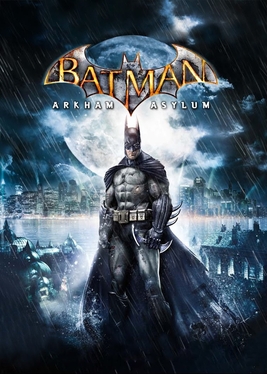 With comic book hero games having a relatively poor reputation and with Batman games having a history of hit or miss titles, Batman: Arkham Asylum is a definite gamble that has paid off tremendously. The player takes on the role of Batman, having just captured the Joker once agan and has returned him to Arkham Asylum, a brooding, gothic set of buildings built on an island adjacent to Gotham City which has been home to all of Batman\'s major enemies at one time or another. Batman is concerned that capturing Joker this time was too easy, and only too late does it become clear that Joker has been planning this for some time.

The story is linear, beginning with a cinematic of Batman returning Joker to the asylum in his Batmobile. The opening credits are shown as Batman follows Joker into the depths of the facility. The action begins with Joker\'s breaking free from the guards and entering the secured parts of the Asylum, which are already under his control. This has been accomplished thanks to several thugs that have "conveniently" been housed at Arkham following a mysterious fire at Blackgate Prison. Harley Quinn has secretly taken control of much of the Asylum and everything is already in place when Joker arrives. It is now up to Batman to retake the asylum and get Joker and his cronies back under control.

One of the strengths of the story is that it preserves the "classic" elements that have defined Batman over the years. (Except Robin. There is no Robin in this game.) One of those classic elements is the utility belt. Initially, Batman only has batarangs and the grapple gun. As the story progresses, Batman gains access to more and more special gadgets to aid him in reaching areas that would otherwise be inaccessible. In fact, even though the story is linear, Batman is free to return to many areas of the asylum to use his new gadgets to reach places and find secrets that he couldn\'t reach before. This improves the replay value as well as giving the player areas to explore that may have been skipped during the campaign. One very nice feature is that even after the story has been completed the player can resume play to pick up missed goodies.

Another classic Batman element is the variety of stealthy ways Batman can incapacitate his enemies. He can pounce on them from around corners, sneak up on them, grab them while hanging above them or jump out from floor grates. There are several special moves available, and part of the fun of the game is discovering them. This encourages the player to avoid open combat as much as possible and rely on stealth. In fact, in some maps it is absolutely essential that Batman use stealth, as he cannot withstand enemy gunfire for more than a few seconds, so direct confrontation against numerous enemies is not an option.

Typically once Batman has gotten hold of an enemy, he uses a sleeper hold to render him unconscious, or leaves him hagning upside down from a zip wire.

Batman\'s health meter is a circular ring in the upper right corner of the screen. There are no health regenerating items in the game, but Batman\'s health is replenished by earning experience. This is accomplished by completing objectives, defeating enemies in combat, finding secrets and destroying the little chattering teeth with his batarangs. (These chattering teeth are not a threat to Batman and seem to exist only for this purpose. They skitter around the floor in almost every room of the Asylum.) Batman\'s experience is recorded in a smaller ring within the health meter, and each time the ring completely fills in, Batman can select an upgrade to his combat ability, armor or improvements to his equipment.

This game is also chock full of secrets to find and riddles to solve. While not appearing directly in the game, the Riddler gives Batman riddles to solve as he progresses through the game. The riddles don\'t need to be solved in order to complete the game, but solving them does award experience points. There are also "Riddler Trophies" hidden all over the game, which also give experience. "Patient Interview" tapes are located around the map, telling some of the story of several of the villain characters. Each has a set of five tapes that play in order as they\'re found. Finally, the story of Arhkam Asylum\'s founder can be revealed by locating stone tablets with script Batman can analyze and read.

Unlocking secrets rewards the player with experience, new challenges, character trophies and character profiles accessible in the game. The profiles are similar to trading cards that tell the story and characteristics of each character, as well as the first Comic Book/Movie/Game appearance of that character. Character Trophies are like miniature models of each character that appears in the game and can be viewed from any angle, as well as having a zoom feature.

There is no multiplayer mode, but players can compare their skills against others by playing in Challenges, which are single room fights with Joker\'s goons that go several rounds, each round getting progressively more difficult. Players are scored on their speed, damage inflicted, use of special moves, and avoiding damage. Some Challenges are purely combat in nature while others focus on Batman\'s stealth abilities.

Once the campaign mode is completed the player has access to a specially armored version of Batman for use in Challenges.

Each challenge, once complete, is scored and the player\'s ranking in that score is compared with other players worldwide.

As an additional visual cue of Batman\'s exertions, his costume sustains wear and tear over the course of the story, in the form of rips and tears.

The sound is crisp and great attention has been given to authenticity. An added bonus for fans of the Batman Animated TV series is that the voices of Joker, Batman and Harley Quinn are the same in the game. The dialog between characters is easy to understand and follow, although there are optional subtitles just in case.

Overall the game was very stable, with only two incidents noticed in the XBox360 version. At one point as Batman was entering a ventilation duct, the game froze solid and had to be switched off and on again. The error did not happen again. In another area of the game, Batman dropped down onto a pile of debris and became stuck, unable to move out of the object. The game had to be resumed from the previous save point.

The controls are simple, with the basic expected range of movement and camera control being handled by the two sticks. Batman can crouch to move in stealth or hide as well as sprint. Most of his other abilities are context driven. For example, if Batman needs to jump across a pit, the player need only have Batman run toward it, and he will automatically jump. if the distance is too wide to successfully jump across, Batman will instead puff out his cape and glide safely to the ground. The same button that controls this action also will cause Batmant to jump up to a ledge if he\'s against the wall and there\'s one he can reach.

In combat, the controls retain their simplicity for the most part. Only one button is needed to attack, and Batman will execute a variety of moves depending on exactly how he\'s fighting. Other controls allow Batman to counter incoming attacks, use his cape to stun enemies, or tumble over them to get behind them. Batman can also dodge incoming projectiles or large enemies as well as throw batarangs.

Some combat upgrades are available that allow Batman to use special moves, and are enabled for each fight once he has successfully completed combination attacks. (Combinations are a series of successful attacks without being hit or standing still in the meantime.) These are usable by pressing button combinations which are displayed on the screen when they\'re available for use.

Maps, objectives, progress and special goodies are all accessible in a fairly basic yet useful interface that pauses the game when accessed. The maps aren\'t always completely clear but objectives are marked so the player will know where to go next.

The centerpiece of the game\'s interface is "Detective Mode," which represents lenses that slip down over Batman\'s eyes to give additional information about a room, like breakable walls, gargoyles that Batman can swing from or hide on, removable vent covers and people, differentiating between armed and unarmed foes. Detective mode will show enemies through walls, enabling Batman to anticipate enemy movements and set up traps for them. The entire game could conceivably be played in this mode, if the player desires. Detective mode also displays the armaments (if any) carried by enemies as well as their current status (calm, nervous, terrified, unconscious, deceased.) The status indicator also works on allies.

This is a game heavy on combat, almost all of which is hand to hand fighting. Batman uses punches, kicks, throws and sometimes his own enemies to attack. In a few cases, enemies are seen murdering Arhkam personnel, and Batman encounters a great many deceased personnel as he makes his way through the embattled asylum.

Batman himself sustains damage over the course of the adventure, not only to his clothing but small bleeding cuts are visible on his face by the end. The Dark Knight takes a beating and it shows.

The language in this game is mild compared to the other elements, but still not appropriate for kids. Expect the usual PG rated language. No F-bombs or S-words were noticed, although Joker\'s goons often swear when threatening Batman or other characters.

While there\'s no sexual behavior as such in this game, the female characters make no pretense of dressing modestly. Poison Ivy, who was always a character depicted as having strong sensuality, wears very little in this game. Indeed, it borders on slipping the game\'s rating from \'T\' to \'M\' but for a few close fitting leaves.

None really. While some of the villains have powers and abilities that are arguably supernatural, it\'s always within the context of mutation or science gone mad, so it does not promote any supernatural activity. Certain parts of the game that feature Batman battling against Scarecrow while suffering the effects of Scarecrow\'s hallucination-producing gas can be fairly disturbing, and portray some supernatural imagery.

This version of Batman is consistent with one of the classic ideals that define the character: Batman absolutely will not kill. This point is reinforced in the story when, at one point, Joker offers himself, completely vulnerable, where Batman may kill him and thus rid himself of this arch enemy. Batman draws a batarang as if to strike, but holds back. The game takes this a step further to reinforce this when, after a fight with Batman, the fallen enemies are visibly still breathing. Their status is also "unconscious" when scanned in Detective Mode. The only deceased characters in the game were killed by the Joker or his thugs. When it\'s possible to cause enemies to fall down a pit, an audible splash can be heard seconds later, assuring us that the villain hasn\'t died. Batman even saves the life of one of Joker\'s goons in the story mode (and immediately incapacitates him with a punch)!

This Batman will not kill. Period.

Batman works closely with the staff at Arkham during the adventure, exhibiting a respect for authority as well as life.

This game is definitely not for the little kids, and even though it\'s rated \'T\', some of the content may still be a cause for concern for the parents of younger teenagers. The game itself is very well crafted with lots to do and holds decent replay value. Batman fans will not be disappointed.