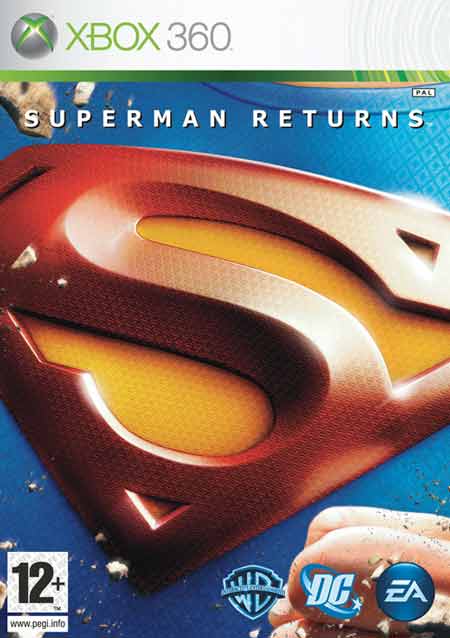 I am completely dumbfounded. For once in my life, I can’t find a single good thing about a game, and I’ve played some horrible games. I’ve always been able to find some good in them, whether it was a good concept, or the sheer absurdness. But the only way I managed to sit through this title was because halfway through I discovered some rather bizarre cheats.

I don’t blame EA Tiburon for this game though; they did the best with the time they had. Movie tie-in games have notoriously short development times, as the games are shoved out the door early in order to cash in on the popularity of the movie. I think that halfway through development, EA Tiburon realized their game was bad, and decided they needed to do something to spice it up. They thought about the cheat system they had already implemented into the game, and decided to add a few off the wall cheats. Things like turning Superman into a phone booth, speeding up traffic to ridiculous levels, or even making Metropolis indestructible.

Have you ever played a game with an escort mission? You know, that one mission that all games have where you must protect someone, or something, from all the enemies and hazards in the level? This entire game is that mission. The gameplay in Superman Returns revolves around protecting the city of Metropolis from *deep breath* dragons, mutant rats and amphibians, fires, robots, aliens, and tornados. Instead of Superman having a health bar, the city does. If the city becomes too panicked, too many people get hurt, or too many problems are left unresolved the city is “devastated” and you have to start over. I understand that Superman is invincible, and there needs to be some kind of health bar, but this isn’t the way to do it. It felt like I was the most powerful being alive, but I was stuck babysitting a city that can’t do anything for itself. Whether it was fighting dragons or putting out fires, I had to be careful what I destroyed. This may make sense in comics, but it’s just a bad idea in videogames. 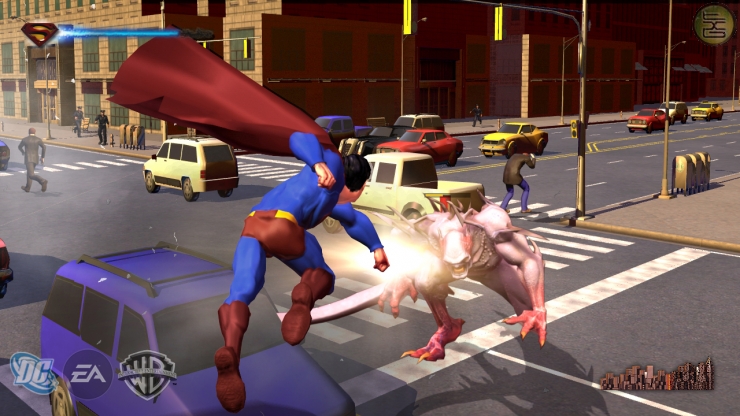 In order to protect Metropolis, Superman is able to use his usual repertoire of powers: super strength, super and freeze breath, heat and x-ray vision, invulnerability, and even super sonic flight. Although most of the abilities are represented well, I was disappointed with the x-ray vision. Instead of activating it, it is a passive ability that simply allows you to see through objects you are carrying. It would have been nice to see this ability better utilized, perhaps like the detective vision from Batman: Arkham Asylum. Seeing through walls to find enemies, maybe coupled with telescopic vision, would have been a much better use of this ability.

I suppose this is a rather small complaint though, seeing as the other abilities are decent enough. Superman can lift just about anything smaller than a tractor-trailer, and even use a post like a baseball bat.  Flight is a good method of transportation, but not particularly fun. Heat vision, super breath, and freeze breath all came in rather handy, and were quite fun to abuse. Freezing the citizens of Metropolis, blowing away their cars, or even burning “lol” into the street, was pretty much the only fun I had.

You can take this how you wish, but this game looks like a PS2 title, a good one, but nonetheless a PS2 title. Normally I could live with this, but unfortunately it’s horribly bland as well. Nothing seems to have a texture, every model is far too simplistic, and the animations feel stiff. I understand that this game was for two different console generations, so they had to make some concessions, but that’s not an excuse for poor design. These kind of problems might have been acceptable in the Playstation 2 era, but not for the HD generation.

I’m not very familiar with Superman lore, but if this game is any indication (and I hope it isn’t), then I’m not interested in learning. You start the game, travelling far out into the galaxy, in search of your home world, Krypton. Unfortunately on your way back to earth, you’re capture by Mongul, dictator of Warworld, a gladiator tournament. This portion of the game acts as a tutorial for the combat of Superman Returns. After Warworld, I completely lost track of the story. I know it had something to do with Lex Luthor, but it wasn’t very clear. The story felt more like a reason they could fit in the villains of the game, rather than a tale that could have been ripped straight from the comics. 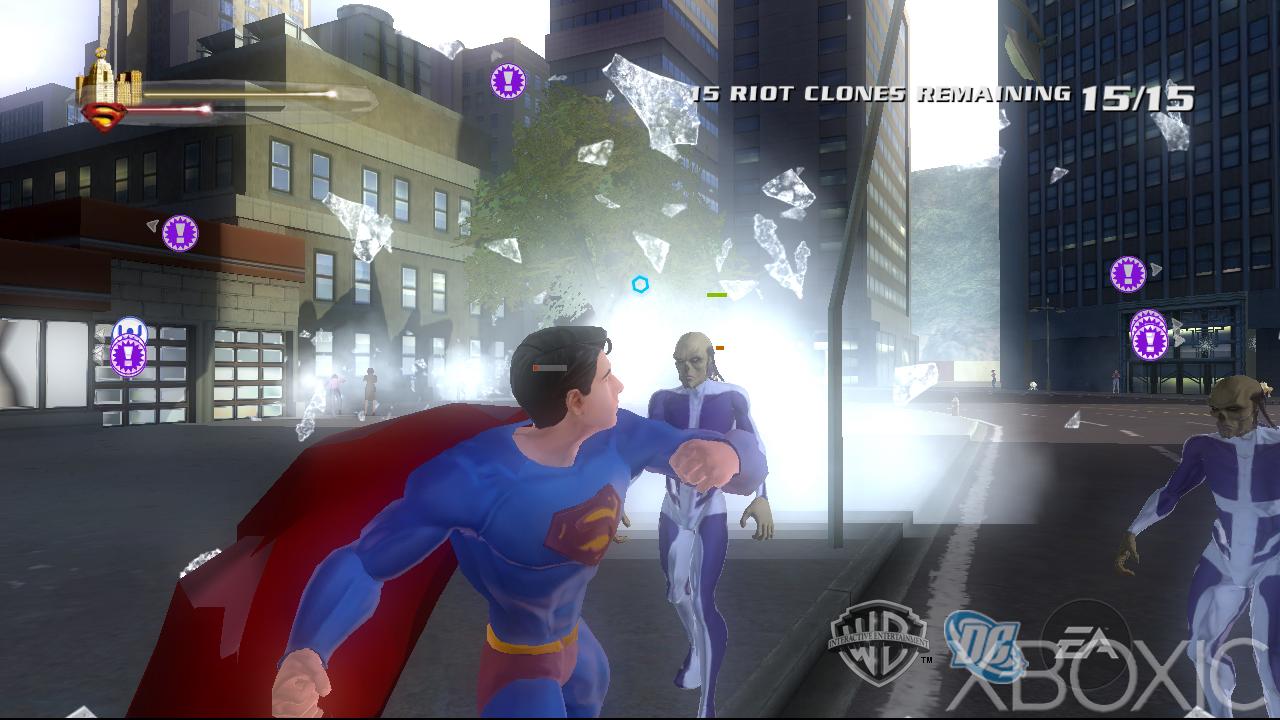 At least the sound was ripped straight from the movie though. Nearly the entire cast from the movie reprise their roles as: Superman/Clark Kent, Lex Luthor, Lois Lane, Kitty Kowalski, and Jimmy Olsen. I’m sure most people will be happy to hear they managed to get the original cast for this game, but I feel they gave poor performances. Their lines felt generic and devoid of emotion, not quite robotic, but certainly not how a normal person would talk. However, I did find one exception; I’m not entirely sure if it was intentional, but Lex Luthor’s personality was so over-the-top, it was genuinely hilarious. That is, in a horribly cheesy, weird kind of way. Everything he did was overly sinister and campy, reminding me of the old 60’s Batman villains I love so much.

But I certainly don’t love the controls, because I can’t fully explain them. They’re complicated, stiff, and have an irritating amount of lag. The odd part is that the button mapping itself is fine, but there seems to be a delay between pressing the button and the action. This problem is especially apparent in combat, where it felt like an eternity between punches. This is annoying, but since the game isn’t very fast paced, it’s tolerable. Everything else is far more responsive, although it still takes a little getting used to.

It honestly surprised me when I noticed this game was rated T for Teen, since this game only contains cartoon violence. What surprised me even more was when I saw it was rated M for Mature in Australia. I’ve seen far more violent games that are rated E for Everyone. The majority of enemies you encounter are non-human (mostly beasts and robots) and merely faint before they disappear. I did encounter one human enemy, but he still simply fainted. I suppose the majority of the violence in this game comes from unintended sources. Things like: forcing people off buildings, causing car wrecks, burning rude things into the street using heat vision, and attacking or freezing people and their cars. The citizens will never die from these things, but it’s still pretty violent.

This certainly isn’t the worst game I’ve ever played (that award belongs to Ninjabread Man). I even had some fun while playing this game, but it wasn’t for the correct reasons. I had fun because I was willing to be a jerk, something that would be okay in Saints Row or GTA, but not Superman. I should care about the inhabitants of Metropolis, but I don’t. Every once in a while I still show this game to a friend, just to see their reaction, and that’s really the only reason I would recommend this title. Superman Returns is a missed opportunity, a chance for greatness soured by a short development cycle, and only useful as a gag because the developer decided to add some amusing cheats.

If you still would like to try this game, I recommend this page.