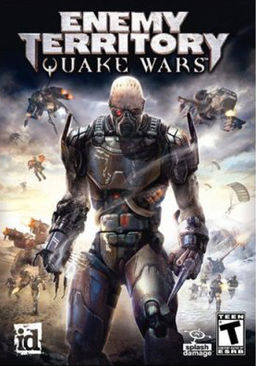 Developed by Splash Damage and published by id Software, Enemy Territory: Quake Wars (shortened to Quake Wars) is an interesting spin-off of the popular arena shooter series Quake. This title takes the fast-paced action of Quake and combines it with more strategic elements similar to Battlefield’s. The game was originally made for PC and later ported over to the Xbox 360 by Nerve Software. The game includes twelve maps, five character classes and twelve vehicles. (Please note that there are differences between versions and this review is based on the Xbox 360 version.)

I was skeptical going into this game; I just couldn’t see how such a fast-paced series as Quake could be combined with more methodical objective-based gameplay. I wasn’t surprised when my intuition turned out to be well-founded, and although the title isn’t horrible, I found that there were many problems and annoyances throughout the entire game.

You begin a round by picking a faction and one of the five classes, then start either defending an objective or attacking the enemy’s objective, depending on which team you’re currently on. This is where the problems start. A core dynamic of objective-based games/modes is the give-and-take between the two teams, and when that is removed, things get repetitive. It may be fun to attack or defend for awhile, but some rounds can last up to thirty minutes! There were many times I wanted to make a strong offensive while on defense, but I couldn’t because there was nothing I could attack. This doesn’t ruin the game, but it certainly doesn’t help it. 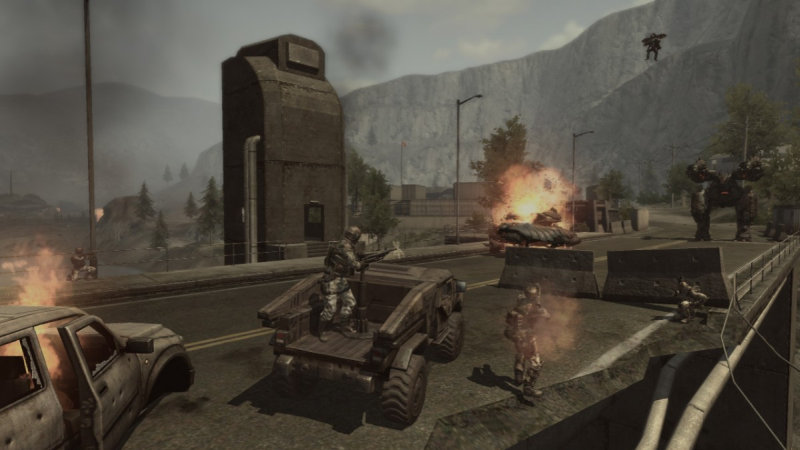 The one thing that helped break up the monotony was the ability to choose which team you’re on. Now, in other games, this would be an unimportant decision; but in Quake Wars each team has different advantages and disadvantages which make the game more interesting. You see, the GDF (Humans) play much like any other shooter, but the Strogg (Aliens) are a bit more unorthodox. Their weapons will overheat but don’t need to be reloaded, they use a substance called stroyent for both health and ammo, and their vehicles are all different. For instance, while the GDF use ATV’s, the Strogg have jetpacks, and instead of an APC (Armored Personnel Carrier), they have a massive walker. It almost reminds me of Command & Conquer: different yet equal teams battling it out for control of the battlefield.

The five classes are Soldier, Medic, Engineer, Field Ops, and Covert Ops. Both the GDF and Strogg use the same classes, though the Strogg classes are renamed to Aggressor, Technician, Constructor, Oppressor, and Infiltrator, respectively. The Soldier is the jack-of-all trades; they can use the most weapons, plant bombs, and start with a stronger secondary weapon. Medics are the doctors; they can distribute health and revive fallen players. Engineers are the builders; not only can they fix vehicles and place mines, they can call in anti-vehicle and personnel turrets. Field Ops is the radio operator; they can order three types of artillery and an airstrike. Finally, the Covert Ops is the spy; they have access to the sniper rifle, can disguise themselves, and can set up radar towers. They’re all basic stereotypes, but they are diverse and work well together.

What doesn’t work well together though, are the colors. I would have done anything to see a splash of color in this game; the entire game is composed of faded and dull colors. I understand that this is a warzone, but there were so many opportunities to add color to the landscape. They could have made the sky bluer, add in a bit more sun, or even make the trees a brighter shade of green. It nearly put me to sleep, staring at dull colors for so long. 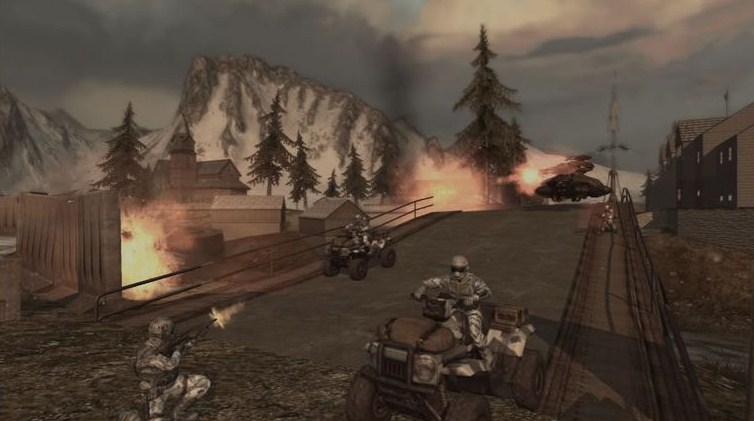 Thankfully, the designs of the vehicles and characters don’t suffer as much. The vehicles were all designed and animated beautifully. I especially liked how the springs on land vehicles reacted when going over a bump and how the Strogg tank hovered instead of rolling. Even though the characters don’t fare quite as well as the vehicles, I was still impressed by some of the models. Unfortunately, it certainly wasn’t the GDF models that impressed me, as they were somewhat bland. But I loved the incredibly interesting Strogg designs (even though they are somewhat disturbing). They’re a mix of flesh and technology, a species made for war, similar to the Borg from Star Trek and perfect as the antagonists for this game.

It’s just unfortunate the story isn’t similar to Star Trek as well, because it feels like someone spent five minutes coming up with it as an excuse to add more achievements. What’s worse is that the premise is actually a decent idea. The Strogg are a war-mongering species, concerned with only one thing, energy, and are willing destroy anything that gets in their way. Now, I normally wouldn’t mind this since this type of game tends to be light on story anyway (it is an online focused game after all), but the game actually does include four campaigns. However, these campaigns are composed of three AI bot matches in-a-row. No cutscenes, no extra dialogue, just an excuse to add achievements; talk about a missed opportunity.

The shooting controls are a beautiful mix of speed and familiarity. The two bumpers are used to switch between tools and weapons, X is for actions, and Y is to enter vehicles. In addition, you can jump and crouch with A and B as well as use the directional pad to look at the map, check the score, and to quick chat. I very much like that last one, because in the heat of battle, I can ask for ammo or health in a second. I can even order people to defend an objective or call for a vehicle. The only minor problem I had with the on-foot controls was the auto-aim. Or, the aim assist, as the game likes to call it. It was far too strong, constantly following enemies even if I removed my thumb from the control stick. Since it can be turned off, it doesn’t pose a problem. 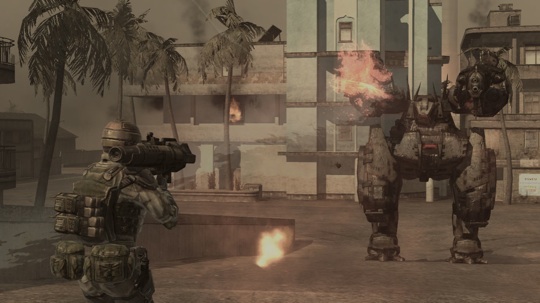 Vehicles do pose a problem though, and this one can’t be fixed. Most of the controls for the vehicles are stiff but workable, but the helicopters are unbearable. I tried all of the settings and still couldn’t get used to it. Granted, I’m not the best pilot in the world, but I’ve played my fair share of flying games and I’m a competent pilot. If I played for long enough I believe I could adjust to the controls, but I shouldn’t have to; controls should feel natural and these do not.

I’m not entirely sure what to say about the sounds from this game. Guns go bang; laser go pew. Everything sounds like it should, but nothing impressed me. The only thing that even stood out were the Strogg voices. They’re just so gruff and robotic, just right for a species as vicious as the Strogg.

After looking at the box art for this game I was expecting the usual list of descriptors (blood, gore, violence, language etc…), but was surprised when I only saw mild language and violence. Violence was about as intense as I expected (people being shot/blow up), and the only language I found was a bot that’s name contained “crap”. I assume there must be more language, but since I can’t find it, I can’t talk about it. The only other thing I found were the Strogg designs; they’re creepy. You probably already know this from looking at the box art though, and you can decide for yourself if you’ll be bothered by this. (I’ve since discovered that the pc version does have blood; however, this is absent from the console versions.)

Please don’t think I hated this game, I still had some fun despite its problems, but there are just too many problems to justify recommending this game. I’ve been told that this port is vastly inferior to the PC version, and I’m going to have to believe it. There are some good ideas, but there are so many flaws as well. If this game sounds like fun, I would recommend buying the PC version; because from what I’ve seen, it fixes almost all of my complaints. Leave this version where it belongs, in the bargain bin.