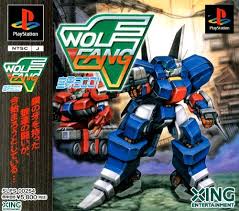 Wolf Fang was originally released in 1991 as an arcade game titled Rohga: Armor Force outside of Japan.  In Japan it was known as Wolf Fang: Kuhga 2001. Wolf Fang was ported to the original PlayStation in 1996 and to the Sega Saturn in 1997.  MonkeyPaw Games has since brought it to the PS3, PSP and the Vita.

While the conversations are in Japanese, the menu system and interface are in English.  The game is still very playable, but non-Japanese speakers won’t know the back story.  The goal in the game is to liberate Australia or New Zealand from an enemy group called Ragnarok.  Both their army and yours are using highly customized and powerful mechs.  Since there are multiple paths, there are multiple endings.   Since I can’t read Japanese I don’t know how good of an ending I got, but the people seemed to be happy. 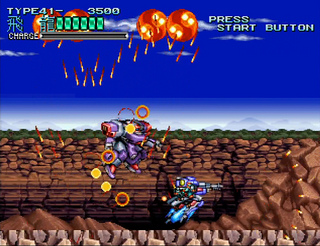 Wolf Fang is a gunner platformer game where you have to shoot down many enemies coming your way.  There are various robots, jets and mechs trying to destroy you.  Not surprisingly, a massive boss awaits you at the end of each stage.  If your mech takes too much damage, the pilot will be ejected buying you more time but less armor.  If enough power ups are collected a mech can be rebuilt, but I was never so lucky.

There are four pre-configured mech templates, but you can customize your own with various arms (melee weapons), legs (speed and jumping), weapons, and bodies (special weapons).  Overall there are sixty-four different possibilities.  When you die, you can change your mech configuaration upon respawning.  True to arcade form, you can continue as much as you like; I’m just thankful I don’t have to pay a quarter each time. 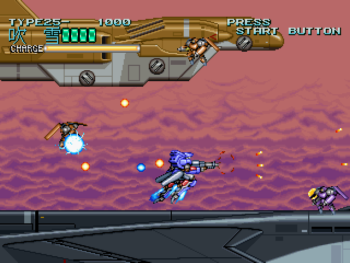 Given the unlimited continues I was able to beat this short game in two sittings.  I left it suspended on my Vita and beat it after resuming it.  Playing both paths won’t take more than a couple of hours.  If you play this game on a PS3, a second player can join in on the run and gun action.

Taking down mechanical enemies is fun with energy swords, laser guns, grenade launchers, and flame launchers.   Violence is a given, but given the games age and style I’d say this is okay for kids to play.

The graphics are dated but colorful.  The bosses are big and break down to smaller versions as you kick their metallic butts.   You can tell you’re doing damage to an enemy when they flicker pink as you strike them.

Wolf Fang is action packed and bound to please any gamers who like mech or platformer shooters.  The $5.99 asking price is reasonable and despite the Japanese conversations this game is still very playable.  I still wish I knew what they were saying though…