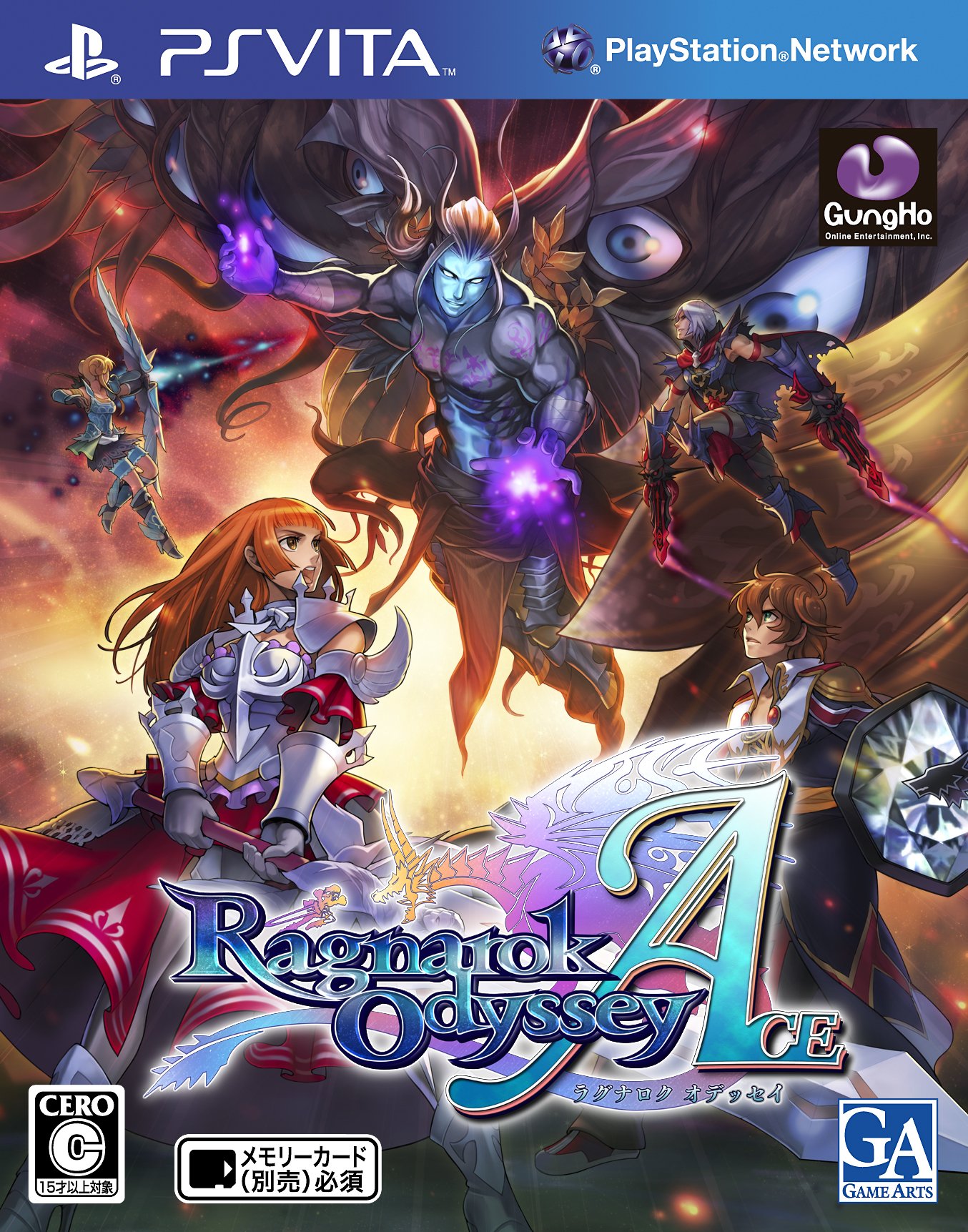 Ragnarok Odyssey came out for the Vita in 2012.  While not perfect, it sure had a lot of eye candy and is one of the better looking Vita games.  Ragnarok Odyssey ACE adds many new features to Ragnarok Odyssey and is now playable on the PlayStation 3.  The save files between the PS3 and Vita versions are transferrable.  Owners of the previous game can import their save (minus the weapon) to ACE.

Because much of the content from Ragnarok Odyssey is re-used, I do not recommend people to buy this game a second time.  For those who have not purchased Ragnarok Odyssey, the ACE version is hands down better in many ways.  The ability to hire mercenaries to aid you in the single player campaign tops my list of improvements.  While the AI is helpful, they are not as good as human allies when it comes to attacking a boss’s weak spots.

Like many online games, lag can be quite a problem, especially in boss battles!  You can see connection bars of the rooms and players in it, but those gauges tend to fluctuate.  All it takes is one party member to lag and ruin the fun for everyone.  Sometimes the slow player is dropped and the problem is resolved, but other times the game errors out, and drops you back into single-player mode. 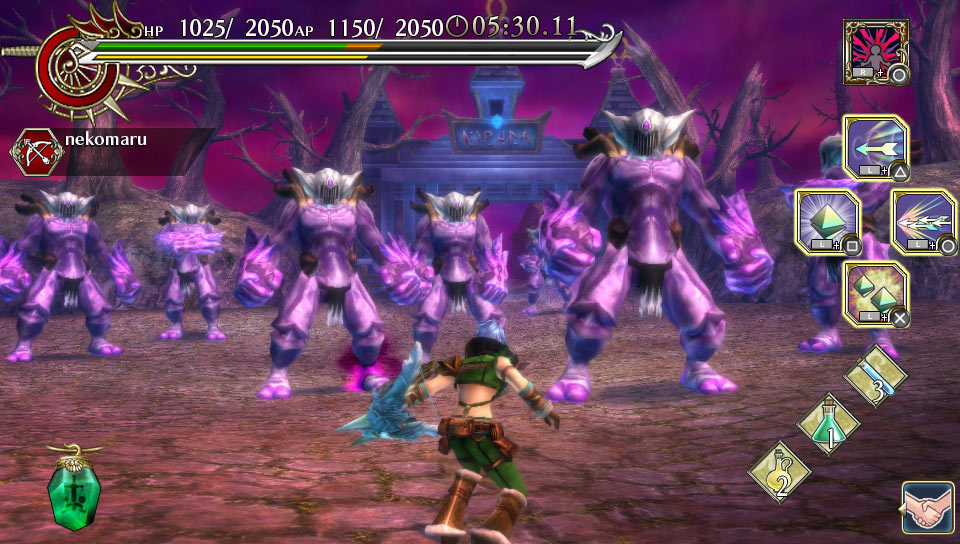 Strong Points: Many improvements over Ragnarok Odyssey including ACE abilities, mercenaries for hire in single-player
Weak Points: Not worth buying again if you already own Ragnarok Odyssey since it has the same repetitive quests
Moral Warnings: Violence, language, revealing outfits, and drinking

The story is identical to Ragnarok Odyssey with the addition of a new area after you complete the single-player campaign.  You’re still a new mercenary recruit and have to prove your worth to your peers by completing quests.  The quests are mostly monster or item related: kill X number of monsters or bring back X number of items.   The ACE quests have a little more variety and gives you challenges to knock back or kill a certain number of monster within a limited amount of time.  Halomonas weapons for each character class are another new addition to ACE.  These weapons are customizable and can be upgraded by completing fetch and kill quests.

Just like the original game, you do not gain experience or levels by killing enemies.  You rank up after completing a chapter in the game.  There are ten chapters total and nine of them are story related.  The last chapter has optional quests that you can unlock though the main story line.  There are roughly ten quests in a chapter and they typically end with a boss battle.  Some chapters have multiple boss battles woven into them.

After completing the main story line, ACE's Yggdrasil Tower and trading features become available.  Yggdrasil Tower offers random monster and quests for a better gaming experience.  I just wish this was available without having to beat the story all over again after importing my previous save file.  While the quests and story line are dull, the fighting is still fun.

The boss battles and fighting in general is epic.  The bosses are tough and pack quite a punch.  Even with their strength and might, they typically have a weak spot or two.  I found it funny that one ape like boss’ weakness was attacking him in the “rear.”  The battles with standard fare such as giants, orcs, wolves and bears are entertaining to watch with the dramatic Matrix-style attack moves. 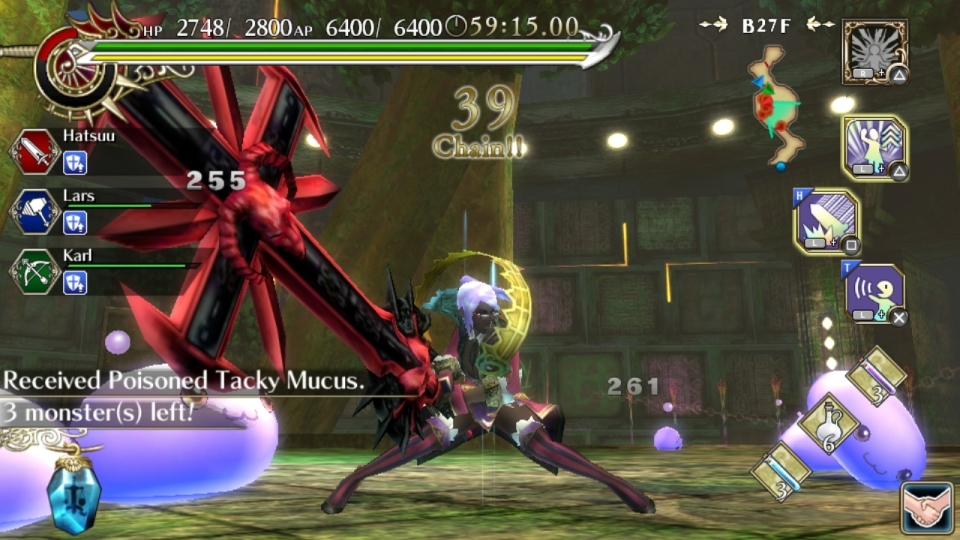 The new ACE abilities help out greatly in taking down a boss quickly.  Speed is important since the quests are all timed.  Each class has unique weapons, clothing, and ACE abilities assigned to them. Unfortunately, the camera angling annoyances carry over from Ragnarok Odyssey.  Since this is a third person game you would assume that the camera would be on your back the whole time.  Not so.  You have to use the right nub on the Vita to control the camera and it can get rather annoying constantly changing your view in the boss battles.

Audio wise, Ragnarok Odyssey ACE is pretty much the same.  New dungeons like Yggdrasil Tower feature a song composed by Nobuo Uematsu.  (The man behind many great Final Fantasy songs!)  While the new dungeon music was great, the new shop music he composed has a completely different style to it.  I don't think it fits very well with the original theme.  The game's twenty-five track soundtrack comes with the  physical Vita version of the game.

From an appropriateness standpoint, Ragnarok Odyssey Ace hasn't changed at all.  The cussing filter is over sensitive in the online mode, but the single player campaign has the s word in it. Go figure.  Some of the available outfits for female characters are a bit revealing.  Violence is a given and there is some alcohol.

While Ragnarok Odyssey ACE offers many improvements, I don’t believe it’s worth buying again for existing Ragnarok Odyssey owners.  The added features are great, but the game is still flawed by repetitive quests.  The online gameplay is still fun for those who like to take on giant bosses with friends.  It’s great that PS3 owners get to join in on the action now too.