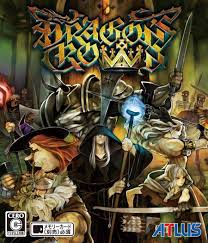 The Kingdom of Hydeland is in turmoil as the king has gone missing. To make matters worse, magic users have been seeking out a legendary artifact called the dragon's crown to awaken the ancient dragon.  With monster attacks on the rise, the adventurer's guild and royal family have plenty of tasks for you to complete.   Are you up to the challenge?

When you first start the game you will have to choose your character class. Since some are easier to play than others, the game recommends starting off with a brawny class like the amazon, warrior or dwarf.  You can also choose the sorceress, mage, or ranger.  Each class has unique abilities, fighting styles and equipment.  As you fight and gain experience you will also earn skill points that can be assigned to common or class specific abilities.

Some of the abilities include new attack moves, more health, or inventory space.  Dragon's Crown combines the action of 2D side scrolling brawlers with the allure of finding hidden treasures deep within dungeons and towers.  While there are only ten areas, there are multiple paths with a boss waiting at the end of each of them.  I like the humor of this game as one of the boss' is from Monty Python and the Holy Grail. 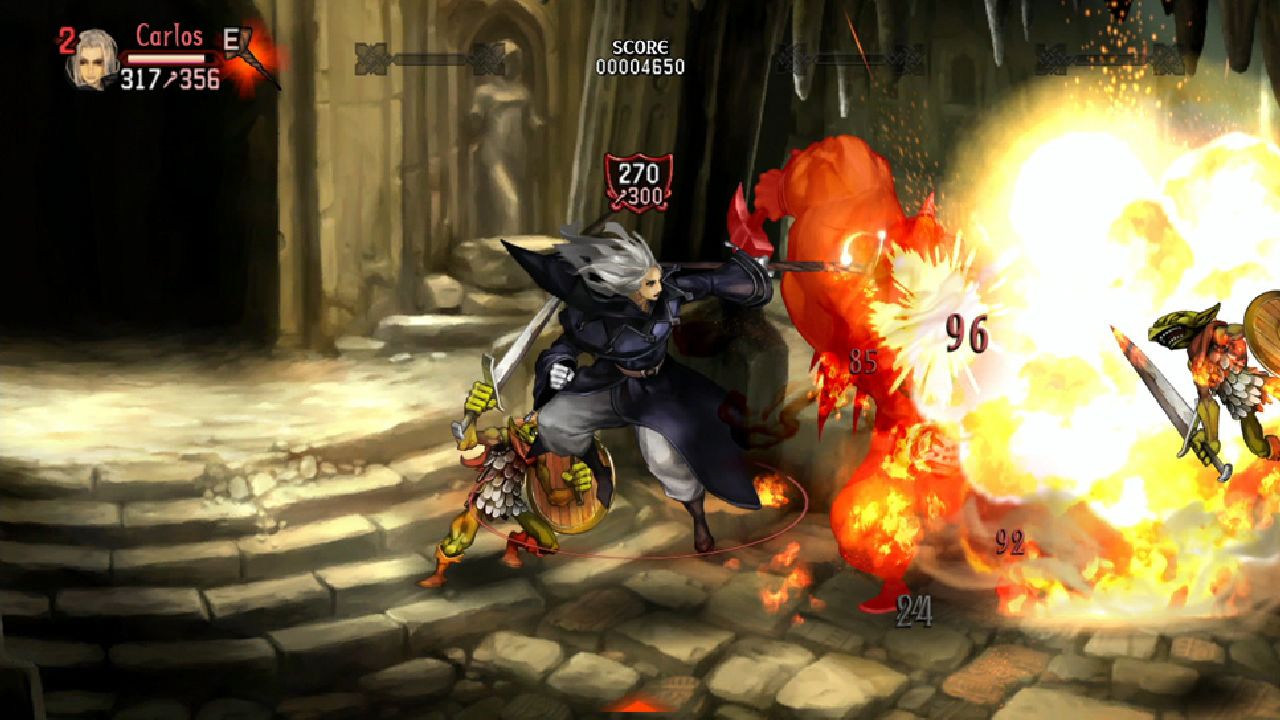 Strong Points: Fun combination of brawler and dungeon crawler gameplay.
Weak Points: Multiplayer is not available until the initial single player quests are completed.
Moral Warnings: Like many RPGs there is violence and magic use. The female characters in this game suffer from abnormally large breasts, thighs, and buttocks.  They are also dressed so provocatively that a sneeze could cause a wardrobe malfunction.  The males of course are adequately covered and are without delusional enhancements.

As you accept quests and explore new areas you encounter many enemies including orcs, vampires, lizard men, skeletons, evil mages and of course dragons.  They often drop coins after their demise.  There are also treasure chests and bones of fallen adventurers to be looted.  You can either revive the bones to get a NPC party member or you can bury them for a random treasure.

The first few quests are solo as you learn the game mechanics and prove your worth to the adventurer's guild and royal family.  Once you're at the point of collecting the nine talisman to battle the ancient dragon, you can play alongside NPCs, local friends, or random people online.  The boss' hit points go up the bigger the party is.  Some of the bosses I fought solo to make it easier on myself.  Some of the adventurer's guild quests require you to fight on your own as well. To do that you must disable joining.  If you have join enabled and are on the network, online players may hop into your party at any time.  It should come as no surprise that in order to play online, your system has to have the current firmware.

I never had any trouble finding anyone online to play with.  There is no chat and the only way to interact is you use your hand pointer.  When there are multiple dungeon paths, the majority vote wins.   Joining a random game is always fun and if the other players are higher level you may get even better loot.  I once picked up the bones of a level 99 adventurer; I didn't have the 999,999 gold to revive them though.

Gold comes and goes in this game pretty fast.  After you raid a dungeon you can either appraise (for a price) or just sell an item outright.  You cannot use an item until it has been appraised though.  Fortunately each item is assigned a rank form E (worst) to S (best) so anything C or lower I typically sold without bothering to appraise it.  As your character takes damage their equipment deteriorates or breaks altogether.  If you're carrying multiple bags of items you can switch equipment at the dungeon crossroads.   Anything damaged or broken can be repaired in town for a price. 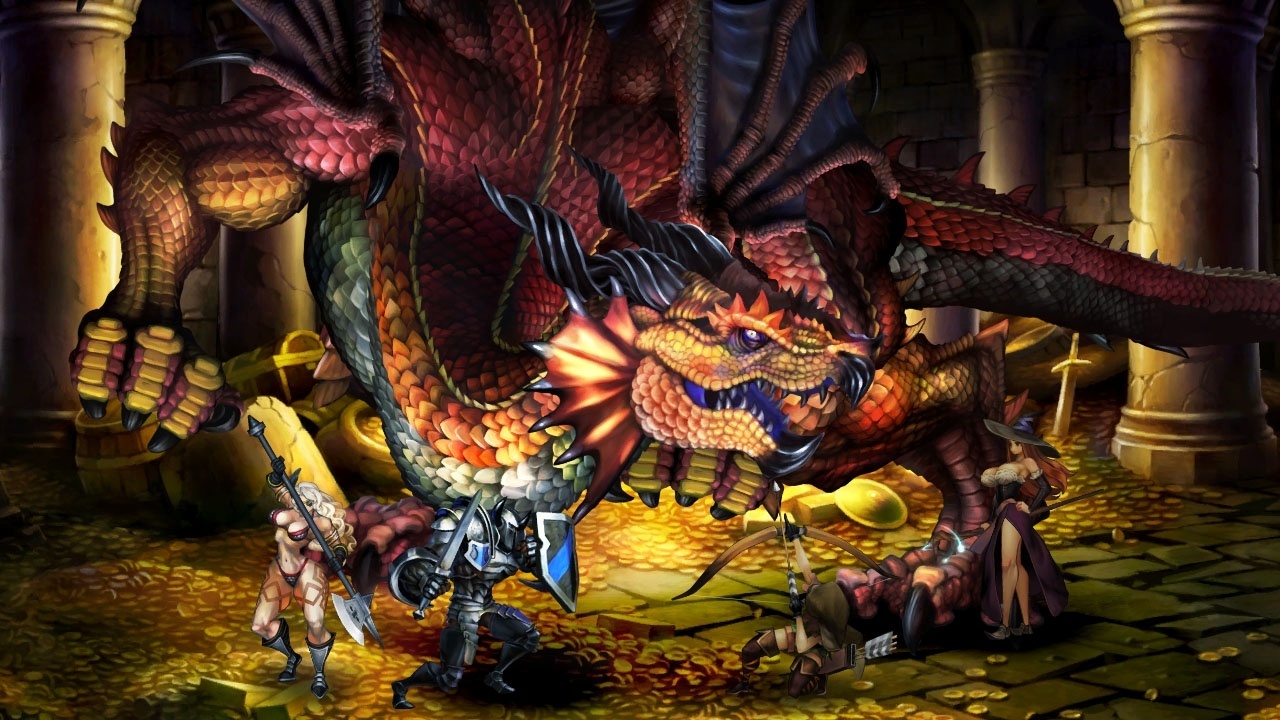 Magic runes play a big part of this game no matter what class you play as.  There are rune markings on many of the dungeon walls and if you combine those with the runes your purchase, you can conjure up temporary weapons, buffs, hidden treasure, healing circles or an extra life.   You start off with three lives with the option to pay and pray for an extra one at the temple.  When those lives are exhausted, you can pay again and again until you can no longer afford the increasing revival rates.  When you're out of money and lives you're taken back into town and revived by a friend.

Violence and magic use is a given in role playing games.  What surprised me with these titles was the blatant sexualizing of females.  The Amazon warrior I played was incredibly buffed with thunder thighs and a thong suit.  I mean who would seriously fight an ancient dragon wearing a thong bikini?  The sorceress was even worse with her double J bust size and a lace dress that was extremely low cut.  It gets even worse.  In the dungeons I encountered a mermaid with a human buttocks, a wounded female monk warrior spread eagle with her chastity belt holes exposed, and lastly, a bound attractive female spirit wearing a thin semi transparent outfit.  This artwork was extremely one sided; granted the warrior and dwarf classes were muscular like the Amazon warrior, but their groin area was realistic and not jiggling as they walked.

It's a real shame since the 2D artwork in this game is incredibly detailed and well done.  Unfortunately, they put too much detail into the females.  I would not recommend this game to anybody who is struggling with pornography or lust.  The sound and voice acting is top notch as well.  The gameplay is solid and had it not been for the sexual fantasy art, I would recommend this game to any RPG or brawler gamer out there.